A mother has revealed her heartbreak at not being able to hold her newborn daughter after giving birth while battling coronavirus.

Florette Johnson, from Florida, was forced to FaceTime her daughter while she stayed on a ventilator to fight for her life.

The new mother said she went into hospital on April 4 with a persistent cough and difficulty breathing.

When she got to the hospital, she was told she had pneumonia and she then tested positive for Covid-19.

Florette Johnson, from Florida, was forced to FaceTime her daughter while she stayed on a ventilator to fight for her life. She is pictured in hospital

Writing on Facebook, she said: ‘I didn’t know how serious this was. They brought me up to labor and delivery, then moved me to another section due to fear of the virus. Next day I went into labor.’

Although Florette was desperate to avoid a Cesarean her poor health forced her to consider.

She continued: ‘My oxygen was dropping. Every time I took a breath in, I would cough over and over.

‘I was taken back to labor and delivery, due to my breathing i was prepped me for a c-section, at this time I was already 10cm.’

But while she was being prepared for the operation, she felt a contraction and pushed.

‘I closed my eyes and asked God for the breath and strength to push, the doctor was shocked. 30 minutes later, my Angel was born’ she said. 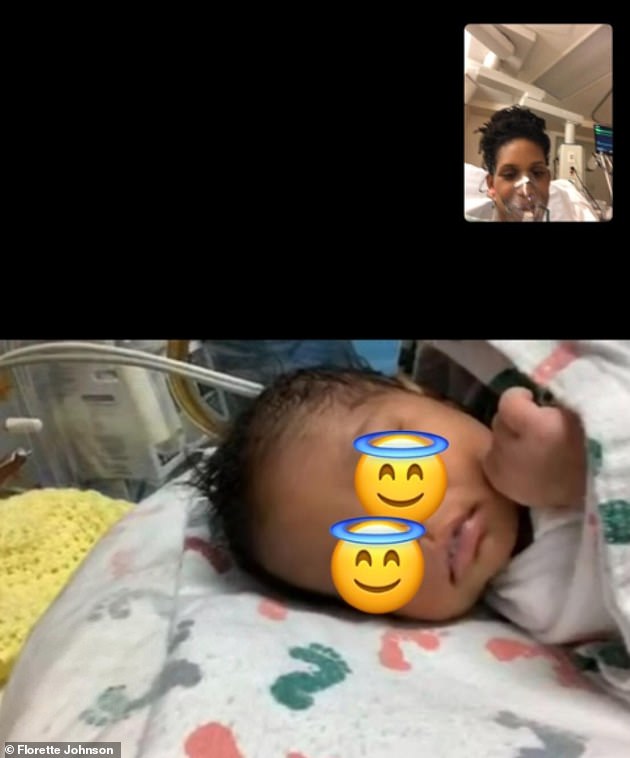 Florette had to FaceTime her daughter, with a NICU nurse holding her phone, as she couldn’t hold her child

‘They immediately took her away. I did not get to see her clearly or touch her. The doctor called for help because my breathing became worse.

She revealed she had to then interact with her newborn over FaceTime, for fear of spreading the virus.

‘The doctor called for help because my breathing became worse. She and three others rushed me to ICU.

‘When I get there they took all kinds of tests. My coughing got even worse. Only way I able to see my baby is FaceTime with the NICU nurse.

Medics then told Florette she was unlikely to survive . 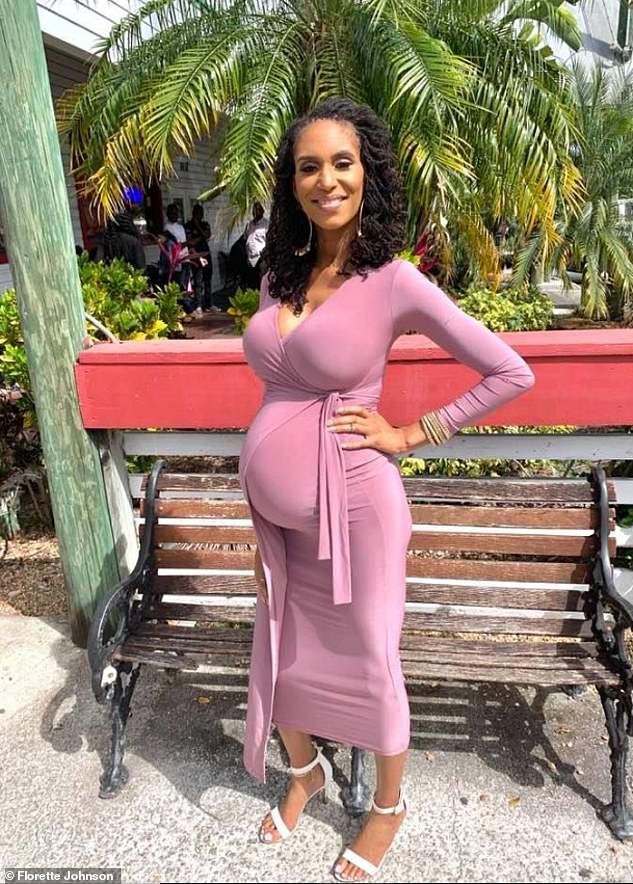 Florette is pictured at 36 weeks pregnant, happy and healthy. But contracting Covid-19 forced her into labor

‘My RN [registered nurse] came in my room and put a chair beside me with tears in her eyes told me in other words that I was dying.

‘My oxygen was lower than 60 and getting worse, the pneumonia took over my lungs.

‘She asked did I want to call anyone. So I asked her to call my husband.

‘The nurse shared the bad news with him and brought the option of the ventilator that it will buy me some time and help.

Florette then had three-way call with her mother, and husband who was with her other children.

Florette is pictured early in her pregnancy. In a Facebook post, she thanked her friends and family for praying for her 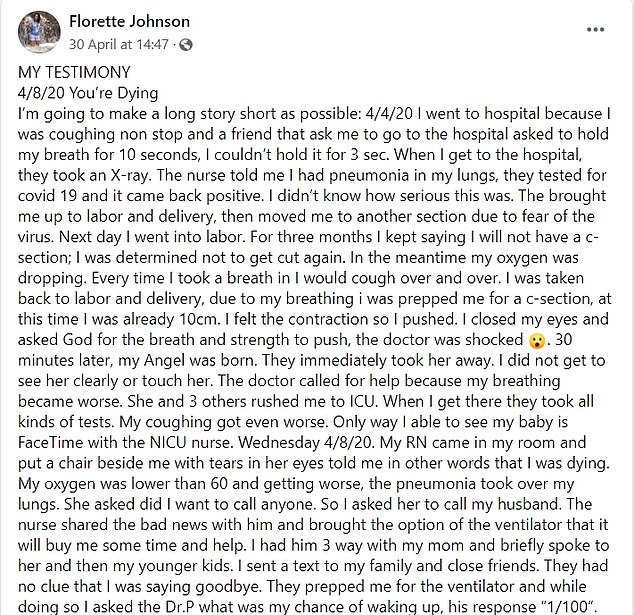 She then sent a text to her family a friends, but explained that they didn’t know she was saying goodbye.

‘They prepped me for the ventilator and while doing so I asked the Dr.P what was my chance of waking up, his response “1/100″‘ she said.

Florette then fell into a coma, but miraculously survived.

‘I was put under Wednesday and woke up Monday.

‘God allowed me to still be here. In that time I can’t tell you how many people were on their knees praying. I want to thank EVERYONE that prayed for me and my family.