A mom is suing a Californian school for allegedly spending weeks encouraging her fifth-grade daughter to transition to a male – including changing her name and pronouns’ – after she said she ‘felt like a boy’.

Single mother-of-two Aurora Regino said she was ‘appalled’ that a guidance counselor at Sierra View Elementary School in Chico had not informed her of the advice they were giving her child.

She claims a ‘Parental Secrecy Policy’ from California’s Assembly Bill 1226 – a 2013 law that extended protections to transgender individuals in schools – meant she was not told about the discussions.

Chico Unified School District in California denies they have such a policy in place.

Ms Regino said that her daughter – referred to only as AS in the lawsuit – had been seeing guidance counselor Mandi Robertson in early 2022 due to the death of her grandfather.

One day the girl confessed to the counselor she ‘felt like a boy’. According to her mother, the Ms Robertson affirmed her feelings ‘that very day’ and ‘within minutes’.

The daughter was allegedly ‘unsure’ whether she wanted a male name or pronouns but felt ‘pressured’ by Robertson to adopt them.

Ms Regino said that her daughter even wanted to tell her what was happening but that the school told her to ‘come out’ to other people first, meaning the mother was not informed.

The lawsuit says she did not ‘fully understand what was happening’ but began to be known by a male name at school while still being addressed as female at home – which eventually led to her wanting to change schools.

The counselor began to encourage discussions of ‘sexuality and gender identity’ between classmates over the following weeks, including how to cope with feeling like being in a different gender, according to the lawsuit.

But the lawsuit states that the 14th amendment means Regino should be able to direct the upbringing of her child and be involved in decision-making about her education – something that it accuses the school of denying her.

It says: ‘By socially transitioning AS without informing Ms Regino or obtaining her consent, the District violated Ms Regino’s fundamental right to direct the upbringing of her child’. 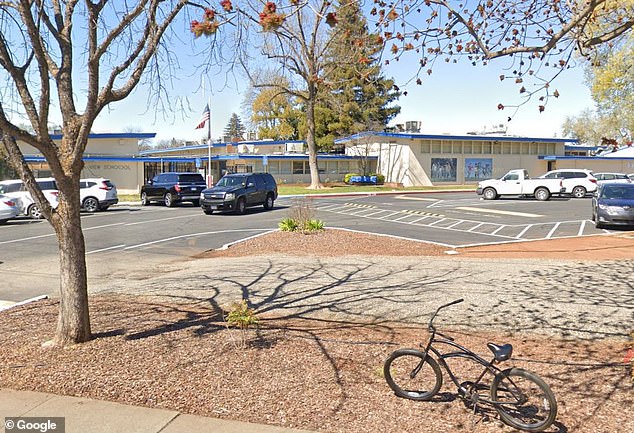 Eventually the girl told her grandmother, who told Aurora – and she contacted the principal of the school immediately.

In April 2022 Ted Sullivan the District’s Director of Elementary Education Ted Sullivan told Ms Regino that Californian law requires schools to socially transition students without telling their parents, unless the student authorizes them to do so.

Ms Regino was keen to affirm that she is supportive of her child and any identity she chooses – but has taken issue with the fact she was not informed first by the school.

She said she wanted daughter to be ‘happy and healthy in whatever identity’ she chooses but added she would have requested that she see a mental health professional due to her young age and the quick onset of these feelings.

‘AS’ now identifies as female again and her mother said the confusion was only brought about by other stresses in her life at the time, for which she now attends private therapy.

Both her two daughters still attend schools in the district – although AS now attends Marsh Junior High.

The district is a public school in Chico and operates 23 schools – twelve elementary, four junior high, three high schools and four others.

Ms Regino says she filed the lawsuit against the district on January 6.

Chico District denies having a ‘Parental Secrecy Policy’ in place but does not deny that the mom was not informed of the discussions with her daughter.

It comes after a Virginia school district required all teachers to complete training program that says that children of all ages – including pre-school – can request to be addressed by different names and pronouns without their parents’ permission.

Fairfax County Public Schools – a school district that has made headlines for woke policies and clashes over teaching critical race theory – started the program ‘Supporting Gender Expansive and Transgender Youth’ on July 22. 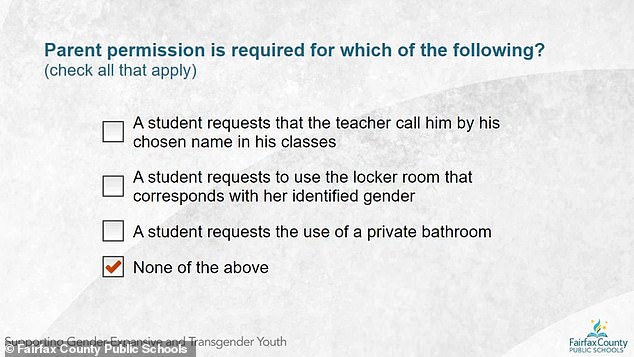 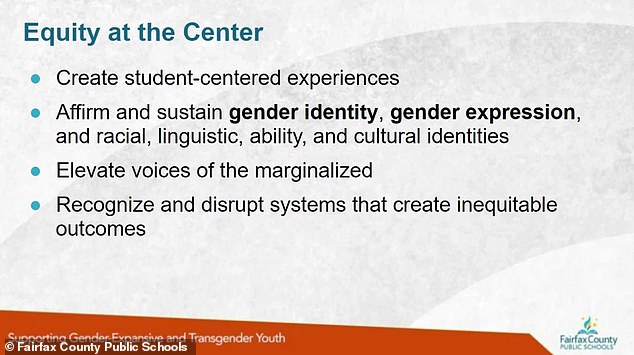 The slides, which were shown at the training on July 22, say teachers must ‘create student centered experiences’ and ‘affirm and sustain gender identity, gender expression, and racial, linguistic, ability, and cultural identities’ 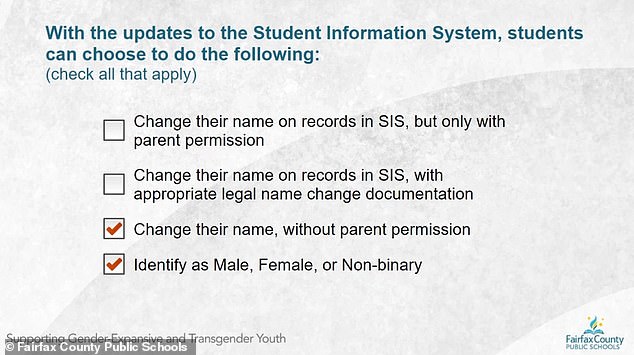 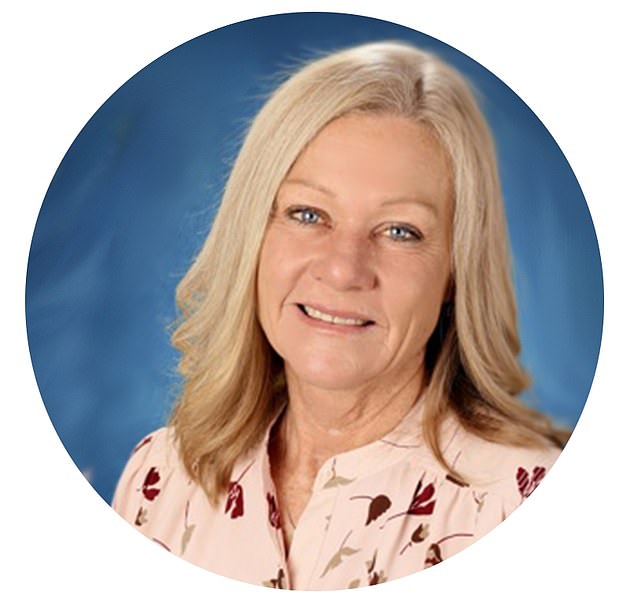 The training details requests students can make without parental permission, according to materials obtained by the Washington Examiner.

These requests include asking to be called ‘by his chosen name in class,’ requests to use ‘a private bathroom’ and ‘requests to use the locker room that corresponds with her identified gender.’

The slides also inform teachers on how to respond to students who express a desire to be addressed by a new name or pronoun.

Chico Unified School District Superintendent Kelly Staley disputed several of the recent lawsuit’s claims in a message to the community on January 13.

The statement said: ‘While our legal counsel is currently reviewing the lawsuit, we can address the article’s headline and assure our community that Chico Unified does not have a “Parental Secrecy Policy”, nor do we ever try to change a student’s individual identity.

‘As you know, Chico Unified continues to focus on family engagement and works hard to maintain open and transparent communication. We highly value the relationships our families have built with their schools.’