A 20-year-old student was left in a life-threatening coma after falling from his 7-foot-high loft bed at an Atlanta university in January 2015.

Clark Jacobs fractured his skull, developed a brain bleed and suffered a stroke after the fall at his Kappa Sigma fraternity house at the Georgia Institute of Technology.

His mother, Mariellen Jacobs, is now on a mission to change the university’s policies regarding its unprotected beds.

Mariellen Jacobs pictured here with her son Clark Jacobs, who was left in a life-threatening coma after falling from his 7-foot-high loft bed at university 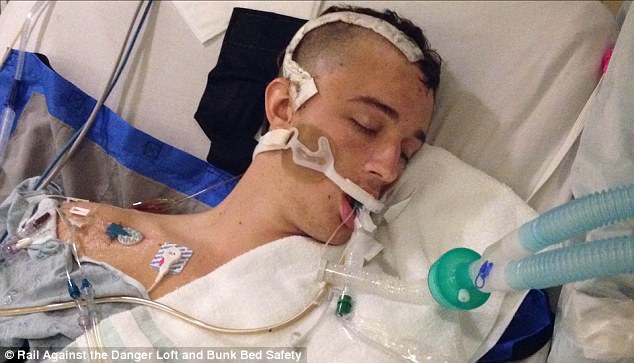 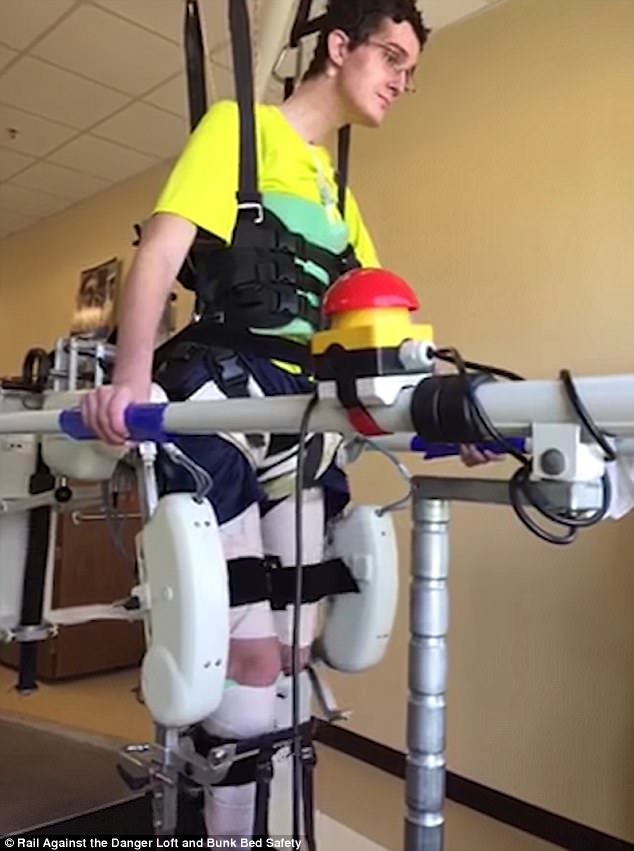 She shared her son’s story on social media in an attempt to educate his fellow peers and explain the dangers of beds with no rails.

Speaking to CBS the mother said: ‘It was horrible to watch. He was near death. The surgeon said he might not make it.’ 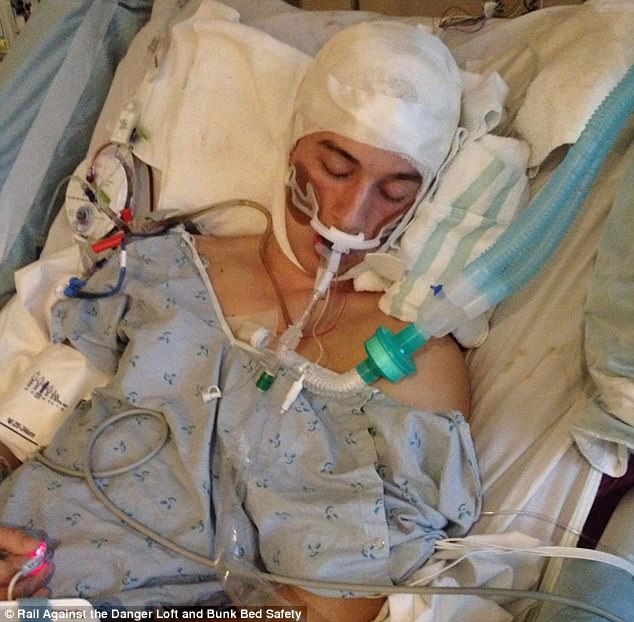 The fraternity student also developed a brain bleed. He is seen above in his hospital bed

She explained how she wanted to inform his fellow students about the incident as initially it was even something her son shrugged off.

Before the actual incident occurred, his mother said: ‘The beds were quite high off ground. I remember saying, “Shouldn’t we put something on there?” My son laughed, “I’m not going to roll off.” No one thinks that.’

Mariellen said she wanted to change the ‘stigma’ around the issue: ‘There’s a stigma associated with a rail on a bed. You think, I haven’t had that since I was four years old.’ 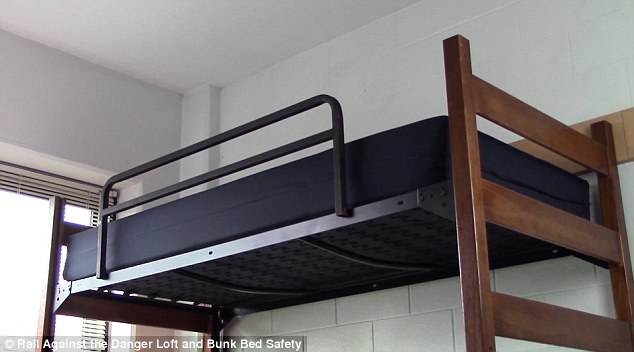 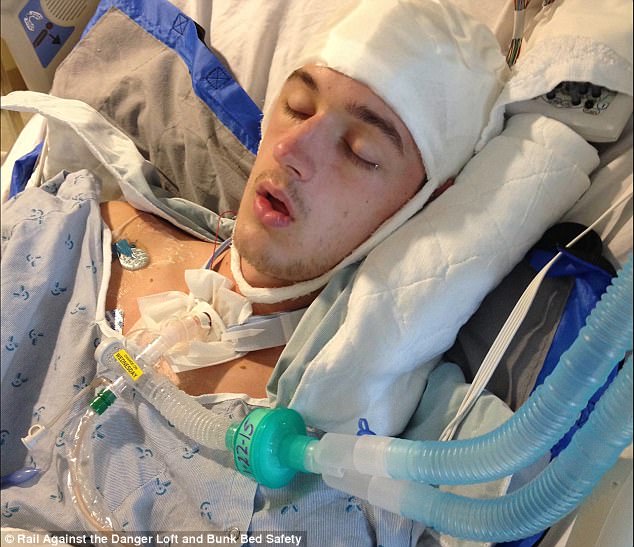 He suffered a stroke and ultimately went into a coma. Clark had to undergo physical therapy at the Shepard Center in Atlanta but has now returned to university after missing four semesters

‘Well, it’s not a childish thing. One single roll, one time and you’re out of that bed,’ she said.

She is now determined to change the policies at the university, hoping to see rails attached on every loft bed after she started the non-profit Rail Against the Danger.

Thanks to the non-profit the university will now provide rails. 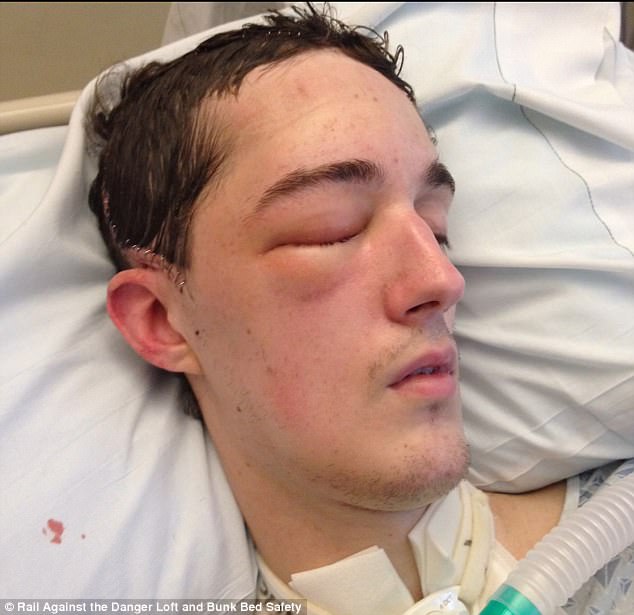 The college student experienced a series of injuries, pictured here with a black eye

In a statement on their official Rail Against The Danger website Mariellen wrote: ‘As of January 1, 2017 every public campus in our great state of Georgia will be required to supply rails, free of charge to any student who requests them.’

‘On top of that, two of our popular state colleges; Georgia State in Atlanta and Georgia College in Milledgeville, have already ordered and installed rails on their loft beds due to RAD’s efforts partnering with the University System of Georgia,’ she concluded.

Clark, who has since been nicknamed Superman, had to undergo physical therapy at the Shepard Center in Atlanta and learn how to walk again but has now returned to university after missing four semesters. 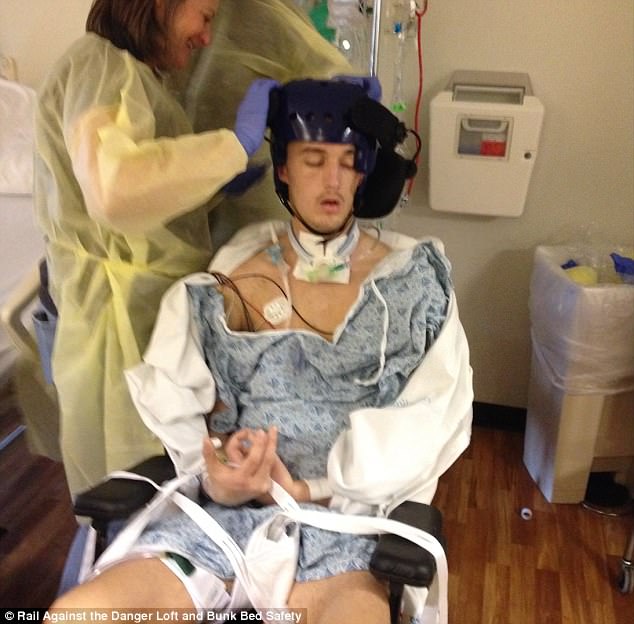 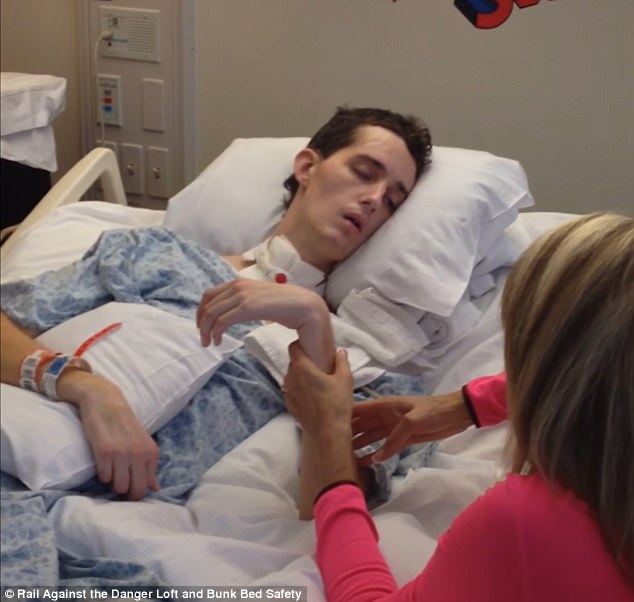