No tip? Take a chip! Moment a brazen UberEats driver is caught helping himself to a french fry after ringing his customer’s doorbell

A food delivery driver has been caught on camera helping himself to a meal while he waited for an unsuspecting customer to come to the door.

The sneaky UberEats employee was seen approaching a residential address and ringing the door bell before peeking inside the bag and removing a chip.

The video was captured by a friend of Hot Breakfast radio host Eddie McGuire, who told listeners he suspects deliverers often left his meals ‘feeling a little light’.

The worker was caught in the act in Melbourne at 6.20pm last Monday, leaving his victim so amused he contacted McGuire to share the footage.

‘This has been a bit of a common occurrence at my place where sometimes the Uber [Eats] comes in and you go “it’s a bit light”,’ McGuire said on Monday’s program.

‘Anyway, so a good friend of mine had the home security system going and he said “you need to come and have a look at this one, old pal”.’

In clear view of the security camera, the man chowed down on a sizable fry and proceeded to chew away while directly in front of the door. 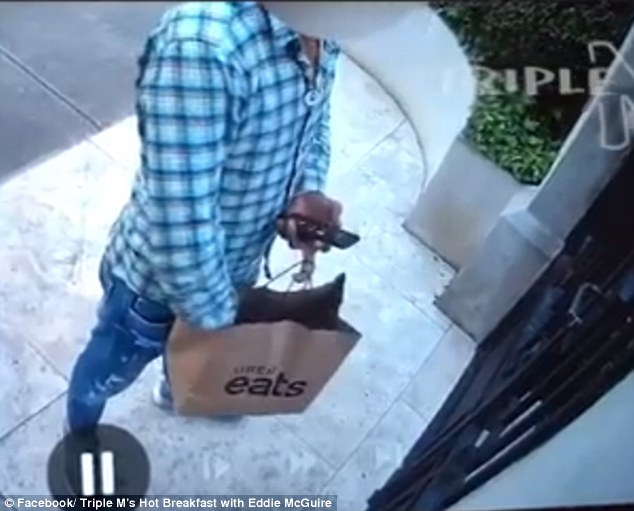 The worker was caught in the act last week in Melbourne at about 6.20pm on Monday – his victim so amused he contacted McGuire to share his findings

He managed to go undetected, with the customer’s arm emerging from the door to collect the order just moments later.

McGuire’s co-host Wil Anderson sided with the delivery man, stating the ‘poor guy’ wasn’t paid very well and ‘if you can’t get a tip, you’ve gotta get a chip’.

The incident struck a nerve with many people online, with some calling on the employee to be sacked and others saying it served customers right for ‘being lazy’.

Others thought the driver deserved to sneak the odd chip, as UberEats employees weren’t paid much and were rarely tipped by customers. 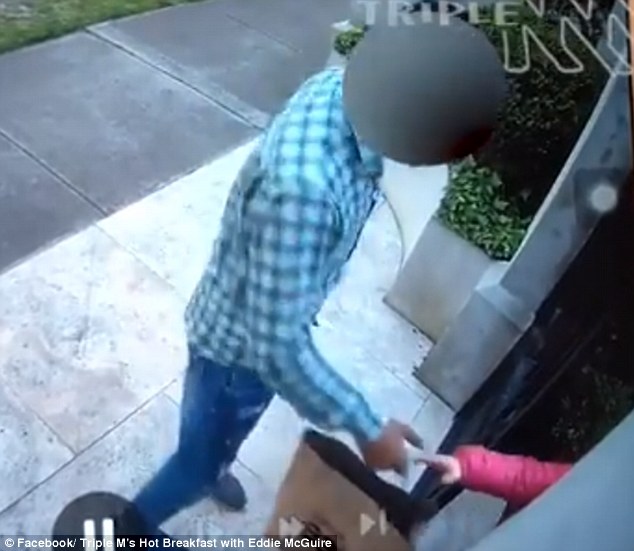 The deliveryman went undetected, with the customer’s arm emerging from the door to collect the order just moments after he ate the chip