An Arkansas woman has been charged with a host of felonies after allegedly leading deputies on a high-speed chase in a stolen pickup truck and repeatedly ramming patrol vehicles while brandishing a gun.

The wild May 5 pursuit was captured on dashboard camera video before Jennifer Porter, 27, was taken into custody.

While sitting in the back of a police cruiser, she was recorded on a security camera by turns apologizing for causing a ‘distraction’ and seemingly bragging about her exploits. 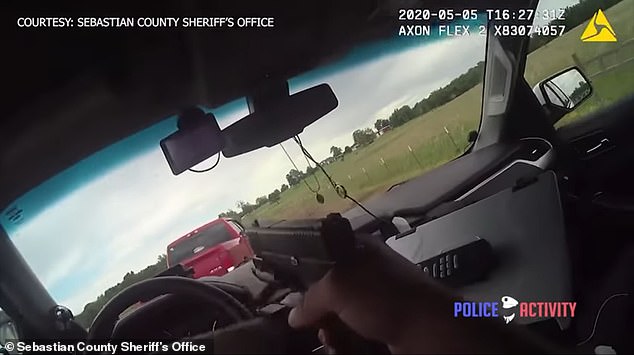 Officials said the suspect, Jennifer Porter, repeatedly rammed the back of the truck into police cruisers to try and cause them to wreck during the pursuit 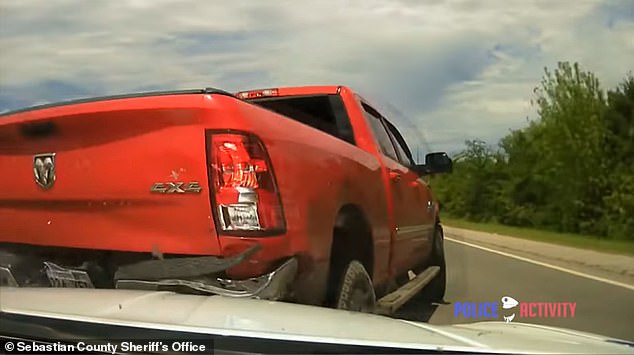 She backed the vehicle into the front of a patrol vehicle, leaving it disabled 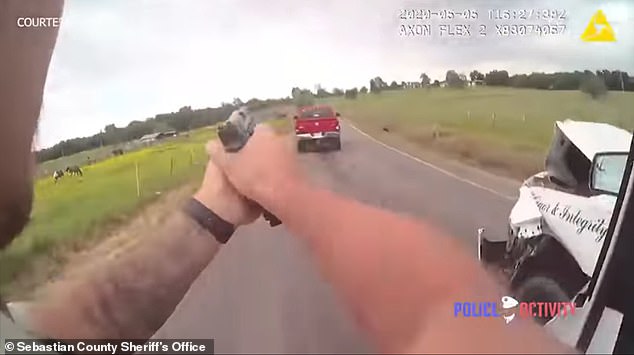 The incident began unfolding at around 10.30am, when a red Dodge pickup with a pistol inside was reported stolen from an address in Fort Smith, according to the Sebastian County Sheriff’s Office, reported Arkansas Democrat Gazette.

A deputy was taking down the theft report when a colleague spotted the stolen vehicle driving along on US 71 South. A chase ensued, with speeds reaching 100mph.

As a dashboard video shows, the driver of the stolen pickup truck started trying to cause the deputy to wreck by breaking suddenly directly in front of his cruiser.

In the course of the chase, which took Porter and the pursuing deputy over multiple county roads and state highways, she purportedly was observed pointing a gun at the officer.

‘She’s got a gun in hand,’ the deputy is heard telling a dispatcher over the radio while drawing his own service weapon. 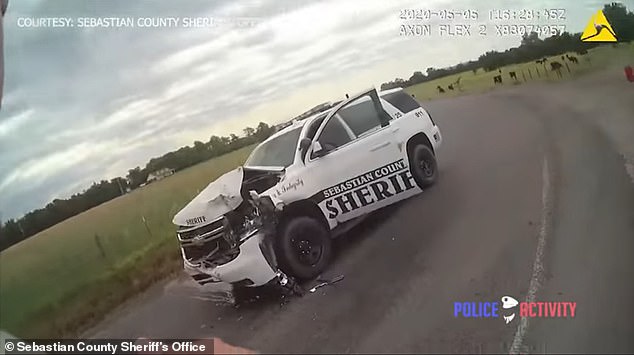 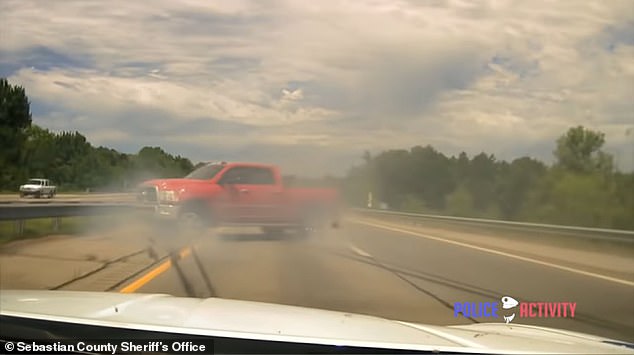 Officers later caught up with Porter and performed a maneuver that led her to lose control and porter, stop (pictured) 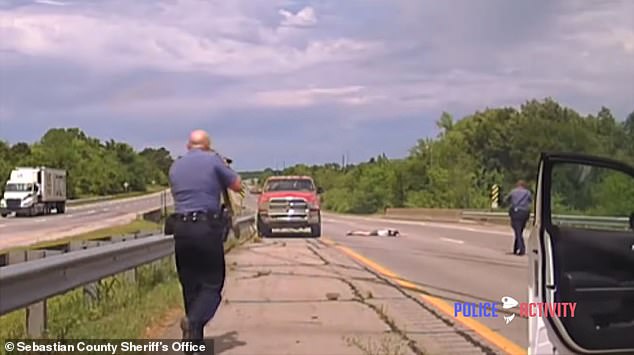 Porter, 27, is seen laying face down on the ground in the middle of the road 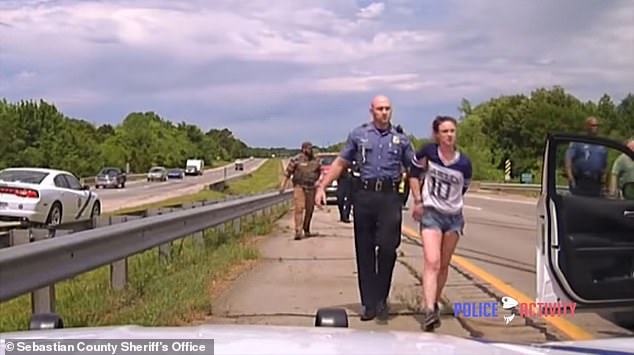 At that moment, the red Dodge backs up and rams the patrol vehicle with force, rendering it disabled.

Porter then drives away, leaving the mangled cruiser behind.

Other law enforcement officers joined the pursuit, during which the fleeing driver allegedly tried to ram additional patrol vehicles at a high rate of speed.

The chase eventually came to an end in the area of US 71 South north of the Jenny Lind community, where Arkansas State Police performed a maneuver that caused Porter to lose control and stop. 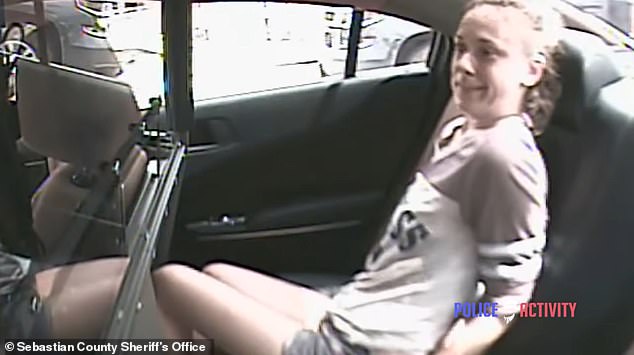 While sitting in the backseat of a cruiser, Porter said she did not mean to cause a ‘distraction’ and added that she is ‘going through a lot’ 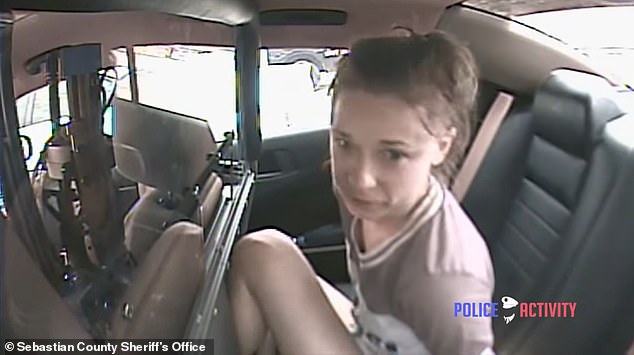 With a smirk on her face, she then adds: ‘Bet they didn’t expect me, huh?’

Video shows the woman, dressed in a sports jersey and a pair of cut-off denim shorts, being forced to lay face down on the ground at gunpoint before being led away in handcuffs. 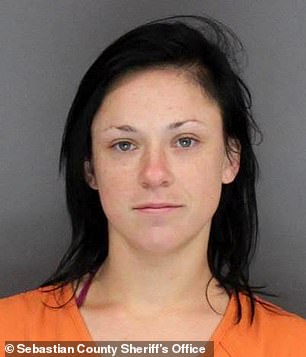 Porter was booked into the county jail on eights counts of aggravated assault, felon in pursuit of a firearm, felony fleeing and theft of a vehicle

Once seated in the back of a cruiser, Porter casually brushes off the entire incident, telling officers: ‘I mean, look, I really didn’t intend on all of this distraction, I’m just going through a lot right now.’

With a smirk on her face, she then adds: ‘Bet they didn’t expect me, huh?’

Multiple police vehicles were damaged during the chase but no officers were injured.

Porter was booked into the county jail on eights counts of aggravated assault, felon in pursuit of a firearm, felony fleeing and theft of a vehicle.

She remained in custody as of Friday afternoon.

Records indicate that Porter’s previous run-in with the law occurred in March, when she was arrested on a count of public intoxication.