‘You don’t know who we know’: Bizarre moment ‘boat Karen’ calls police on a group of kids for splashing her inflatable dinghy with water- as her partner threatens to fight them all

A woman on an inflatable dinghy has been filmed lashing out at a group of kids for splashing her boat with water.

The woman, dubbed ‘boat Karen’ on social media, appears upset that one of the youths deliberately drove too close to her motorised dinghy with their jet ski.

‘You jumped on your f***king ski when you saw us and gave us a whomp and took off like the f***tard you are,’ the woman shouts at the group in the footage.

A man standing on one of the kid’s jet skis, understood to be her partner, stands by her side in support and threatens to fight the group as they question why the pair are so angry.

When one of the group asks the man to relax, he responds ‘you need to relax or I’ll put you to sleep – so you shut the f**k up right now’.

He also asks them if they ‘want to have a go’ as he hands his glasses to his partner.

One of the boys ask what the pair are doing in the water if they didn’t want to get splashed, leading to a furious response from the couple.

‘It’s a waterway you little d***face,’ his partner adds.

It is unclear where or when the video – shared to viral Australian fishing video social media page Tinny Bashing on Monday – was taken.

The woman – who was accompanied on the motorboat by two small dogs – also tells her partner to take photos of the jet ski so she can call police. 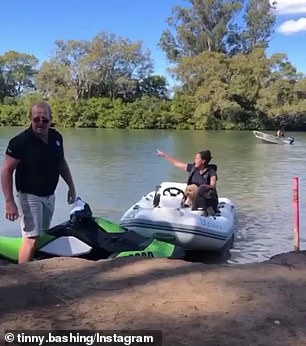 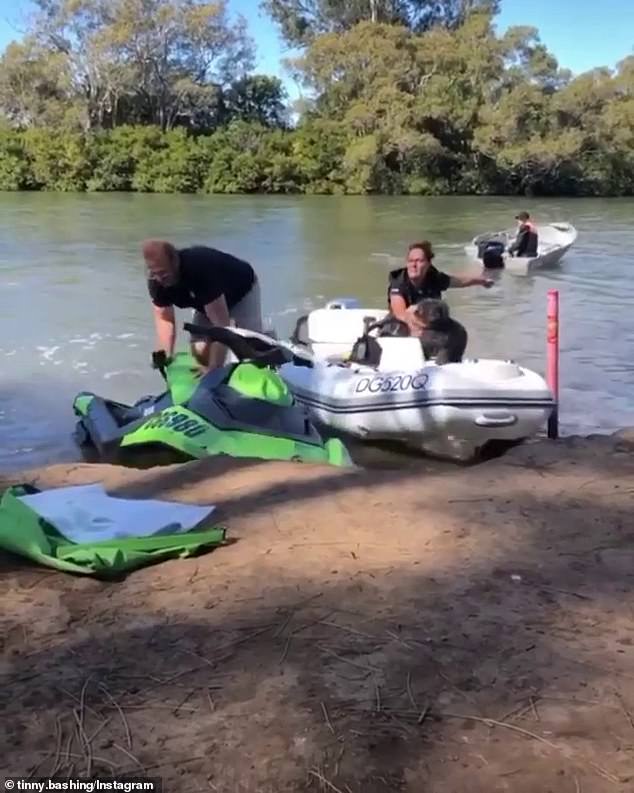 ‘Get all the regos (registrations) because you’re in for it now, you’re bloody in for it. You don’t know who we know.

‘Guess what – the cops are going to be coming round. You people are round here 24-f***ing-seven.’