This is the shocking moment a care worker was hit by a van and then a car on a zebra crossing in a double hit-and-run – before a pedestrian walked past as she lay on the ground.

Jackie Carrington revealed she fractured her wrist and spent four hours in A&E after the ‘disgusting’ incident. She has spoken out to slam both motorists and the person who walked by at about 5pm on Thursday.

The 59-year-old was walking home when she was knocked down by a white Ford Transit van on a zebra crossing. CCTV footage of the incident in Southampton, Hants, shows the van drive off as Miss Carrington falls to the ground.

Then, the shocking footage captures what appears to be a Ford Fiesta driving into ‘scared’ Miss Carrington as she lay on the ground before driving away from the scene.

The Fiesta ‘rolled’ over her work laptop and one pedestrian who witnessed the incident walked past stricken Miss Carrington.

Hampshire Constabulary has now launched an investigation to find the drivers following the horror incident.

Today Miss Carrington spoke out and told how it has ‘shaken’ her up.

Miss Carrington, from Southampton, said: ‘I can’t believe that you could hit anyone and just drive away. What possesses you to do that?

‘It’s bad to hit anyone, don’t get me wrong, but you’re supposed to be safe on a zebra crossing.

‘[The van] hit me hard enough to throw me back. I lost my balance and kept going back.

‘Then I fell in the road and dropped the laptop.’

CCTV footage of the incident in Southampton, Hants, shows the van drive off as Miss Carrington falls to the ground – then she appears to be hit by a second vehicle 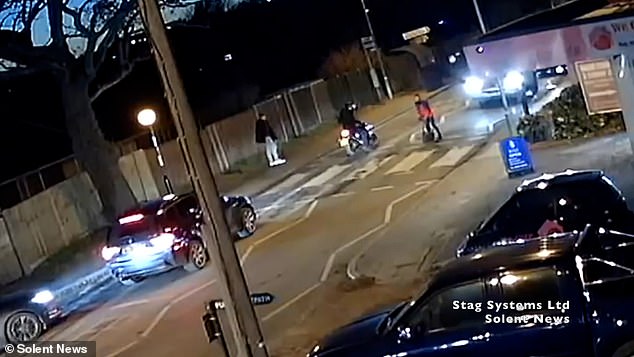 A Hampshire police spokesman said: ‘The pedestrian, a 59-year-old woman, suffered a hand injury as a result’ 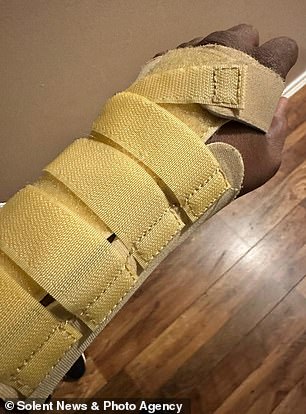 ‘But then I felt something banging into my shoulder. I couldn’t quite, at the moment, think what it was. As I looked round, I could see it was a car,’ she added.

‘I was trying to get up, but I couldn’t get up and he just kind of literally pushed me out the way and drove off. I’m just really shocked.

‘I was scrambling on the floor, I was worried it was going to hit my head – I was scared and thought ‘I can’t believe this is happening’.’

Miss Carrington said a moped rider rushed to get the number plate of the van driver after checking she was OK, and a second motorist who witnessed it came to her aid.

She was rushed to hospital by one of her managers at We Care Together Southampton, which provides care for elderly people, and was left with a fractured wrist and was fitted with a splint.

She said: ‘On the grand scale of things I feel very lucky. Extremely lucky.

‘It was really hurtful… the fact they didn’t stop.

‘I do feel angry but not to the extent of like it’s dragging me down.

‘Then when I saw the video as well, this bit I didn’t even know, the guy that was walking behind me just walked by me, looked and walked off – who does that?

‘I’ve got a fractured wrist. I do feel lucky.

‘My whole hand ballooned up so it’s really swollen.’

Co-owner of We Care Together, Chantal Francois, added: ‘It’s disgusting. It’s just vile. It really, really puts into perspective how people aren’t willing to help someone when they’re really in need.

‘My message is stop. Just stop. It doesn’t matter how wrong you are, face it and just make sure that person’s okay because it could have turned out completely different had they stopped and shown compassion for their mistake.

‘You have to take ownership for something when you’ve done something wrong, whatever the circumstances are.

‘Nobody in that situation was honest or decent other than the motorcyclist.

‘It could have been so much worse. It really shocked me to my core.’

A Hampshire police spokesman said: ‘The pedestrian, a 59-year-old woman, suffered a hand injury as a result.

‘One of the vehicles was described as a white Transit Van, the other was a small car, possibly a Ford Fiesta. Neither vehicle stopped at the scene. Enquiries are ongoing.’