A woman who plunged into an icy lake in Michigan and was stuck in the freezing water for 15 minutes has said she prays ‘no one has to go though this’.

Korisa Miller was fishing off the docks in Harrison County, Michigan, when she lost he footing as she tried to stand up and slipped into Lake St Clair.

The Michigan woman has now hit out at ‘people who are body shaming’ her for the decision to share the rescue video to spread awareness of the dangers involved in ice fishing. 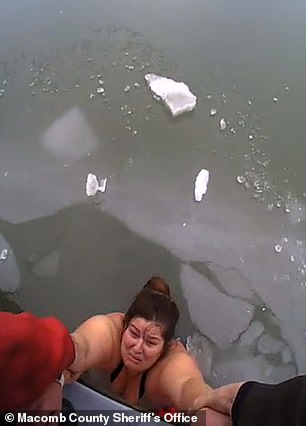 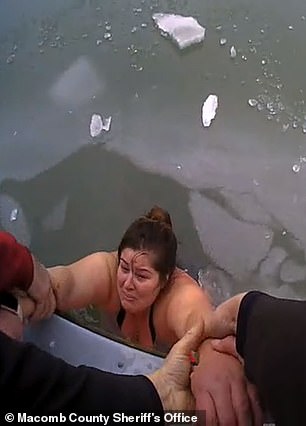 ‘This isn’t going to stop me from doing what I love.

‘So the Haters are going to hate and it isn’t going to get me because of my story someone will not make that mistake.’

Earlier videos posted to Facebook show the friends happily drilling into the ice before they cast their lines but warn ‘I will post what happened earlier the reason why I cannot laugh anymore today’.

‘I was turning around and I lost my grip somehow. That part is a little fuzzy,’ she told Fox News.

‘We did not think that anything like this could happen.

‘We weren’t on the ice. We were on the dock. It was a freak accident if we had a life jacket they could have laid on the thick ice and pulled me up.’ 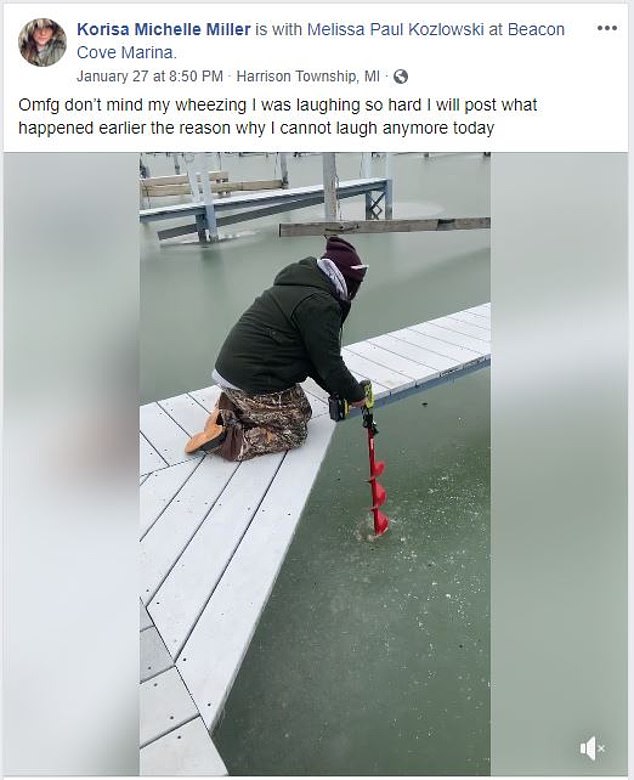 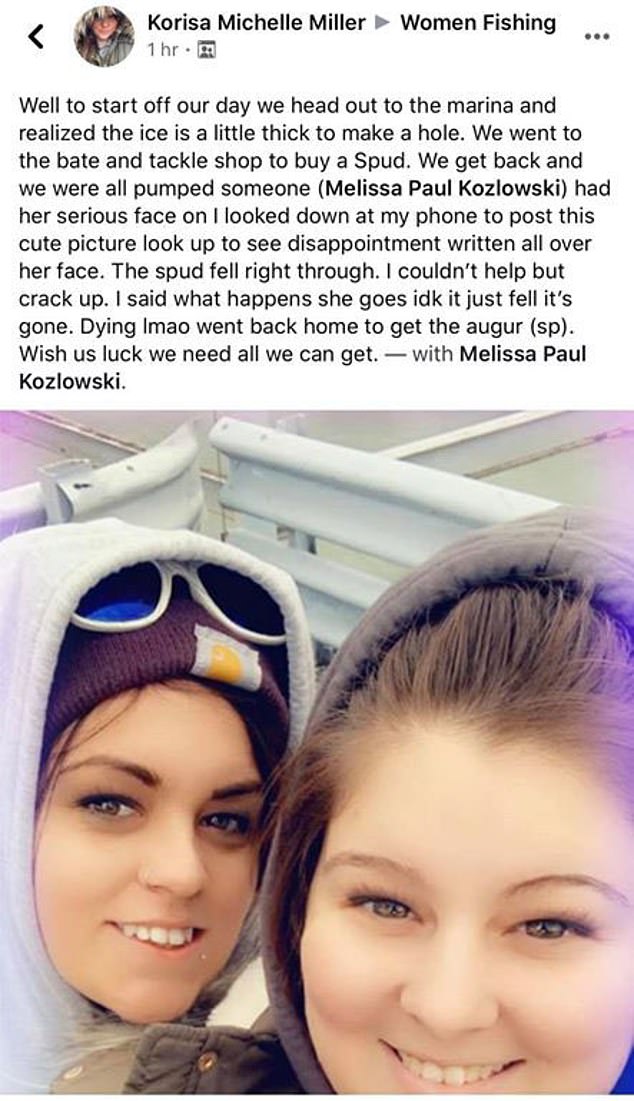 At around 3.20pm on Monday, Macomb County Sheriff’s Office received a call that a woman had fallen into the lake from the dock and couldn’t get out.

Bodycam footage from the officer who rushed to the call shows two strangers, named only as fishermen Joe and Mark, holding Miller above the water as she tells the officers she can’t move at all because her body is so numb.

‘After two minutes of me being in there, from the waist down was completely numb. I couldn’t feel my feet,’ she said.

‘They took off my jacket and sweater because it was choking me. That’s why I was in a tank top, I didn’t go there in a tank top.’

According to a Facebook post form the Macomb County Sheriff’s Office, Kozlowski heard Miller fall from a dock over and saw her struggling in the icy water.

‘Her friend was unable to pull her up to the dock and the young lady’s body began to go numb,’ the post said.

The two nearby fishermen also heard the woman’s cries and attempted to help but the cold had made her body completely numb and she was unable to move.

The fishermen held Miller above the water as much as they could to prevent her from drowning as the woman’s friend called for help.

‘I could not thank them enough,’ Miller said of the local heroes.

‘We met them earlier and were sharing fishing stories about how much we love it.’

‘They acted so quick, they didn’t think about it, they ran right to us,’ Kozlowski added.

Miller was finally pulled from the water after first responders arrived.

After a 15-minute unexpected dip, she returned home with frost bitten toes and a sore shoulder but says it has not put her off ice fishing.

She has reminded people, however, to always fish with a partner and to wear non-slip footwear. 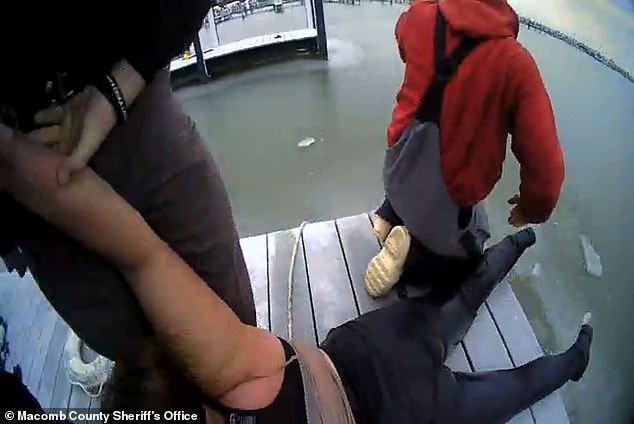 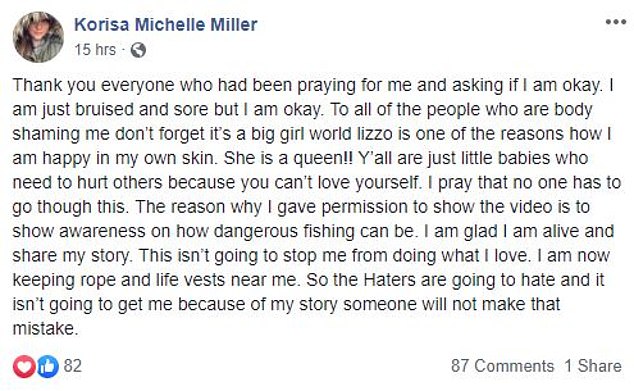 She has also hit out at ‘people who are body shaming me’ over the video saying that she gave permission for the video to be shared to highlight how dangerous fishing can be and to prevent anyone else from having ‘to go through this’.

‘Thank you everyone who had been praying for me and asking if I am okay. I am just bruised and sore but I am okay’ she wrote.

‘To all of the people who are body shaming me don’t forget it’s a big girl world lizzo is one of the reasons how I am happy in my own skin. She is a queen!! Y’all are just little babies who need to hurt others because you can’t love yourself. I pray that no one has to go though this.

‘The reason why I gave permission  to show the video is to show awareness on how dangerous fishing can be. I am glad I am alive and share my story.

‘This isn’t going to stop me from doing what I love. I am now keeping rope and life vests near me. So the Haters are going to hate and it isn’t going to get me because of my story someone will not make that mistake.’

The Macomb County Sheriff’s Office offered a reminder that if you fall into cold water, try not to panic, try to control your breath and focus on keeping your head above the water.