Cheeky young cricket fan begs David Warner for his shirt during one-day win over England – but the Aussie star tells him to ask teammate Marnus Labuschagne instead!

Australian batsman David Warner showcased his sense of humour with a young fan in Adelaide on Thursday night.

Warner, 36, had just plundered 86 at the top of the order as Pat Cummins’ side comfortably chased down England’s total of 287 from 50 overs.

The power hitter was in vintage touch at the crease, hitting 10 boundaries and a six off 84 balls in the ODI series opener.

With Australia circling on an impressive victory, the cameras panned to a bold youngster who knew what he wanted.

Sitting on the fence next to the boundary rope, the cheeky fan produced a hand-written sign asking for Warner’s shirt.

The image was seen by the dynamic batsman, who responded with a hilarious message of his own – ‘get one off Marnus.’

Warner was referring to teammate Marnus Labuschagne, who was one of few players not to cash in the batsman-friendly wicket in the City of Churches.

Labuschagne was dismissed for just four, with makeshift opener Travis Head (69) and Steve Smith (80 not out) impressive when swinging the willow. 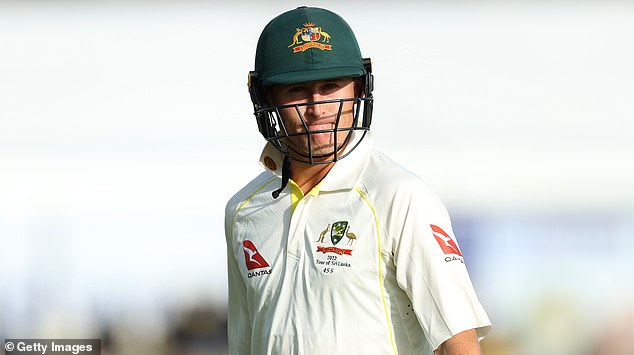 Warner’s own sign was referring to teammate Marnus Labuschagne, who was one of few not to cash in the batsman-friendly wicket versus England

‘(It) was probably the best I’ve felt in about six years,’ Smith told reporters when reflecting on the victory.

‘I was just in really nice positions and I felt really good, I honestly haven’t felt that way in six years or so.

‘It’s been nice to score some runs in that time and we’re always looking for perfection, and for me that was as close to perfection as I will get.’

In a feel good moment, Warner was seen motioning for the young fan to come up towards the Aussie dressing room – where it is believed he passed on a training shirt to the elated youngster.

Australia’s next ODI versus England is on November 19 at the SCG, with play starting at 2.20pm (AEST).