Moment hero bystanders collar thug who dragged woman out of her car, bashed her and stole her phone

Justice served: Moment hero bystanders collar thug who dragged a woman out of her car, bashed her and stole her phone

A group of vigilante citizens have tackled two teenage thugs in the streets after they punched and dragged a 41-year-old woman out of her car to rob her.

The citizens arrest was made after two teenage boys, aged 15 and 16,  allegedly dragged the woman out of her car as she sat in her parked vehicle at Robina in the Gold Coast, Queensland, about 5.30pm on Friday.

They then repeatedly punched her and ran off with her phone.

CCTV footage captured the moment the thugs ran down the street after the attack in broad daylight.

One of the men, dressed in head to toe black is seen running before turning back and throwing a phone on the ground.

The other, dressed in a black shirt, grey pants and a cap is seen running with a handbag draped over his shoulder.

Two teenage men, aged 15 and 16, were spotted running through the streets of Robina as citizens chased them after allegedly dragging a 41-year-old woman from her car, repeatedly punching her and running off with her phone

A woman following swiftly behind them stops running to pick up the phone before she runs back the way she came.

Later in the footage, two men, one shirtless, is seen holding the alleged attacker by the arms and bringing him back to the scene of the crime.

The two boys were then arrested and have since been charged with robbery, Queensland Police said in a statement.

The victim was transported to Robina Hospital for treatment of minor facial injuries. 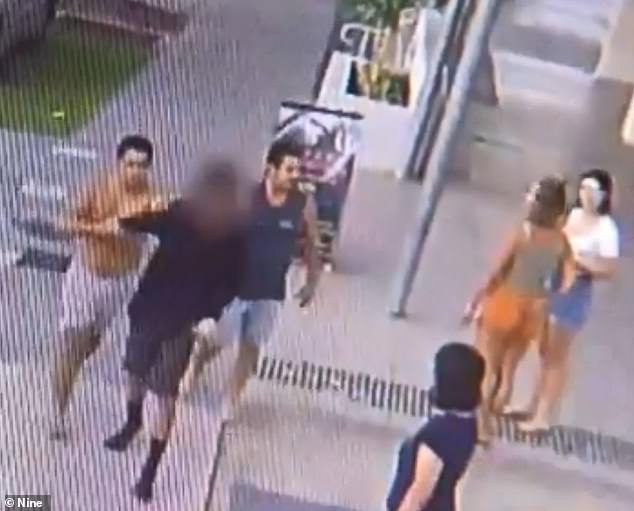