A man was caught on camera unleashing a torrent of anti-Semitic abuse at a Jewish family while on the tube.

The footage was recorded by a commuter on board a Northern Line train on the London Underground.

In the video, two passengers, who appear to be father and son, are sat down wearing kippot on the crowns of their heads.

A man standing near the door, who is wearing a blue jacket and baseball cap, leans over toward them as he reads aloud from a text in his hand.

He can be heard saying phrases including references to the ‘synagogue of Satan’ and reading ‘I will make them come and worship before your feet’.

The father puts his arm around his son and tries to distract him by talking about other things.

But the other passenger thrusts the book further in front of the boy and continues to talk aloud. 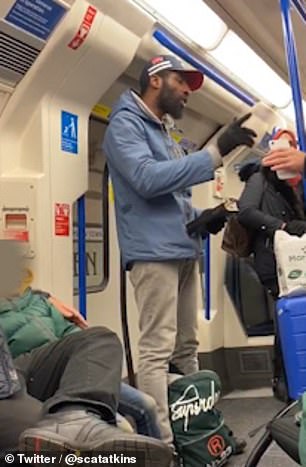 The footage was recorded by a commuter on board a Northern Line train on the underground in London. Two passengers, who appear to be father and son, are sat down wearing kippot as a man standing near the door leans over and reads aloud

Other passengers on the train try to intervene as the man squares up to them.

He says: ‘You need to get out of my face or I will smack you right in your nose, man. Back up from me. I’m not no Christian pastor. Back the f*** up from me.’

A woman standing near the confrontation then addresses the man but only snippets of the conversation can be heard.

She says: ‘There are children in here. Come on man!’

The man responds by saying: ‘Listen, these people are impostors, trying to claim our heritage.

‘Do you care about your people?’ 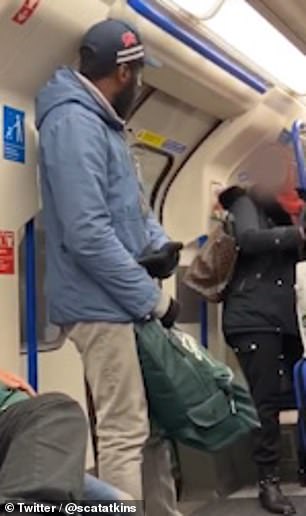 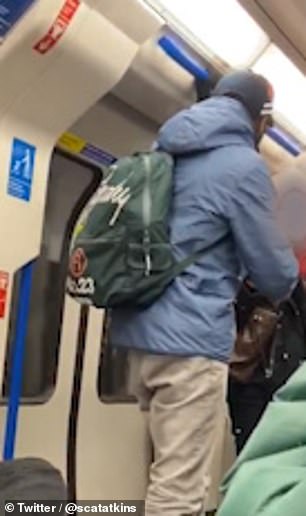 She calmly holds out a hand as if to pacify the man and says: ‘I respect your opinion…’

The pair continue to debate while the father-and-son duo begin their own conversation in the opposite direction.

The tannoy sounds as the carriage approaches another stop and the video ends shortly after.

The video was posted on to Twitter earlier today by Chris Atkins.

It was uploaded alongside the caption: ‘Around noon I witnessed appalling anti Semitic abuse towards this Jewish Family on the northern line.

‘Fair play to other passengers who stood up to him. If you recognise the guy please report to ⁦@metpoliceuk.’

Other social media users were quick to praise both the Jewish family and the intervention by fellow passengers who came to their defence.

British Transport Police said that they had been made aware of the abuse and that their enquiries are still ongoing.