Meghan and Harry gave fans a sneak peek into their life at  Kensington Palace before moving to Windsor, in the latest instalment of their Netflix show.

Footage of Meghan playfully dancing in the doorway of the couple’s farmhouse-style love nest was shown in episode four of the docuseries.

Despite being at the heart of a royal estate the cottage has a countryside feel to it, with cobbled walkways and shrubs sprouting in the borders. A lemon tree can be seen near one of the doorways as Meghan – wearing a Barbour gilet, casual leggings and walking boots – threw some shapes for her husband.

Describing their home, Meghan said: ‘People thought we lived in a palace and we did. Well, a cottage in a palace.’

Harry said: ‘It had really low ceilings. I don’t know who was there before, must have been short.’

Meghan laughed, revealing Harry would ‘hit his head constantly because he is so tall’. 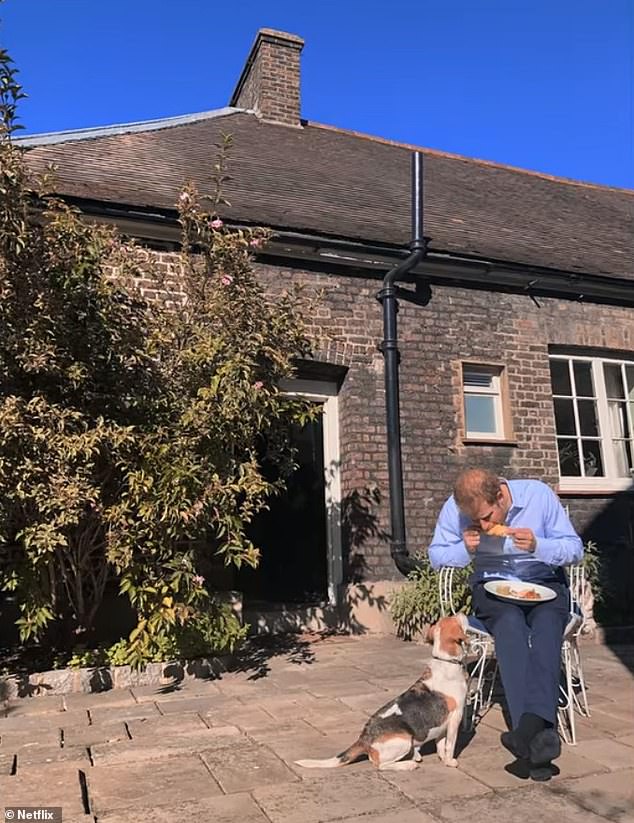 Harry eats chicken outside the cottage on a sunny day as Meghan’s dog Guy begs for at treat. Despite being in central London, the surroundings have a countryside feel

The Duchess of Sussex said: ‘It was a time in our lives that people probably couldn’t believe what was going on behind the scenes.’

Another snap with a homely feels shows Harry eating chicken and cuddling up with Meghan’s dog Guy on a cream sofa.

Oprah Winfrey was among the guests who came to visit the Sussexes at Nottingham Cottage. 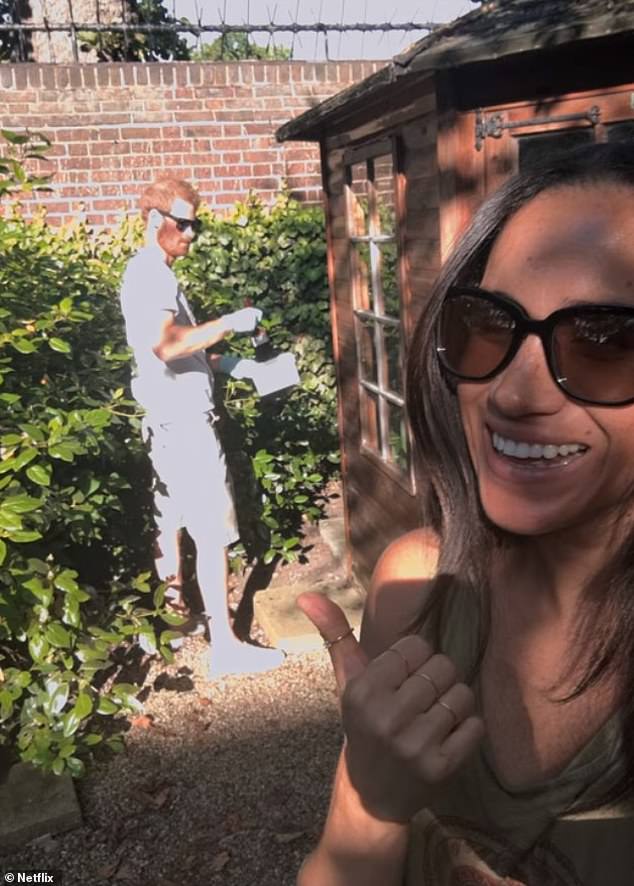 Royal DIY! Meghan takes a selfie while Harry gets on with some outdoor varnishing in the background 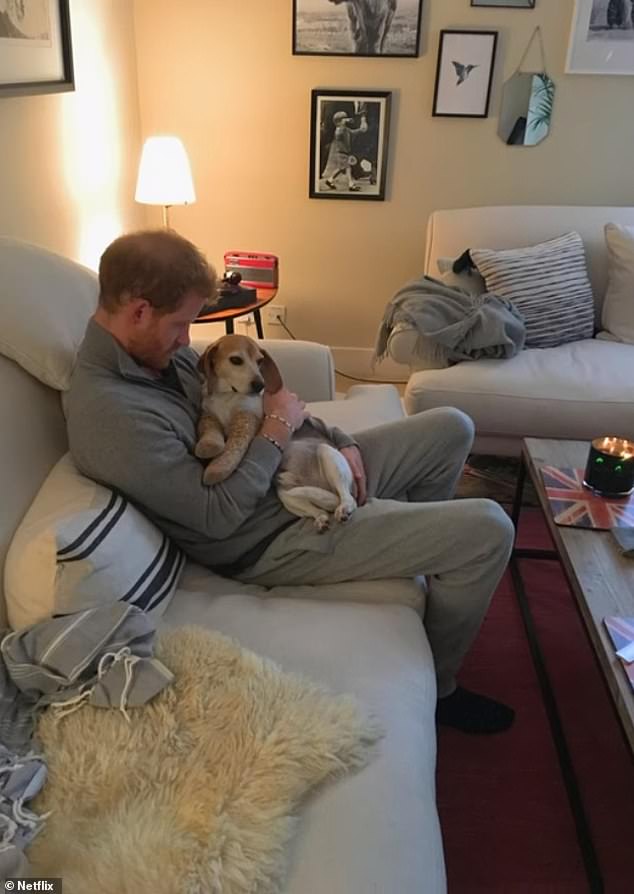 Harry and dog Guy share a cuddle on the sofa. Staying true to his roots, a Union Jack place mat can be seen on the table with a candle on top 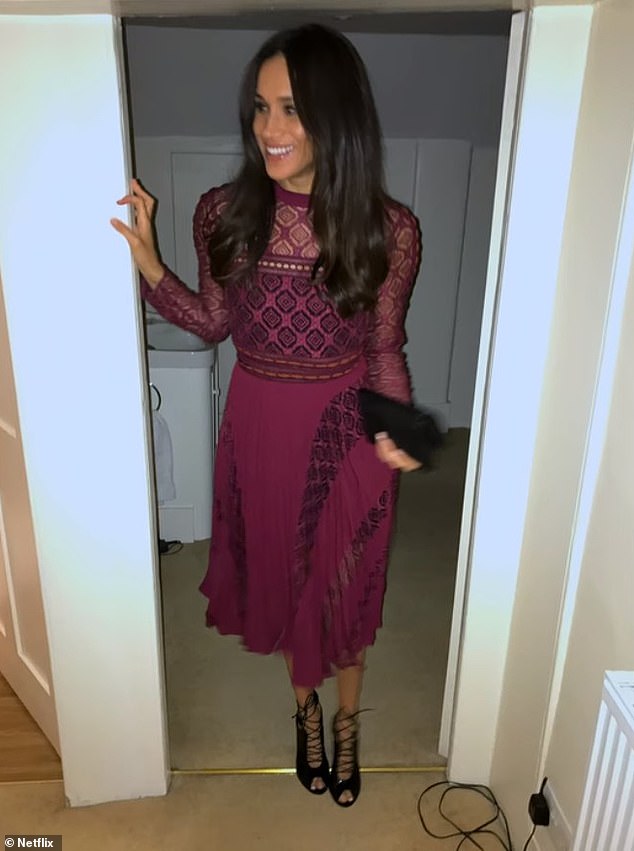 Date night! Meghan shows off a burgundy midi dress with a lace peephole detail at the top and a pleated skirt. She opted for lace-up black shoes and a small black clutch to finish the look 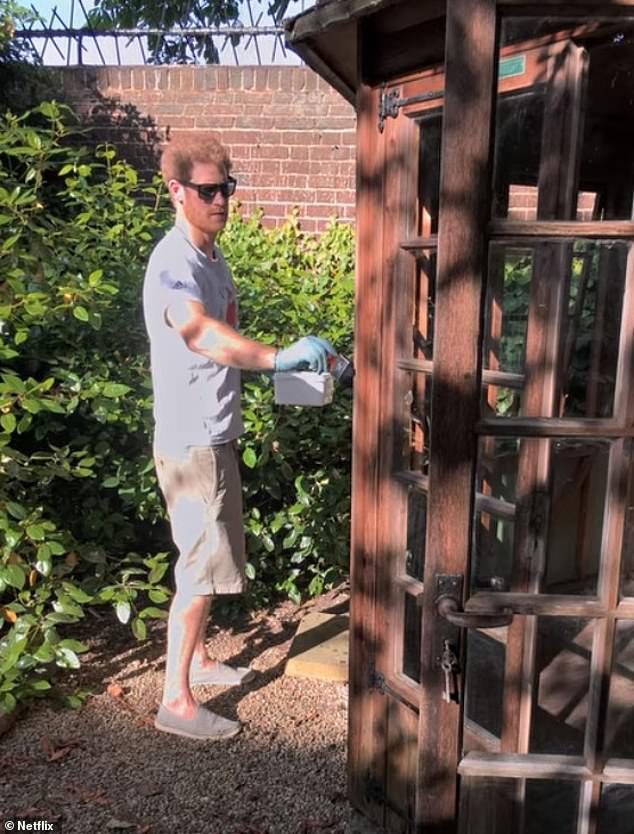 House husband Harry! The Duke of Sussex is seen varnishing the outhouse in a very domestic scene as his wife watches on

Harry shared that the TV mogul said upon entering their home: ‘She said, “No one would ever believe it!”.’

Meghan repeated the phrase and laughed.

Alongside pictures of the royal couple doing gardening, the show featured snaps of Meghan dressed in a burgundy swing dress for date night, and the Duke of Sussex in his military dress uniform joking around with his wife.

The décor at Nottingham Cottage brought a touch of minimalist countryside chic to the Kensington-based home, with shaggy cushions, throws and cream furnishings.

The couple’s other dog Pula, a black Labrador, watches the rainfall at Nottingham Cottage in Kensington Palace

Other personal moments shared by the couple in the latest batch of episodes include unseen wedding photos, and footage and images of their two children Archie and Lili. 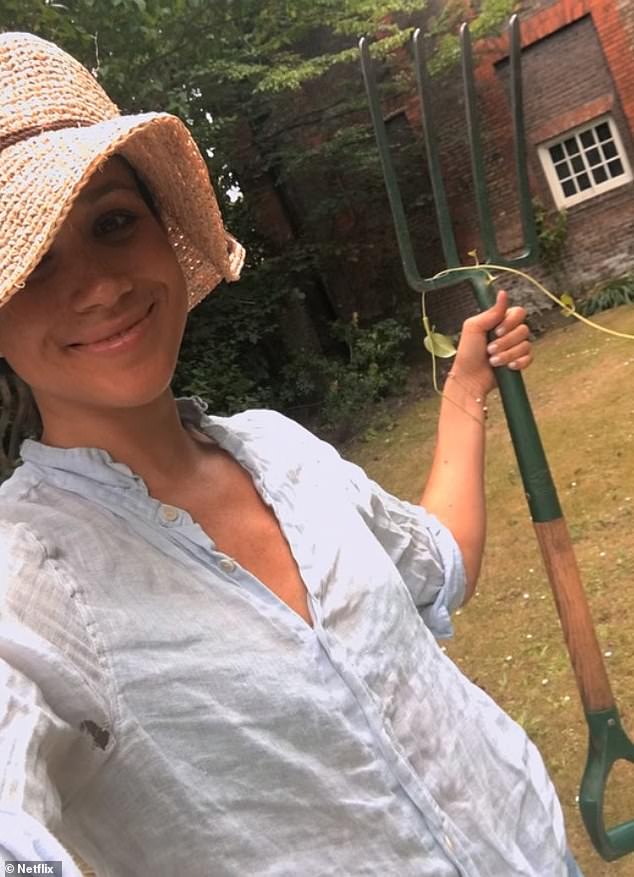 The Duchess of Sussex shows off her green-fingered skills as she brandishes a garden fork, wearing a casual button down shirt and a straw hat 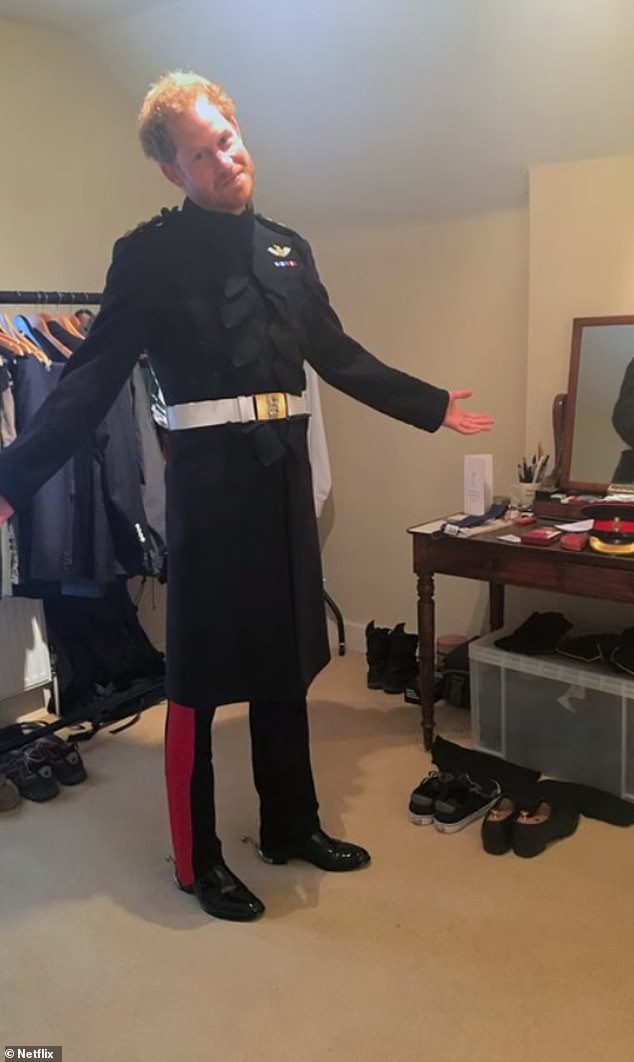 Harry clowns around in his dress uniform at Nottingham Cottage. His suits and shoes can be seen hanging up in the background of the dressing room