This is the moment a young mum with a ‘pulsating’ lump on her head has it removed after two years of misdiagnosis.

Lauren Brook has lived with a mysterious, golf ball-sized lump sticking out from her forehead, located just underneath her hairline for the past two years, with it only being diagnosed and removed after visiting a central London clinic.

The lump got worse after she gave birth to her baby boy last year, and she’s been left crying over not being able to take sweet pictures with her little one due to insecurity over the mark.

‘I’ve had this unknown lump for about two years, and no one has given me a correct diagnosis,’ she says in scenes filmed for tonight’s brand-new episode of The Bad Skin Clinic on Quest Red.

Lauren Brook has lived with a mysterious, golf ball-sized lump sticking out from her forehead, located just underneath her hairline for the past two years 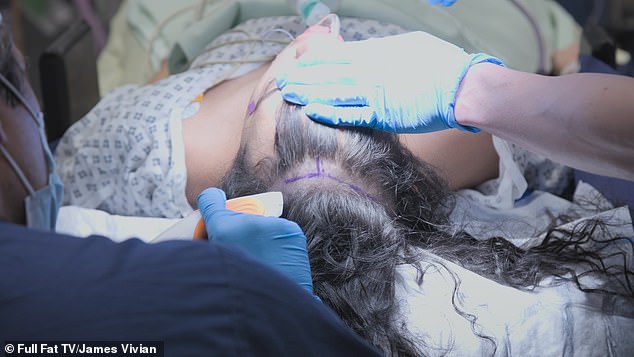 While the lump doesn’t cause Lauren any pain, it does throb and pulsate under her skin.

‘It feels like a pulse in my forehead, like a little heartbeat. It’s just always on my mind,’ she says.

But worst of all, the lump has thrown Lauren’s confidence into freefall, effectively making her a recluse.

‘It just puts so much strain on my day-to-day life. I just don’t feel confident anymore,’ she says.

Having given birth to her son a year ago, Lauren admits that she’s noticed the bump grow exponentially over the past 12 months. 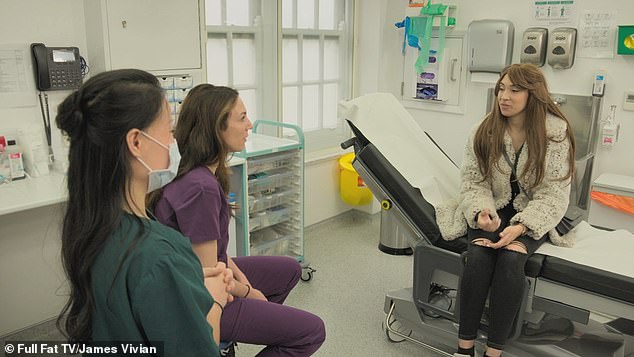 Lauren Brook is seen on clinic bed talking to Dr Emma and Nurse Mottie. The lump got worse after she gave birth to her baby boy last year, and she’s been left crying over not being able to take sweet pictures with her little one due to insecurity over the mark 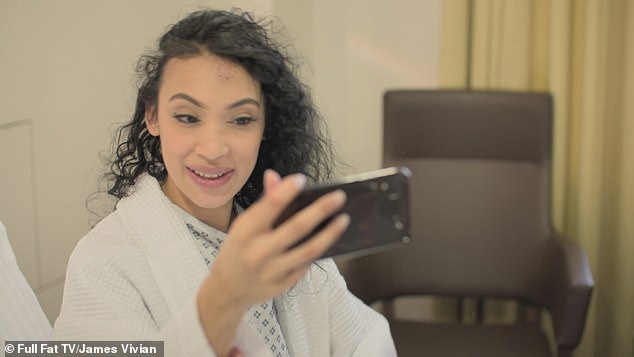 While the lump doesn’t cause Lauren, pictured,  any pain, it does throb and pulsate under her skin.

‘Over the last year since I’ve had my baby, it’s just been growing bigger and bigger,’ she says.

‘The more stressed I feel, the bigger it looks and the more noticeable it is.’

As a new mum, Lauren feels that her lump is having a negative impact on her son’s life too, deterring her from taking photos of them both together.

‘The lump has affected the first year of my son’s life; we don’t really have that many memories and photos,’ she says tearfully. 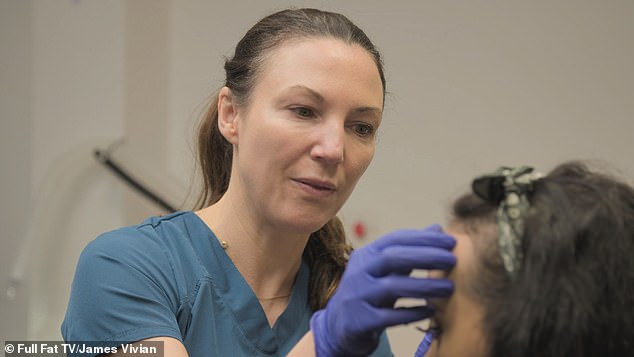 As a new mum, Lauren feels that her lump is having a negative impact on her son’s life too, deterring her from taking photos of them both together. Dr Emma looked to remove it 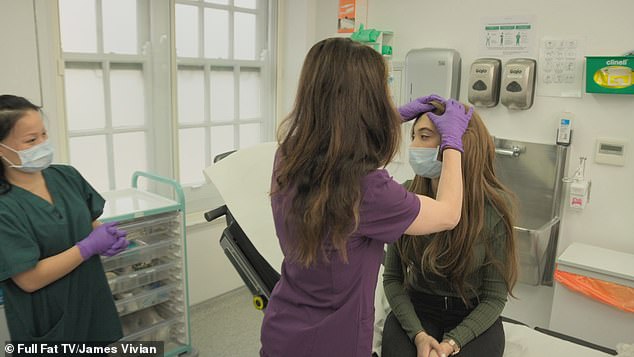 Hoping to say a long overdue goodbye to her troublesome forehead lump, Lauren pays a visit to leading Dermatological Surgeon Dr Emma Craythorne at her clinic in central London, where she tells Dr Emma just how much the lump affects her. Pictured at the clinic

‘When I’m on social media I see all these new mums with all their photos. It just breaks my heart.’

Hoping to say a long overdue goodbye to her troublesome forehead lump, Lauren pays a visit to leading Dermatological Surgeon Dr Emma Craythorne at her clinic in central London, where she tells Dr Emma just how much the lump affects her.

‘As I start the day it’s quite small like now, but by the end of the day it gets massive,’ she says.

‘You can see it pulsating, and I can feel the pressure on my forehead.’ 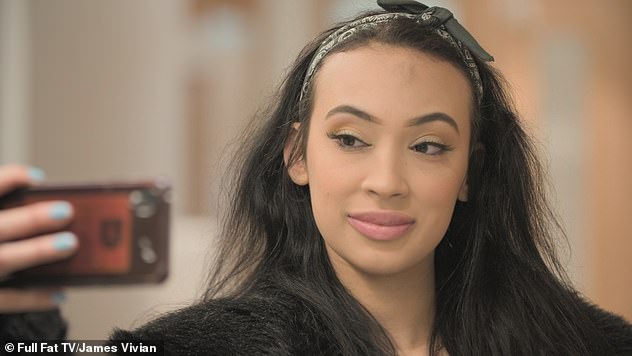 Lauren even explains how the lump has grown since giving birth to her son. ‘Literally like an hour after I gave birth, I noticed that it got bigger,’ she says. She is pictured after it’s removal

Lauren even explains how the lump has grown since giving birth to her son. ‘Literally like an hour after I gave birth, I noticed that it got bigger,’ she says.

‘All the nurses kept saying, ‘what’s happened to your forehead?!’

‘So you got rid of one bump, and you got another?’ she jokes.

‘I mean I’ve seen a lot of lipomas in my time, and none of them have this story,’ she says.

What is a a vascular malformation?

A vascular malformation is a general term that covers congenital abnormalities of blood vessels.

For some patients the malformation will affect just their veins, while others will suffer abnormalities in their lymph vessels alone, with some suffering malformations in their veins and arteries at the same time.

The condition is present at birth but will become apparent at different ages, depending on the patient.

Experts still do not fully understand what causes the malformations to occur.

Studies are being carried out to explore the possibility that they are genetic.

But, scientists believe most malformations are caused during the development of the blood vessels affected.

Symptoms of a vascular malformation can vary depending on where in the body is affected.

Venous malformations may cause pain at the site of the abnormality.

They can typically cause a lump under the skin, and there may be an overlying birthmark on the skin.

Bleeding or fluid leaking from lesions in the skin is also common.

While surgery is often useful to help manage a patient’s condition, surgeons can rarely remove vascular malformations in their entirity.

As a result it is often the case that after surgery a patient’s malformation will reappear.

‘Whenever I’m pressing on that vein, it fills up with blood; it becomes engorged. That’s why it gets bigger like that,’ she comments as she runs her fingers over the bump.

‘Whenever I put my finger on the draining vein, you could see it expand.’

Dr Emma then offers her diagnosis – and it’s more complex than she originally anticipated.

‘This is entirely related to the little veins and arteries that we have in our body. This is something called a vascular malformation.’

In other words, the tiny blood vessels in Lauren’s head have fused together, making it difficult for them to drain properly.

‘Sometimes you can get them from banging your head,’ Dr Emma continues.

‘Sometimes it might have been there forever and actually the growth hormones that happen in pregnancy and the pressure of delivering a baby, all of these things might have ‘popped’ it.’

For Lauren, it’s a cause for concern.

‘Is it going to explode, am I going to bleed out?’ she asks, panicked.

But Dr Emma reassures her there’s nothing to worry about.

‘We’re going to do a scan, and then I’ll review the scan with one of my colleagues – Mr Ong – and his specialty is in treating these vascular malformations,’ she says.

‘Although this looks like it’s in the skin, sometimes they extend under the muscles and into the bone,’ she adds.

Following her scans, a treatment plan is pulled together – with Mr Ong and Dr Emma deciding to put Lauren under general anaesthetic to remove the lump once and for all.

On  operation day, a fully sedated Lauren is wheeled into surgery were Mr Ong starts by shaving part of her scalp.

‘I’m just marking the incision in a nice curvature just behind the hairline, so that eventually it’s hidden well in the hair,’ Mr Ong says, before making his first incision, cutting into the skin and tissue behind Lauren’s hairline.

‘I am just cutting through the layers of the scalp, so now I can get into this space,’ he says.

‘Although it’s a very big incision, once it’s healed, you’ll hardly see it.’

Peeling back layers of Lauren’s scalp, Mr Ong finally reveals the malformation of veins that are the cause behind Lauren’s pesky head lump.

Cautiously, Mr Ong and his team cauterise the veins and start snipping the malformation free, and it’s a tricky job.

‘A risk of this is that you go through the skin,’ he says. ‘It’s a balance of removing as much of it as possible and making sure it doesn’t come back, but at the same time keeping her forehead as nice as possible.’

Eventually, the build-up of blood vessels is pulled free from the inside of Lauren’s scalp after a gruelling operation.

Fast forward several weeks, and Lauren is back on her feet and back at Dr Emma’s clinic after her operation.

‘Yeah, they had to cut me from me here to here,’ she says, drawing a semi-circle from her left ear, across the top of her scalp, and down to her right ear.

Thankfully, the operation – as Dr Emma can see for herself – was a complete success.

‘There’s nothing there now, it’s all just smooth,’ she says, running her thumb across Lauren’s forehead.

‘You know, once this bruise has gone, you’re not going to have any scar there at all!’

Happily, Lauren can look towards the future completely bump free!

‘Literally just amazing,’ she beams. ‘I just feel happy, all the time.’

For Dr Emma, Lauren’s transformation – both physically and mentally – is nothing short of astonishing.

‘Seeing Lauren so full of beans after what was a pretty big operation is just wonderful,’ she says. ‘

She is absolutely brimming with confidence now and ready to face the world.’

The new series of The Bad Skin Clinic airs from 10pm tonight on Quest Red, or stream on discovery+