New videos posted on social media show the moments an NYPD officer appears to yank down a George Floyd protestor’s coronavirus mask to pepper spray the man during violent protests over the police-related fatal shooting, as police vehicles raced through a Brooklyn intersection crowded with demonstrators.

The unnamed protestor in one video, which was posted by Anju J. Rupchandani on Twitter saying he was a ‘family member’, was holding his hands up and lowers them when his mask is pulled down by an officer for unknown reasons.

That’s when the man is pepper sprayed in the footage and walks away clearly affected.

‘I am heartbroken and disgusted to see one of my family members a young black man w/his hands up peacefully protesting and an NYPD officer pulls down his mask and pepper sprays him,’ wrote Rupchandani under the handle @AJRupchandani. 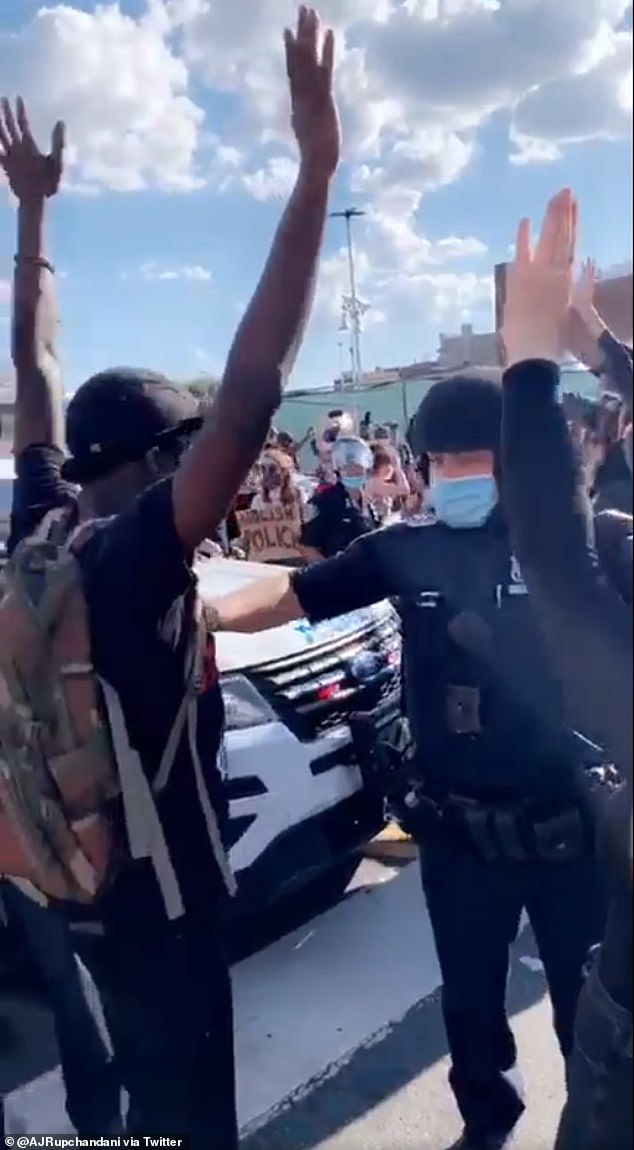 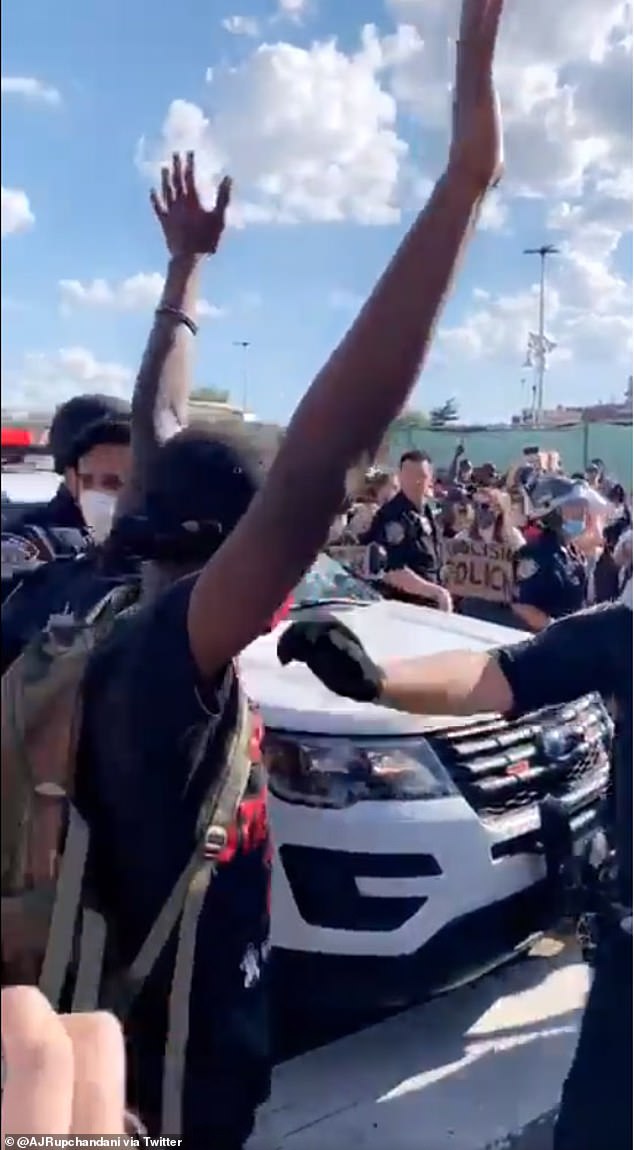 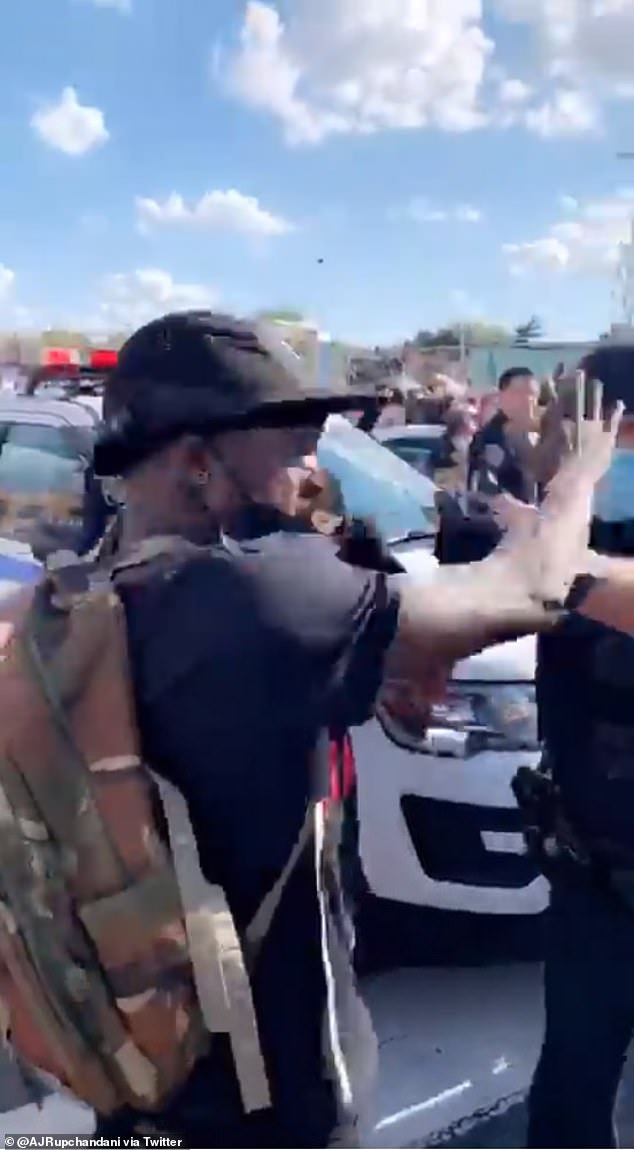 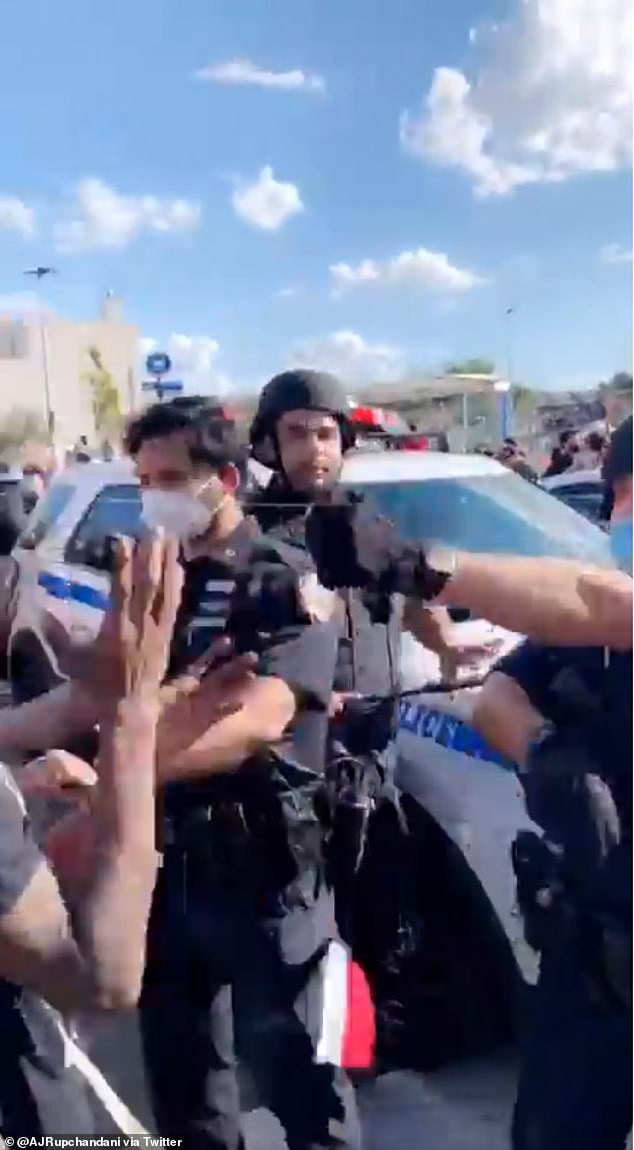 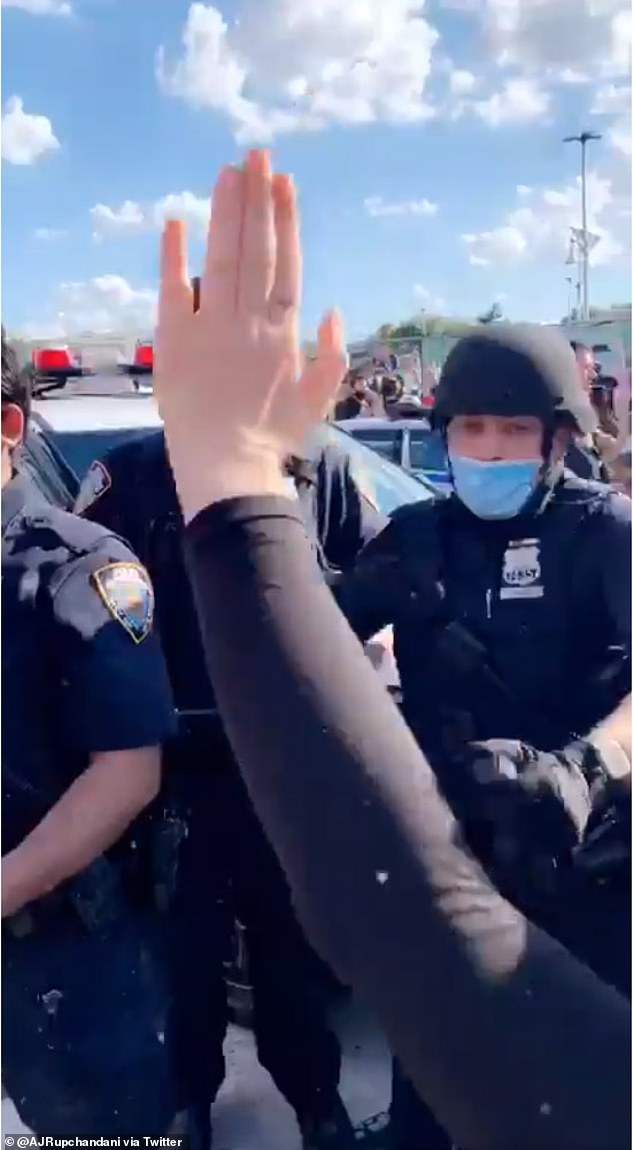 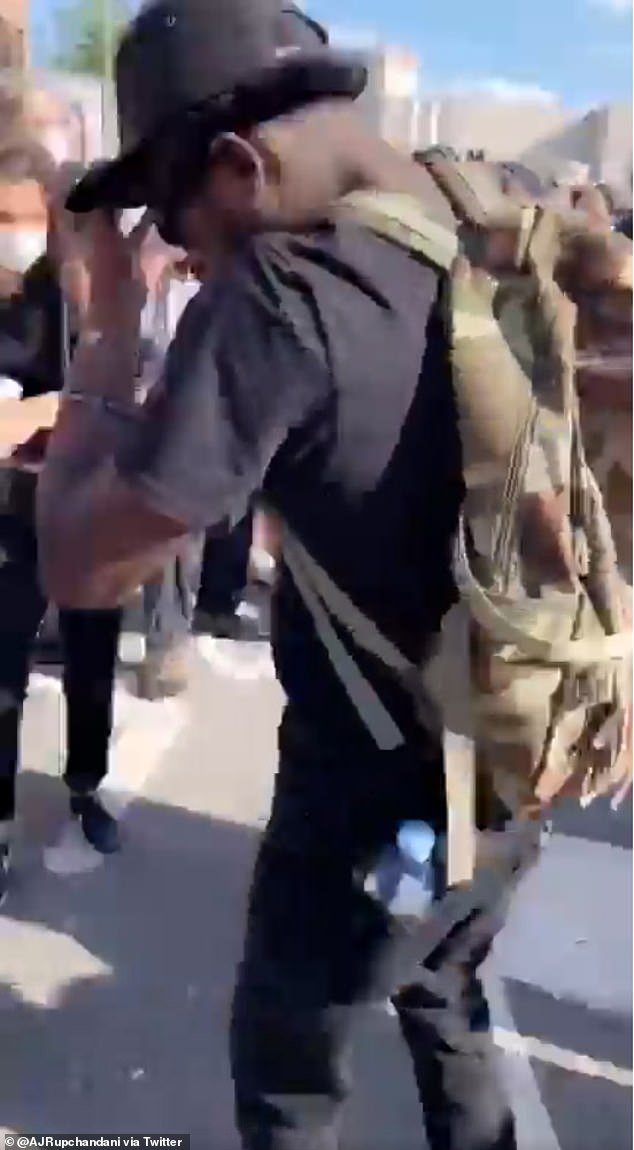 The man who was pepper sprayed is seen walking off, clearly affected by the blast

In another shocking video posted online, three police vehicles are seen speeding through the intersection of Prospect and Flatbush Avenues in Brooklyn, reports the Daily News.

Some of the people in the video, posted by Ella Ryan on Twitter, are seen throwing trash cans at the vehicles as they fly through the intersection crowded with demonstrators.

Two of the vehicles are pelted with trash cans and one is pushed to the side as by when demonstrators used a barricade to block its way.

‘They just want to kill someone,’ a woman’s voice is heard in the footage posted by Ryan, who describes herself as a mother of two and a climate change organizer.

‘My hands are shaking and I am sick to my stomach. I thought someone was going to die,’ she wrote in the tweet.

It was not clear if anyone was injured in either of the videos. An NYPD spokesperson did not immediately respond when DailyMail.com reached out. 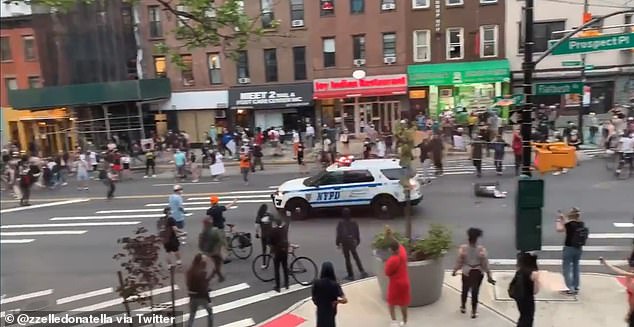 In another shocking video posted online, three police vehicles are seen speeding through the intersection of Prospect and Flatbush Avenues in Brooklyn. The first vehicle is pictured as it raced through the crowded intersection 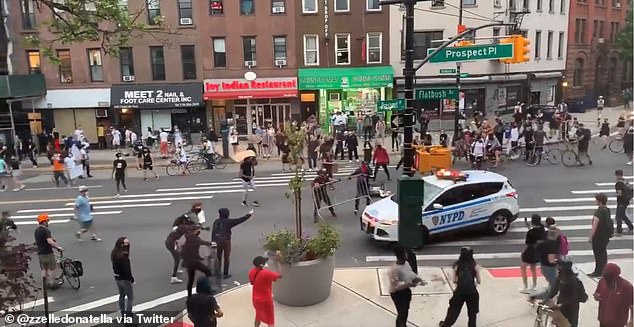 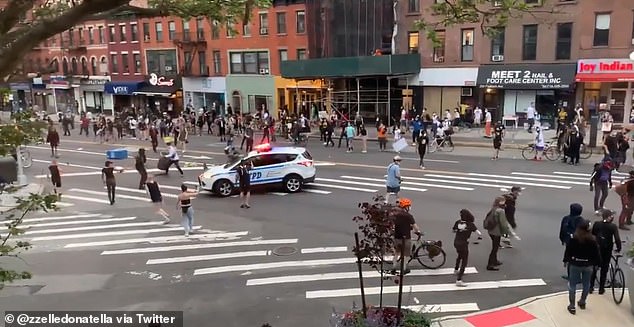 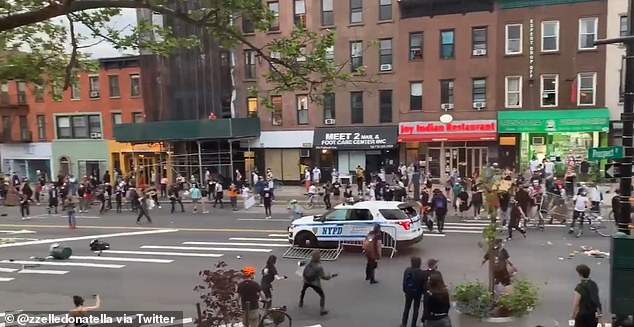 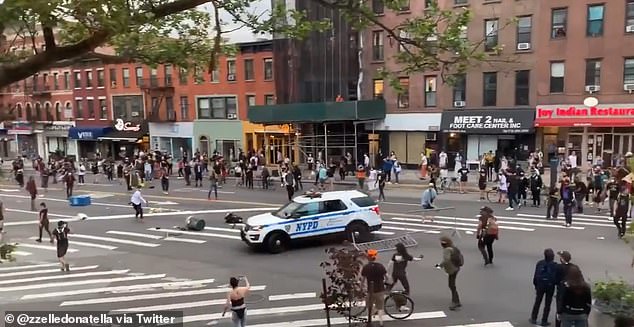 The third vehicle is pictured with protestors trailing behind, pelting it with garbage cans 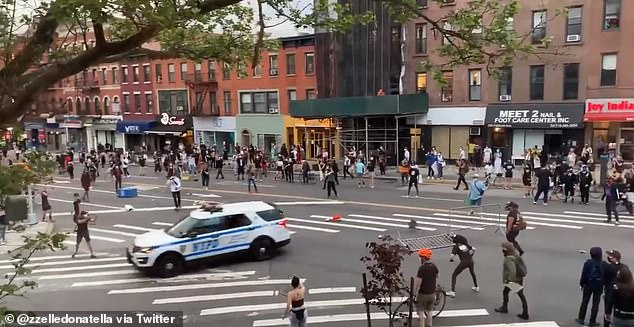 The protests have erupted in New York and in cities across the country after Floyd was killed during a police arrest in Minneapolis Monday.

New York’s Mayor Bill de Blasio late Saturday night blamed the violence in his city on a ‘small group of outsiders’ who sparked the fiery protests, reports the News.

‘Those who are engaged in violent activity will be arrested,’ de Blasio warned.

De Blasio said that another incident involving police vehicles and protestors was under investigation.

The incident, also caught on video posted online, showed two NYPD cruisers driving into protesters in Brooklyn who were pushing against a barricade against a police car and pelting it with objects. 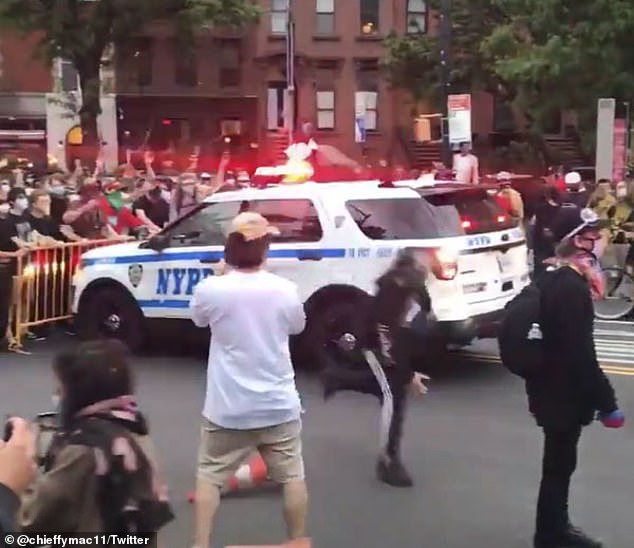 The first patrol car initially remained stationary in the middle of the road before demonstrators approached.

A second NYPD cruiser then pulled alongside the first but appeared to be in a rush to push through the crowds. Those gathered swarmed the second patrol car which then, without warning, suddenly began to accelerate.

It saw at least three people pushed to the side and almost run over and the police car drove on down the street.

From the footage posted online it does not appear that any of the protesters were knocked down, however there were plenty of screams as the car raced by.