Moment Tamworth schoolboy is set upon by fellow pupils

Shocking footage has surfaced of a defenceless schoolboy being punched and kicked in a unprovoked attack by several pupils.

The victim can be seen getting stopped by a taller pupil as he looks to leave at the end of the day at The Rawlett School in Tamworth, Staffordshire.

He can be seen backing away but he is followed by the pupil and others before one of them pushes him to the ground.

One of the pupils begins to throw numerous punches as the schoolboy looks to protect himself while being backed into a corner.

One of them can be heard saying ‘Don’t hit him yet’ as he tries to start a video recording on his mobile phone. 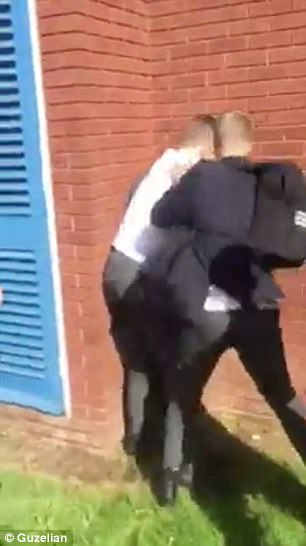 Numerous teenagers can then be seen joining in on the assault with kicks and punches as cries of laughter can be heard from the watching crowd.

A schoolgirl can be heard shouting ‘what are you all doing’ as the attackers seem to disperse.

The footage has been viewed over 800,000 times online after it was uploaded on to social media platforms.

One user, who posted the footage, said: ‘Jumping someone that clearly doesn’t want to fight!

‘I really hope that you’ve all done yourself proud. Don’t see how vile some people are. You deserve what you get lads.’

Bindy Howes posted: ‘This is absolutely outrageous. I’m sure their parents will be mortified when they see this.’

Police have revealed none of those involved would be taken to court as the victim had asked for no charges to be brought. 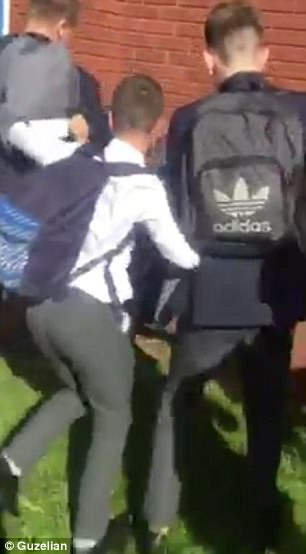 A Staffordshire Police spokesperson said: ‘We were called to reports of a 15-year-old boy studying at Rawlett High School in Tamworth having been assaulted by several children around 3:45pm on Monday September 11.

‘Since the report it has also come to our attention that someone has posted the video onto Facebook.

‘The boy attended Sir Robert Peel Hospital to have his injuries checked, although none of the injuries were serious.

‘Officers have spoken to the family and the school separately.

‘The victim’s wishes for no criminal proceedings have been recorded. Instead they are happy for the school to deal with the matter internally.

‘Therefore no further action will be taken by police.’

A Rawlett School spokesman said: ‘Staff picked up that a fight was taking place at the time and went to the scene immediately.

‘Parents were involved straight after the incident and the police have been informed.

‘As a school we will be fully supporting any police investigations over the next few days.

‘In accordance with school discipline policy we’ll be taking appropriate action with the pupils involved.

‘We have already planned discussions with all pupils to challenge such anti-social behaviour.

‘As far as the video is concerned, we were made aware it had been uploaded to Facebook within minutes and will be asking the original poster to remove it to protect the student involved.’