Horrifying moment thugs wielding huge knives rob two women as they set up a food truck outside a school – making off with $2,000

Masked thieves wielding large knives held up two women preparing food vans for the school lunch rush and made off with $2,000.

Dashcam footage taken in Clyde North, south-east Melbourne, on Wednesday at about 12.30pm showed the gang running towards one of the unsuspecting women as she got ready for service.

One of the thieves immediately went into the vehicle through the passenger door while another threatened the woman with a knife, the footage obtained by Nine News showed.

The ambush was over in seconds, with the thieves also making off with cigarettes.

‘I was just terrified and they kept screaming for me to give them the cash,’ victim Nicola Devereaux said.

Ms Devereaux and Anne Ruys were robbed as they worked on a roadside outside a school, waiting for its bell to ring to signal the start of lunch.

‘I saw Ann on the floor and they kept screaming at her to open the till,’ Ms Devereaux said.

‘I can’t believe kids this young can do something like this. Threatening two women, who are just going about their daily lives.’

Colin Lear, the owner of the food truck company Tasty Fresh Food Co., said in 40 years his trucks had never before been the target of thieves.

The shocking moment thieves wielding large knives (pictured) held up two women preparing food vans for the lunch rush and made off with $2,000 has been caught on camera

Dashcam footage (pictured) taken in Clyde North, south-east Melbourne on Wednesday at about 12.30pm showed the gang running towards one of the unsuspecting women as she got ready for service

‘(It’s) very disturbing to see what they went through and they were absolute champions with the way they dealt with it,’ Mr Lear said.

Despite the robbery, the two women put on a brave face and delivered the lunch service as normal.

Ms Ruys said it was important for the students to know they weren’t harmed in the incident. 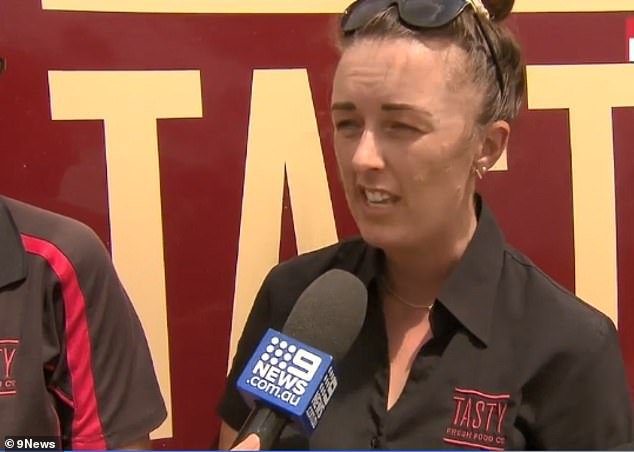 ‘I was just terrified and they kept screaming for me to give them the cash,’ food van worker Nicola Devereaux said

After robbing the women, police said the men drove away in a small white car.

‘The quartet who were all perceived to be of African appearance made off with cash and cigarettes,’ the spokesperson said.

‘The investigation is ongoing.’

Anyone with information that could assist police with their investigations is urged to Contact Crime Stoppers.