The heart-stopping moment two men clinging onto a water cooler were rescued from the water 12 miles off the Florida shore was captured by one of the fishermen who came to their aid.

Jeovanni Villacis and Yunior Pupo were out for a day of fishing in the Gulf of Mexico Sunday when they noticed a leak in the rear of their boat.

Within seconds, the 16-and-a-half-foot vessel flipped, leaving the pair scrambling to find something to keep them afloat.

They were kicking to stay afloat for between three to four hours and their legs had gone numb when a passing fishing boat happened to spot their water cooler.

The video of their miraculous rescue was posted to Facebook by Adam Vetter, one of the fishermen, who wrote, ‘what started out as a killer day of fishing ended in a way that I would have never imagined’.

Vetter was also with friends Rob Wells, Captain Fred Heidgerken and Joe Steplyk for a day of fishing when they came across a capsized boat about 12 miles from the coast of Hudson Beach in Florida around 6.30pm Sunday evening.

Although they could not see anybody, the boat was still anchored, and Vetter told WFLA that he ‘knew there were people out there’.

‘You know I said to him, there’s somebody out there,’ he said.

The group say they attempted to contact the Coast Guard to see if the capsized boat had called in but where unable to get a good signal.

‘We noticed there was no grass around the hull and no water lines, so it looked like it had happened recently. We marked the location and we continued back in to call the Coast Guard,’ Vetter wrote.

The group began to return to shore when shortly afterward they spotted something white bobbing in the water about a half mile from their boat.

In the rescue video, Vetter and friends are seen speeding toward the piece of debris as it becomes clearer.

The boat slows down as it draws closer to the cooler and the waving hands of Villacis and Pupo holding onto it.

‘Thank you,’ the two men cry, as they begin to drag themselves exhausted toward the rescue boat.

Jeovanni Villacis (left) and Yunior Pupo (right) were enjoying a day of fishing when they noticed water leaking into their boat. Within seconds, the boat had capsized leaving them clinging onto a water cooler and kicking to stay afloat, stranded in the Gulf of Mexico 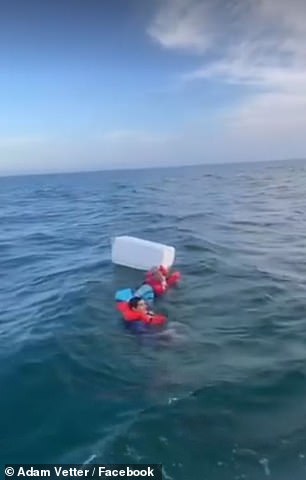 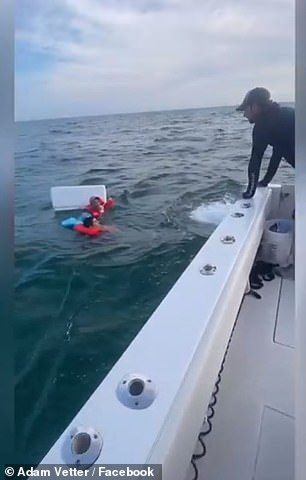 ‘We saw your boat,’ they explain as Villacis and Pupo lie on the floor and drag off their lifejackets.

‘We called it in to see if it was reported but we couldn’t get through to them.’

‘My wife and my daughter are outside in the beach,’ Pupo tells them, explaining that their families were on an island and not on the shore and able to report them missing.

‘Get them a drink,’ one of the rescuers comments.

Villacis and Pupo spotted that water was leaking into their boat and attempted to use a bucket to scoop it out but it was already too late.

‘I’m like, grab that cooler, don’t let it go. It floats. We need stuff that floats right now. So, he grabbed onto the side of the cooler,’ Villacis told WFLA. 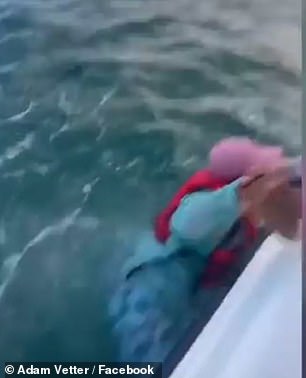 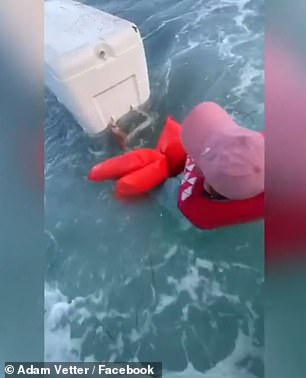 Yunior Pupo is shown here thanking the rescue boat as he struggles to swim to the side and pull himself on board. The two men are heard crying ‘thank you’ as the boat neared them 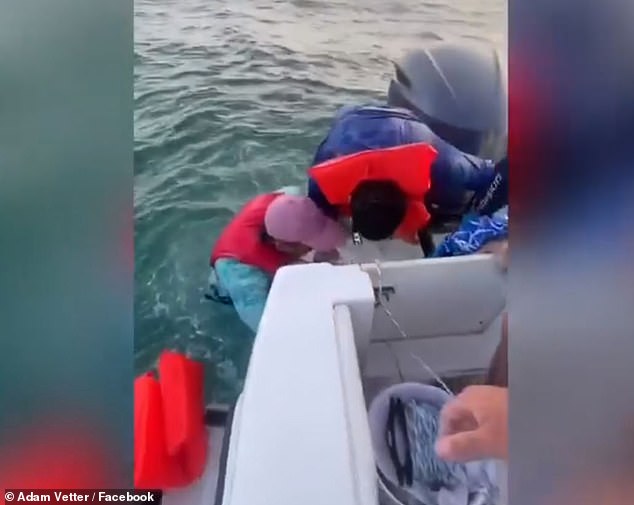 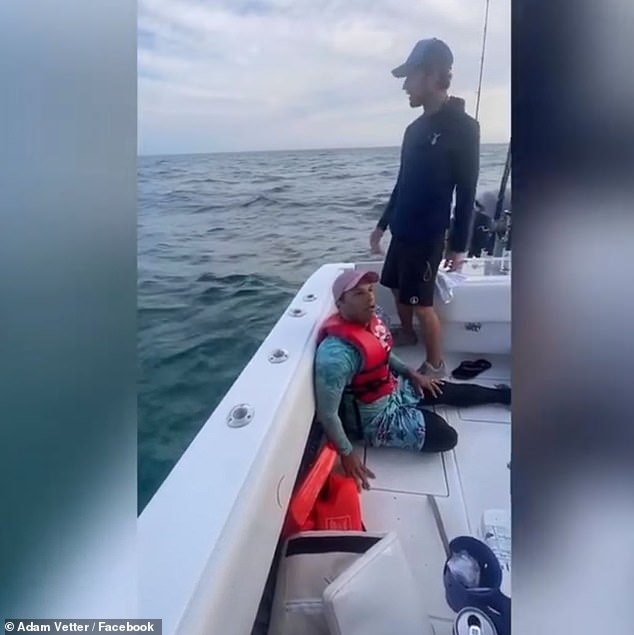 They clung onto the Coleman cooler that was holding all their catch and two lifejackets floated to the surface that they were able to put on.

Another boat had past within eyesight before Veller and crew came along, but they were unable to get their attention and the current was too strong to swim any closer.

‘At that point, I was just trying to stay calm. Keep him calm and keep myself calm,’ he added.

The pair remain thankful that their rescuers happened across them before it was too late and Villacis has said he now plans to get an alarm in case it happens again and may even start Coast Guard classes.

‘We are very grateful you guys were out there,’ he said, adding that he slept in the same bed as his wife and daughter that night.

‘I told everyone, I’m just grateful to be home,” said Villacis. ‘Slept together, all hugged together that night.’

Heidgerken told WFLA that the outcome could have been much worse if they hadn’t spotted the cooler.

‘Thank God they had that white cooler, that was the reason they were saved by us,’ Vetter said.

‘They probably had about another hour or so of daylight, and they dropped their family off at one of the islands while they went fishing so who knows when it would’ve been reported that they were missing that night.’