Mom’s car accident photo is an reminder for parents

A mother’s Facebook post showing her totaled car and two perfectly intact car seats serves as a chilling reminder to parents to buckle their children in correctly.

Jenna Casado Rabberman, from Lancaster, Pennsylvania, was driving her two children home from preschool when another car slammed into them.

Her 2015 Honda CRV was completely totaled, but the two children’s car seats remained in perfect condition and the youngsters unscathed.

‘You never think it will happen to you,’ Rabberman said. ‘My boys escaped without a scratch but the paramedics told me it could have been very different had I not taken the extra two minutes to be sure they were buckled correctly.’ 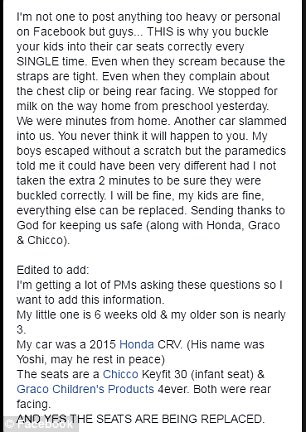 In the full post, Jenna Casado Rabberman explained the accident and the importance of safety

Rabberman emphasized the importance of buckling children into their car seats correctly, no matter how inconvenient it may be.

‘This is why you buckle your kids into their car seats correctly every single time,’ she said. ‘Even when they scream because the straps are tight. Even when they complain about the chest clip or being rear facing.’

Rabberman has two children, Beckett, who is almost three, and Brooks, who is six weeks old.

Her Facebook post has has been shared more than 228,000 times and received more than 51,000 comments so far.

Rabberman told ABC News said she’s a ‘pretty relaxed parent’ in most ways, but not with car seats.

‘I feel like it’s such an easy thing that I can do to keep them safe,’ she said. ‘I know that I would never be able to forgive myself if anything happened to my children because I didn’t take the time to do something so simple to protect them. I don’t think any parent could live with that.’