Monica Lewinsky has opened up about reliving the trauma of the Clinton scandal as a producer of Impeachment: American Crime Story, revealing she hired a therapist to sit with her on Zoom while she reviewing her notes on the series chronicling the darkest period of her life.

The anti-bullying advocate, 48, was just 22 when she had a sexual relationship with then-President Bill Clinton as an unpaid White House Intern. News of the affair rocked the nation in the late ’90s and led to the president’s impeachment, turning Lewinsky into tabloid fodder for decades.

In a new interview with The Hollywood Reporter about the upcoming series, Lewinsky spoke about her motivation to participate in the creation of the show and why she advocated for an infamous thong-flashing scene that was initially left out of the script to protect her.

‘I’m not proud of the choices I made back then, but I am proud of the show,’ she told the outlet. ‘And if I liked everything that was in the show, then everybody didn’t do their job.’

Monica Lewinsky, 48, opened up to The Hollywood Reporter about reliving the trauma of the Clinton scandal as a producer of Impeachment: American Crime Story 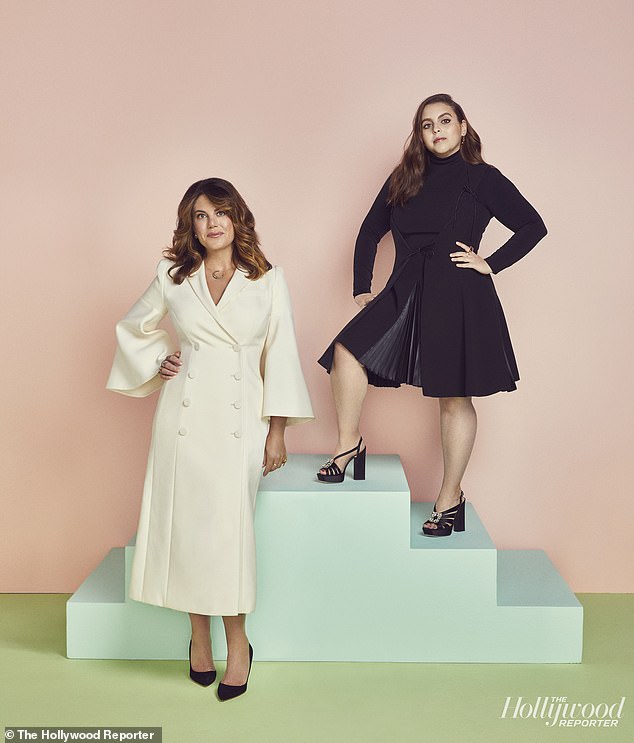 Difficult: Beanie Feldstein (right) was cast as Lewinsky (left), who hired a therapist to be available on Zoom while she worked on her show notes ‘because it’s hard’

Lewinsky first learned that Ryan Murphy would be taking on the sex scandal in an upcoming installment of his anthology series in early 2017, and she was admittedly panicked by the thought of reliving the trauma of that time.

‘You go to bed one night a private person, and the next day you’re a public human being and the whole world hates you. And you might go to jail. And you’re going to bankrupt your family. And, and, and…’ she recalled.

‘And just because I wasn’t on the news every night for 20 years in the same way that I was in 1998 doesn’t mean that this story ended. Ten years on, I still could not get a job. I couldn’t support myself.’

When Murphy pitched Impeachment to her, he explained that the series would reframe the political thriller from the perspective of the women involved: Lewinsky, Linda Tripp, and Paula Jones.

He offered to make her a producer and promised he would let her consult on everything from the scripts to the set. Murphy also insisted he wouldn’t make the series without her approval.

According to THR, it took one run-in, several phone calls, and a dinner to get Lewinsky to reconsider getting involved with the project.

While Lewinsky is pleased overall with how the 10-episode series turned out, it was retraumatizing for her to watch the cast reenact her public humiliation. 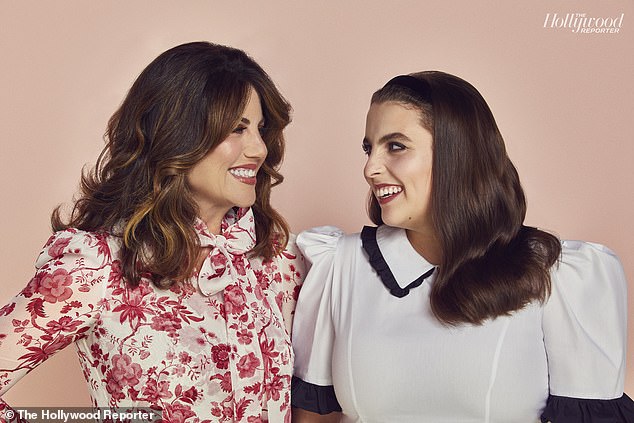 Dedicated: Lewinsky pushed for a scene in which her character flashes her thong to Bill Clinton, explaining it out would be ‘unfair to the team and to the project’ to leave it out 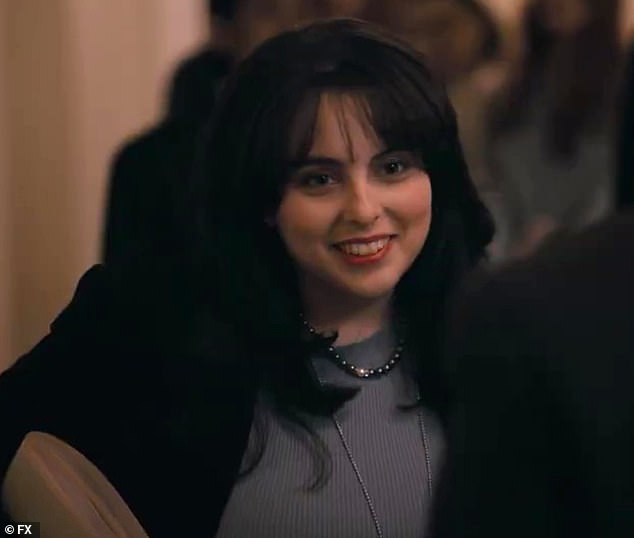 Role of a lifetime: Feldstein (pictured as Lewinsky in the series) said she is ‘deeply protective’ of the former intern, who was never on set while she was in character

The former intern said she hired a therapist to be available on Zoom while she worked on her show notes ‘because it’s hard.’

‘It’s really hard,’ she stressed, ‘especially with the dramatic license that needs to be taken…’

American Crime Story producers have discouraged actors from contacting the characters they were playing, but Lewinsky was the exception as she was under a gag order for most of the scandal and went unheard.

Murphy cast Beanie Feldstein to play Lewinsky, and the two met for the first time in March 2020 at Lewinsky’s New York City apartment, where they bonded over being Jewish girls from Los Angeles and their love of show tunes.

Feldstein told THR that she is ‘deeply protective’ of Lewinsky, who was never on set while she was in character.

Scriptwriter Sarah Burgess felt the same way, and she initially left out a scene in the script, in which Feldstein as Lewinsky, flashes her thong to Clinton at an event. The moment was featured in the Starr Report, but Burgess told THR that she worried about ‘retraumatizing Monica.’

However, it was actually Lewinsky who read the script and pushed for her to include the scene in keeping with the integrity of the story they were trying to tell. 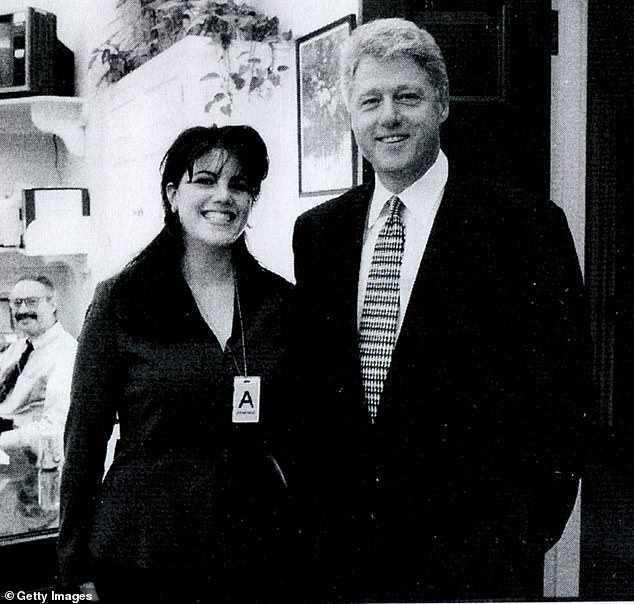 Scandal: Lewinsky had a sexual relationship with then-President Clinton as a 22-year-old unpaid White House intern, and the affair led to his impeachment in 1998 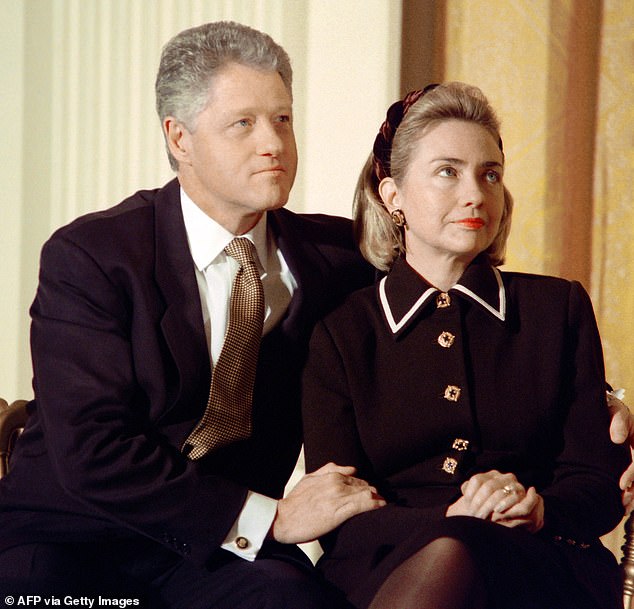 Not comfortable: Lewinsky didn’t weigh in on any scenes featuring intimate moments between Bill and Hillary (pictured in 1997), saying she held back for ‘myriad, obvious reasons’

‘Listen, I would’ve loved to have been really selfish and said, “That’s great that you guys think we don’t have to show that, fantastic,” but I’m incredibly experienced in understanding how people see this story,’ said Lewinsky, who felt she would be held responsible for the scene’s absence, whether or not that was true.

‘So, ultimately, I felt two things: One was that I shouldn’t get a pass because I’m a producer; and two, that it was unfair to the team and to the project because it would leave everybody vulnerable.’

Lewinsky was able to share her input on every scene in the latest installment of American Crime Story while working with Burgess.

She shared her personal backstory and offered notes on the language that Clinton would use with her. She even suggested a more sensitive depiction of Jones (played by Annaleigh Ashford), but she didn’t weigh in on any scenes featuring intimate moments between Bill and Hillary Clinton, saying she held back for ‘myriad, obvious reasons.’

THR reported that nobody involved with Impeachment ‘has heard a peep’ from the Clintons about the upcoming show, and many don’t expect to.

‘Bill and Hillary have both spoken and written books about this time in their lives, and they’ve had the opportunity to weigh in meaningfully and thoroughly with their feelings,’ Walt Disney Television chairman of entertainment Dana Walden told THR.

‘I also think that it’s fair and it’s right for there to be an opportunity for the women who were involved in this scandal to be able to have their truth told, beginning with Monica.’

Lewinsky said she is ‘nervous about being misunderstood again,’ but she hopes that the show will make for a better future. 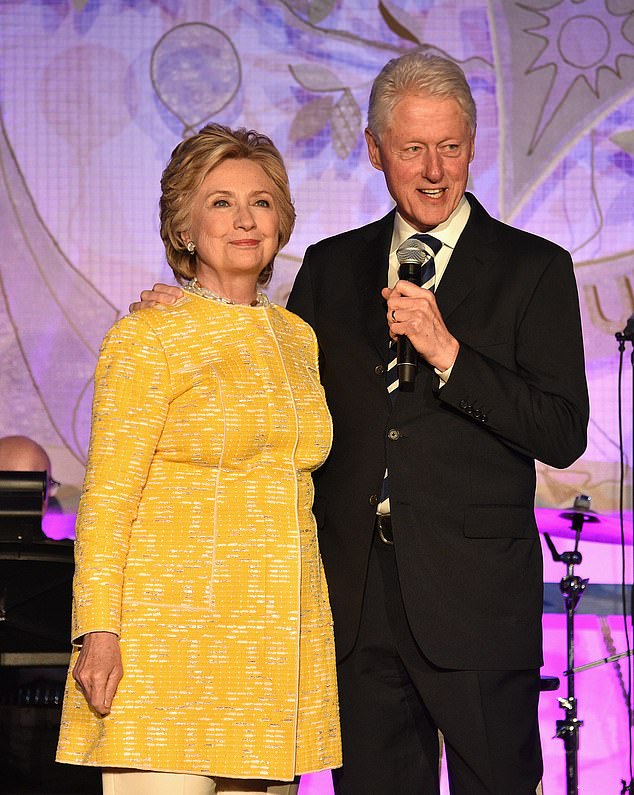 Silent: THR reported that nobody involved with Impeachment ‘has heard a peep’ from the Clintons about the upcoming show 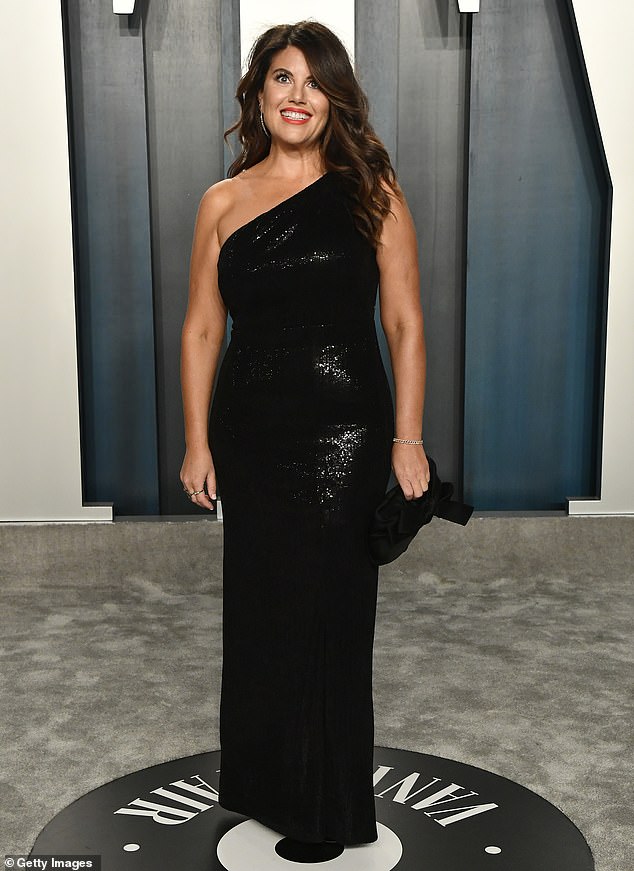 Goal: Lewinsky said she is ‘nervous about being misunderstood again,’ but she hopes the show will ensure that ‘this never happens to another young person again’

‘Of course I have a number of selfish reasons for wanting to participate,’ she said, ‘but a big goal for me is that this never happens to another young person again.’

Feldstein recently opened up about playing Lewinsky in a new cover story for W Magazine, saying she was deeply moved by her story.

‘I felt gutted by some of the things that Monica went through,’ she said. ‘My task is to be Monica’s bodyguard—to put my body in front of hers. It’s my job to portray her pain, because I feel so much for her.’

Feldstein, who has been in a relationship with film producer Bonnie Chance Roberts since 2018, felt connected to Lewinsky in a number of ways but noted it was complicated playing her as a queer woman.

‘We’re both Jewish girls from L.A. who listen to show tunes on the treadmill!’ she explained. ‘But still, I never felt less in my comfort place than when I was playing Monica. Obviously, I’m queer, so I don’t know if I’d flirt with the president, but who knows?’

Feldstein said that she would likely have done the same thing Lewinsky did regarding her affair with Clinton, who was 27 years her senior.

‘When Clinton shined his light on you, there was no better feeling in the world,’ she added. ‘It wouldn’t matter if you were male, female, nonbinary, queer. When that man put his spotlight on you, the world fell away.

‘And if I was 22 and the most powerful person in the world focused his high beams on me, I would probably do the exact same thing as Monica.’