Mo’Nique gets schooled by Whoopi Goldberg

Mo’Nique got schooled by Whoopi Goldberg over how Hollywood works when she appeared on The View last Thursday to chat about refusing a $500,000 offer from Netflix for a comedy special, leading her to boycott the streaming giant.

The 50-year-old insisted the company has a ‘gender bias and race bias’, pointing to Chris Rock and Dave Chappelles’ $20 million offers and Amy Schumer’s $13 million payday.

Amid her boycott, Mo’Nique’s other ventures are struggling.

The Oscar-winner’s comedy shows are being heavily discounted and cities are canceling her new play, DailyMail.com can reveal.

Her Mother’s Day comedy show is already 30 percent off on Groupon and her new play has been shuttered in at least four cities, including her hometown of Atlanta, due to dismal sales.

Whoopi pulled Mo’Nique aside after the show to give her a private pep talk and some career advice but later said there was no reasoning with her.

Mo’Nique (left) received a backstage pep talk from Whoopi Goldberg after appearing on The View last Thursday. The actress and comedienne is struggling to sell tickets to her comedy shows and plays. Pictured: The two women in 2015

A spokesperson for Mo’Nique told DailyMail.com that she isn’t concerned about ticket sales and it’s too far in advance to make judgement calls on numbers.

The rep said: ‘This is the third annual year for the show, and it’s par for the course. Shows are in May and it’s February right now.

‘It doesn’t matter if tickets are on Groupon if it gets people in the door. Times are tight for everyone.’

Whoopi’s backstage pep talk came after the two women had a tense exchange on set, with Whoopi telling Mo’Nique she would have ‘schooled’ her on how the industry works.

A source at ABC said Whoopi then met with Mo’Nique privately and tried to encourage her to take a different approach to Hollywood.

Though the details of their conversation were not disclosed to anyone at the show, apparently Goldberg did concede there is no reasoning with Mo’Nique.

Mo’Nique had stopped by the show to talk about Netflix’s ‘gender bias and color bias’, after calling out the company on Instagram over her comedy special offer compared to other comedians.

Although she pointed to the deals that Rock, Chappelle and Schumer obtained, they have all recently been on large-scale tours and had favorable sales.

Meanwhile, she has only been playing solo dates at comedy clubs and occasional small theater shows with a group of comics. 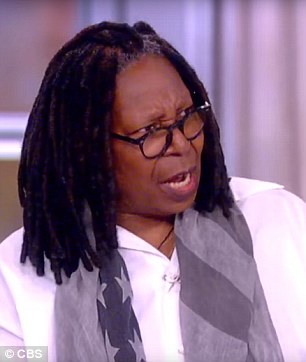 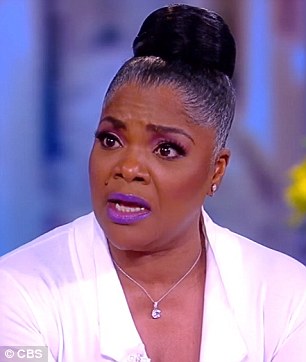 The EGOT-winner tried to give Mo’Nique a pep talk and career advice but later conceded there was no reasoning with her. Pictured: Mo’Nique on the talk show on Thursday 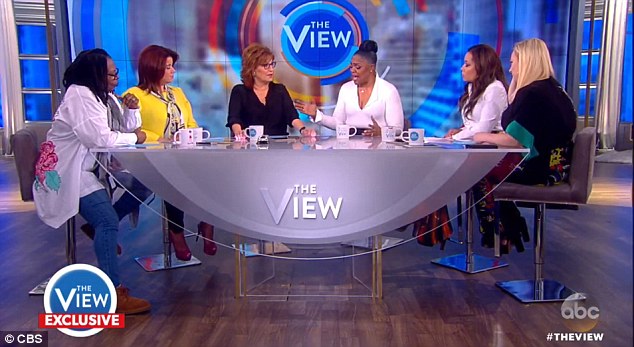 Mo’Nique told The View hosts she was blacklisted in Hollywood by Oprah, getting herself into a heated exchange with Whoopi. She was on the show to chat about her Netflix boycott

Her upcoming Mother’s Day Comedy Special on May 12 at The Apollo Theater in New York is already listed on Groupon for 30 percent off its $80.35 ticket price at $56.

A Hollywood executive told DailyMail.com: ‘Mo’Nique has been generating a lot of press for her boycott, but despite radio shows, TV shows and websites wanting to interview her and giving her coverage, ‘It’s clear because of low ticket sales that even her remaining fans aren’t interested in buying tickets to see her perform.

‘Though she was once considered one of Hollywood’s funniest African-American female comics, now she’s seen more a troublesome train wreck always complaining about something.’

In a shocking move, the 50-year-old talent signed on to star in a touring play called The Neighborhood Barbershop, which is loosely based on the ‘Barbershop’ film series, though not an official licensed-theatrical version of the movie.

A source said: ‘The idea of Mo’Nique doing this type of touring play is unthought of for someone of her caliber. Especially a woman who calls herself, ”the most decorated comedian alive.”

‘It is an obvious money-grab, however the pay for a play like this is at best $30,000 a week; so even after multiple cities she won’t make as much as Netflix was offering her for a comedy special,’ they explained.

Although Mo’Nique claimed she ‘put butts in seats’, her Mother’s Day comedy special is currently 30 percent off on Groupon (pictured) 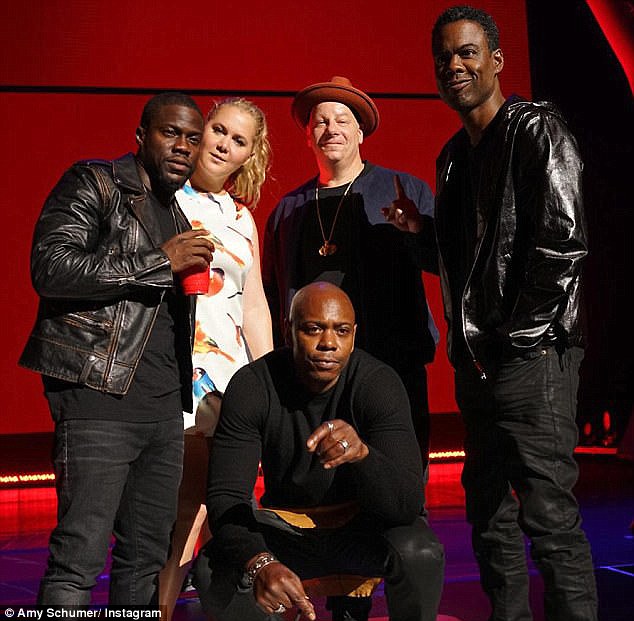 The 50-year-old launched a boycott against Netflix after refusing a $500,000 bid from the company to do a comedy special when she learned Chris Rock (right) and Dave Chappelle (bottom center) pocketed $20 million and Amy Schumer made $13 million in their deals

On the same day she appeared on The View, at least four cities canceled the play due to low ticket sales, including Atlanta, which is particularly embarrassing, since Atlanta is where Mo’Nique actually lives.

Other cities on the tour, such as Pittsburgh, are already listed on Groupon for as much as 30 percent off the ticket price.

A source said: ‘Clearly the promoter of this show thought she was going to sell tickets. But with several cities canceled, this has to be a financial disaster for this show.

‘Don’t be surprised if they end up pulling the plug on this play before the end of its run.’

Though the streaming network does not disclose its negotiating practices, a Hollywood executive with knowledge of how the company works, says a clear determining factor for Netflix or any company is getting a return on their investment.

A source told DailyMail.com: ‘If Mo’Nique can’t sell out comedy clubs, small theaters and can’t sell tickets to a touring play, how the h**l is she going to guarantee eyeballs on a network comedy special?’ 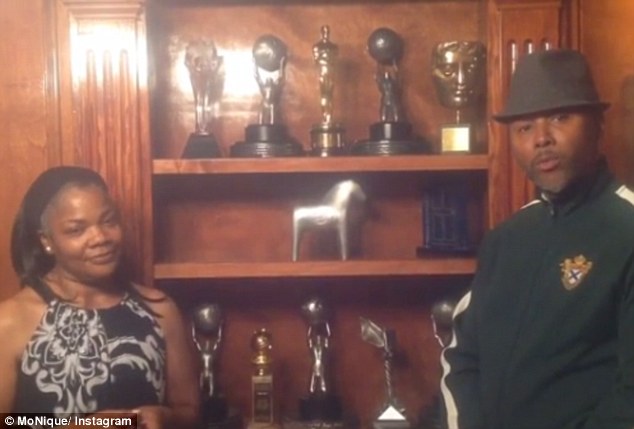 Support: Comedienne Wanda Sykes responded to Mo’Nique’s video on Twitter by revealing she went elsewhere after being offered just $250K for her show

Before her private chat with Whoopi, things turned tense when hosts revisited the eight-year-old story about Mo’Nique being branded difficult for failing to promote her Oscar-winning role in Precious.

Mo’Nique continued her ongoing claims that Oprah Winfrey, Tyler Perry and Lee Daniels blacklisted her because she wanted to be compensated a reported $100,000 an appearance to promote the film at film festivals leading up to her award show season.

Usually, Hollywood stars are not compensated for promoting their film projects, as it is considered a responsibility of the existing work on the project.

Studios do incur all travel and lodging expenses and give their talent a daily stipend for eating and other incidentals while promoting. 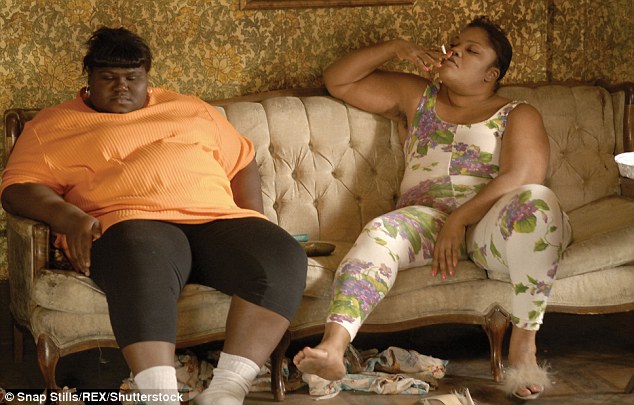 Mo’Nique continued her ongoing claims that Oprah Winfrey, Tyler Perry and Lee Daniels blacklisted her because she wanted to be compensated a reported $100,000 an appearance to promote Precious (pictured in a still from the movie) at festivals leading up to award season

Mo’Nique said: ‘What Tyler Perry showed me, Lee Daniels, Oprah Winfrey and Lionsgate is that, ”When you don’t do what we ask you to do, we will take your livelihood”.’

The comedienne then attempted to equate her situation to the Harvey Weinstein sexual assault scandal, and that’s when Goldberg pushed back.

‘I’m going to stop you because contractually, when you make a movie, regardless of who you sign the deal with, your job is to go and promote said movie,’ explained Goldberg, who’s won an Emmy, a Grammy, an Oscar and a Tony Award.

‘And we’ve had this conversation, and I said if you had called me, I could’ve schooled you on what was expected.’

Mo’Nique tried to argue back with Goldberg, but the segment ran out of time and Goldberg tossed to a commercial break.