Monster thunderstorms, 39C heat and SNOW in the east coast of Australia

NSW was a ‘state of extremes’ as severe storms lashed Sydney, downing trees and powerlines and cutting off power to thousands of homes, while snow fell in Thredbo and parts of the state sweltered.

Nearly 50,000 homes are still without power, according to Ausgrid.

Winds reached up to 104 km/h at Fort Denison, 96km/h in Holsworthy and 95 km/h in Sydney Harbour.

Hail fell in the Sutherland region, according to the Bureau of Meteorology.

Towering trees fall on a home in Gordon, north of Sydney, during a freak storm on Tuesday afternoon 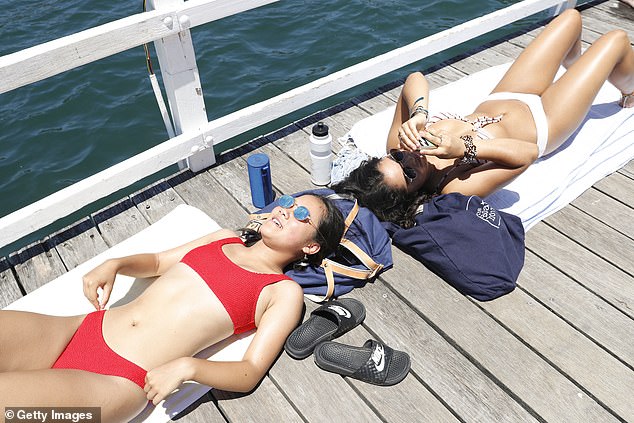 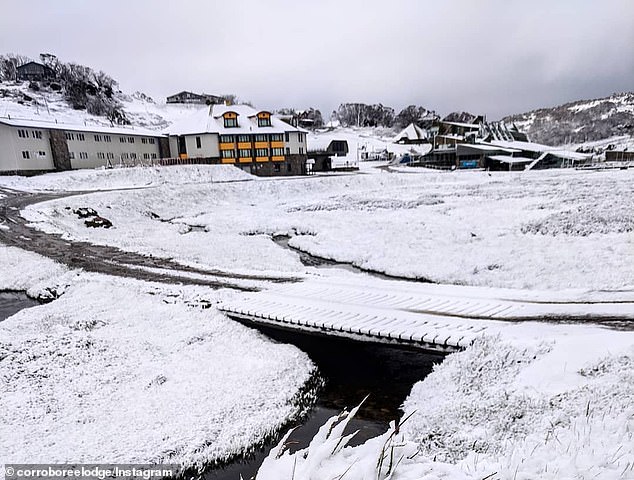 Meanwhile, snow fell in Thredbo (pictured), despite hot temperatures in other parts of the state

Other parts of the state also reached temperatures in the mid to high 30s, including 35.4C recorded in the heart of the city at the bureau’s weather station on Observatory Hill.

By Tuesday evening, power had only been restored to about 4,000 Ausgrid customers.

Extended outrages due to ‘extreme damage’ were expected.

‘Those who rely on continuous power supply for medical or life support equipment should consider back up plans today,’ the power company wrote on Twitter.

Ausgrid also warned people to stay well away from downed trees and powerlines as it responded to more than 780 hazards.

Some further 20,000 Endeavour Energy customers also lost power with crews working to restore supply to 5000 customers mainly in the Macarthur and Hawkesbury regions, the company said in a statement on Tuesday evening.

The severe weather also caused chaos for the afternoon commute. 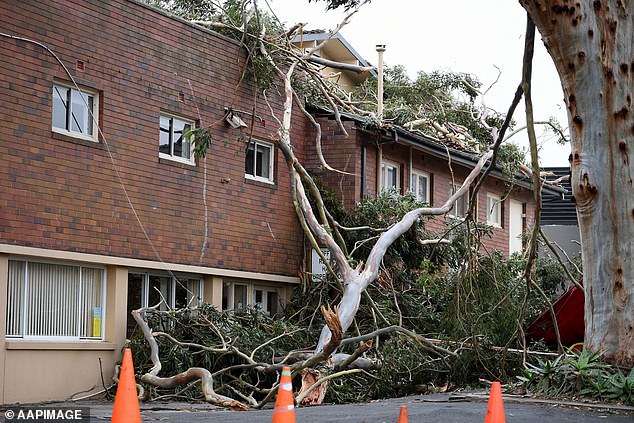 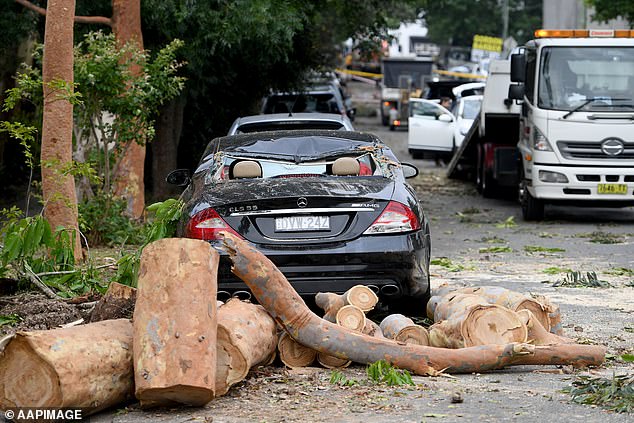 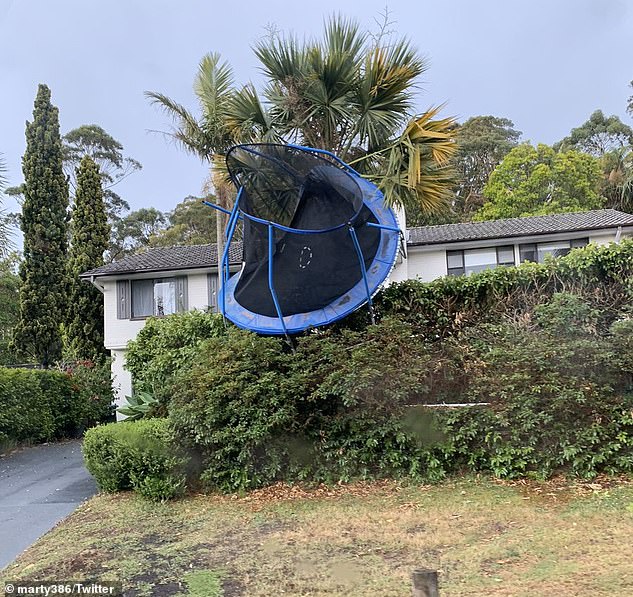 Trains were stopped in sections of the North Shore and Central Coast and Newcastle lines, Transport for NSW said in a statement on Tuesday afternoon.

Those were running again by Tuesday evening while in Sydney’s north a number of road lanes remain closed due to fallen trees and traffic lights remain blacked out. 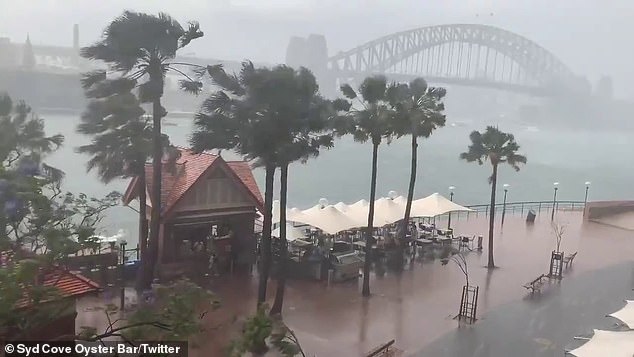 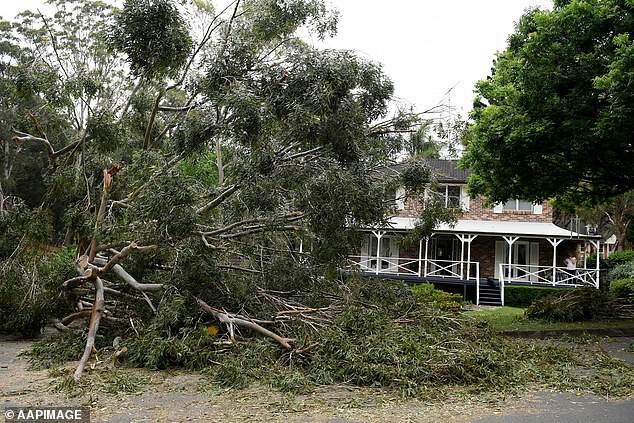 By early Tuesday afternoon most of the storms had moved through Sydney and were headed north to the Central Coast and Hunter regions, BOM posted on Twitter.

Strong and gusty westerly winds were affecting parts of the state’s southeast on Tuesday evening and aren’t expected to ease until later on Tuesday night.

Major Sydney arterial roads were blocked by uprooted trees – including Mona Vale Road and the Pacific Highway near Pymble. 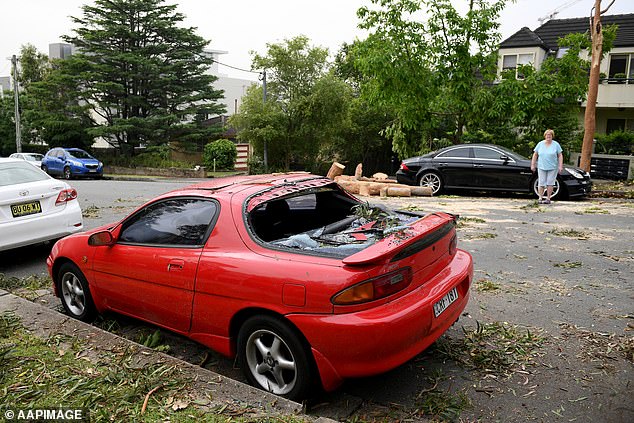 The NSW Rural Fire Service are working to clean up the damage from the freak ten-minute storm, which was propelled by winds of more than 90km/h.

A home in Bondi had its roof completely blown off, while hail hammered parts of the north shore and eastern suburbs.

In Gordon and Pymble, trees were knocked down on almost every street. 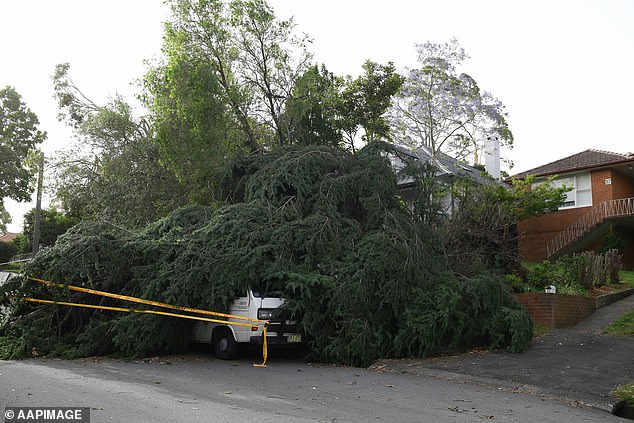 A car is obscured by a fallen tree in Gordon, north of Sydney