‘Monster’ who butchered boy jailed for life in Germany

A psychopathic ‘monster’ who butchered a nine-year-old boy and wrote online that ‘killing the neighbour’s child didn’t feel too bad to be honest’ has been jailed for life in Germany.

Marcel Hesse, 20, was found guilty of slaughtering his young neighbour Jaden and one of his own internet friends in the town of Herne, in the north-western German state of North Rhine-Westphalia, in March last year.

Hesse was dressed completely in black as he walked into the courtroom wearing handcuffs before he was sentenced by the Bochum court to life in prison with a ‘conditional preventive detention’.

There was a nationwide manhunt for the killer who posted disturbing pictures and messages relating to the murders on the dark net in a crime that shocked the country.

Psychopathic ‘monster’ Marcel Hesse (left, being led into court today) who butchered a nine-year-old boy and wrote online that ‘killing the neighbour’s child didn’t feel too bad to be honest’ has been jailed for life in Germany 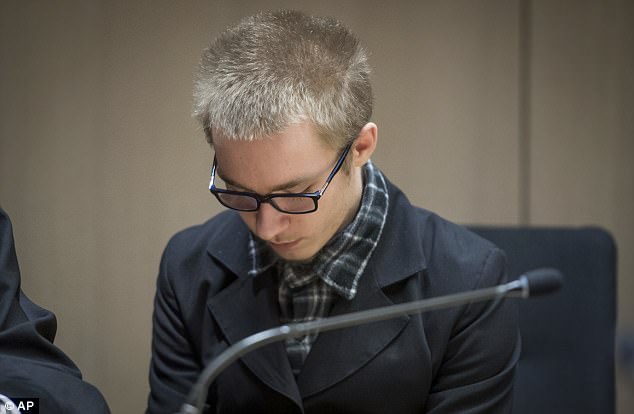 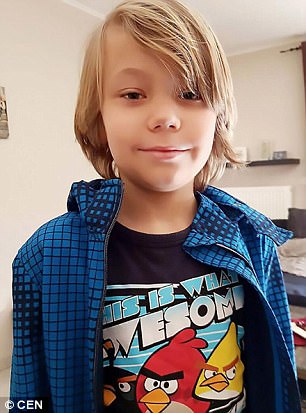 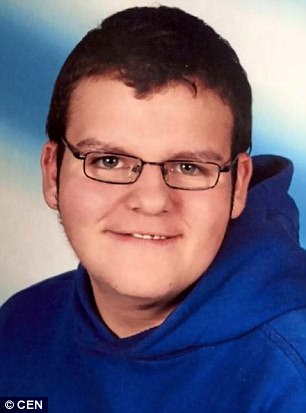 Sadistic Marcel Hesse, 20, was found guilty of slaughtering his young neighbour Jaden (left) and one of his own internet friends, Christopher W (right) in the town of Herne, in the north-western German state of North Rhine-Westphalia, in March last year

On the day of the first murder, Hesse asked Jaden if he could help with a ladder, only to stab him 52 times in a cold-blooded murder, posting footage of the act on the dark net.

After Hesse killed Jaden, he went to visit his friend Christopher W., who lived in the same town. They played computer games, ate pizza and went to sleep.

Hesse, who was rejected by the German army for being unstable, then killed Christopher W. after his friend saw his face on TV as a suspect in the boy’s murder, fearing that he might call police and give away his location.

Hesse stabbed him 68 times and is even said to have rammed a pen into his back. Photos of this killing were also shared on the dark net.

Two days later Hesse gave himself up to police, bringing an end to one of the largest manhunts in recent German history.

Hesse uploaded a shocking manifest to the infamous internet message board 4chan just after he had killed Jaden. 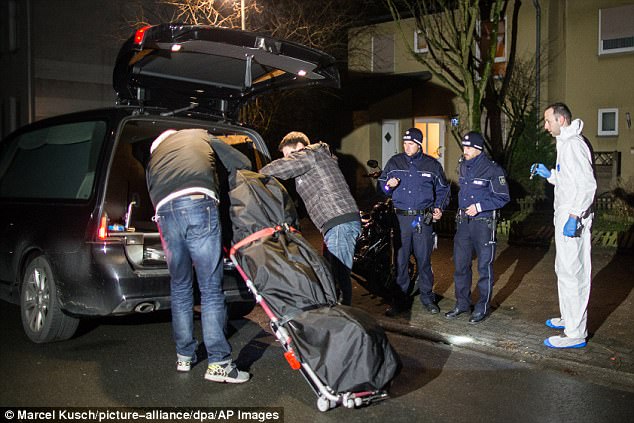 The body of the boy was discovered by police in the cellar of a house by his stepfather. Police and forensics are pictured taking the body away 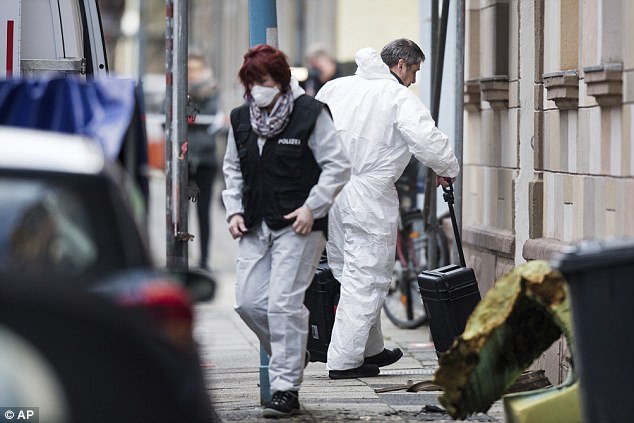 Investigation: Forensics descended on a flat in Herne, Germany after police discovered a body inside

The manifest read: ‘To kill someone is just a series of movements.

‘To produce the wound, to keep the victim from defending. To give the mortal blow and wait for the victim to be dazed.’

In his message, there were also Japanese words from the worlds of anime and video games.

Before the trial, police described him as a ‘brutal killer’ and said he had admitted both crimes.

The teenager is believed to have taken shocking video and photos of Jaden’s murder before posting it on the ‘dark web’ of the Internet and going on the run sparking a massive police manhunt.

He also shared messages and photos on WhatsApp and in online chat rooms and some of that material was later posted back on to the dark web.

In one message on an internet chat room, he wrote: ‘I have cut myself in the hand as I fought the 120kg beast’.

Pictures show him washing a knife and posing for a selfie with blood on his hands while in another message he boasted: ‘I know that people die slowly when you slaughter them.’

Another chilling note believed to have been posted by Hesse was translated as saying: ‘I just killed the neighbour’s child, doesn’t feel bad tbh, my hand bleeds lil’ which is the only thing annoying me. 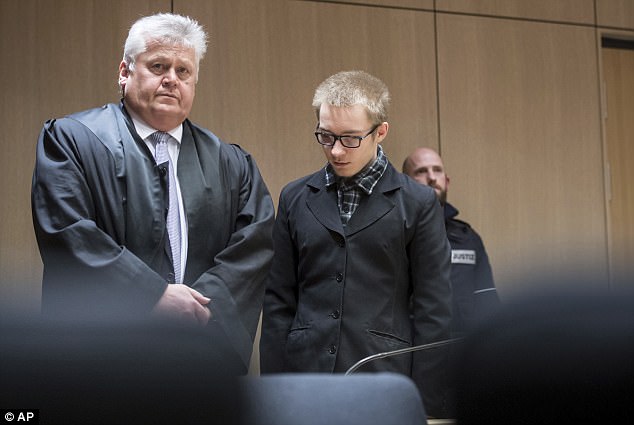 On the day of the first murder, Hesse (centre) asked Jaden if he could help with a ladder, only to stab him 52 times in a cold-blooded murder, posting footage of the act on the dark net 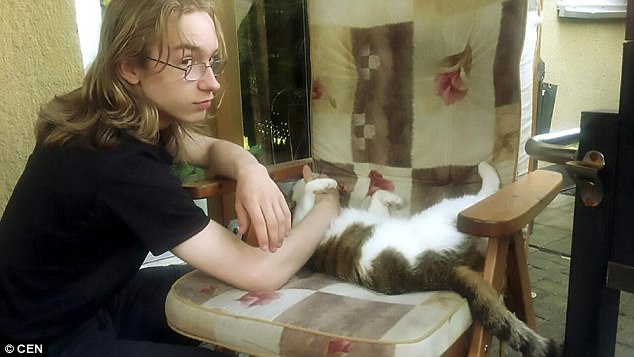 The nationwide manhunt for the killer, one of the largest in Germany’s recent history, and the fact that the killer posted disturbing pictures of the murders on the dark net, shocked the country

‘I actually wanted to get a girl in here so I can rape her.’

The court this week discussed whether Hesse should be tried as an adult or under juvenile criminal law, which in Germany is common under the age of 21.

In the end, the Bochum court decided to sentence Hesse according to adult law after hearing the testimony of a forensic psychologist.

He was sentenced to life in prison with a ‘conditional preventive detention’.

In Germany, a life sentence without such a preventive detention would otherwise mean that a convict is automatically released after serving 15 years.

With its ruling, the court followed the demands of the public prosecutor’s office as it noted the sheer brutality of the murders as reasons for the severe punishment.

Dr Sabine Nowara argued that Hesse ‘at the time of the crime was not the same as a teenager’.

Even though the defendant looks ‘youthful’, Nowara said that his personality was already well-developed.

Nowara said that especially the ‘psychopathic, narcissistic and sadistic’ elements she found in Hesse’s behaviour were worrying, which according to her puts a trial under juvenile law out of the question.

Last month, a prison doctor who watches over the health of Hesse, and examined him together with a psychiatrist shortly after he was first detained, also told the Bochum court about Hesse’s horrific character.

The doctor said: ‘After Hesse told my colleagues and me about his deeds, the psychiatrist told me: ‘That is a monster’.’

According to the prison doctor, Hesse is almost exclusively found standing next to the fence with his eyes closed when prisoners are allowed out of their cells for a short break.

The doctor said: ‘He is very meticulous, which shows itself during mealtime.

He puts butter on six pieces of bread, cuts off the bread crust and places it accurately on the edge.’