Montecito mega-mansion near Harry & Meghan for sale for £45m

A spectacular mansion in California’s Montecito Ranch Lane is up for grabs for an eye-watering $55million dollars, the equivalent of £45million.

The property is called Bella Vista Polo Ranch and sits on 20 acres of land, between the Santa Ynez mountains and the Pacific Ocean.

It is only a minute away from the beach and has breathtaking views of the ocean, as well as of the the sunrise and sunset.

The property is fit for a duchess and is, indeed, just a short drive from the Duke and Duchess of Sussex’s home in California.

The mansion in California’s Montecito Ranch Lane is on the market for an eye-watering $55million dollars, the equivalent of £45million 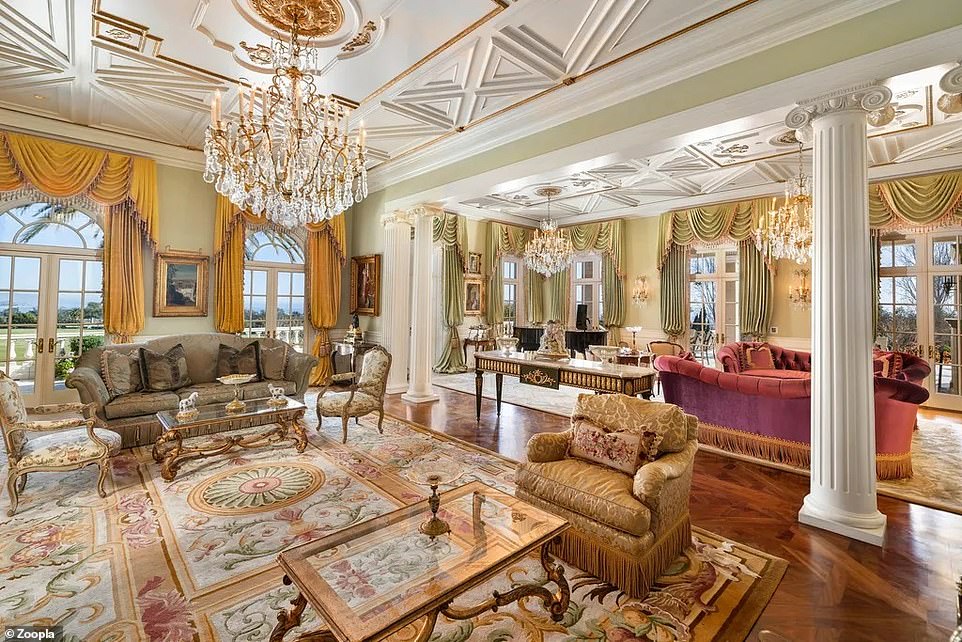 The grand property has opulent living areas, including a massive ‘ballroom’ that can accommodate 200 guests 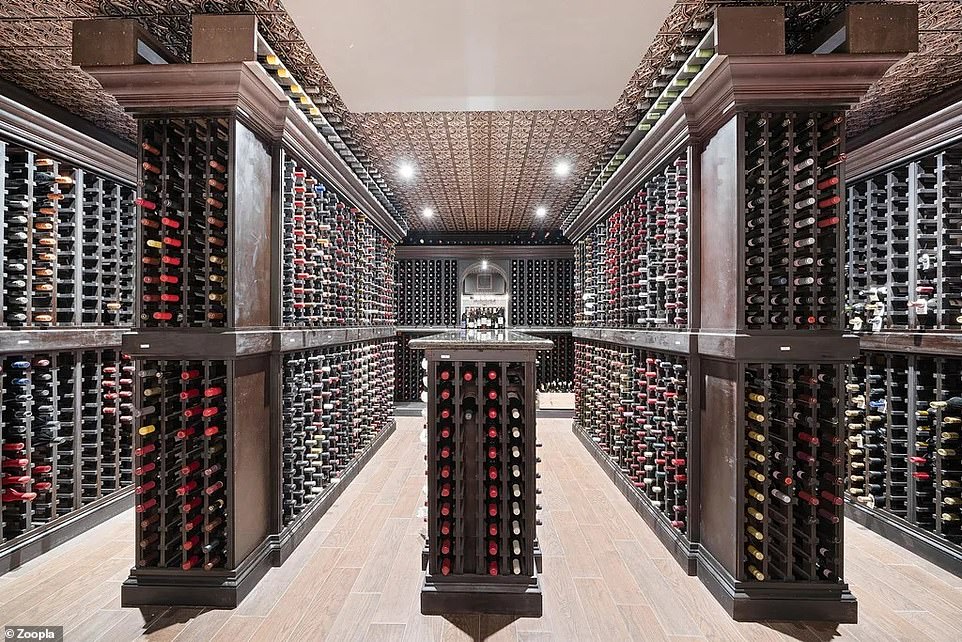 The house boasts an impressive wine cellar and tasting room that can accommodate thousands of bottles – up to 5,000 in total 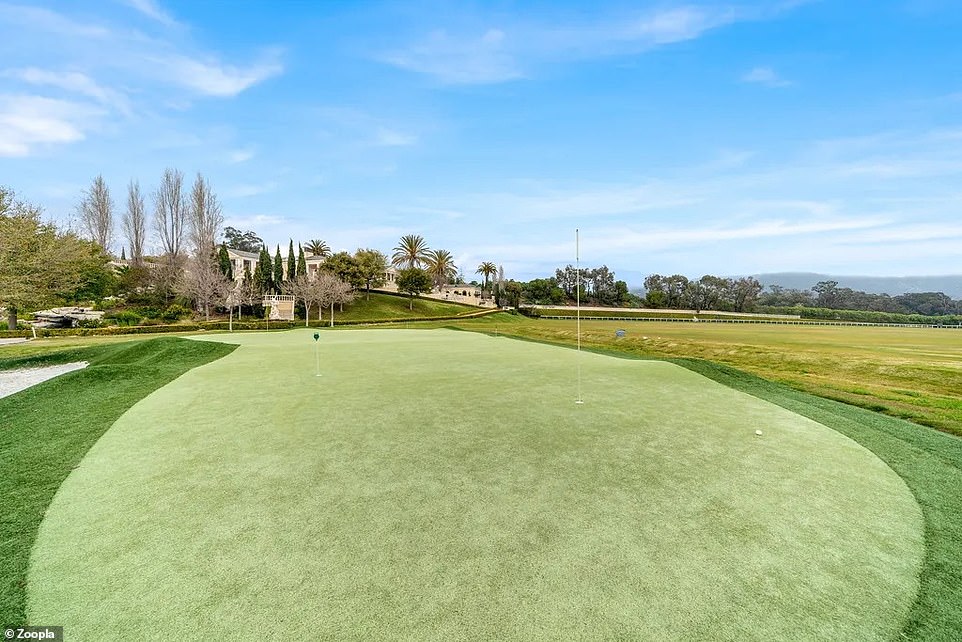 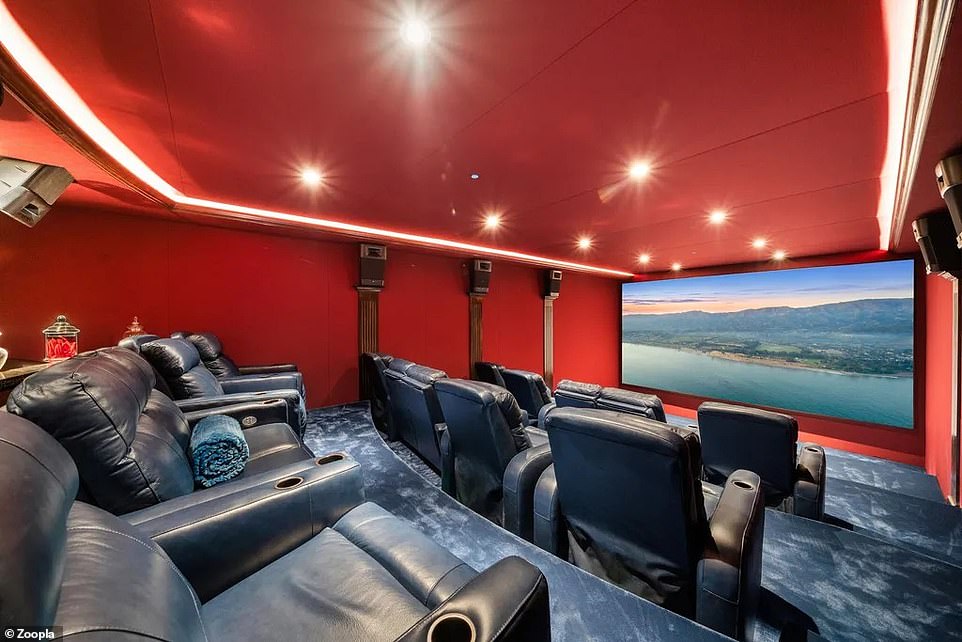 There is a a 20-seat cinema room that has a blue floor and chairs, which contrasts with the bright red walls and ceiling 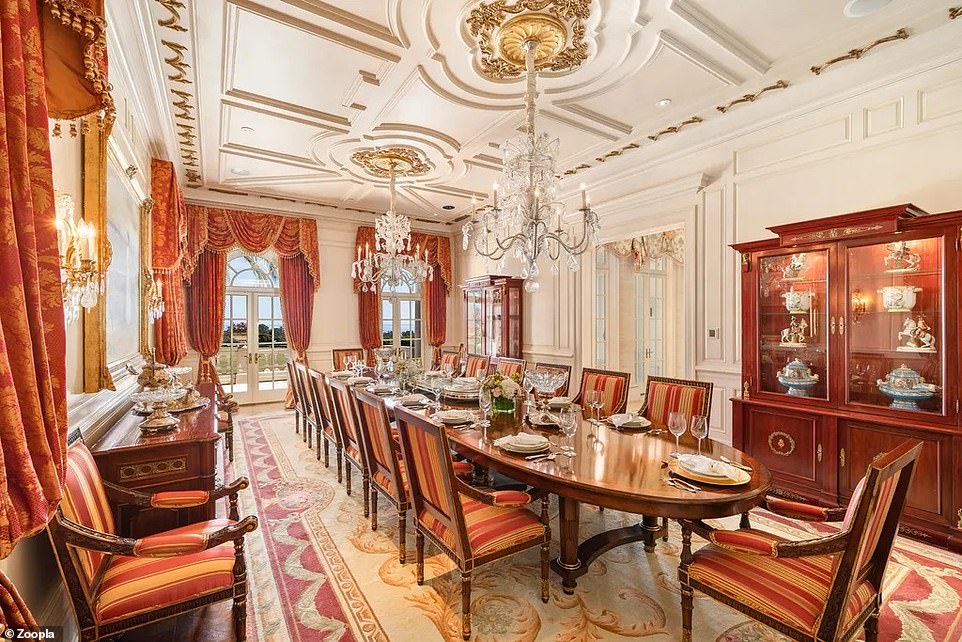 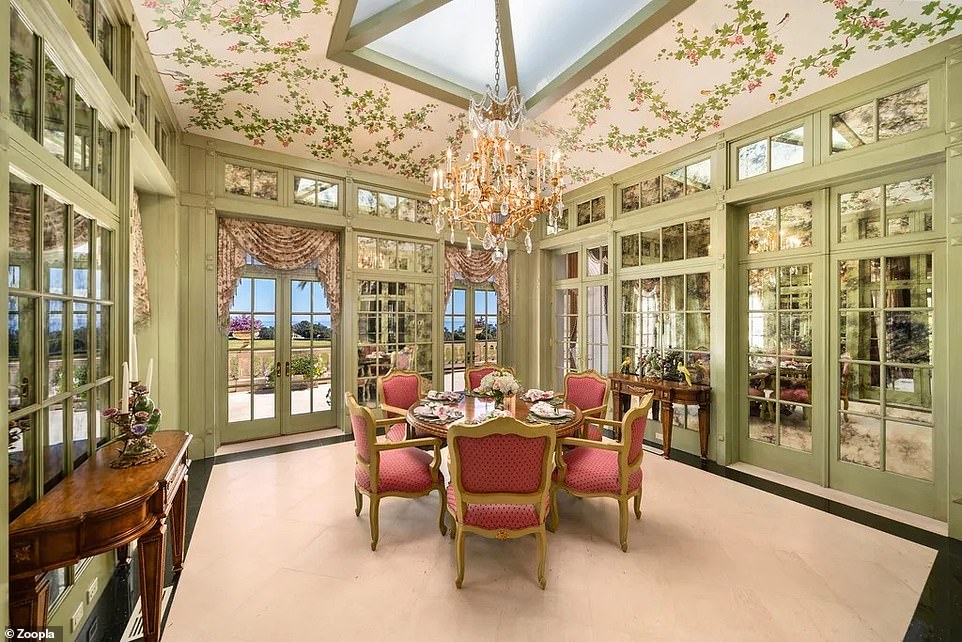 Harry and Meghan moved to Montecito in Santa Barbara as part of their new life in the US. It is a neighbourhood with a reputation for secluded hillside estates and privacy.

The couple share their $14million Montecito mansion with their two children Archie and Lilibet.

In an interview published earlier this summer in The Cut, the Duchess of Sussex shared how her home in Southern California makes her ‘feel free’ and is ‘calm and healing’. 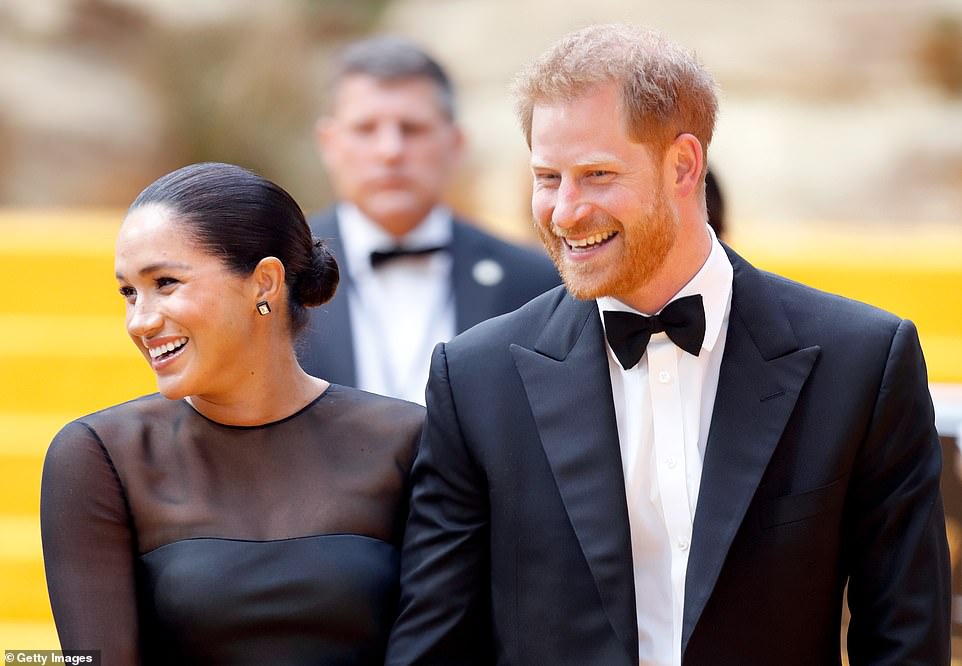 Nearby: You could get the chance to live a short drive away from Harry and Meghan 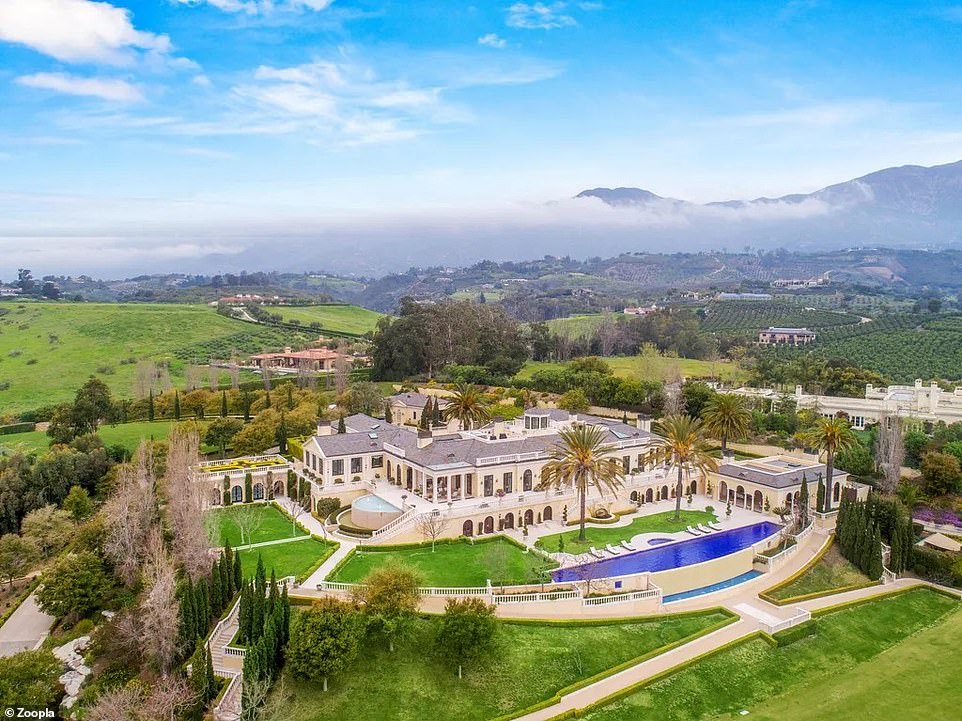 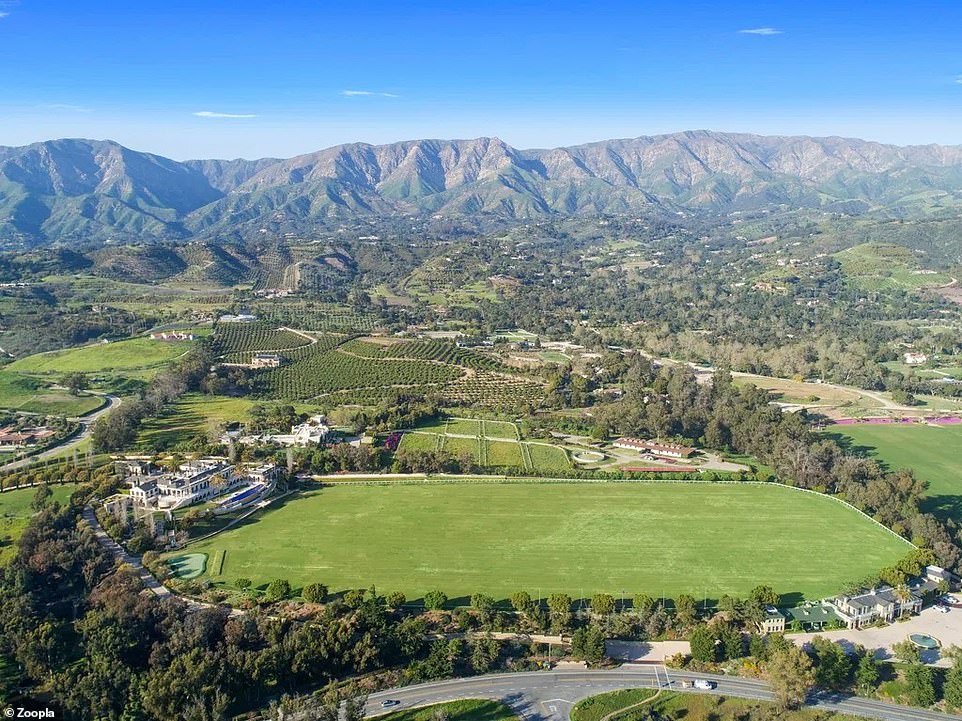 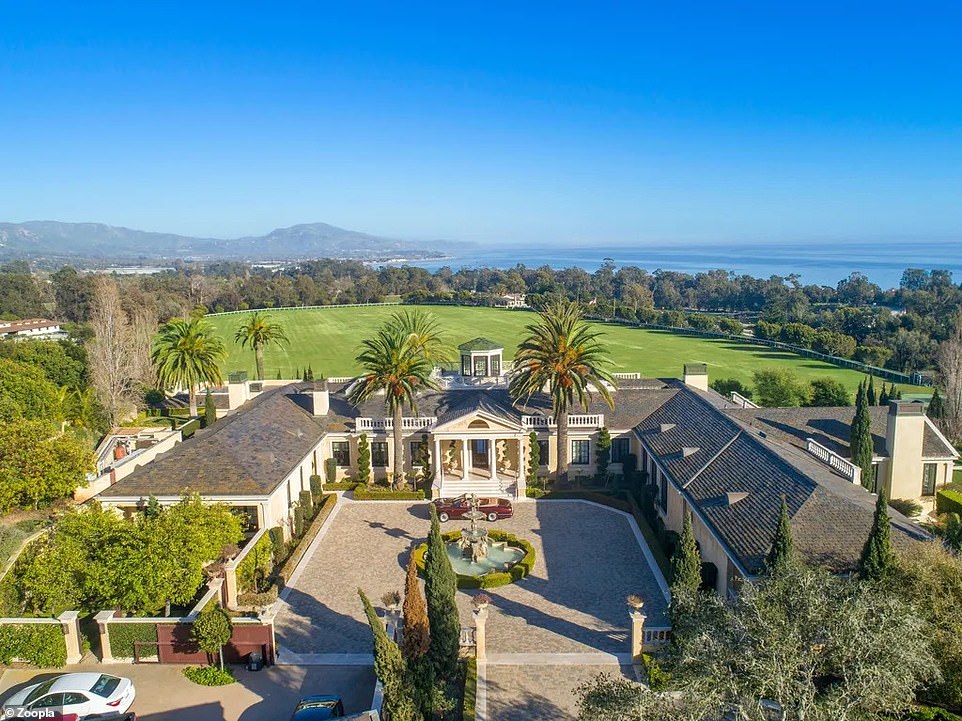 The house for sale was built in 2005, and has more bathrooms than it does bedrooms – a total of 14 and 11 respectively 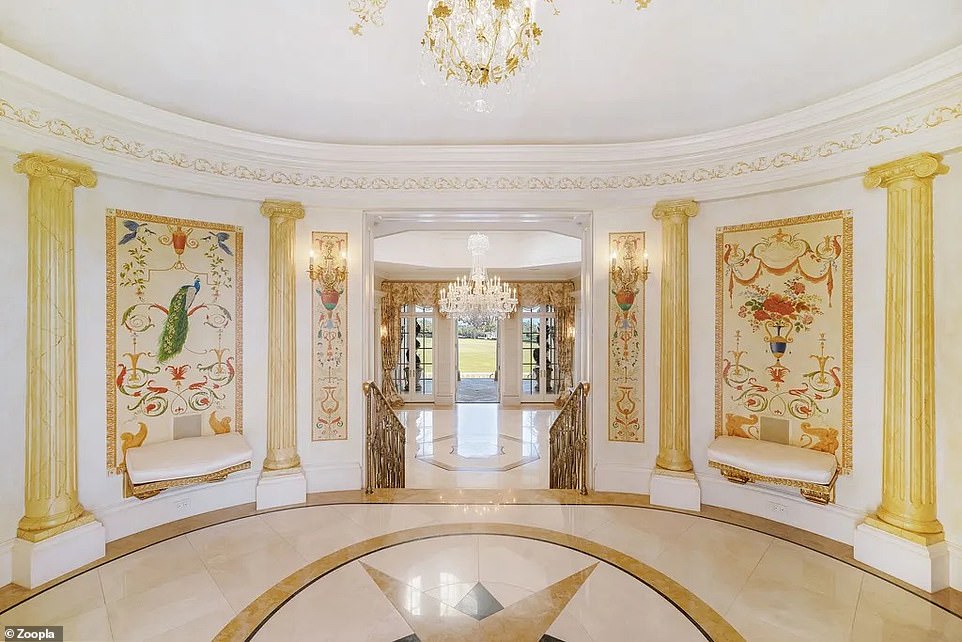 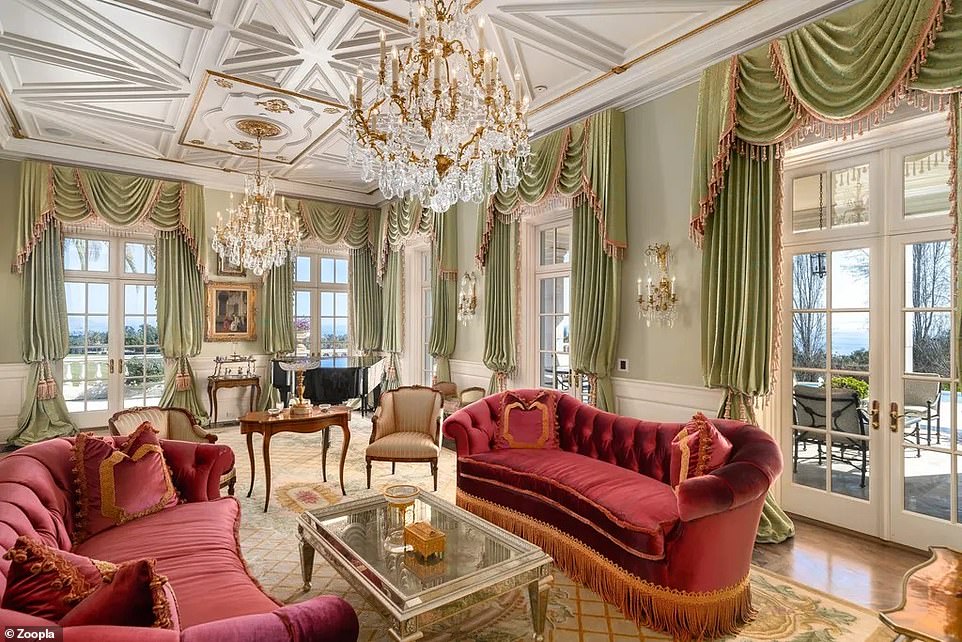 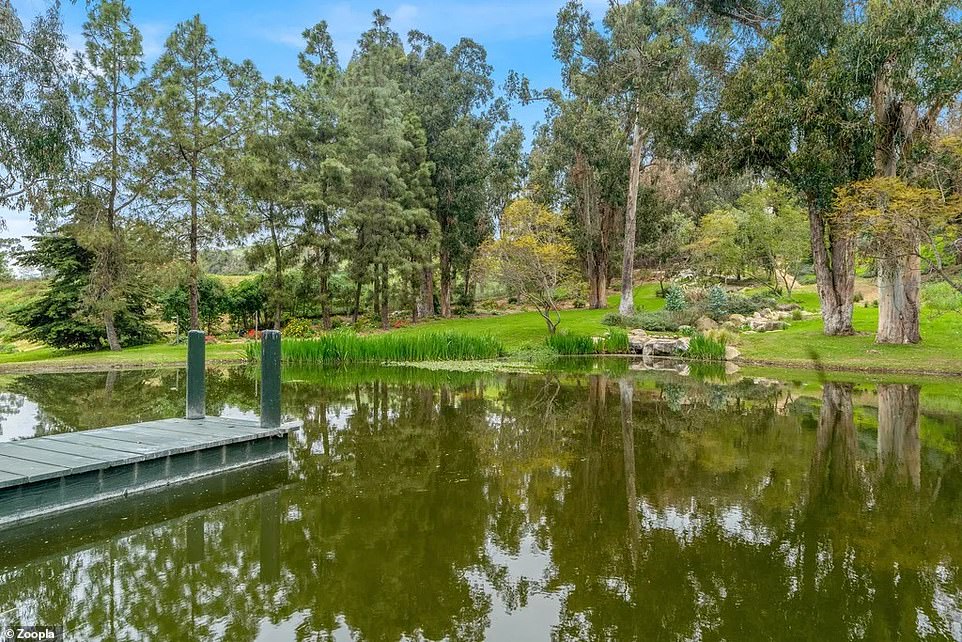 Outside in the expansive grounds, there is a duck pond and a butterfly habitat as well as a Japanese garden 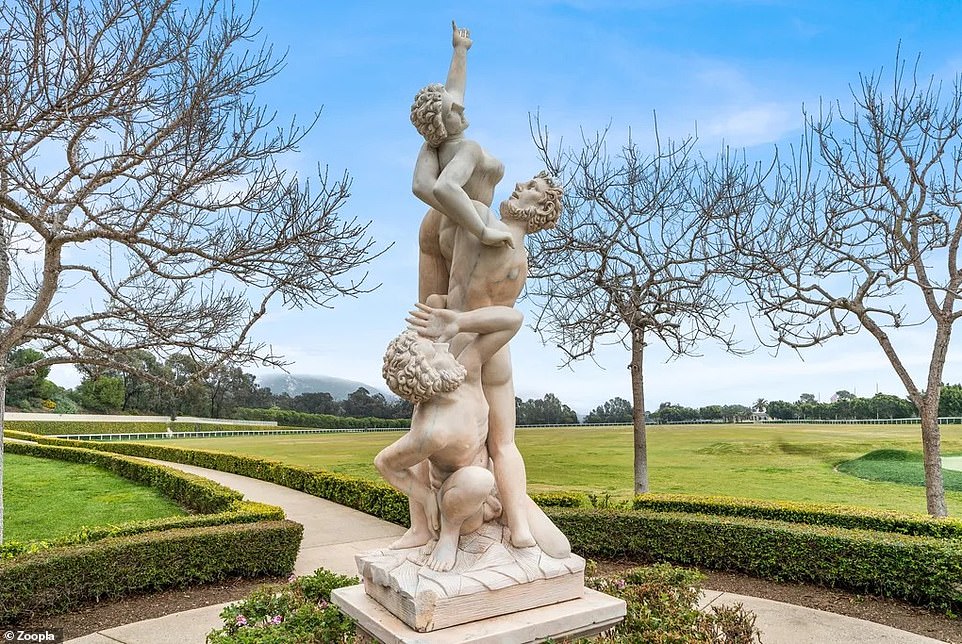 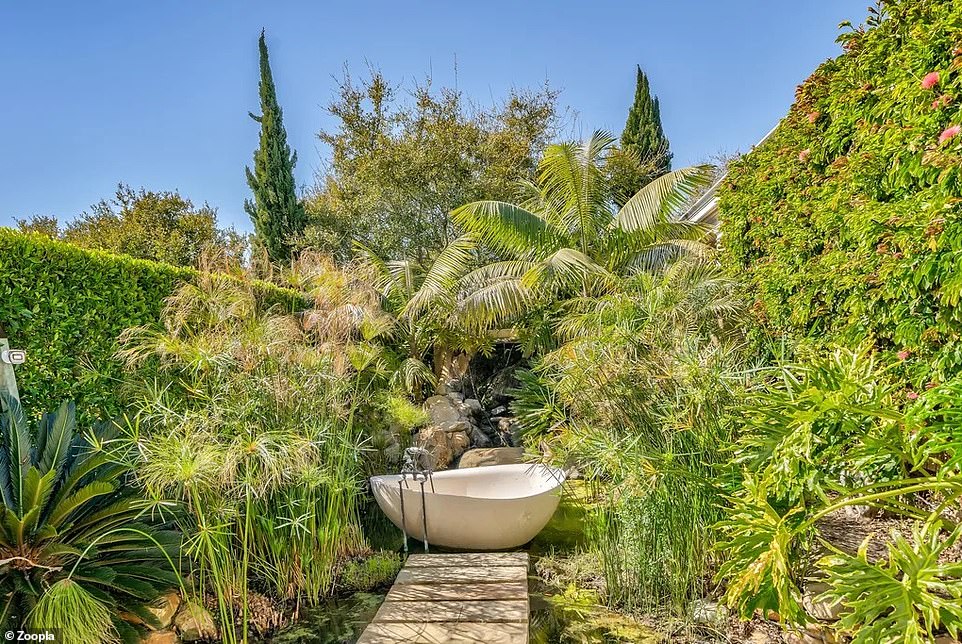 Bella Vista Polo Ranch is just down the road in California’s Summerland and is for sale for £44,865,000.

Daniel Copley, of Zoopla, said: ‘Located near sunny Montecito, the buyer of this palatial home will not only be neighbours with some famous local residents – but will also be located a stone’s throw from some of California’s most beautiful hiking trails and beaches – as well as sought-after and bustling downtown Santa Barbara.’ 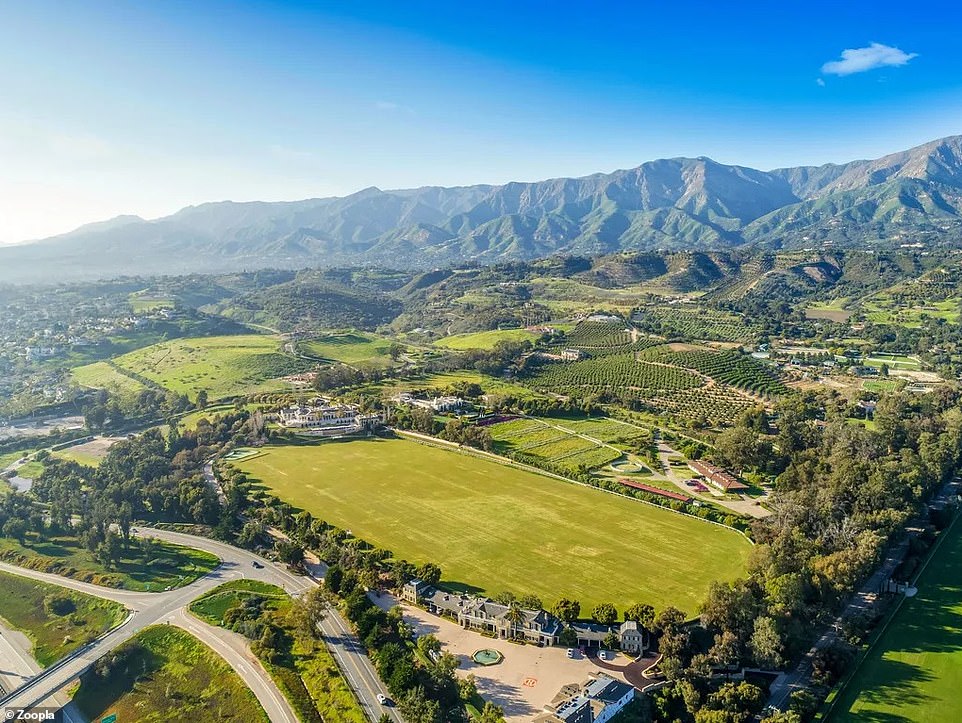 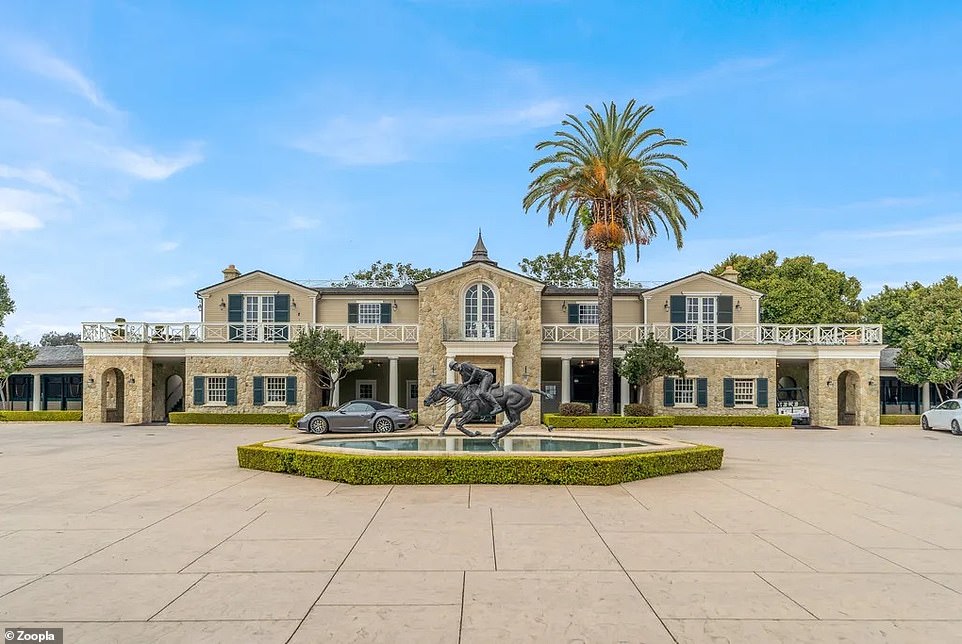 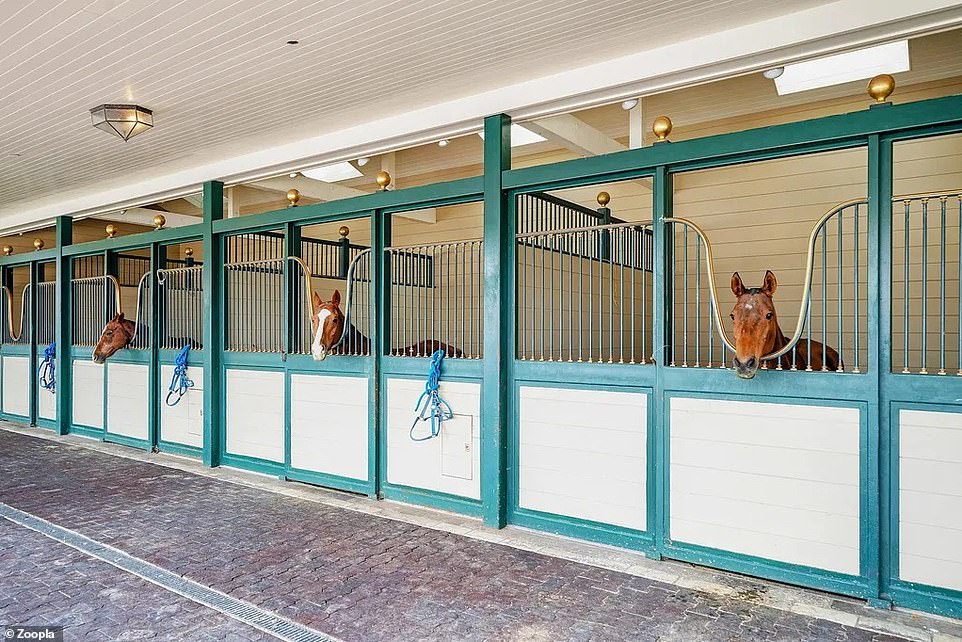 There is a a 17-still horse stable with full amenities for equestrian lovers, who can also enjoy the polo field in the grounds

The Mediterranean-style mansion is accessed via a main gate and a sweeping driveway that leads to a majestic stone fountain.

It was built in 2005, with eleven bedrooms and 14 bathrooms – and is surrounded by acres of manicured gardens.

The main house boasts a 5,000 bottle wine cellar and tasting room, a 20-seat cinema room, a gym and a ballroom that can accommodate 200 guests. It has six bedrooms and eight bathrooms.

There is also a rooftop terrace, a separate guest wing, a free-standing guest house and a pool house.

For those wishing to make the most of the California climate, the grounds have a 128-foot swimming pool, a polo field with state of the art irrigation and a 17-still horse stable with full amenities.

The Sussex’s property in California’s Montecito 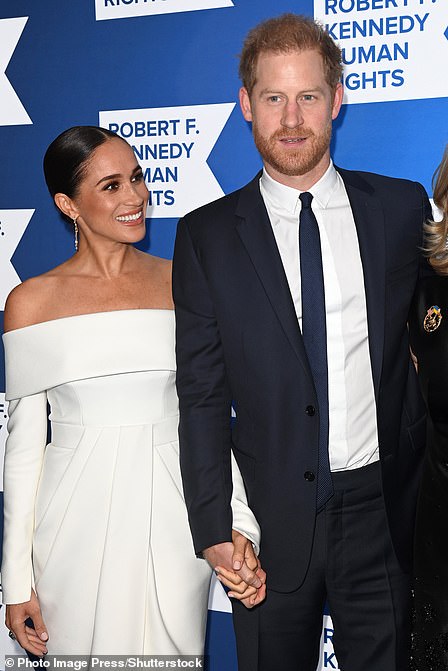 Prince Harry and Meghan Markle have been living in the Montecito

Prince Harry and Meghan Markle bought their California mansion from a Russian businessman with a $9.5million mortgage after the price was knocked down by more than $10million, DailyMail.com can reveal.

The couple bought the sprawling nine-bedroom and 16-bathroom mansion in upscale Montecito for $14.65million, making them neighbors with celebs Oprah Winfrey and Ellen DeGeneres.

The seller is thought to be Russian tycoon Sergey Grishin who bought the ‘palatial’ mansion for more than $25million in 2009.

He had tried to sell the home for up to $34million before eventually accepting a loss.

It included a library, office, spa with a separate dry and wet sauna, a gym with a stripper pole, game room, arcade, theater, wine cellar and five-car garage. 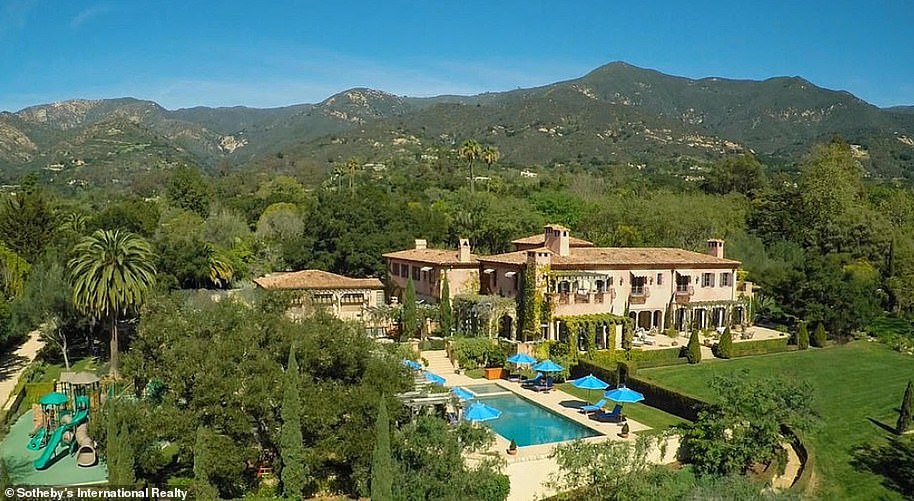