The comedian was born in Colwyn Bay, North Wales, in 1942, moving to Claygate, Surrey, at the age of five.

At Oxford University he became involved in the theatre scene and met fellow Python-to-be Michael Palin, with whom he went on to write TV series Ripping Yarns.

The pair wrote and performed revues for the university’s theatre club.

Later, Jones worked on TV shows like The Frost Report, Do Not Adjust Your Set, Broaden Your Mind and The Complete And Utter History of Britain.

TV history was created after Jones sat down at a tandoori restaurant in north London, in 1969, with Palin, Graham Chapman, John Cleese, Eric Idle and US animator Terry Gilliam to discuss working together on a new BBC comedy.

They wanted to move away from the punchlines and structure of traditional sketch comedy.

Irreverent TV series Monty Python’s Flying Circus was born, making its debut late on a Sunday night on BBC One on October 5, 1969, just before the weather bulletin.

Some 45 episodes of the show, with its surreal, stream-of-consciousness style, aired until 1974, and it snapped up Bafta awards and even led to a German spin-off.

Jones often appeared in drag, sometimes as a ‘haggard housewife,’ or nude, while his other characters included Arthur ‘Two Sheds’ Jackson, Cardinal Biggles of the Spanish Inquisition and Mr Creosote, the monstrously obese restaurant patron.

He made his directorial debut, alongside Gilliam, with Monty Python And The Holy Grail in 1975.

Jones later directed Life Of Brian (1979), about a hapless man mistaken for Jesus.

The film was attacked as blasphemous but has since been voted the funniest of all time.

Jones also went on to direct The Meaning Of Life (1983), the Pythons’ last film together.

It featured loosely linked sketches and the unforgettable song, Every Sperm Is Sacred.

Less than a year after the Pythons called time in 1983, Jim Henson, the puppeteer creator of the Muppets, was in talks with Jones to pen the script for his new fantasy film.

Bowie was eventually cast as Jareth the Goblin King in the adventure fantasy film Labyrinth, while Jones was brought in to pen the words. 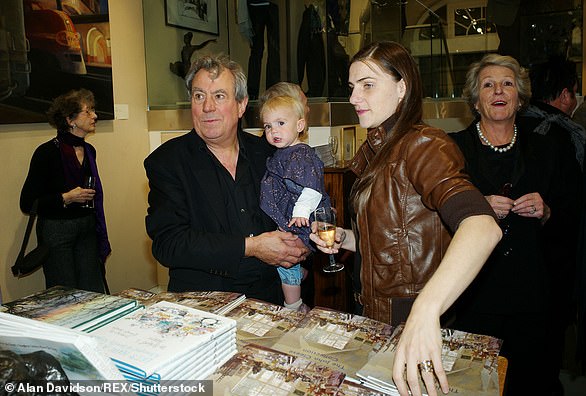 But, by the time the feature was released in 1986, the script had gone through several rewrites and much of Jones’ work had been removed.

He also went behind the camera for Erik The Viking (1989), based on his own children’s book.

His other credits include The Wind In The Willows (1996), with performances from Idle, Palin, and Cleese.

He further explored his surrealist comedy in 2015’s Absolutely Anything, an absurdist tale about a downtrodden schoolteacher given the chance to do anything he wants by aliens.

Despite a stellar cast of Simon Pegg, Kate Beckinsale and Robin Williams, the film was a critical failure.

Aside from a cameo in Gilliam’s Jabberwocky in 1977 and a memorable turn as a drunken vicar in The Young Ones, Jones rarely acted outside of his own projects.

And between 2009 and 2011 he narrated the CBBC programme The Legend Of Dick And Dom, which starred the well-loved children’s presenting duo as two young princes on a quest.

In 2014, Jones took part in a reunion of remaining Monty Python members – Graham Chapman died of cancer in 1989.

The live stage show, which featured an extended cast of dancers, a full orchestra and special effects, delighted thousands of fans.

But in 2016 it was announced that Jones had been diagnosed with dementia.

He suffered from primary progressive aphasia, which affects the ability to communicate.