Monty Python star and Alzheimer’s sufferer Terry Jones united with other dementia patients as he joined the 3,500 people taking part in the London Memory Walk earlier this week.

Terry, 75, who was diagnosed with a rare form of the condition, known as primary progressive aphasia, almost a year ago, is now unable to speak revealed his family but enjoys walking for up to several hours a day.

Long-term friend and fellow Monty Python star Michael Palin recently urged his Facebook followers to sponsor Terry’s 5k jaunt, writing, ‘Terry is an intrepid walker, and continues to leave me breathless after our walks on Hampstead Heath, so I don’t think he’ll have much trouble’.

The Life of Brian’s ex-wife Alison Telfer, who supported Terry across the finish line with their daughter Sally, said: ‘Terry can’t speak because he is living with a rare form of dementia and it is just so awful because he can’t do all the things that he used to do.

‘But he still enjoys going out for long hikes and so we took part in our local Memory Walk because we wanted to support him continue to do things he loves and because it was for a cause close to our hearts.

Sally added: ‘When he got home, he wanted to go (and went) for his normal post-lunch walk on Hampstead heath for another 1.5 hours.’

Terry’s second wife Anna Soderstrom, 33, who he left Alison for after 42 years of marriage, was not at the event.

Monty Python legend and Alzheimer’s patient Terry Jones united with other dementia sufferers as he joined the 3,500 people taking part in the London Memory Walk earlier this week 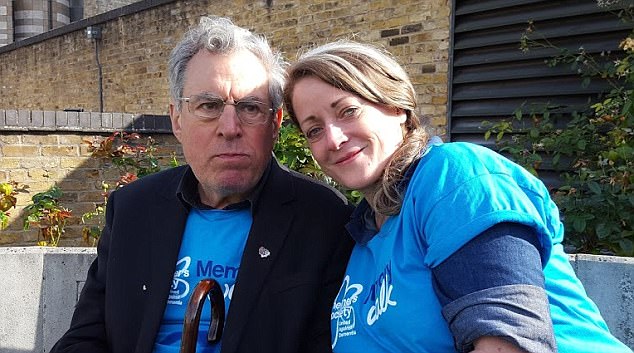 Terry was diagnosed with a rare form of the condition, known as primary progressive aphasia (pictured with daughter Sally) almost a year ago, and has gradually lost his ability to speak 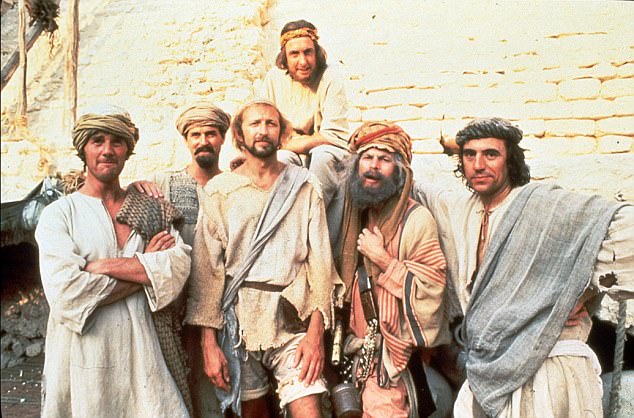 Fellow Monty Python star Michael Palin (far left) urged his Facebook followers to sponsor Terry (far right). The pair have been friends since working on The Life of Brain (pictured) together

THE RISE OF MONTY PYTHON

Terry Jones is a writer, actor and director best known for being a member of the surreal comedy troupe Monty Python.

Monty Python, which also starred John Cleese and Michael Palin, created the films Holy Grail, The Meaning of Life and Life of Brian.

After splitting in 1974, the group reformed in 2013 for nine performances of the show Monty Python Live (Mostly).

Terry Jones is known for his colourful love life after leaving his wife of 42 years Alison to marry Swedish student Anna Soderstrom, now 33.

Can only mutter a few words

Terry first showed signs of the disease in 2014 when he required a teleprompter while performing the Monty Python live (mostly) tour.

In September 2015, he was diagnosed with dementia and gradually lost the ability to talk, to the point where he is now only able to mutter a few words at a time.

At last year’s Bafta awards where Terry was presented with an accolade for outstanding contribution to television and film, his son Billy gave a speech on behalf of his father, who was only able to tell the audience to ‘quieten down’.

A choked-up Billy said: ‘The struggles we’re having at the moment, it’s a bit hard.’

Sally added: ‘For someone who lived by words and discussions this [is] tragic,’ The Guardian reported. 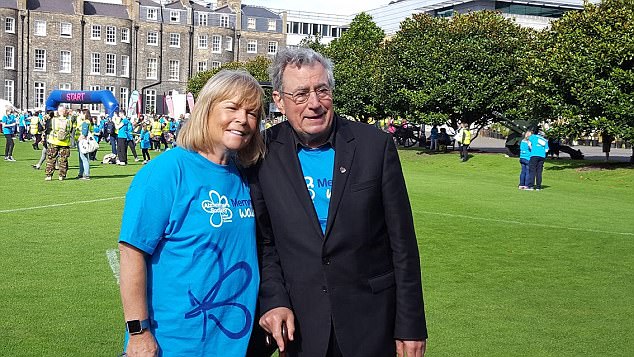 Terry (pictured with Birds of a Feather actress Linda Robson, who opened the walk) first showed signs of the disease when he could not remember his lines and needed a prompter 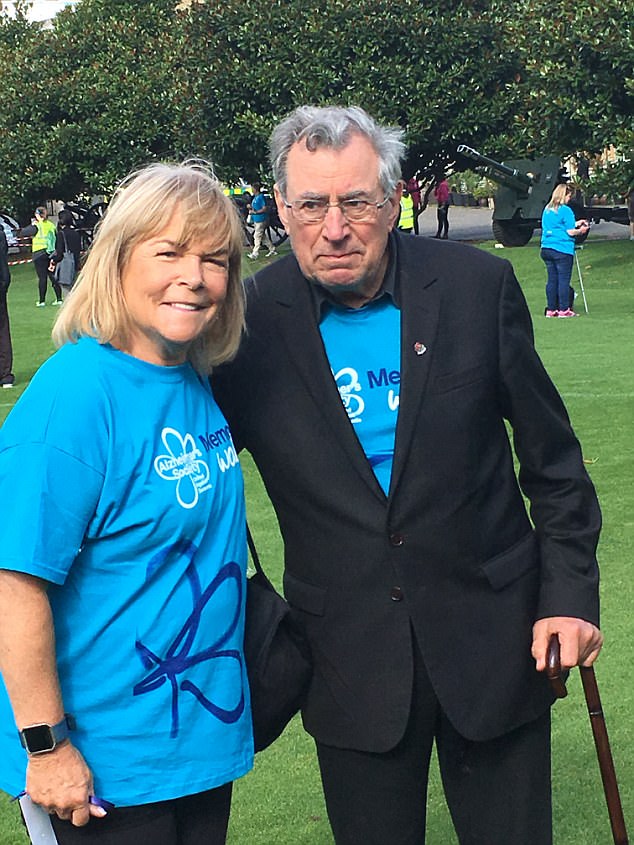 In September 2015, he was diagnosed with dementia and gradually lost the ability to talk, to the point where he is now only able to mutter a few words at a time, but can still walk 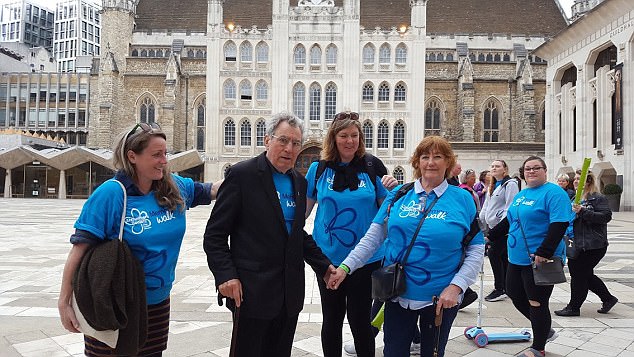 Terry is said to have accepted his condition and even used to tell strangers he had dementia (pictured with his Sally, left, and holding hands with his ex-partner Alison Telfer) 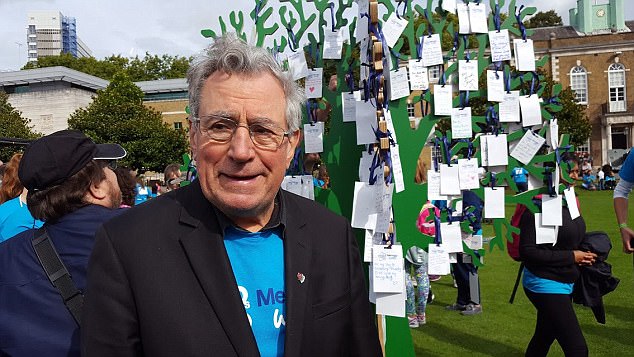 WHAT IS PRIMARY PROGRESSIVE APHASIA?

Primary progressive aphasia is a type of frontotemporal dementia that is much less common than Alzheimer’s disease or vascular dementia.

Yet, in the 42,000 people who develop dementia before the age of 65, primary progressive aphasia is a significant cause.

The word ‘frontotemporal’ refers to the parts of the brain that are damaged in this type of dementia.

The frontal lobes, which are found behind the forehead, are important for behaviour and problem solving. The temporal lobes, on either side of the brain, are involved in language, understanding the meaning of words, and knowing the names of objects.

In primary progressive aphasia, the initial symptoms are problems with language and communication, as the temporal lobes are most affected by the disease.

Symptoms differ between people, but can include difficulty understanding what words mean, severe trouble finding the right word, and having slow, hesitant speech.

Although Terry’s family struggled to cope with his condition, Michael Palin commented on how accepting he appears to be of his diagnosis, with Terry even bringing it up when he was first introduced to people.

And, despite his loss of speech, Terry still leaves Michael in his shadow when storming ahead of him during their walks on Hampstead Heath.

Michael said: ‘[Dementia] may cause loss of inhibition, but Terry was never very inhibited in the first place.

‘He still enjoys his beer, his wine, his walks, his films and a good joke.’

Terry’s daughter Sally says the condition only appears to get her father down when he is unable to give directions to taxi drivers or express his frustration at being stuck in traffic.

The condition is also associated with a lack of control around food, with Sally remembering a time when Terry ate his birthday cake before blowing out the candles.

He is also unable to express how pleased he is to see people, yet Sally insists he still remembers his old friends.

Jeremy Hughes, chief executive of Alzheimer’s Society, said: ‘I am so glad that Terry joined Alzheimer’s Society’s Memory Walk. Not only is he show business royalty, but his presence gave so many people who were taking part a real lift as he showed that he is determined to battle dementia with everything he’s got.

‘Someone develops dementia in the UK every three minutes. Every pound raised at Memory Walk will help Alzheimer’s Society provide information and support, improve care, fund research and create lasting change for people affected by dementia. Walk with us at Memory Walk and dementia won’t win.’

This autumn there are 34 Memory Walks taking place nationwide, including the first night walks in London, Liverpool and Cardiff in mid-October.