PYEONGCHANG, South Korea (AP) – South Korean President Moon Jae-in said Saturday that he hopes his efforts to engage rival North Korea at the Olympics will also lead to better ties between the North and its other major rival, Washington, as well as help set up talks on ridding the North of its nuclear bombs.

But Moon wouldn’t answer a question from The Associated Press about what needs to happen before he’ll take North Korean dictator Kim Jong Un up on his invitation for a summit. He earlier said “let’s not get too far ahead” on a summit, according to his office.

Moon has yet to accept the North Korean offer, which was delivered Feb. 10 by Kim’s younger sister, Kim Yo Jong. He’s only said that the Koreas should “create an environment” for talks.

There’s a reason for his caution: the United States.

Moon likely wants his talks with the North to be accompanied with warming ties between Pyongyang and Washington so there’s less chance of aliening the South’s most crucial ally, which keeps 28,500 troops in South Korea to deter an attack by the North.

Some conservatives worry that North Korea’s friendly overtures to Seoul are meant to push Washington farther away from its southern rival. This, the North may hope, will ruin U.S. President Donald Trump’s policy of “maximum pressure,” which is focused on slapping more isolating sanctions on the most sanctioned country on earth.

Moon said Saturday that a women’s hockey team of both North and South Koreans, a squad of North Korean cheerleaders (229 of them, all women) and an opening ceremony that saw both Koreas march together under a flag that showed a single Korea have moved Koreans and people around the world.

He also noted that “a consensus is starting to build that there’s also a need for talks between the United States and North Korea.”

Despite Moon’s optimistic comments Saturday, there is deep skepticism about whether the good feelings on the Korean Peninsula will last.

Because of the Olympics, the United States and South Korea postponed March war games that the allies stage annually, but those exercises will probably resume. Pyongyang reacts with extreme hostility to the drills, which it claims are invasion preparation.

The U.S. stance could be seen during the opening ceremonies, when North and South Korean athletes marched into the Olympic stadium under a “unification” flag. Moon and Kim Jong Un’s sister rose, but U.S. Vice President Mike Pence stayed in his seat.

Foster Klug, South Korea bureau chief for The Associated Press, has covered the Koreas since 2005. Follow him on Twitter at @APKlug. 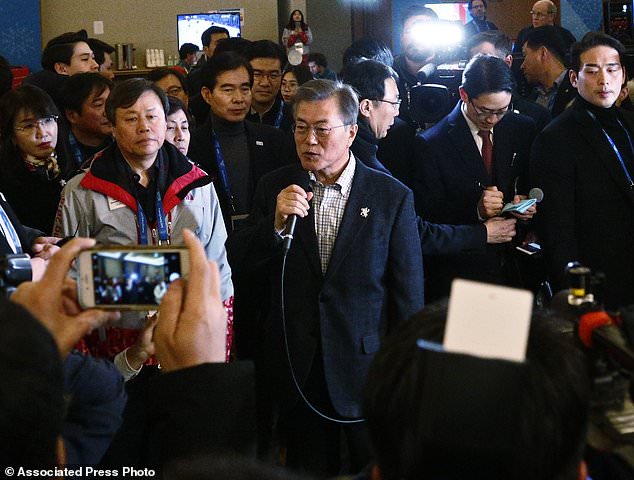 South Korean President Moon Jae-in speaks to journalists during a visit to the Main Press Center at the 2018 Winter Olympics in Pyeongchang, South Korea, on Saturday, Feb. 17, 2018, (AP Photo/Peter Morgan)