Scientists have found a cluster of three salty liquid water lakes on Mars, each about six miles across, below the planet’s south polar ice cap.

An international team examined radar data from MARSIS, a scientific instrument on board the European Space Agency’s Mars Express spacecraft.

The technique uses bursts of radio waves to image buried geological structures – in a similar fashion to ‘seismic prospecting’, which helps predict earthquakes.

They found the briny lakes – which have potential to sustain microbial life in extreme conditions – at Ultimi Scopuli, a region near the Red Planet’s south pole.

Microbial life in the lakes could include extremophiles, which can stand intense heat, highly acidic environments, extreme pressure and extreme cold.

The new discovery is the first ‘alien’ water found on the Red Planet since 2018, when the first ever lake was discovered beneath the Martian south polar ice cap.

The 2018 discovery was the first proof of liquid water on Mars that still exists today – an environment scientists say is ideal for the growth of microbial life.

Scientists say the new lakes in the same region are an indicator of ‘the presence of other wet areas nearby’.

The analysis presented in this work was performed on the data acquired in 134 radar profiles from Ultimi Scopuli. This image shows topographic map and location of MARSIS profiles collected in the region, with the new lakes indicated by diagonal red lines (top). The black star in the middle of the red cross indicates the centre of the area detected by Orosei et al in 2018

‘The existence of a single sub-glacial lake could be attributed to exceptional conditions such as the presence of a volcano under the ice sheet,’ said Roberto Orosei, principal investigator of the MARSIS experiment.

‘[But] the discovery of an entire system of lakes implies that their formation process is relatively simple and common, and that these lakes have probably existed for much of Mars’ history.

‘For this reason, they could still retain traces of any life forms that could have evolved when Mars had a dense atmosphere, a milder climate and the presence of liquid water on the surface, similar to the early Earth.’

The three newly detected water bodies appear to be ‘discrete and not physically linked’, according to co author Dr Angelo Pio Rossi at Jacobs University in Bremen, Germany.

‘We could detect three bodies of water which are located around the main one already detected in 2018 paper, and are separated by strips of dry terrain,’ he told MailOnline.

The new water bodies were found using data from the European Space Agency’s Mars Express probe, which has orbited the Red Planet since 2003 and began to collect data in the summer of 2005.

The device sends radar signals that penetrate the ice at the planet’s surface, and measures how the radio waves spread and reflect back to the probe.

The methodology is commonly used in radar sounder investigations of sub-glacial lakes in Antarctica, Canada and Greenland. 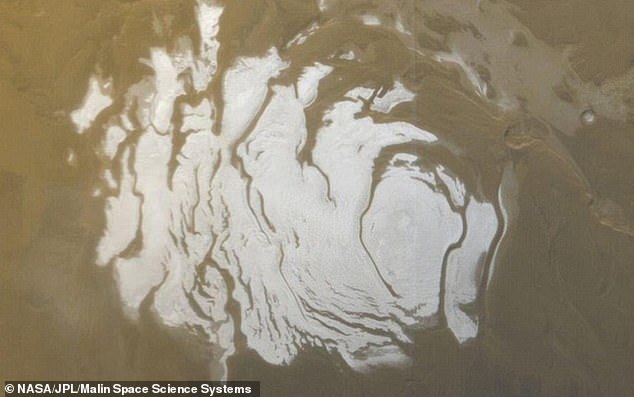 The 2018 discovery was the first proof of a liquid water on Mars that still exists today – an environment scientists say is ideal for the growth of microbial life. The lake is believed to sit below this patch of ice at the south pole

The new lakes are also about 0.9 miles (1.5km) in depth from the surface, which is not too different vertically compared to the depth of the 2018 lake.

‘But the actual depth, or thickness, of the water bodies cannot be measured with MARSIS sounding radar data (or any other radar) since the radar could not penetrate further,’ Dr Rossi told MailOnline.

‘What is measured is just the depth of the top of these liquid water bodies.’

Detection of sub-glacial liquid water in Ultimi Scopuli in 2018 reignited hopes of extra-terrestrial life in liquid water at the Martian polar regions.

MARSIS had detected an area of strong reflectivity beneath the South Polar Layered Deposits – a thick polar cap formed by layers of ice and dust.

This originally discovered lake is discovered to be about the size of lake Windermere, spanning 12 miles (20km) and buried nearly a mile (1.5km) underground. 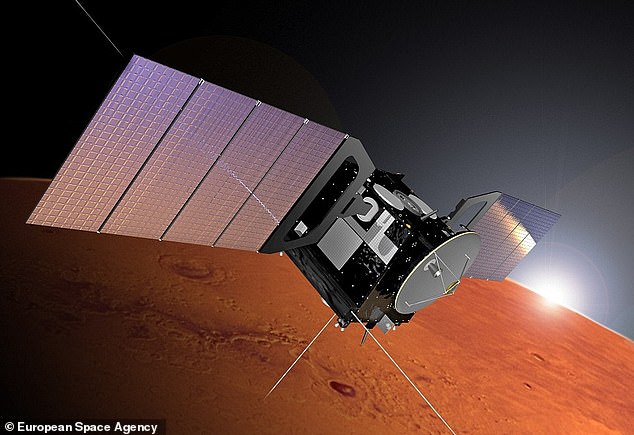 The announcement was followed by efforts to confirm the initial finding and to further understand the conditions that would allow liquid water to persist under the Martian south polar ice cap.

Now, old and new MARSIS data reveals the existence of this ‘patchwork’ of three lakes, although it’s not known if they are connected with the lake found in 2018.

‘Not only did we confirm the position, extent and strength of the reflector from our 2018 study but we found three new bright areas,’ said co-lead author Elena Pettinelli at Roma Tre University.

‘The main lake is surrounded by smaller bodies of liquid water, but because of the technical characteristics of the radar, and of its distance from the Martian surface, we cannot conclusively determine whether they are interconnected.’

As it stands, technologies do not allow for drills to penetrate deep enough to reach the liquid water in the lake, however.

Briny solutions such as the water on the Martian south pole remain in a liquid state on Earth at temperatures much lower than the freezing point of water.

Because of this, brines have been proposed as the most plausible form of liquid water on Mars, which has an average global temperature of around -108°F (-60°C). 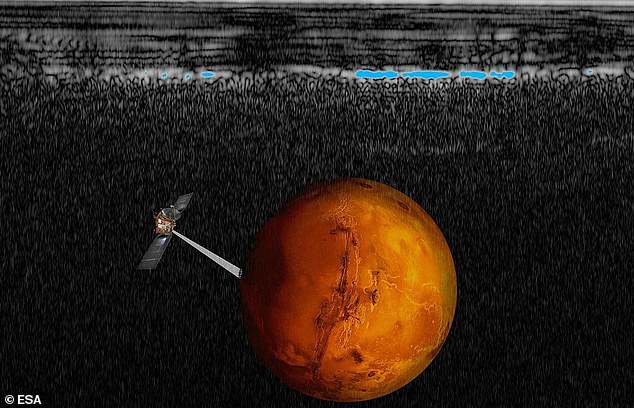 This artist’s impression shows the Mars Express probe investigating the southern hemisphere of Mars over a radar cross section of the craft’s readings. The blue spots are areas of high reflectivity – thought to be liquid water

‘These experiments have demonstrated that brines can persist for geologically significant periods of time even at the temperatures typical of the Martian polar regions considerably below the freezing temperature of pure water,’ said study author Graziella Caprarelli at University of Southern Queensland.

‘Therefore we think that any process of formation and persistence of sub-ice water beneath the ice polar caps requires the liquid to have high salinity.’

‘Future missions to Mars should target this region to acquire experimental data in relation to the basal hydrologic system, its chemistry and traces of astrobiological activity.’

Finding more reservoirs of sub-glacial water and determining their composition and astrobiological potential is now the next stage of the research.