Councils across the country are planning to reduce bin collections to just one a month in a move affecting more than 2.5million people, sparking health fears.

The scheme is being implemented in a bid to force households to recycle more – under European Union targets Britain must recycle at least half of all household waste by 2020. The figure is currently at 43 per cent.

But the move, which has seen 18 councils moving or planning to move to three-weekly rubbish collections, has sparked outrage in the one million households which will be affected. Another three councils are testing out monthly collections.

In January furious residents demanded ministers intervene to halt the spread of monthly collections after a pilot scheme made their lives a misery.

The householders in Conwy, north Wales, said they had been forced to burn rubbish in their gardens or beg older neighbours to take their waste.

Lib Dem MP John Pugh said at the time: ‘How can families be expected to burn rotting food? In what world should this plan be rolled out nationally? It’s bonkers.’

He added: ‘The Department for Communities and Local Government needs to step in, today, and ensure this scheme is not introduced in streets across the country.’ 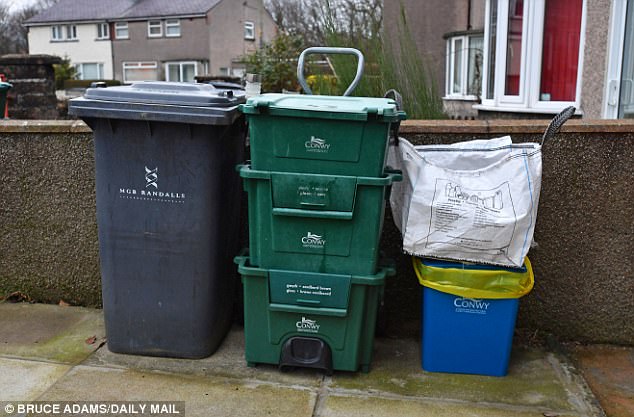 But several more across the UK have admitted they could follow suit. At least another 20 local authorities, including several in Greater Manchester, North Devon and Leicestershire, have already imposed or are considering three-weekly bin collections – much to the disgust of residents.

Conservative MP Andrew Brigden told the Daily Telegraph: ‘Anything less than fortnightly poses a health risk as it will attract pests and create an undesirable smell.

‘People need to lobby their council and tell them they do not want this.’

Meanwhile, it emerged last week that Government cash could be used to fund the installation of ‘smart bins’ which automatically send out text messages asking to be emptied when they are full.

The hi-tech rubbish containers, designed to alert refuse collectors to the need for action before they overflow, are among proposals expected to feature in bids for £500,000 of funding on offer for innovative approaches to tackle litter.

Other potential recipients of cash from the Litter Innovation Fund could include behavioural research to establish where bins and recycling stations should be positioned for maximum use or digital solutions like apps, said the Department for Environment, Food and Rural Affairs (Defra).

She invited bids for grants of up to £10,000 for creative solutions to the problem.

Successful projects could be rolled out across the country if they prove effective.

‘Tackling the litter that blights streets across our country is an important part of our drive to be the first generation to leave our environment in a better state than we found it,’ said Ms Coffey.

‘The Litter Innovation Fund offers a great opportunity for the most creative solutions to littering to receive funding and for us all to learn new ways of how to stop littering happening.’