Yet more secret kitchens lurking in some of our city’s grubbiest corners have been revealed as supplying takeaways for well-known restaurants brought to your door by Deliveroo.

The food courier service has been setting up these prefabricated kitchens for swanky eateries that are located close to their customer base without having to pay the premium for a high street location.

Deliveroo has revolutionised Britain’s takeaway market in four years and the company is thought to be worth as much as £1.1 billion.

And these remote kitchens are part of the company’s plan for further growth.

Deliveroo finds and equips the locations, then rents them out to the restaurants, which employ and train the kitchen staff.

These ‘dark kitchens’ may allow savings to be passed on to consumers for restaurant-quality food delivered from a location that requires less cash to fund it but some customers have been shocked at the unlikely location of the kitchens.

The newly discovered site in east London provides food from 10 shipping container-like boxes which produce food for for restaurants including the Thai chain Busaba Eathai, the US-style MeatLiquor diners, the Franco Manca pizza parlours and Motu, an Indian food specialist set up by the family behind Mayfair’s Michelin-starred Gymkhana,The Guardian reports.

The boxes have no windows and workers said that the kitchens are generally either too cold or too hot.

Deliveroo now operates 11 sites which are home to 66 ‘dark kitchens’ in car parks and industrial estates across London, Leeds, Reading and Hove.

The Daily Mail previously uncovered prefabs cropping up in corners of industrial estates staffed with chefs who cook food to order as outposts for the restaurants sit-down locations. 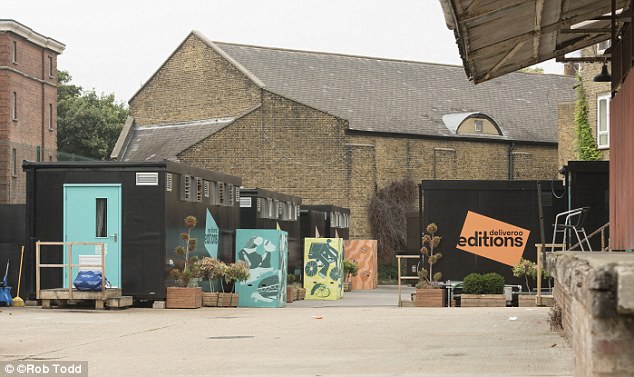 Deliveroo Editions in Valmar Industrial Park,Camberwell. Deliveroo have set-up portacabin kitchens in areas with few good restaurants to produce food for delivery by Deliveroo only 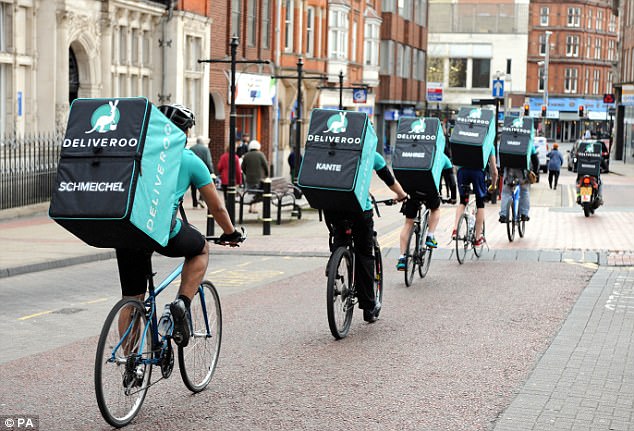 A wheely good service: A team of Deliveroo riders named after Leicester City FC players sets off from Peter Pizzeria in Leicester to deliver freebies to football fans in celebration of the club winning the Barclays Premier League, ahead of the team lifting the trophy this weekend

While Deliveroo customers living close by will receive their food from the actual restaurant kitchen, those further afield will instead be serviced by a satellite kitchen in a car park in the altogether more edgy South London borough of Camberwell, some six miles south of its actual premises.

And Cocotte is by no means alone in choosing these metal containers to act as alternative kitchens.

Other restaurants churning out Deliveroo orders from this rather grim-looking car park include Busaba Eathai, a chain with 14 restaurants in London and St Albans that serves Thai food, and Motu Indian Kitchen, set up by the family behind the Gymkhana restaurant in Mayfair — one of the world’s highest rated Indian restaurants.

Although meals emerging from the car park kitchens are flagged up online as coming from a ‘Deliveroo Editions’ restaurant, how many of its customers actually know what that means?

But this, apparently, is the future for Deliveroo. It is determined to expand into areas that have so far been restricted due to their distance to High Streets.

In a programme being rolled out across the country, it is setting up hubs of multiple kitchens in areas that are currently poorly served by the sorts of restaurants it knows to be popular with its customers.

And these Deliveroo Editions bases — dubbed ‘dark kitchens’ — will, in some cases, be like the one on Valmar Road in Camberwell: little more than metal huts in the car park of an industrial estate. 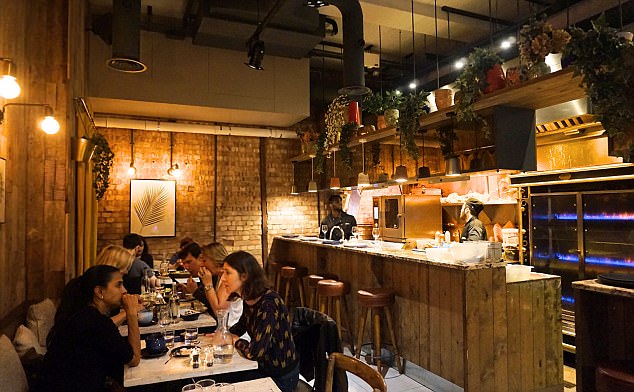 Restaurants will then rent out these spaces to produce food solely for delivery.

Of course, more sales means more cash for Deliveroo. As well as a £2.50 delivery charge, it takes a hefty commission on each meal sold (reported to be as high as 25 per cent).

But there are significant problems with this new model — not least that it seems rather contrary to Deliveroo’s promise to bring your favourite restaurant direct to your front room.

‘We all thought Deliveroo delivered food from restaurants,’ says one campaigner against the South London hub. ‘We didn’t know it was delivered from a metal box at the back of a warehouse.

‘No doubt it must be very profitable — it does not have to build a restaurant, the staff are all disposable and the customers don’t have a clue what is going on.

‘It is like setting up a container at a festival and selling food all day without any of the normal overheads. And what happens to all the restaurants nearby on the High Street — surely they will suffer?’