MORE Labour four-day week chaos: Jeremy Corbyn contradicts John McDonnell and says reduced hours will NOT apply to NHS staff at BBC debate as he comes under fire for plans to hike taxes

Labour’s plans for a four-day week were plunged into fresh confusion tonight as Jeremy Corbyn over-ruled his closest ally to insist that NHS staff would be exempt.

Mr Corbyn’s claim in the BBC leaders’ debate that there were ‘no plans’ to extend its goal of a 32-hour week to medics came despite shadow chancellor John McDonnell insisting that it would apply to health workers.

Mr Corbyn was also taken to task by Boris Johnson over the tax burden on ordinary workers he claims will be increased under Labour.

Pressed about his plans for the health service, Mr Corbyn said he wants to see the working week come down, but added: ‘There is no plan to bring in a four day week in the NHS.’

But it came after Mr McDonnell said in November the proposal would include NHS staff – after shadow health secretary Jonathan Ashworth said it would not, live on television.

Mr Johnson made a dig at Labour’s plans for a four-day week. He said: ‘What I think is totally incomprehensible is to have a system where you try to get more nurses and more doctors into the NHS, but simultaneously allow the whole of the public sector to work a four-day week.’ 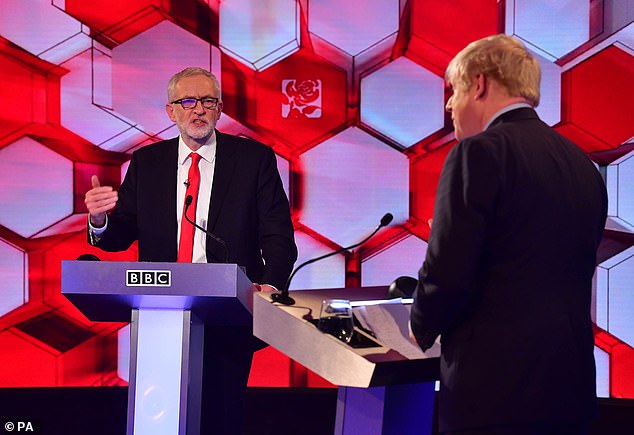 Pressed about his plans for the health service, Mr Corbyn said he wants to see the working week come down, but added: ‘There is no plan to bring in a four day week in the NHS’

‘Within a decade we will reduce average full-time weekly working hours to 32 across the economy, with no loss of pay, funded by productivity increases.’

Last month Mr Ashworth appeared to water down the policy as he said there would be a ‘commission and a review in 10 years’ time looking at’ the viability of a shorter working week.

His remarks put him on a collision course with the shadow chancellor who announced the overhaul of working conditions at Labour’s annual conference in September and said it would be achieved ‘within the next decade’.

Mr McDonnell said at the time: ‘The next Labour government will put in place the changes needed to reduce average full-time hours to 32 a week within the next decade.’

But asked if the NHS would be included in Labour’s plan, Mr Ashworth said: ‘No. It is not happening. There is not a four day week coming in the NHS.’

However, just hours later at a campaign event alongside Mr Ashworth, Mr McDonnell said the four-day week policy ‘will apply to everybody’.

Mr Johnson also used the debate to attack Labour’s plans to increase taxes to pay for investment in pubic services and a wave of nationalisations.

He cited the highly disputed figure of £1.2trillion that Labour plns to spend, saying it woul amount to an additional £2,400 per taxpayer.

He  added:  ‘You hear from Labour sometimes that the burden is only going to fall on the 150 billionaires or the top 5 per cent.

Mr Corbyn hit back, saying: ‘The problem in this country is that we have gone too far down the road of free market economics.

‘We have created too much inequality and if every single bit of our manifesto was carried out tomorrow, we would just about reach the level of public services of France or Germany.’