More of us are venturing outside and feeling happier

More Brits are venturing outside as coronavirus cases continue to plummet and the weather gets better, official data suggested today.

Twenty-one per cent of adults surveyed said they had visited a park or outdoor green space at the start of March. In comparison, the figure was 16 per cent after England’s third national lockdown was implemented in January.

And Britons are now feeling happier than they were at the start of the year, Office for National Statistics experts said.

Wellbeing hit a record low of 6.4 out of 10 in January and February, during the depths of the darkest spell of the second wave. But polling of thousands of adults in the first week of March found it had risen to 6.8.

But half of parents quizzed admitted they were worried about their children returning to school or college.

Boris Johnson has eased lockdown restrictions in England slightly, with schools open again and people from two households allowed to meet for a coffee or picnic. Stay-at-home orders are still in place, however.

Scotland — which is recording more cases of Covid than England — today relaxed restrictions to allow four adults from two households to meet outside.

Wales will make the same step from tomorrow, with First Minister Mark Drakeford set to announce later today that the ‘stay at home’ order will be dropped in favour of a ‘stay local’ message.

The ONS data comes as mountains of evidence shows Britain has turned the tide on the second wave, with infections, deaths and hospitalisations falling for weeks. And a successful vaccine rollout has seen more than 23million Brits receive their first jab. 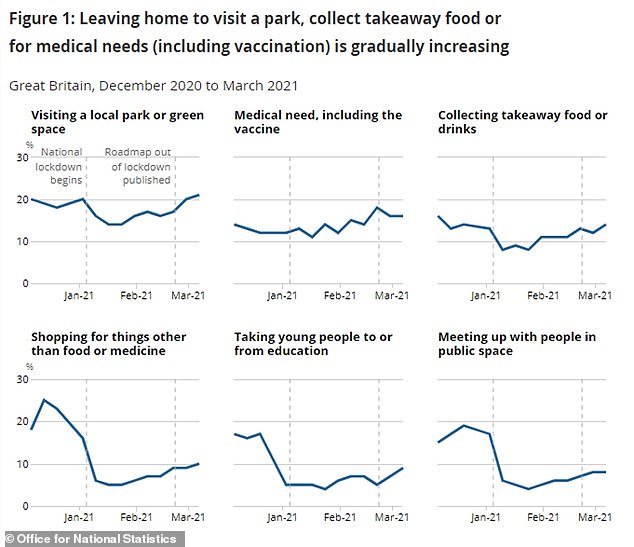 More Britons visited parks or green spaces, collected takeaways and went shopping for non-essential items in the five-days to March 7 than in the darkest days of January, Office for National Statistics data revealed today 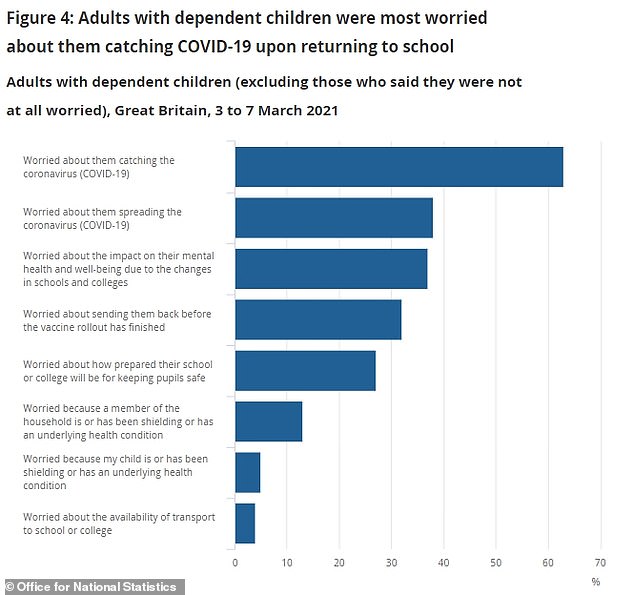 Almost half of parents surveyed also said they were concerned about sending their children back to school, with being worried about them catching Covid as the top reason 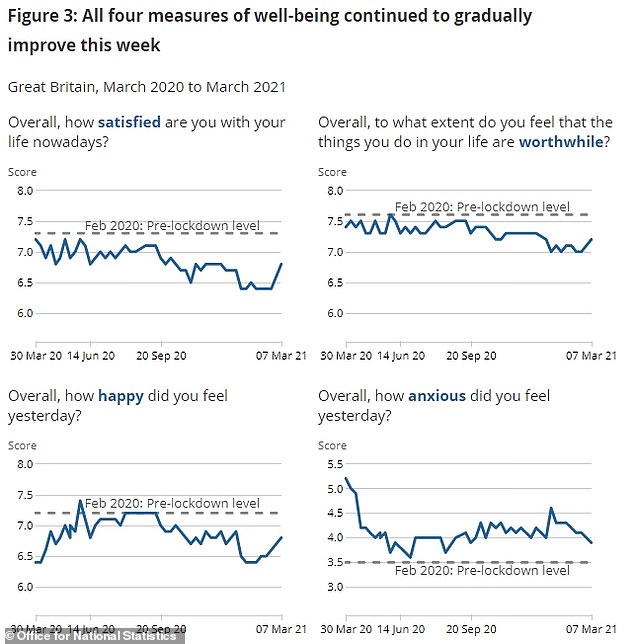 Levels of happiness in the UK also began to increase in March, the ONS found, but they were still below the levels in February 2020 before the pandemic 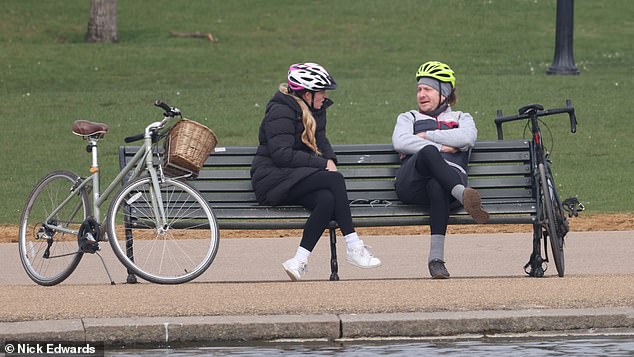 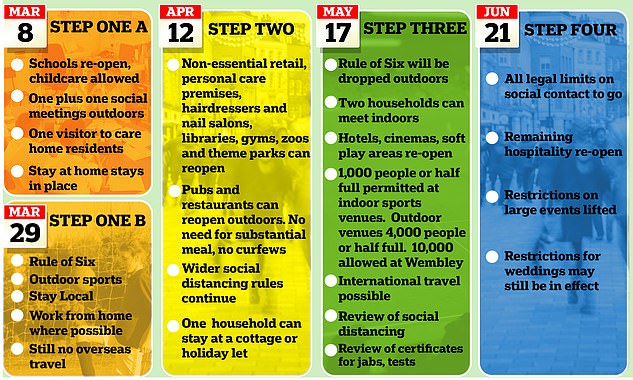 Only one London borough suffered a spike in coronavirus cases last week, Government data has revealed as the capital’s second wave remains firmly in retreat.

Department of Health’s most-up-to-date data showed 31 out of 32 local authorities saw their infection rate dip over the seven-day spell to March 6.

Hammersmith and Fulham recorded the sharpest drop in Covid cases, after they halved in a week. It was followed by Haringey, Brent, Bromley and Bexley, where infections plummeted by more than 40 per cent.

Kingston-upon-Thames was the only London borough to see cases tick upwards, after they rose by 28 per cent last week to 50.1 positive tests per 100,000 residents.

Public health officials in the capital credited the ‘heroic efforts of Londoners’ for the nosediving infection rates last week, but warned they must continue to stay at home and follow the rules.

The Office for National Statistics Opinions and Lifestyle Survey has asked more than 4,000 Britons about their activities every week since March last year.

It was set up to monitor observance of lockdown restrictions, alongside happiness, anxiety and concern levels in the population.

The poll revealed 14 per cent of Britons went out to collect a takeaway in the most recent period, compared to eight per cent in early January.

And 10 per cent went to buy non-essential items in shops, almost double the six per cent at the start of the year.

The survey also found happiness levels had risen to 6.8 out of 10, up 0.3 points from 6.5 reported in early January.

But these were still below the levels in February 2020 before the pandemic hit – when they were around 7.2.

As many as 89 per cent of Britons said they were always or regularly washing their hands with soap and water after returning home from a public place.

The survey also found 46 per cent of adults were still working from home, but 48 per cent said they had travelled in to work.

The Government has asked all Britons to work from home where this is possible.

It also showed vaccine hesitancy rates remain very low, with more than nine in ten Britons saying they would get the jab.

A separate survey by the Mental Health Foundation also found the number of people feeling anxious or worried, or feelings of hopelessness and loneliness, were at lower levels than in the darkest days of January.

The head of research at the Foundation, Catherine Seymour, said: ‘Most people continue to say they are coping well or fairly well with the stress of the pandemic.

‘However, this is considerably lower than at the start of the pandemic when nearly three quarters of people felt they were coping well.

‘There is a cumulative impact here: People may be able to cope well for short periods of time but the longer restrictions are in place the harder it is to cope.’ 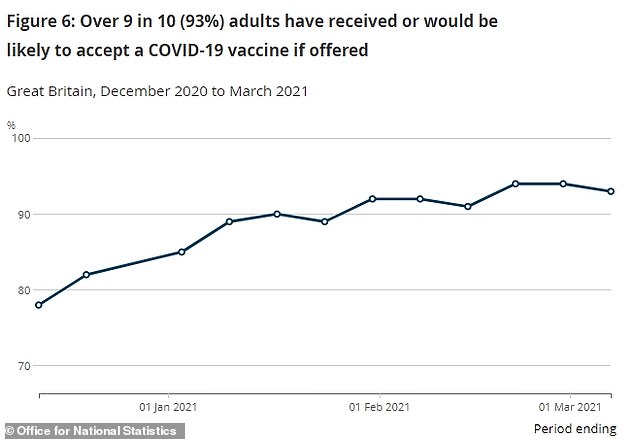 And vaccine hesitancy rates remained low in the UK, with more than nine in ten adults saying they would get the Covid vaccine 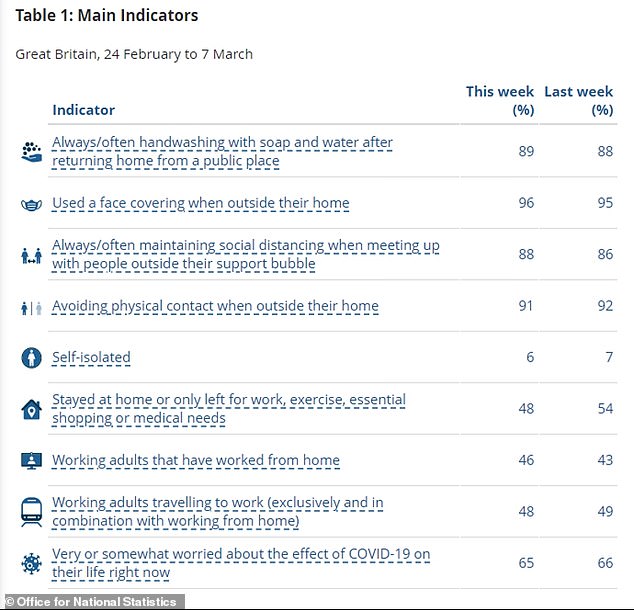 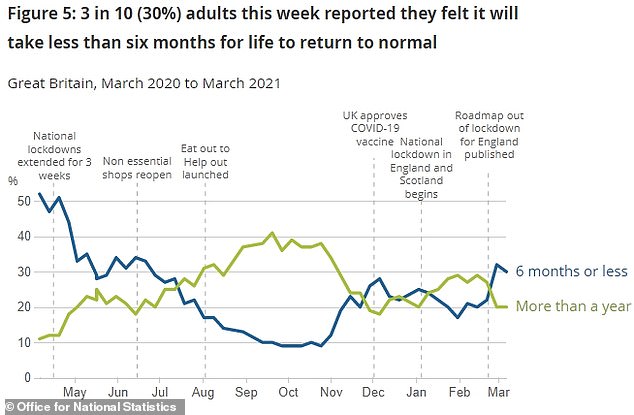 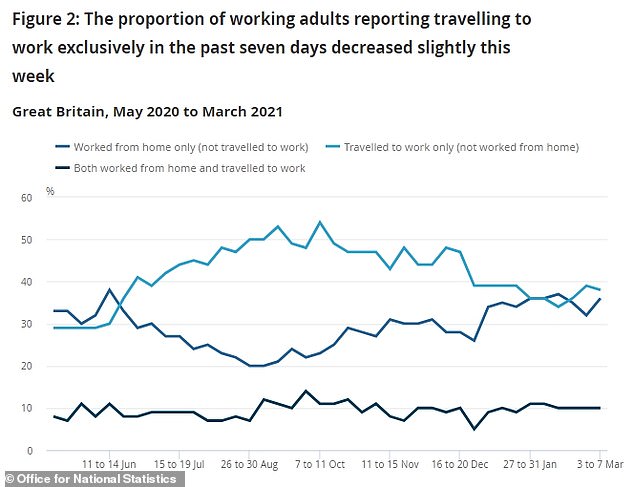 The survey also found more adults were travelling to work than working from home. Government rules ask everyone to work from home where possible

Almost half of 780 parents polled also voiced concern about their children’s return to school or college, the data also showed.

Some 47 per cent of adults said they were very or somewhat worried about their child’s return.

Three in 10 said they were not at all worried about their child returning to educational settings.

The most common reasons for concern were the risk of their child catching or spreading Covid-19, and the impact on mental health and wellbeing caused by changes in schools and colleges.

Parents were also worried about sending their child back before the vaccine rollout has finished, and more than a quarter (27 per cent) were concerned about how prepared their school or college will be for keeping pupils safe.