Over 150 travellers attended a funeral for two teenage brothers in Cork, Ireland, despite social distancing rules in place to limit the spread of the coronavirus.

Members of the local community had pleaded with the attendees to follow public health advice and stay away from the church, but the police watched on as the grand procession moved through Farranree, a Cork suburb.

Irish politicians are demanding answers from the police as to why the funeral was allowed to take place with so many people.

‘Most people are adhering to [the rules] despite the fact that they’re unable to attend loved ones funerals which is a huge burden that causes extreme sadness and upset,’ said Northside independent city councilor Ken O’Flynn.

‘But where the travellers and their funerals are concerned there appears to be one law for the general population and another for this specific ethnic group.’

A funeral procession led by two horse-drawn carriages and followed by over 150 people from the traveller community, either on foot or in separate vehicles made its way towards the Church of the Resurrection at Farranree in Cork, Ireland 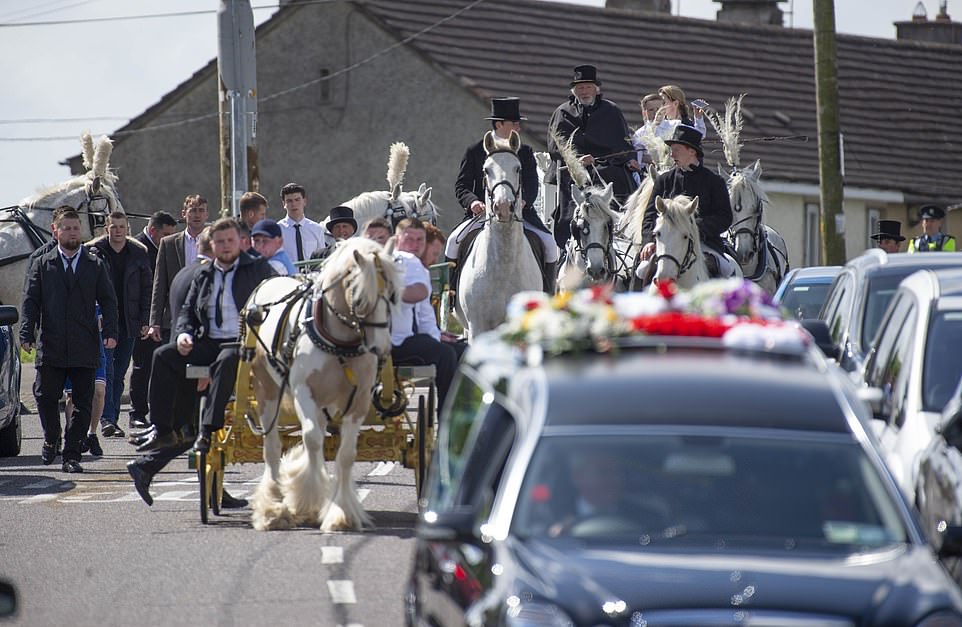 Local residents and politicians have expressed their concern over why the funeral was allowed to take place in this way, given the country’s social distancing measures that are in place to limit the spread of the coronavirus. Police were in attendance to direct traffic and could be seen watching the procession

The funeral was being held for John and Michael Cash, two brothers reportedly in their teens, who died while they were away in America. The circumstances were unclear.

Their remains were repatriated, and have now been buried at St Catherine’s Cemetery in Kilcull as up to 200 people later attended the burial after more gathered outside the church. Guidelines say a maximum of 10 people are allowed to attend burials during the coronavirus crisis.

The funeral procession included two horse-drawn carriages, each led by four horses each, that carried the coffins and family members , with a number of people walking down the road beside the carriages or following in separate vehicles.

Another smaller horse-drawn carriage was also seen ahead of the two larger carriages, as two mounted men led the way. 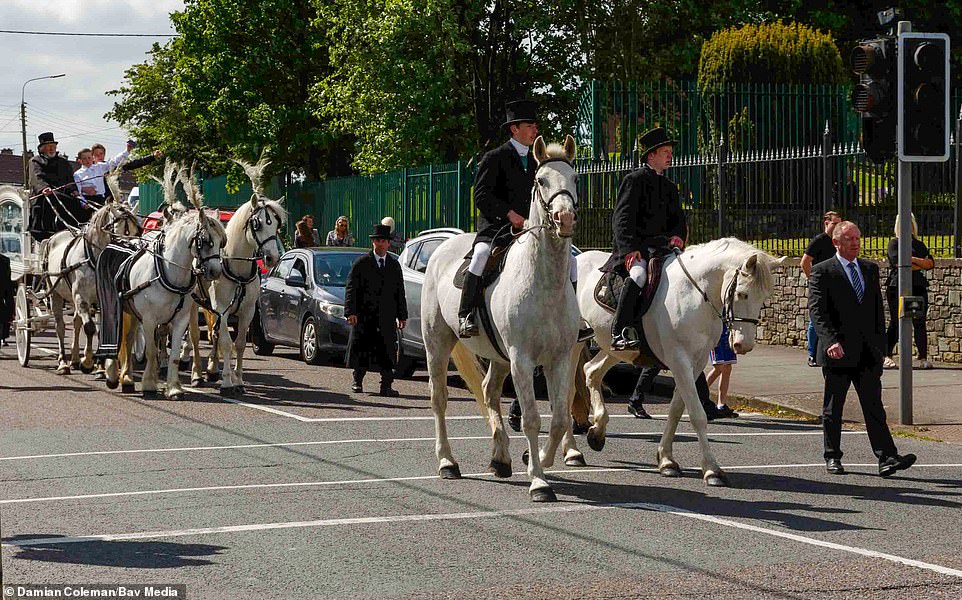 Pictured: Two mounted travellers at the head of the procession lead the way down the street towards the Church of Resurrection in Farranree, a Cork suburb

Despite pleas from the chaplain of Cork’s traveller community asking members of the community to respect public health advice and follow social distancing guidelines that are in place to stop the spread of the coronavirus, large crowds gathered outside of Farranree’s Church of the Resurrection.

While people were not allowed inside the church, locals watched on in disbelief as people embraced and shook hands, and stood in large groups.

It appeared that people had travelled long distances to attend the funeral, with vehicle registration plates from all over the Ireland and the UK visible on the cars and caravans parked outside.

‘I counted licence plates from at least nine counties on cars parked around the church,’ one local resident said. 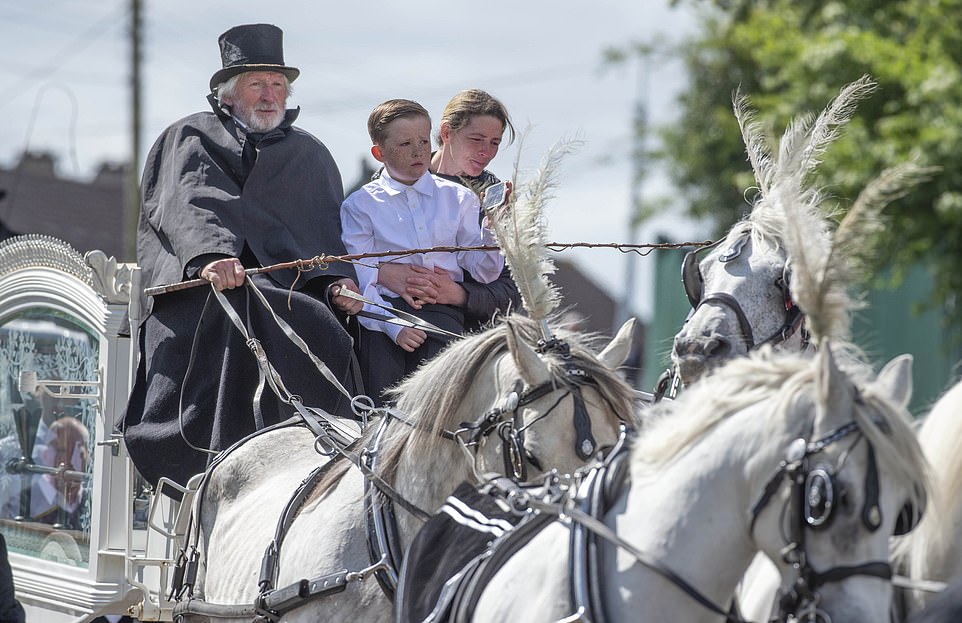 The funeral was being held for two brothers – John and Michael Cash, both reportedly in their teens – who died under ‘tragic circumstances’ in America. Their bodies were brought back to Ireland to be buried 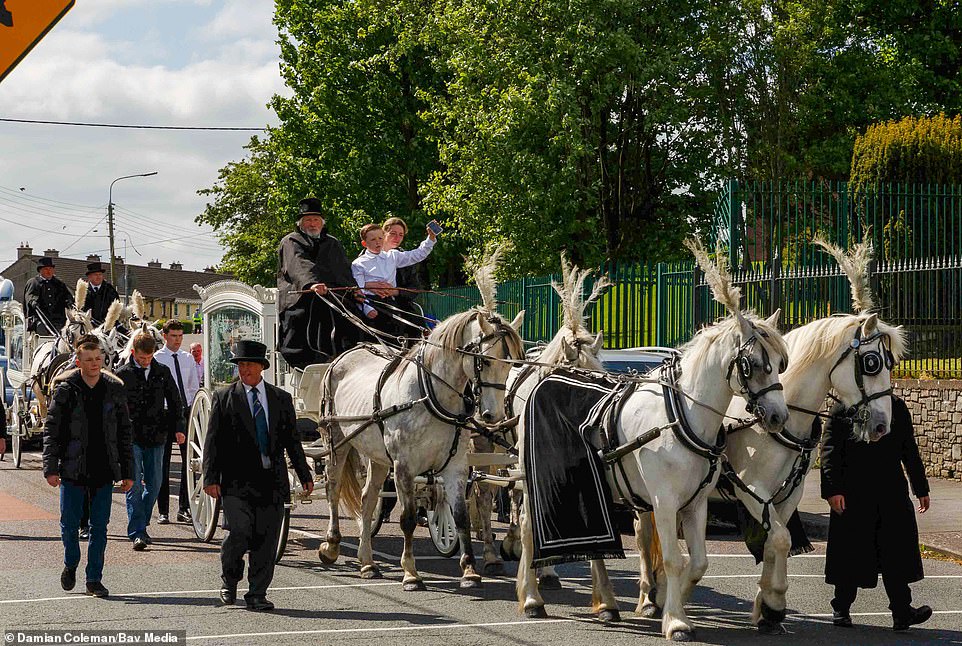 Funerals are still permitted to go ahead in Ireland under government guidelines, but should be limited to a maximum of ten close family members

The Gardaí, the Irish Police, said they had liased with the family before the funeral to ask that everyone adhere to social distancing guidelines, and the family had also asked attendees to respect the measures.

Gardai said in a statement: ‘An Garda Siochana liaised with the family in advance of the funeral and guidelines surrounding funerals were clearly outlined.

‘No incidents of note were reported or are under investigation.’ 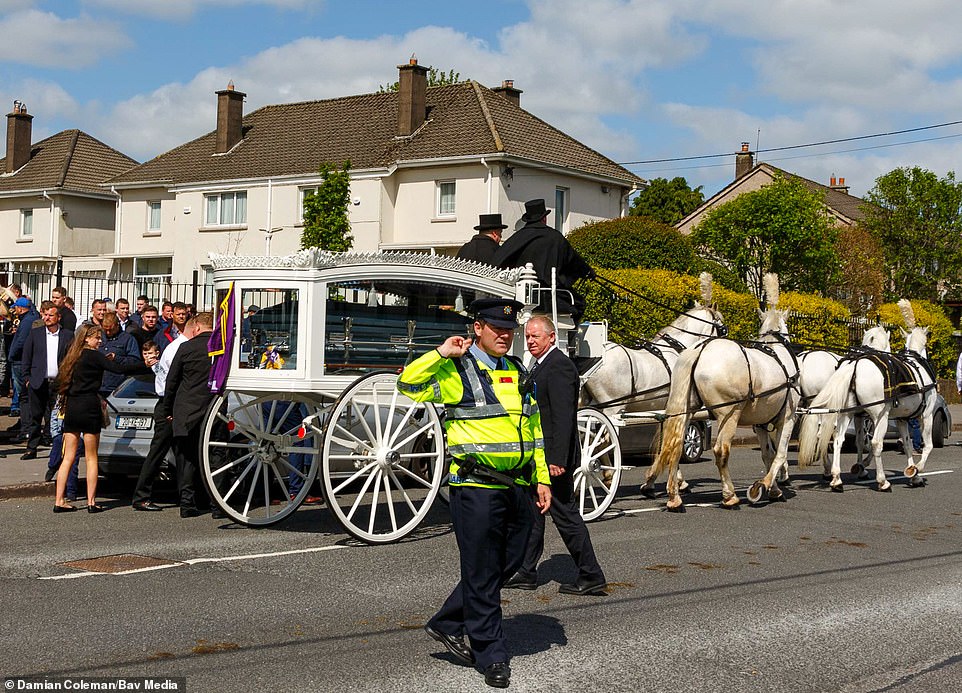 The attendees, said to have travelled from long distances judging by the registration plates on vehicles that were parked along the street, gathered in large groups and could be seen hugging and shaking hands outside of the Church. They were not allowed into the church, but moved on as a group to the burial 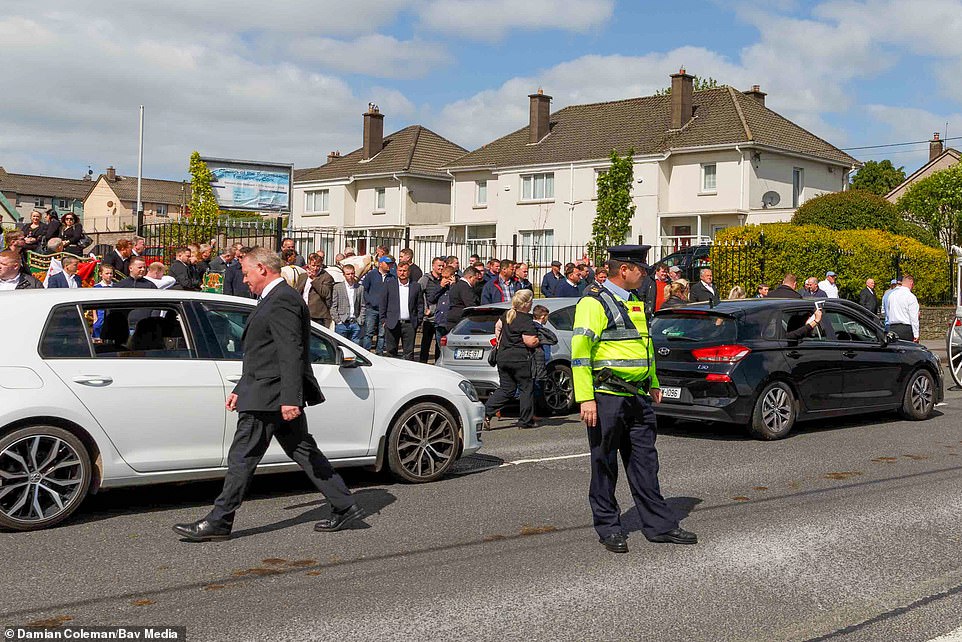 Gardai, Irish Police, were seen on the road directing traffic and observing the procession as it made its way down the street, but reportedly did little to stop groups from gathering. Irish politicians have said they will be writing to police chiefs demanding answers as to why the funeral was allowed to go ahead

O’Flynn said that while he appreciated the tragic circumstances under which the funeral was being held, he said everyone had to adhere to the same guidelines.

‘I know this is a tragic day and to lose two young men is a terrible tragedy for any family, but I have friends and family who have had the heartbreak of not being able to attend funerals of loved ones and have to cope with that heartbreak and grief,’ the Councillor said to the Irish Sun.

‘If everyone was to do that there would be no adherence to the Lockdown guidelines resulting in a complete breakdown of the rules. Where would we be then.’

He added that he would be contacting the Chief Superintendent in Cork as well as other police authorities to ask what they plan to do in the future under similar circumstances.

Funerals are still allowed under government restrictions, but masses are limited to ten immediate family members only.