More than 200 Central American migrants escaped from a southern Mexican immigration facility Monday, after being detained while trying to cross the country to get to the U.S. border.

Video shows the moment migrants were chased by Mexican security forces on a street in Villahermosa, Tabasco, after they were able to break out during a riot at a local National Institute of Migration center.

The escapees were among 424 Central Americans who entered Mexico in small groups Saturday through a border passageway that connects Guatemala with the Tabasco municipality of Tenosique.

They arrived before a much larger caravan of 2,000 migrants, who have been blocked from crossing the Mexico-Guatemala border as part of an agreement between Mexican authorities and the Trump administration to stem the arrival of migrants making it to the United States.

In video of the break-out, a man is seen running down the street in the town of Ciudad Industrial carrying a child in his arms before disappearing.

Members of the National Guard sped down a block and attempted to engage the migrants in peaceful talks in order to get them to return to the facility.

Mexican news outlet Proceso reported that 100 of the migrants from Honduras, El Salvador, Guatemala and Nicaragua were eventually apprehended.

A bystander recorded the moment more than 200 migrants, including a man carrying a child (pictured center) and two other individuals (pictured top right), escaped from an immigration center in Tenosique, Mexico 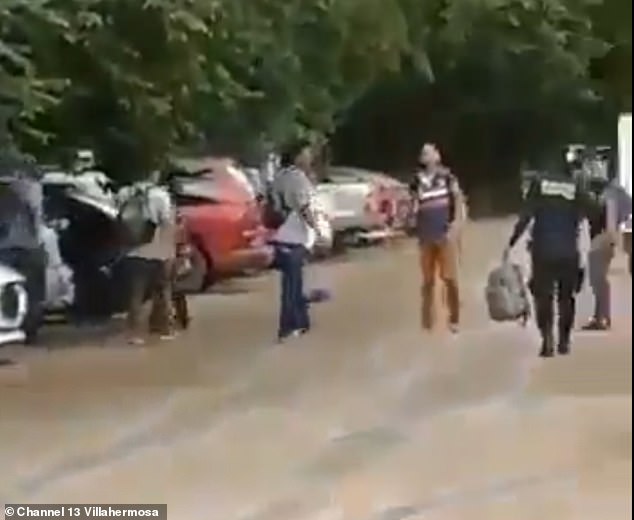 A member of Mexico’s security forces (right) attempts to get a group of migrants to voluntarily turn themselves in after escaping from an immigration station in Villahermosa, Tabasco, on Monday

On its Facebook page, La 72, a shelter serving migrants in Tenosique, claimed that immigration officials lied to the migrants and made empty promises of helping them find employment and assisting them with the legal migratory status.

‘They will be deported in an express fashion to Central America,’ La 72 wrote. ‘Those who remain will suffer months of confinement, abuse and psychological abuse of [immigration] agents.’

The detention center breakout came as a hundreds of other migrants were left stranded in a sort of no-man´s land on the river border between Guatemala and Mexico, after trying to break past border officials on the Rodolfo Robles International Bridge that connects Tecún Umán, Guatemala, to the Mexican state of Chiapas.

A caravan of 2,000 migrants had arrived at the border, and demanded Mexican authorities give them free passage towards the southern United States border.

Hundreds of migrants subsequently took advantage of the Suchiate River’s low tide and waded across to the Mexican border town of Ciudad Hidalgo, where they were blocked by National Guard soldiers. 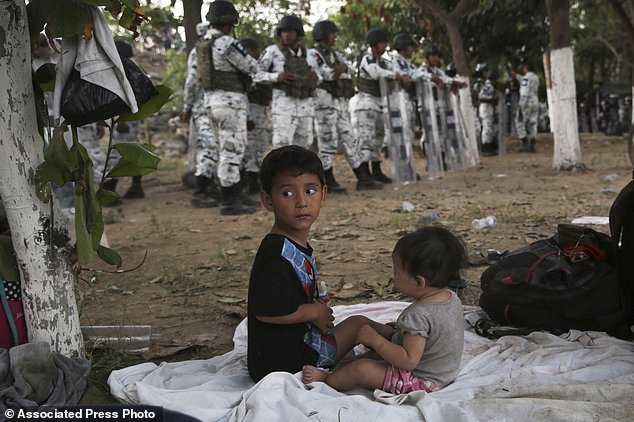 Migrant children campout on the Mexican shore of the Suchiate River on the border with Guatemala, near Ciudad Hidalgo, Mexico, on Monday a group of Mexican National Guardsmen form a line to block any migrants from further crossing into Mexico 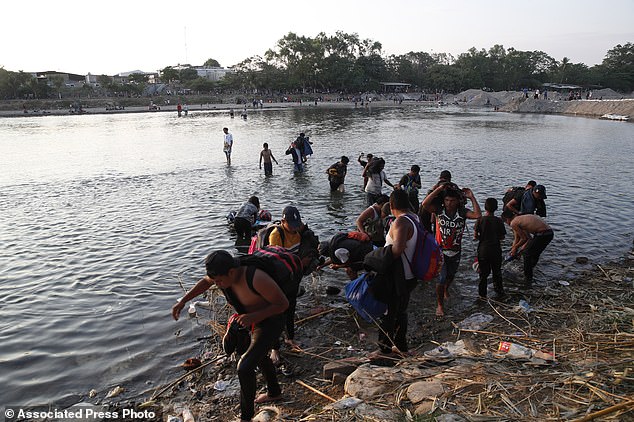 Central American migrants return to the Guatemala shore of the Suchiate River on the border with Mexico, in Tecún Umán, Guatemala, on Monday after their path to Mexico was blocked by Mexico’s National Guard 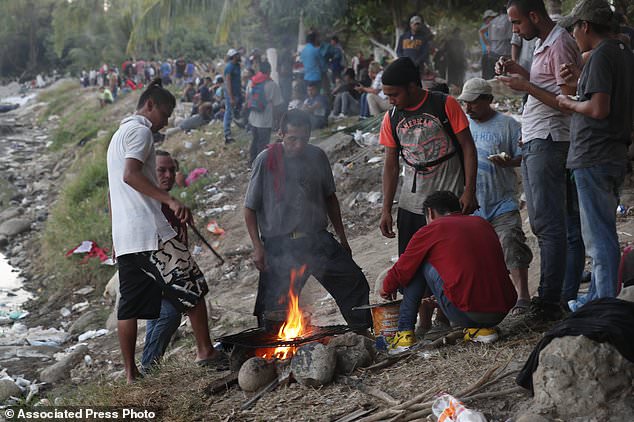 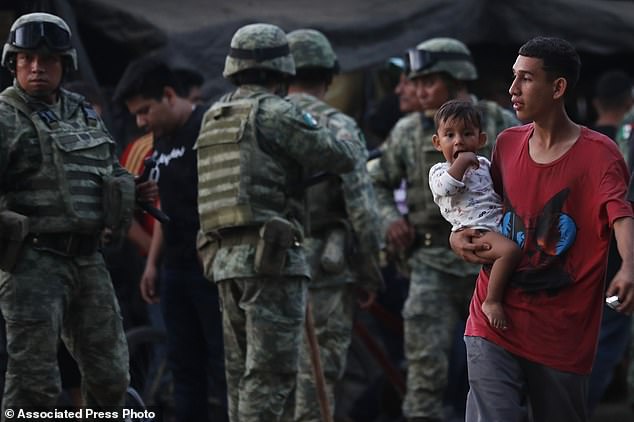 With Mexican National Guardsmen behind them, a man carries a child on the Mexican shore of the Suchiate River on the border with Guatemala, near Ciudad Hidalgo, Mexico, on Monday. Hundreds of migrants remain there waiting to decide if they will return back to their homes or attempt to continue their journey to the Mexico-United States border and challenge U.S. President’s Donald Trump asylum policy 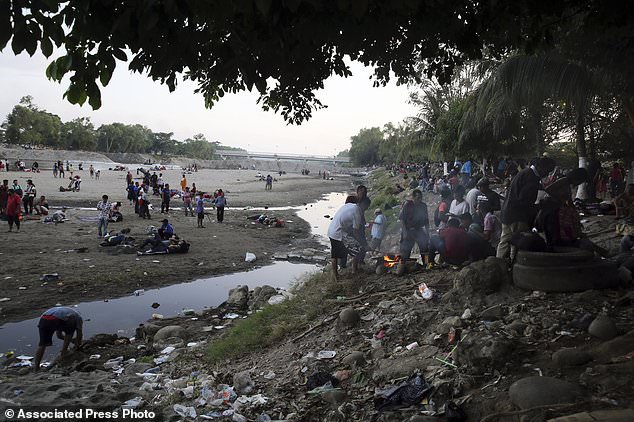 Hundreds of Central Americans remain in ‘no man’s land,’ stuck on the edge of the Suchiate River in southern Mexico after they stormed the border on Monday in an attempt to force their way across the Mexican state of Chiapas 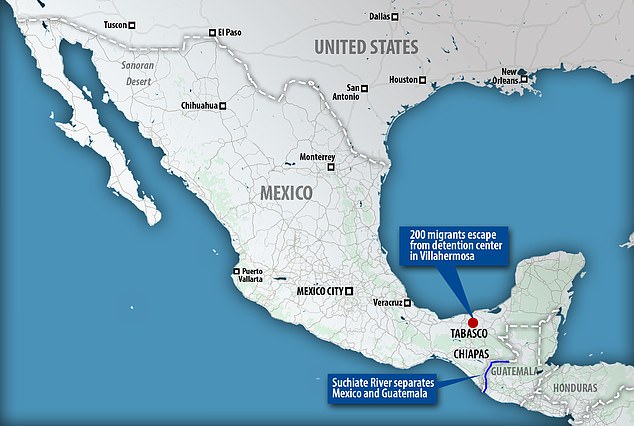 The troops responded with tear gas as desperate Central Americans scuffled with the soldiers.

Hundreds of migrants were trapped along the banks as their path forward was blocked by Mexican troops with riot shields, and about 100 National Guard agents continued to form a barrier with anti-riot gear into the night.

Naked children played amid the sand and trash Monday evening as clothing and shoes hung from the trees to dry along the Suchiate River, normally a porous waterway plied all day by rafts ferrying people and goods across.

Men grilled a fish over a small fire below the border bridge, and migrants bedded down under blankets on the banks or dry sections of the riverbed without knowing what might come next. 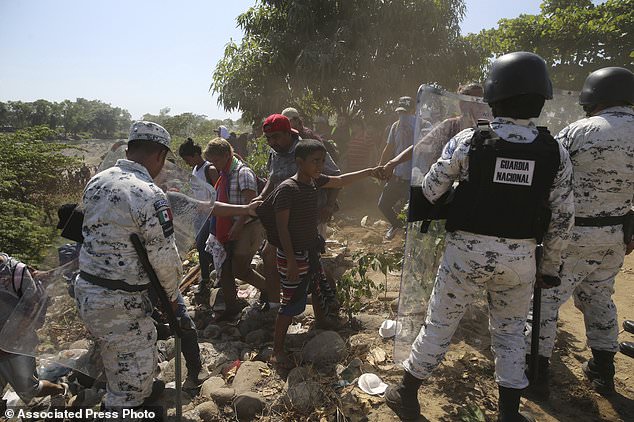 A young Central American migrant is held by fellow migrants as they are blocked by Mexican National Guards after they crossed the Suchiate River with a group of migrants from Guatemala to Mexico, on Monday

A return home to impoverished and gang-plagued Honduras, where most of the migrants are from, was unthinkable.

‘We are in no-man´s land,’ said Alan Mejía, whose 2-year-old son was cradled in his arms clad only in a diaper as his wife, Ingrid Vanesa Portillo, and their other son, 12, gazed at the riverbanks.

Mejía joined in five previous migrant caravans but never made it farther than the Mexican border city of Tijuana.

‘They are planning how to clear us out, and here we are without water or food,’ said a desperate Portillo. ‘There is no more hope for going forward.’

Unlike with previous caravans, there was no sign of humanitarian aid arriving for those stuck at the river.

The push also challenged Mexico´s ramped-up immigration policing that began last year in response to threats of economic tariffs from Trump, a change that effectively snuffed out the last caravan in April. 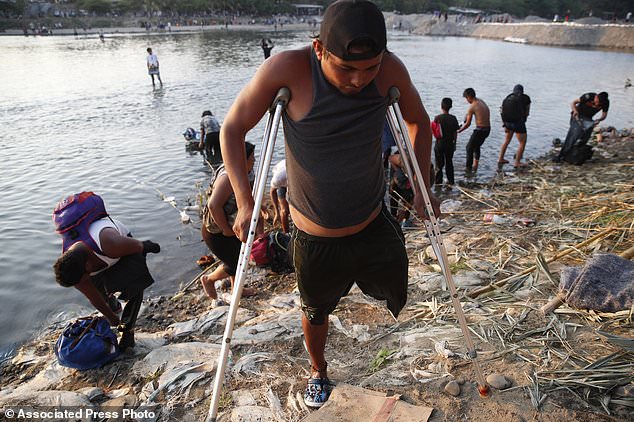 A disabled Honduran migrant who is missing a leg, returns to the Guatemala shore of the Suchiate river on the border with Mexico, in Tecun Uman, Guatemala after being blocked from crossing into Mexico 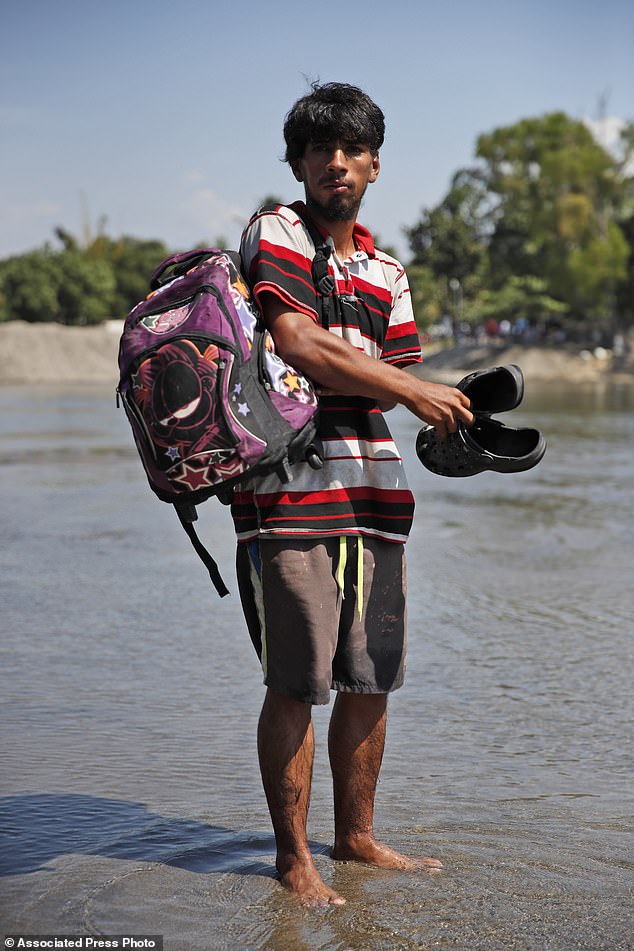 Honduran migrant Manuel de Jesus Iraheta, poses for a photo in the Suchiate River, after returning to the Guatemala shore on the border with Mexico, in Tecun Uman, Guatemala

Most of the migrants, however, stayed at the river´s edge or stood in its waters trying to decide their next move.

‘We never thought they would receive us like that,’ said Melisa Ávila, who traveled from the Honduran capital of Tegucigalpa with her 12-year-old son and was resigning herself to the prospect of spending the night outdoors. ‘They treated us like dogs.’

As feared, children suffered in the chaos. On the Mexican bank an unconscious 14-year-old girl was carried away for medical attention Monday.

Later along the highway, a mother sobbed after realizing her youngest daughter had been separated when migrants tried to escape authorities. Another migrant who had been helping her by carrying the 5-year-old ran in another direction when the migrants scattered and she hadn’t been able to locate them.

In an approach that developed after the first migrant caravan in late 2018, Mexican officials seem to be succeeding in their effort to blunt large-scale incursions by breaking up the mass of people repeatedly and into increasingly smaller groups.

Over the weekend, government officials convinced about 1,000 people they should enter legally via the bridge.

The National Immigration Institute issued a statement saying it would detain any migrants in the country illegally, hold them in detention centers and deport those who did not legalize their status. Any who made it through and continued north could expect a gauntlet of highway checkpoints. 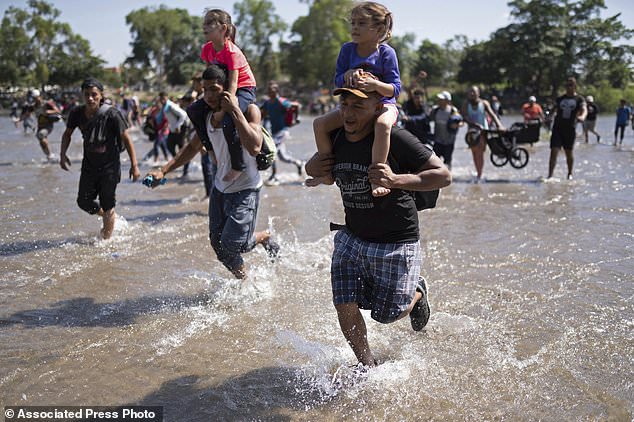 Central American migrants carry children as they run across the Suchiate River from Guatemala to Mexico, on Monday 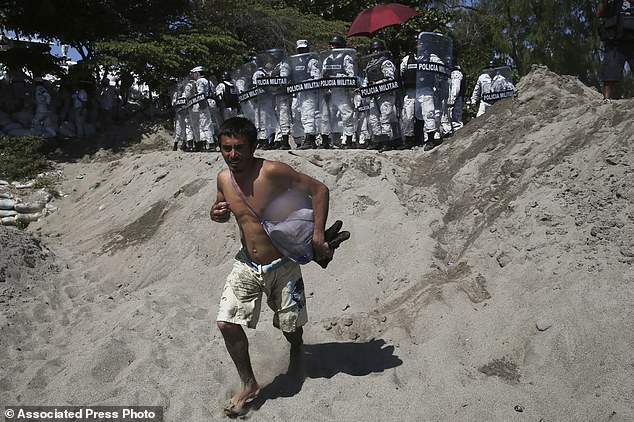 A Central American migrant, who crossed the Suchiate River from Guatemala to Mexico, on Monday, is blocked by Mexican National Guards on the riverbank near Ciudad Hidalgo, Mexico

The Mexican government last Friday offered migrants 4,000 jobs to work in the south, but those who do not accept it or seek asylum will not be issued safe conduct passes to the United States, the interior ministry said.

The new caravan is the first since last fall, when Washington signed bilateral agreements with Guatemala, Honduras and El Salvador to reduce the number of migrants crossing the southern border.

More than 55,000 asylum seekers have requested asylum at the U.S. border and been returned to Mexico to wait out cases that will take months, if not years to resolve under the “Remain in Mexico” program, also known as the Migrant Protection Protocols.

Beginning with Guatemala in July of 2019, the U.S. government signed agreements with Guatemala, Honduras and El Salvador that would allow the U.S. to send asylum seekers from other countries to Central America.