New Jersey cops were cheered by a crowd of more than 200 anti-lockdown protesters outside a gym when they told the owners they didn’t have to close down.

Atilis Gym’s Bellmawr branch opened its doors in front of a swarm of demonstrators on Monday at 8am in violation of the Garden State’s stay-at-home orders because owner Ian Smith was ‘sick and tired’ of having his rights ‘trampled’ by Democratic Governor Phil Murphy.

Cops then made their way through the people holding American flags and Trump 2020 signs and chanting ‘Let’s get back to work’ and told staff they wouldn’t have to shut down, even though they were breaking the executive order requiring all non-essential businesses to stay closed.

‘We are and only were here for everybody’s safety today. We planned for the worst and hoped for the best, and it seems like that’s what we have out here today,’ an officer said around 10.30am to the crowd and people inside the gym. ‘Formally, you are all in violation of the executive order. On that note, have a good day. Everybody be safe.’ 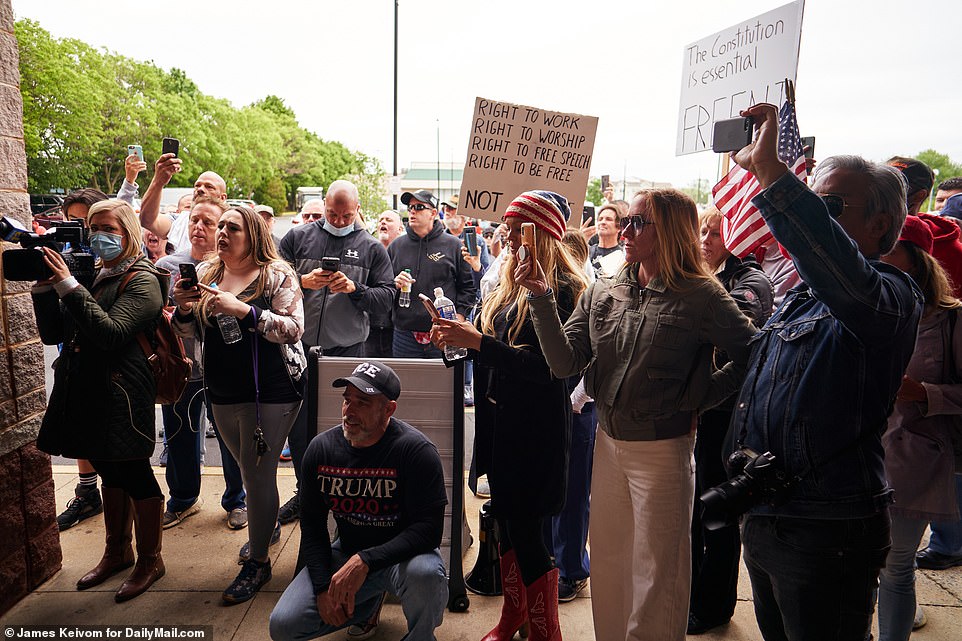 Locals held signs protesting that they had the right to work, worship, to free speech and to ‘be free’ as they fought for the gym to reopen 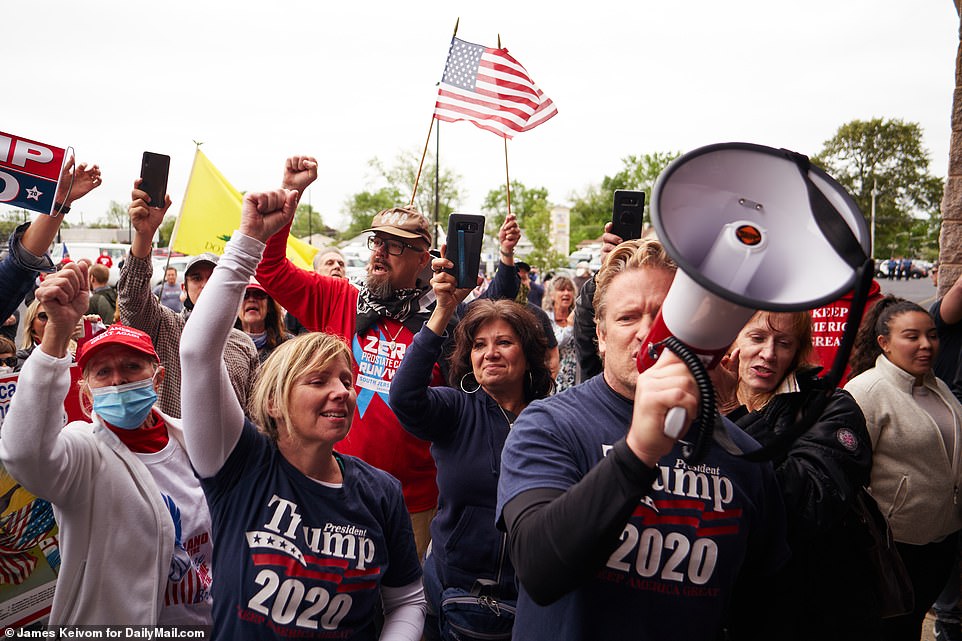 Many of the people who gathered in New Jersey, the second worst affected state, wore clothing and held signs in support of Trump’s re-election 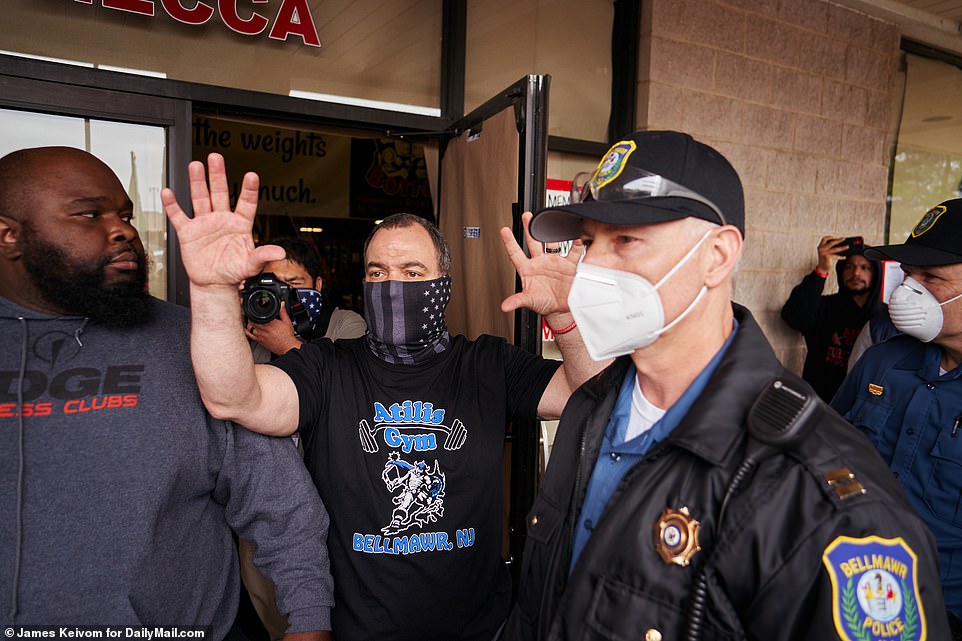 A cop told the owners and the crowd: ‘Formally, you are all in violation of the executive order. On that note, have a good day. Everybody be safe’

Some protesters wore protective face masks, others did not. Police were on the scene overseeing the protests but it didn’t appear anyone had been fined for defying social distancing rules.

In Camden County, anyone who goes to a business that is open in violation of an executive order could face a disorderly persons offense. The individual could be fined up to $1,000 for each offense and spend up to six months in jail.

Last week Governor Murphy said he was aware of the gym and said: ‘They’re out of compliance and that’s not going to be tolerated.’

Murphy reported Sunday that there had been 272 deaths from COVID-19 in Camden County where the gym is. There are 5,455 cases in the county.

Gym owner Smith and his business partner Frank Trombetti – whose mother is ill with coronavirus – said they are not denying the pandemic is dangerous but they are thinking of what’s best for the state.

‘We truly believe that if we don’t do this in the end, we will have zero rights and no say in what happens,’ Trombetti said as he asked people to gather in the parking lot to show support. 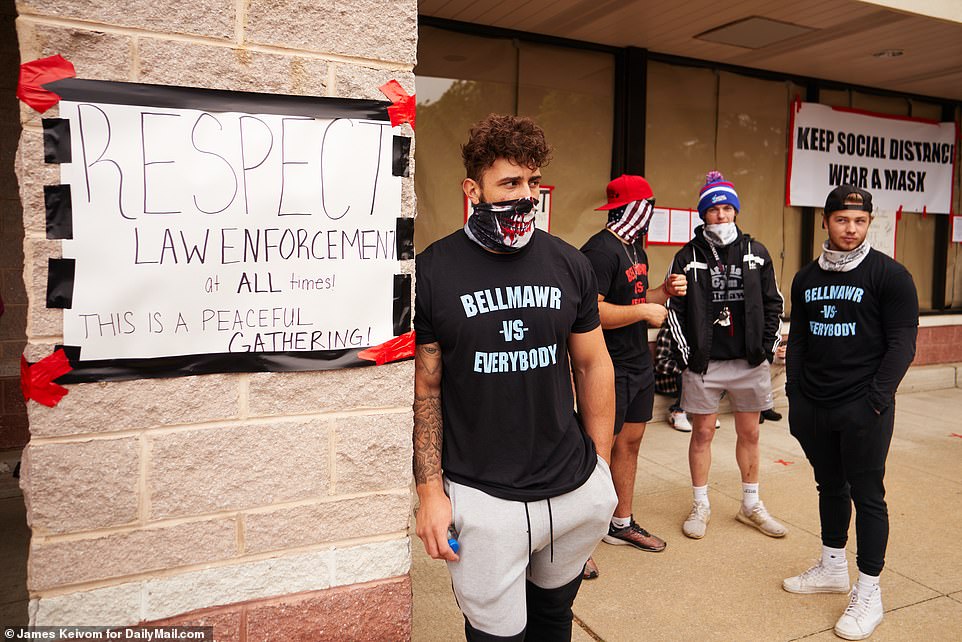 Cops allowed protesters to remain gathered outside the gym after it reopened to fitness enthusiasts. Some stand next to a ‘respect law enforcement sign’ 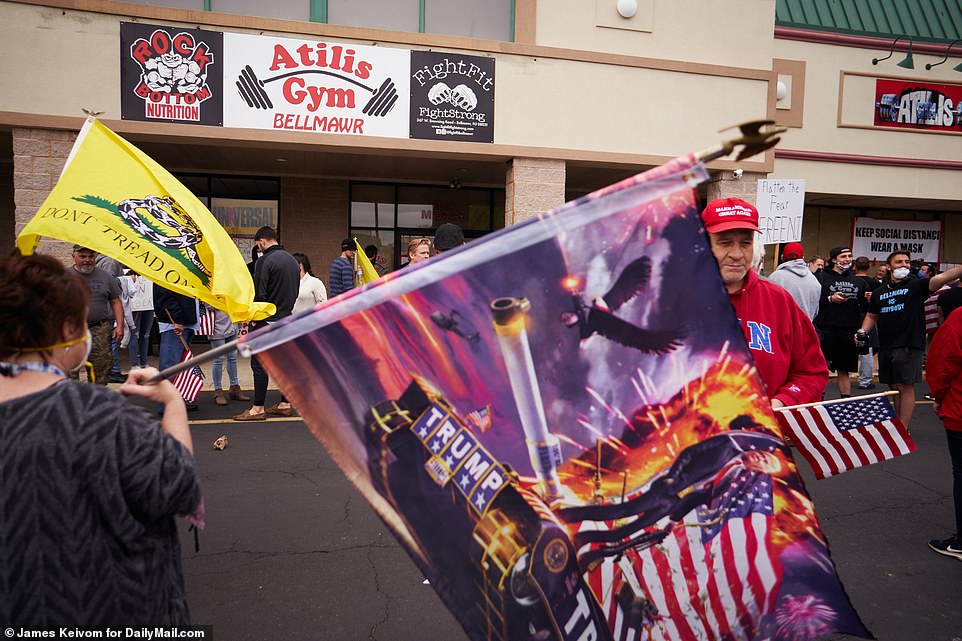 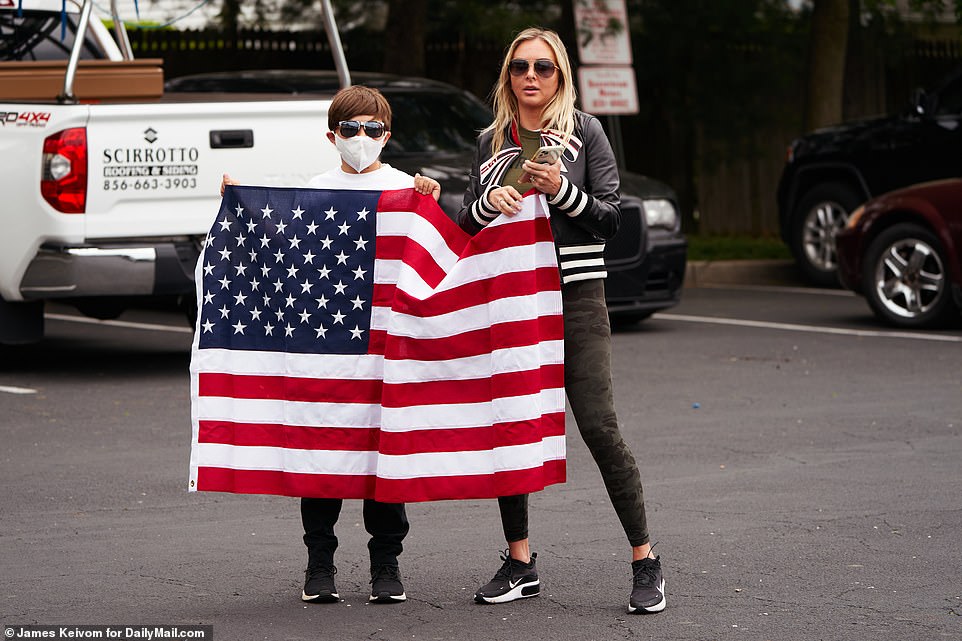 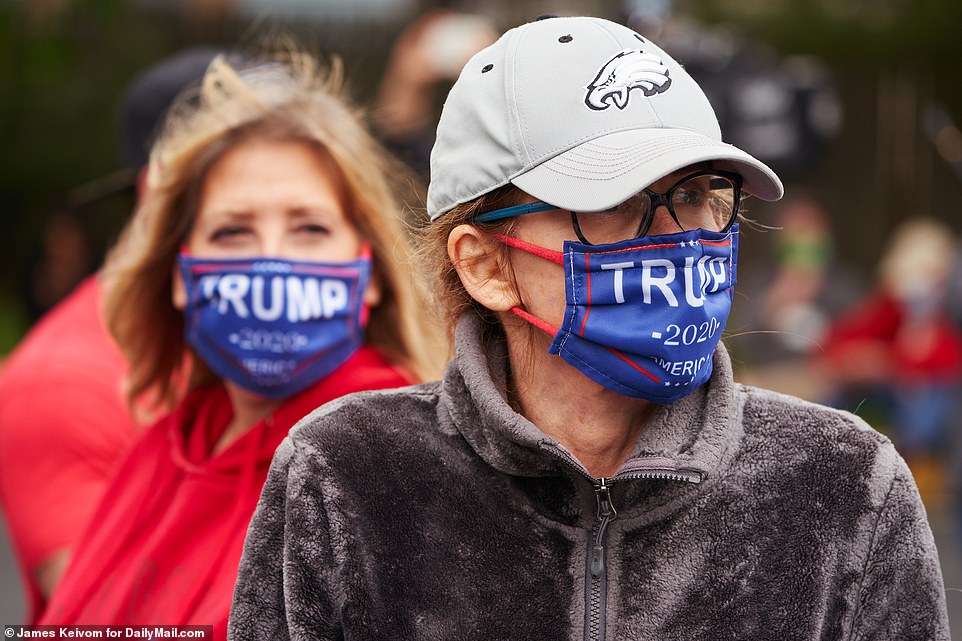 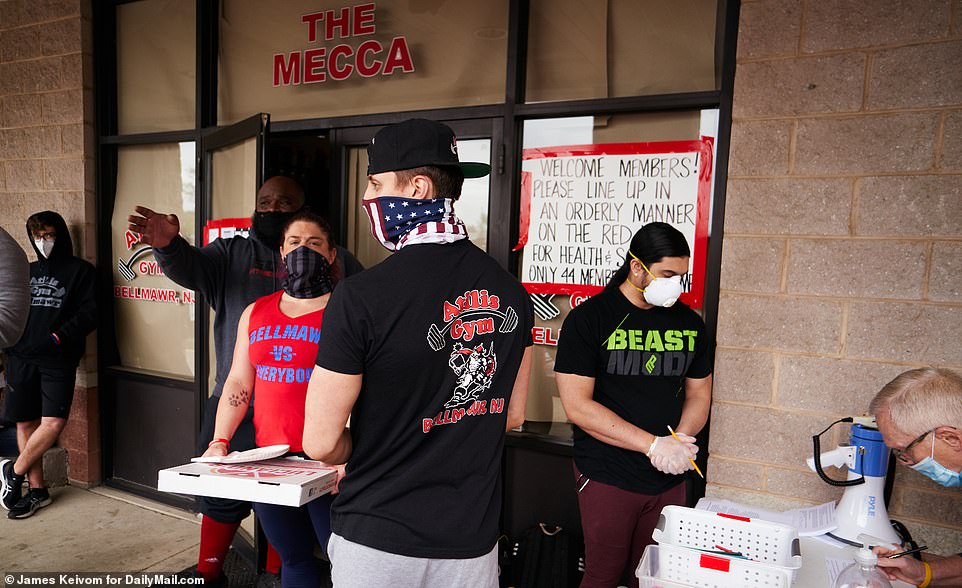 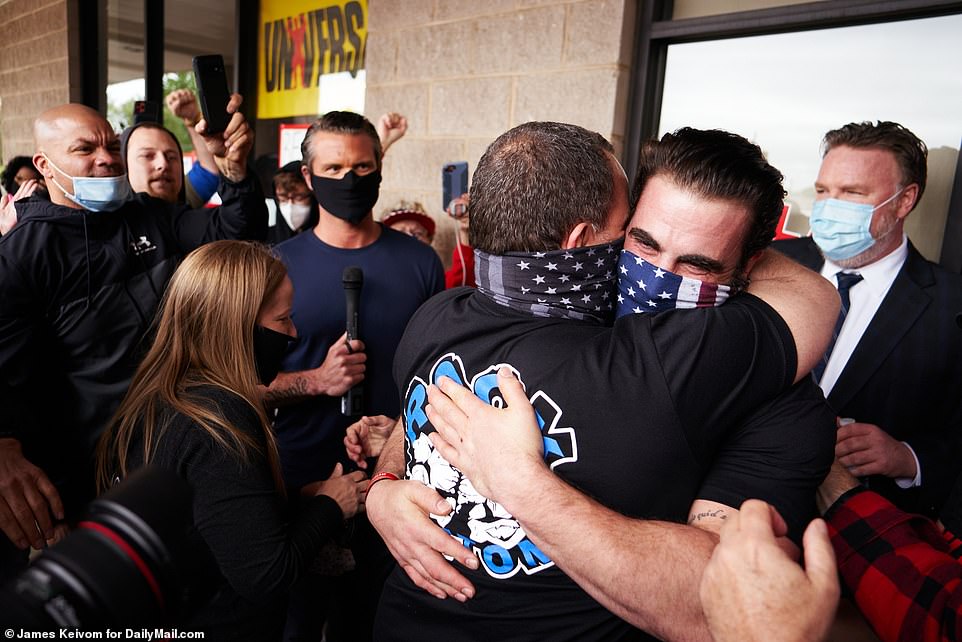 Atilis Gym co-owners Frank Trumbetti, right, and Ian Smith, both wearing masks, hug and celebrate after police notified the crowd that they will not enforce a state order on Monday 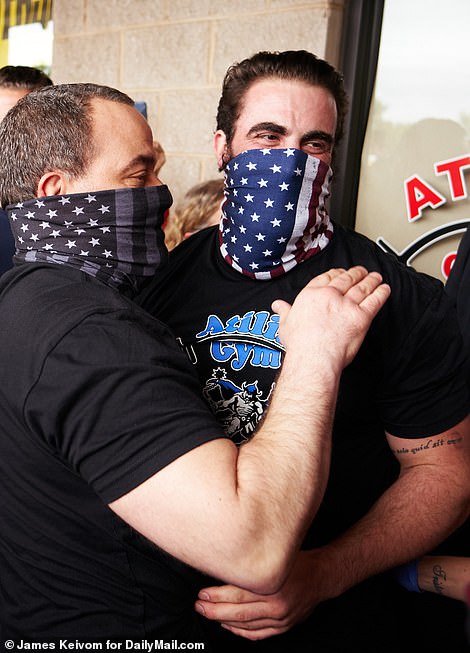 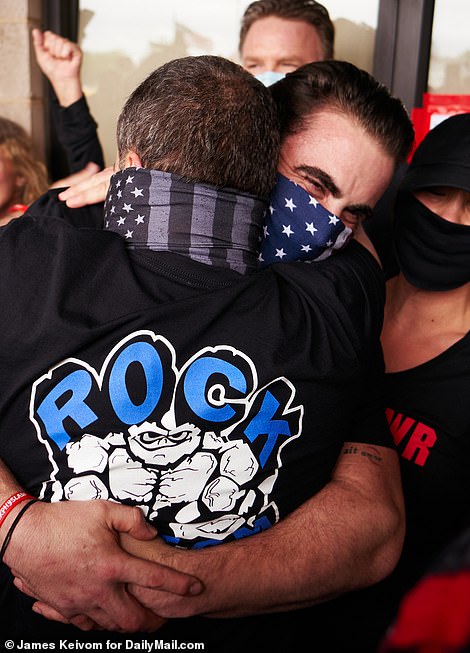 Co-owners Ian Smith and Frank Trombetti previously said they believe that if Walmart can be open, their fitness center should be too. Trombetti’s mother is currently sick with COVID-19 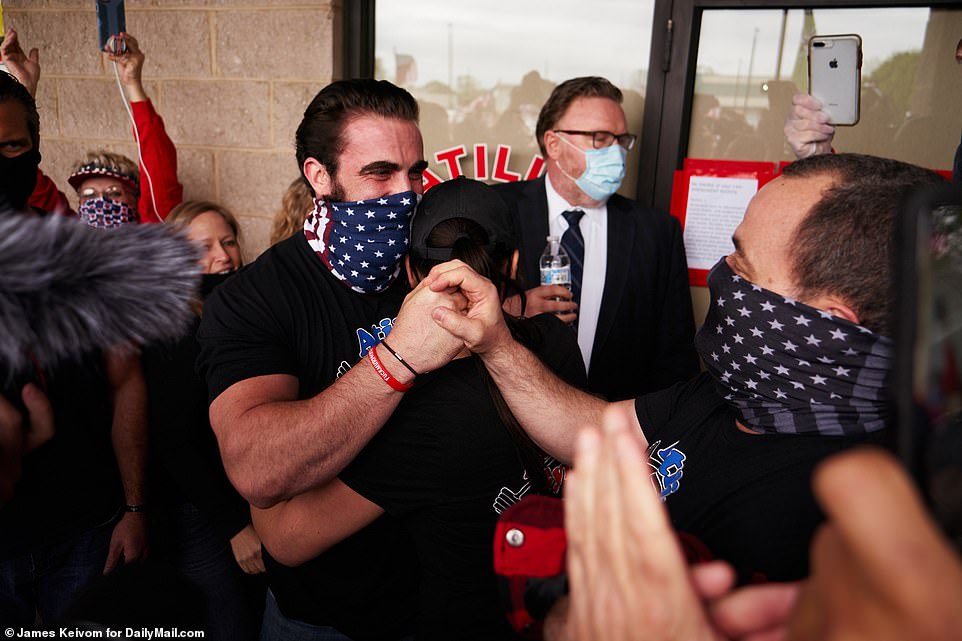 No gloves: The owners are seen celebrating with a fist bump and an open hand shake after they were allowed to continue

He previously said that he is getting around the order because the gym is a private members facility and not open to the general public, which lockdown measures forbid.

Smith has vowed to operate at only 20 percent capacity and in a set of instructions shared on social media the gym has asked people to keep masks on at all times except when they’re in the middle of a set.

They’ll have hand sanitizer at the door and around the gym and they’ll ask members to complete a medical questionnaire as well as have their temperature checked.

Anyone who doesn’t comply will be asked to leave.

The also shared cleaning initiatives, including the use of an electrostatic spray set to clean equipment.

For now they’re operating on a first-come-first-serve basis while they work on scheduling. 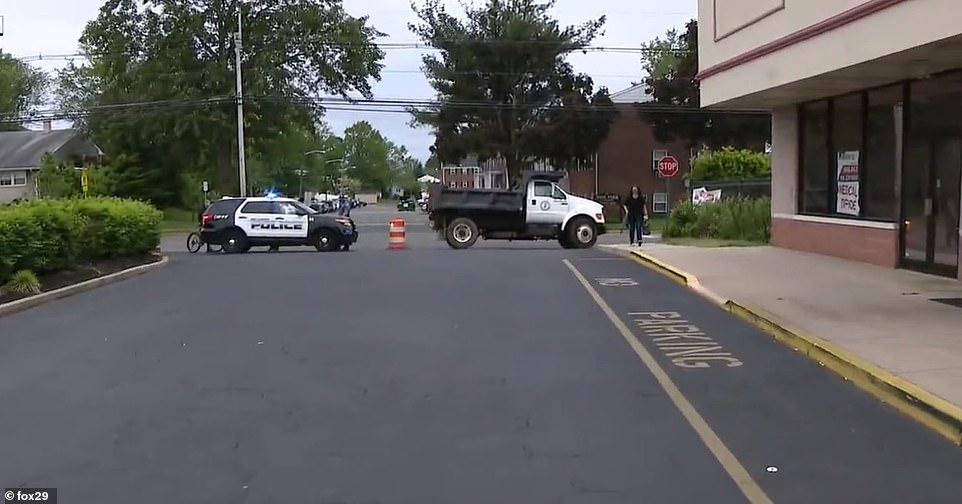 It was estimated that more than 200 people were outside in the parking lot. Some wore protective face masks, others didn’t 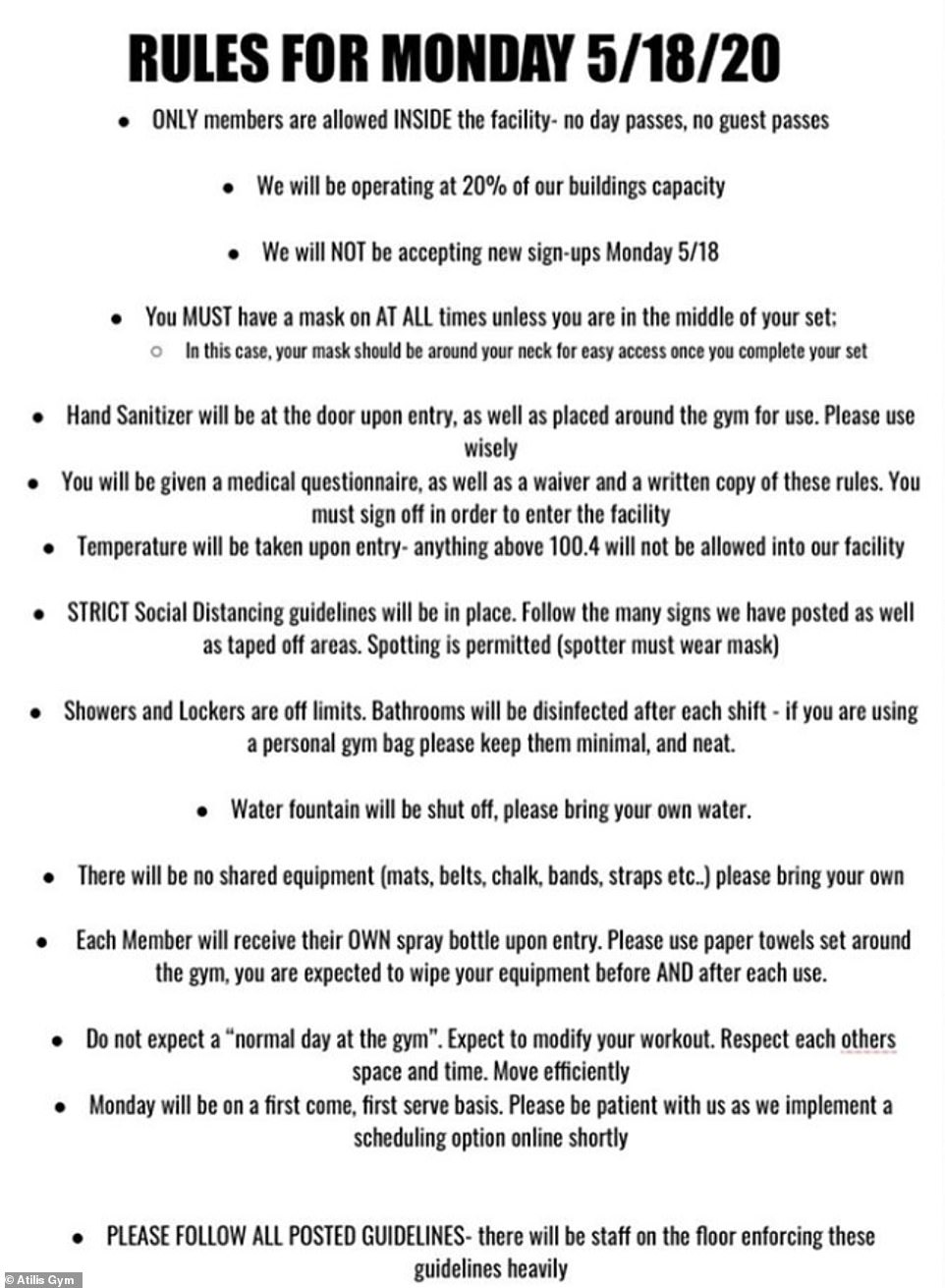 They’ll have hand sanitizer at the door and around the gym and they’ll ask members to complete a medical questionnaire as well as have their temperature checked. Anyone who doesn’t comply will be asked to leave

‘Our actions on Monday are going to be grounded in the ideals of civil disobedience,’ Smith previously told Fox News’ Tucker Carlson.

‘What we intend to showcase is that we reject the premise of essential versus nonessential businesses. Anything that Walmart can do with hundreds, if not thousands, of people passing through the stores every day … a small business, whether it be a restaurant, a gym, a hair salon, or anything else, can replicate those things … and we plan to do that.’

Atilis also has branches in Wildwood, Ocean City, Sea Isle City, Avalon and Egg Harbor Township (EHT) and Smith’s business partners were also looking ahead to how they could reopen when there were no end date to the lockdowns in sight.

Last Thursday one gym owner said he’d received a call from the chief of staff for the governor and said they’d arranged to discuss Gyms and Fitness Mentors on Monday afternoon.

A group of owners said they would wait for the meeting with the governor before deciding their best move. 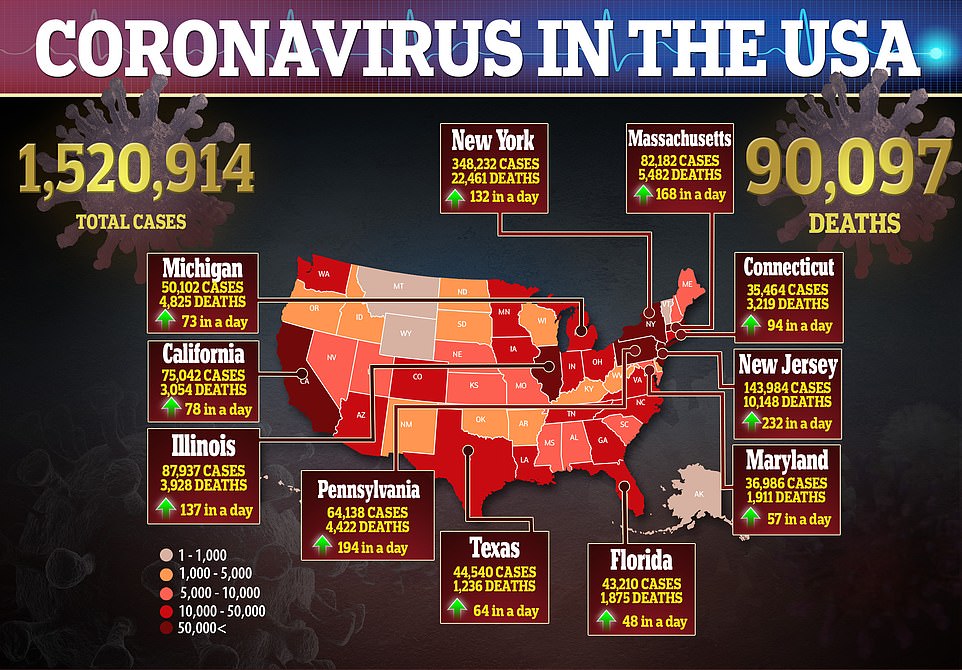 There had been 272 deaths from COVID-19 in Camden County where the gym is. There are 5,455 cases in the county