More than 2,000 songbirds have died from a Salmonellosis outbreak in California

The California Department of Fish and Wildlife (CDFW) reports at more than 2,000 songbirds have died in the state from December 20 through March 8 – and the culprit is sitting in people’s backyards.

The agency determined the birds are contracting Salmonellosis, a disease cause by Salmonella bacteria, by sharing bird feeders with other infected avian species.

Pine siskins, a species of finch that winters in California, are the primary species affected by the outbreak, along with a small number of goldfinches.

‘When there is a disease circulating in the population, bird feeders ensure the birds remain in really close contact with one another, as well as other birds, as they use the feeder (think of having to share one dinner plate or one water glass with your whole family as well as with everyone in your neighborhood without washing it between each individual),’ Krysta Rogers, Senior Environmental Scientist with CDFW told DailyMail.com in an email.

‘Bird feeders also keep the birds in one location for longer periods of time allowing feces to build up.’

‘If there are sick birds in that group, they will shed the Salmonella bacteria in their feces, contaminating the area leading to more and more birds becoming sick and dying from the infection as they try to access the feeder or feed on the spilled seeds under the feeder.’

‘The most effective way to slow the spread of this infection and reduce mortality is to remove the bird feeders because that is primarily where this disease spreads.’

The are contracting Salmonellosis, a disease cause by Salmonella bacteria, by sharing bird feeders with other infected avian species. Pine siskins (pictured) are the primary species affected by the outbreak

Salmonellosis is an infection with a Salmonella bacteria that lives in the intestinal tracts of animals, including birds.

And it can be transmitted to humans who eat food contaminated with animal feces.

The disease is found to spread to birds during the winter months and has occurred in California previous years.

The last event was between December 2019 and April 2020, but only 110 dead birds were reported, but Rogers says ‘only about a quarter were suspected of having Salmonellosis.’ 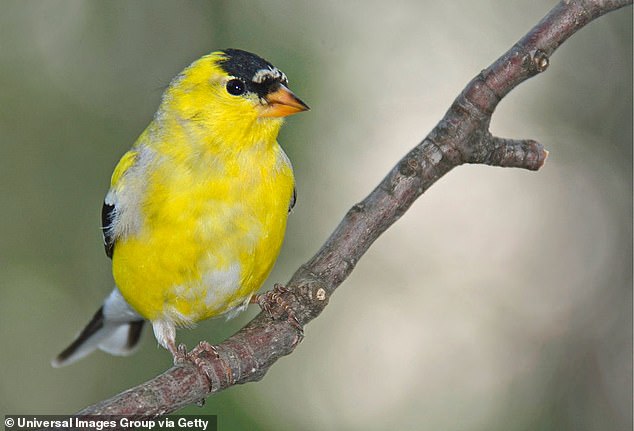 ‘Our lab confirmed Salmonellosis in several birds including pine siskins and goldfinches submitted for testing, so it appears the infection was circulating at a relatively low level within the population last winter,’ she continued.

However, this outbreak appears to be more rampant and specifically along California’s coast.

‘Salmonellosis occurs periodically in pine siskins in some winters throughout their range. When large numbers of pine siskins congregate, the disease can spread rapidly causing high mortality,’ Rogers shared in a statement.

Most birds die within 24 hours of infection.’

Birds that are sick will often have ruffled feathers and move slowly. Some also experience labored breathing or their eyes may appear swollen and partially closed.

If you find a bird that looks ill, the CDFW urges you to wear disposable gloves and wash hands if you plan on disposing of the carcass, along with handling birdfeeders.

‘It is unclear if Salmonella bacteria completely disappear from the population. It may be that some birds recover, but still carry low levels of bacteria in their intestinal tract, and under certain conditions become more susceptible to developing the disease,’ said Roger.

‘Most Salmonellosis outbreaks end when the pine siskins return to their breeding grounds, typically late March or April.’

‘On their breeding grounds, pine siskins are more dispersed for breeding activities like nest building and raising chicks, so infection tends to be less common.’

Salmonella: A bacteria that can cause diarrhea, stomach cramps and fever

Salmonella are a group of bacteria that infect the gut.

They live in animal and human intestines and are shed through feces.

Humans become infected most frequently through contaminated water or food. Contamination is possible if raw and cooked foods are stored together.

Symptoms of salmonella infections include diarrhea, stomach cramps and sometimes vomiting and fever.

On average, it takes from 12 to 72 hours for the symptoms to develop after swallowing an infectious dose of salmonella.

They usually last for four to seven days and most people recover without treatment.

But if you become seriously ill, you may need hospital care because the dehydration caused by the illness can be life-threatening.