More than half of all homes sold in San Francisco in 2018 were bought by software tycoons, according to a report published Friday in The Atlantic.

Some 51 percent of home-buyers in the city worked at companies such as Google, Apple and LinkedIn.

According to Deniz Kahramaner, a data scientist turned real-estate agent, most of the buyers purchased houses and apartments in neighborhoods closer to freeways and trains that head into Silicon Valley.

However, this is sending home prices soaring to stratospheric levels and causing homelessness and inequality to balloon. This in turn creates a tale-of-two-cites between the tech employees and middle-class workers.

Software employees make up the largest share of home buyers in San Francisco at 51%.  Rounding out the top five are workers are finance, biotechnology, real estate and healthcare companies

The second largest group of buyers  – finance employees – come it at a measly nine percent.

Rounding out the top five are employees of biotechnology, real estate and healthcare companies.

The data scientist also looked at the number of buyers in tech companies in San Francisco in 2018, and found – perhaps unsurprisingly – Google in the number one spot with 64 buyers and Apple not far behind with 43 buyers.

Making up the top five were Facebook, LinkedIn and Salesforce. The numbers of some other companies, such as Visa (four), Netflix (five) and Airbnb (six), look tiny by comparison.

Yet despite the recent buys, San Francisco does not have a lot of space when it comes to housing.

Meanwhile, the homelessness and income inequality that has long plagued The Golden City is likely to rise.

According to data complied by The New York Times, the median home price in San Francisco currently sits at $1.2million.

But in more inland neighborhoods, more than 50 miles away such as Rio Vista and Stockton, median home prices are around $260,000. 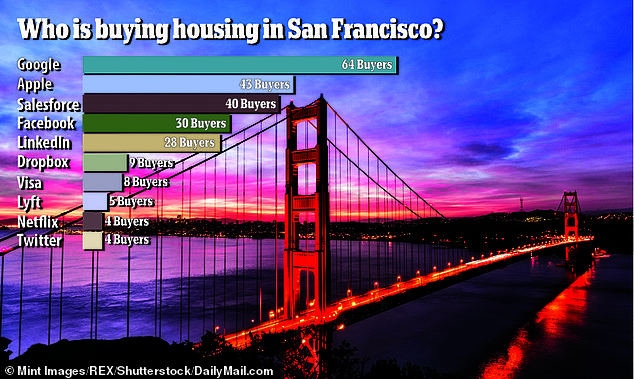 It means that those who can’t afford ritzy apartments and homes are forced to live in RV encampments or move multiple cities away.

Additionally, the Department of Housing and Urban Development estimates that of the more than 553,000 homeless Americans, about 1.25 percent, are in San Francisco, reported Curbed SF.

Although that doesn’t seem like a high number, it’s actually one of the worst rates in the country.

Experts told The Atlantic this disparity could get worse: initial public offerings.

Lyft and Pinterest just became public companies and are soon expected to be joined by Airbnb, Instacart, Palantir, Postmates, Slack and Uber.

A study released in February 2019, led by UCLA’s Anderson School of Management, looked at how IPOs affected local housing prices.

Researchers found that home prices no more than 10 miles from that company’s headquarters rose by nearly two percent before and when that company became public.

Kahramaner told The Atlantic that in this new IPO cycle, there will be at least 5,000 new buyers that enter the housing market, with roughly 1,000 trying to buy homes in San Francisco for at least $3million.