More than 600,000 have signed a petition demanding the government give hazard pay to all of its USPS workers continuing to brave the outside during the coronavirus lockdown.

It comes as 19 postal workers have died of coronavirus, while 500 have tested positive and another 6,000 have had to self-isolate, USPS leaders told Congress last week.

The petition claims that USPS staff have not been given adequate protective equipment as they work 12-hour overtime shifts, packing and loading potentially contaminated packages and letters.

‘As of this present time, there have been upwards of more than 40 confirmed cases of coronavirus within the United States Postal Service,’ the Change.org petition written on March 16 says. 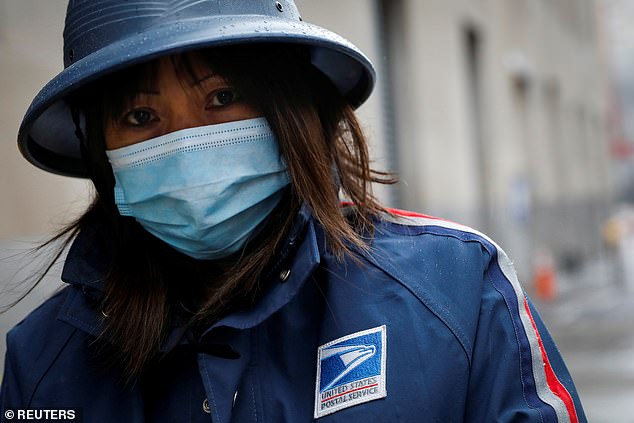 ‘Megan Brennan USPS CEO hasn’t sent any supplies such as had sanitizer or mask for employees protection, she made a very vague statement which basically read her employees should follow CDC guidelines.’

A spokesman for USPS said that the petition was exceedingly outdated and much had changed at the agency since it was written.

USPS employs some 600,000 staff and last Thursday Brennan asked lawmakers for another $50 billion in addition to a $10 billion loan already sanctioned by Congress last month.

‘We are at a critical juncture in the life of the Postal Service,’ Brennan told The Washington Post. ‘At a time when America needs the Postal Service more than ever, the reason we are so needed is having a devastating effect on our business.’ 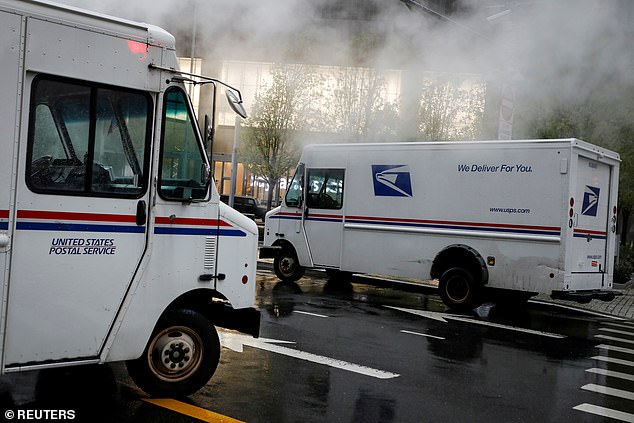 USPS trucks are seen parked in rain in Manhattan during the outbreak of the coronavirus disease (COVID-19) in New York City, New York 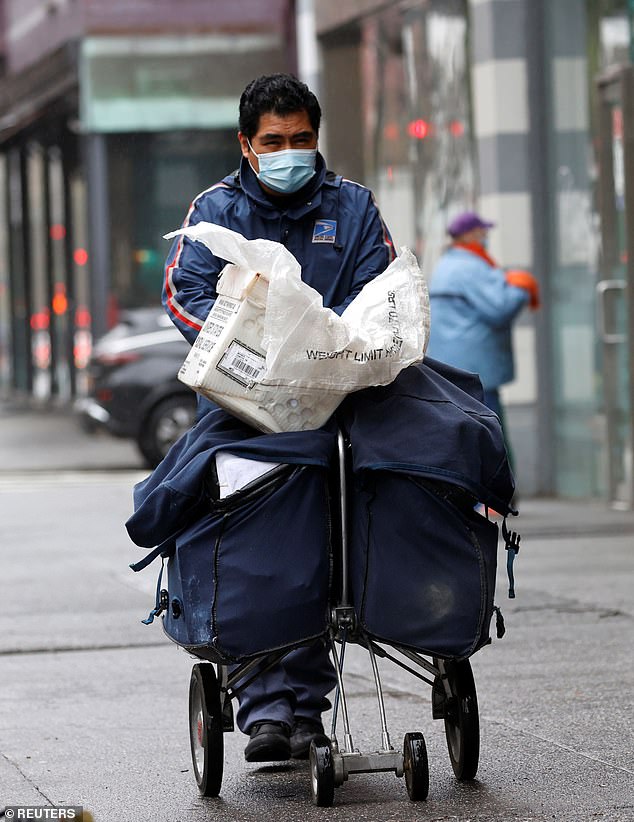 It comes after staff at delivery titans UPS and FedEx said they were being kept in the dark about COVID-19 cases among their colleagues despite the deaths of three workers in a week.

Two dozen employees spoke with NBC Tuesday, accusing bosses of a ‘frustrating lack of communication with front-line employees’ that has caused widespread ‘fear and anxiety’ in the workforce.

UPS and FedEx are America’s two largest corporate delivery companies, employing a combined total of 600,000 people. A large majority of employees are deemed ‘essential workers’, meaning that they continue to perform their duties despite the current pandemic.

However, both companies have confirmed that they have employees who have passed away from COVID-19. 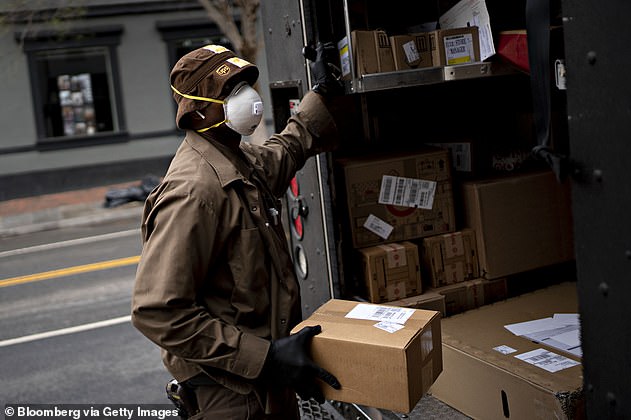 Staff at UPS and FedEx say they’re being left in the dark about cases of COVID-19 at their companies, despite the deaths of three delivery workers in the space of a week. A UPS employee is pictured in Washington DC last week 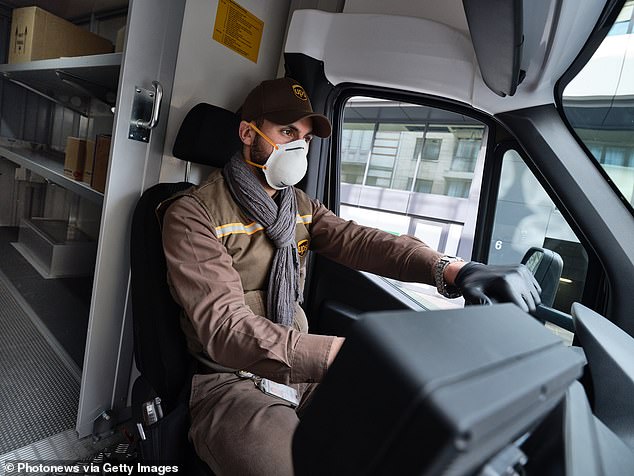 Last week, FedEx announced that one of its company pilots, 32-year-old Paul Fox, had died from the virus. UPS also acknowledged that two employees at their Worldport facility in Louisville, Kentucky had also succumbed to the disease.

Long-time UPS worker Roml Ellis, 55, passed away on April 4. The company confirmed that a second employee from the facility died April 10.

The deaths have rattled co-workers at Worldport, who say they learned of Ellis’ death from TV news.

‘It was all hush-hush. The only reason we got the full details was because it was reported on the local news station,’ one stated.

‘How are any of us supposed to get ahead of a virus when we don’t even know who’s sick?’ another frustrated UPS worker added. 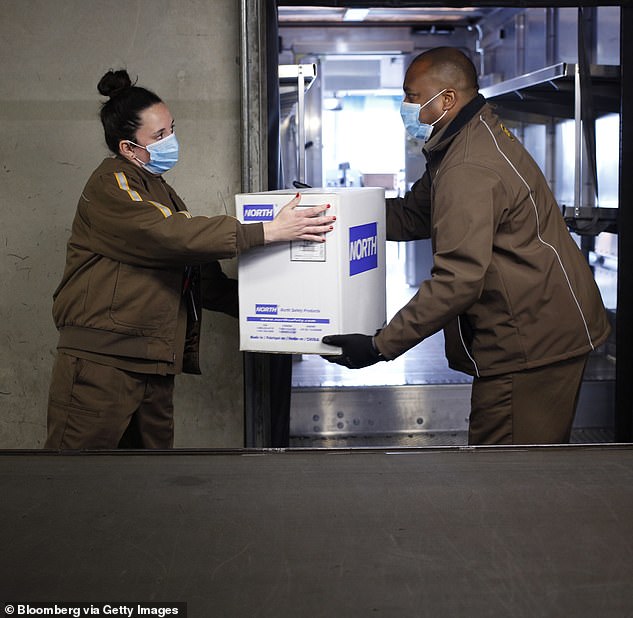 Workers wear protective masks while loading boxes onto a delivery truck at  the UPS ground sorting facility in Louisville, Kentucky last week. Two employees at the facility have died from COVID-19 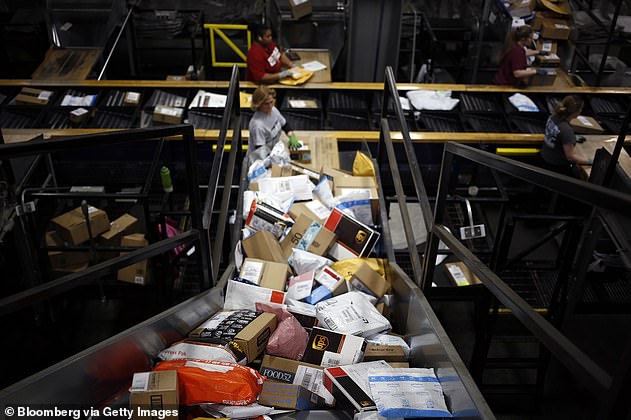 Employees are pictured sorting packages at the UPS Worldport facility. Workers at Worldport say they were only provided with masks after their colleague passed away. They also allege that areas of their sprawling facility are ‘not disinfected consistently’

The workers claim they repeatedly asked bosses about their sick co-workers, but management refused to provide any details citing ‘privacy concerns’.

However, staff at Worldport say they need to know basic details for their own health and safety.

‘We don’t want to know people’s names, but we do want to know if we were working in direct contact with somebody who’s contagious,’ one told NBC.

‘All we get from the supervisors is ‘the only thing we know is what management tells us.’

Workers at Worldport say they were only provided with masks after Ellis passed away. They also allege that areas of their sprawling facility are ‘not disinfected consistently’.

Meanwhile, FedEx and UPS employees are ‘still working in close proximity to one another’ ‘in the bellies of planes, in delivery trucks and in warehouses’. 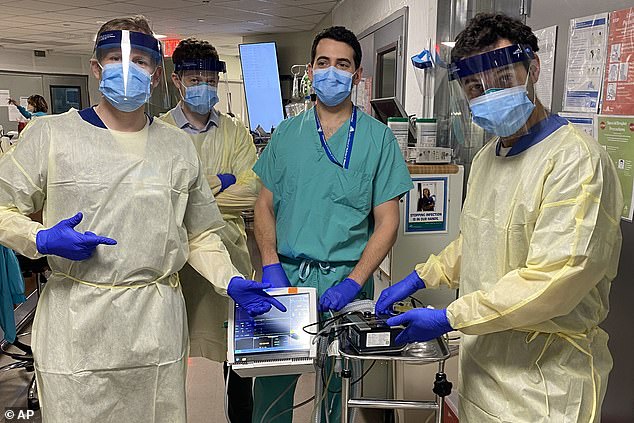 The NBC report comes as the coronavirus pandemic worsens across much of the United States. Medical workers are pictured at Mount Sinai hospital in New York as they battle the outbreak

On April 9, it was reported that  16 FedEx pilots have tested positive for COVID-19. The company told NBC it has employees who have been diagnosed ‘across the enterprise’, but would not disclose the number.

Similarly, UPS would not tell the news network how many of its workers had tested positive to the virus.

DailyMail.com has reached out to both delivery companies for comment.

In a statement, UPS told DailyMail.com: ‘UPS is saddened by the loss of our employees at Worldport, and we extend our deepest condolences to their families and friends.’

‘When UPS learns of a COVID-19 positive case, we inform co-workers in their immediate work area that a case exists, without disclosing the individual identity of the ill employee due to healthcare privacy concerns.

‘We are disclosing the incidents to co-workers who need to know because of their potential contact with the ill employee, however we do not communicate site-wide those instances of a diagnosis, as this is beyond the scope of guidance provided by public health officials.’

The NBC report comes as the coronavirus pandemic worsens across much of the United States. More than 600,000 Americans have tested positive to the disease, and 25,000 have died. 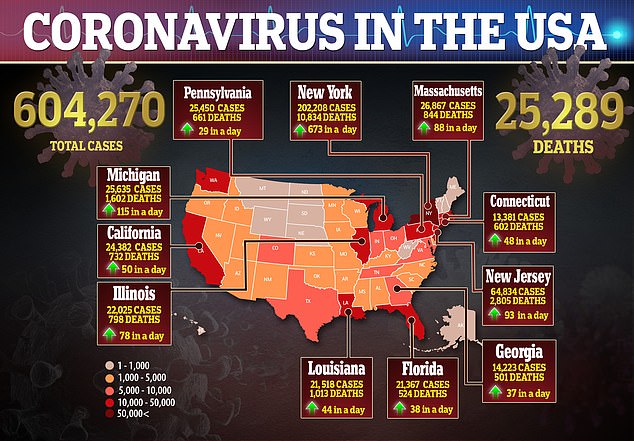