More than eight in 10 people aged 40 and above in England have now had at least one dose of Covid vaccine, latest official figures show.

NHS England data released yesterday revealed that, across the whole country, 83 per cent of adults in the age group had at least one jab by May 9.

In nearly 50 areas coverage was 90 per cent or higher but MailOnline analysis shows vaccination rates vary wildly across the country.

Uptake is as low as 57.7 per cent in two boroughs in London – Westminster and Kensington and Chelsea, which have both seen the some of the lowest vaccination rates in the country throughout the roll-out.

The success of the rollout had led to calls for lockdown-easing plans to be accelerated. But Boris Johnson has refused to rule out extending measures due to rapidly increasing cases of the Indian variant.

The PM admitted yesterday he was ‘anxious’ about its spread and will ‘rule nothing out’ in his efforts to contain it.

Scientists believe it could be as, or more, transmissible than the Kent strain that triggered the second wave in the UK – but they are confident the jabs will protect against it.  Ministers today boosted the roll-out of second doses of vaccines for ten million Britons across the UK in an effort to protect them in the event there is a third wave.

Public Health England figures showed yesterday cases of the mutant strain had more than doubled in a week, rising from 520 confirmed infections to 1,313. But these figures lag at least a week behind the spread of the virus, because it takes time to sequence every case, suggesting the current outbreak may be larger.

Government ministers last night shut down plans by local health officials in Blackburn and Darwen to offer vaccines to all residents aged over 18 amid rising Indian variant cases in the area. NHS sources said officials must stick to the aged-centred priority list designed by JCVI top scientists.

It comes as Britain today recorded another 2,193 cases of Covid, down a tenth on the same time last week, while another 17 deaths were recorded. For comparison, hundreds were dying from the virus every day in the darkest days of January.

More than 90 per cent of people aged 40 or above have had their first vaccine dose in 44 areas of England, NHS data analysed by MailOnline show 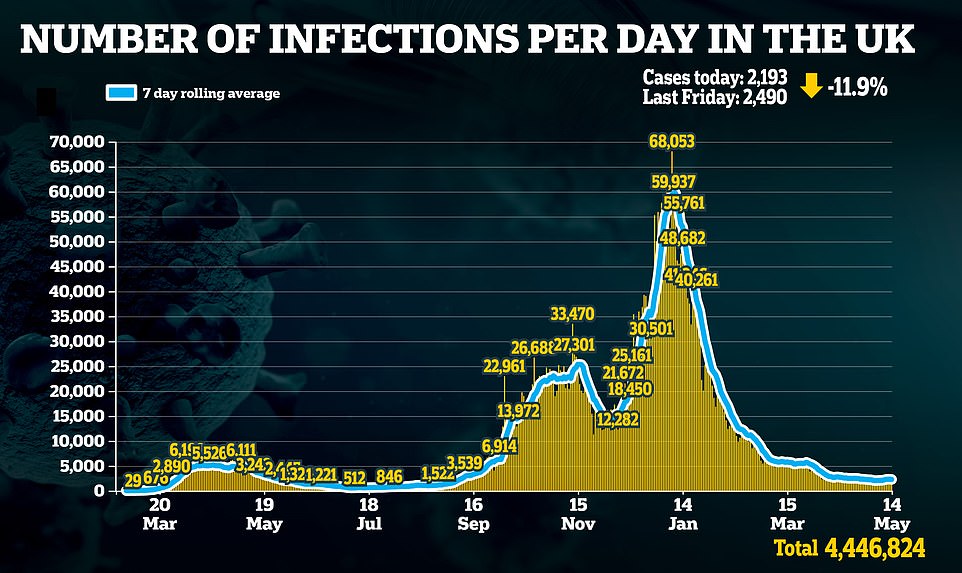 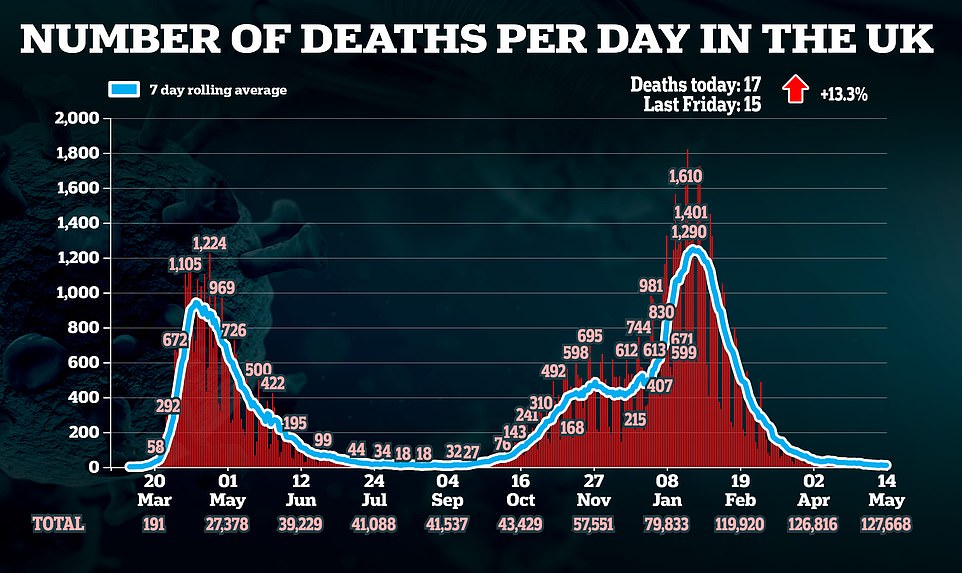 BOTTOM 10 AREAS IN ENGLAND FOR VACCINE UPTAKE IN OVER-40s

TOP 10 AREAS IN ENGLAND FOR VACCINE UPTAKE IN OVER-40s

The vaccine roll-out was extended to over-40s on April 30 and the vast majority will have now had the opportunity to book an appointment at their local vaccination centre or GP.

Ministers have grown concerned about vaccine inequalities arising because of hesitancy in particular social groups, including the BAME community.

More than 35.9million Britons – or two in three adults – have already received at least one dose of the Covid vaccine and 18.8million have got their second dose.

England’s roll-out was extended to under-40s for the first time earlier this week, with around a million adults in this group now being invited for their jabs.

Ten million people could have their second dose of a coronavirus vaccine brought forward as the Government tries to slow the spread of the Indian variant.

Ministers last night approved plans aimed at slowing the spread of the imported strain of Covid-19, after cases doubled in a week.

Older people living in areas of high infection are also to be offered their second dose of the vaccine early to protect them.

It means a total of ten million people who are considered to be most vulnerable could have their second doses of the vaccine brought forward to prevent them getting hospitalised if Britain faces a third wave, The Times reported.

So far, most people aged over 65 have had both doses, but only around a quarter of people in their 50s have – leaving more than six million people in this group still without full protection.

Prime Minister Boris Johnson said yesterday he was ‘anxious’ about the 100 per cent increase in cases in some areas, as the national infection rate started to also creep back up.

The Joint Committee on Vaccination and Immunisation (JCVI) has also been asked to examine the case for ‘targeted vaccinations’ of all over-17s in the worst-hit areas.

Surge testing for the new coronavirus variant will also be deployed in areas where it is spreading rapidly. Boris Johnson said he was ‘anxious’ about the variant and refused to rule out local lockdowns to help try to contain it.

Government sources also played down the risk that outbreaks of the ‘variant of concern’ could derail the plans to lift the lockdown on June 21 – as some scientists called for the lifting to be postponed.

Mr Johnson’s former chief adviser Dominic Cummings also shared on social media warnings by scientists that the roadmap out of lockdown should be delayed.

The new variant spreads at an alarming rate, with Public Health England last night revealing that cases in the UK had more than doubled from 520 to 1,313 in a week.

But a source said there was no evidence so far that current vaccines would fail to protect against serious disease and death. ‘If it is just spreading quicker, that is no reason to change course,’ the source said.

‘The important thing is that we do not see a rise in hospitalisations and deaths. But we have to be cautious because we just do not know enough about this variant.’

On the back of the figures, Director of Public Health in Kensington and Chelsea — the area with the lowest uptake among over-40s — Anna Raleigh, encouraged people to come forward for their jab.

The council announced calls to support residents who either do not know they can have a jab, cannot get to the centre or have questions making them hesitant.

She said: ‘It is vital that people get vaccinated to protect themselves, family and friends. We have seen tremendous numbers of people over 70 getting vaccinated and we want to ensure the same for younger age groups.

‘Our hub staff help people overcome practical barriers such as transport to a NHS vaccination centre or booking the vaccine online. They can also answer questions about the vaccine so people can make informed decisions.

‘No one will be forced to get their jab, this is about support and reassurance.’

MailOnline’s analysis shows Covid vaccine uptake among over-40s is lowest in London, with the top 17 areas with the worst vaccination rates located in the capital.

The picture was much the same when looking at second dose uptake for over-50s, with just 27,209 out of 88,202 people in the age group now fully vaccinated in Newham (30.9 per cent) — the lowest in the country.

In hotspot areas for the Indian variant vaccine uptake was around 80 per cent for first doses among the over-40s, in a sign the roll-out was steaming ahead in these areas.

Bolton, which also has the highest infection rate in the country and is grappling with surging Indian variant cases, had an uptake of 81 per cent for first doses among the over-40s.

In other Indian variant hotspots, the figure was 85 per cent in Sefton, Bedford 81 per cent, South Northants 88 per cent and Blackburn with Darwen 78 per cent.

Boris Johnson has admitted he is ‘anxious’ about the spread of the Indian variant. The Government has not ruled out local and regional measures to contain outbreaks of the virus.

PHE has said there is no reason to panic just yet because early studies show the vaccines work against the mutant variant. They also pointed out Covid hospitalisations are still falling nationwide, which they point out is a sign the vaccines are working.

Fears have been raised that the variant could derail plans for lockdown-easing on June 21, but these fears have been downplayed by Government sources. They added surge testing will also be deployed to hotspot areas.

Mr Johnson’s former chief adviser Dominic Cummings also shared on social media warnings by scientists that the roadmap out of the national shutdown should be delayed. 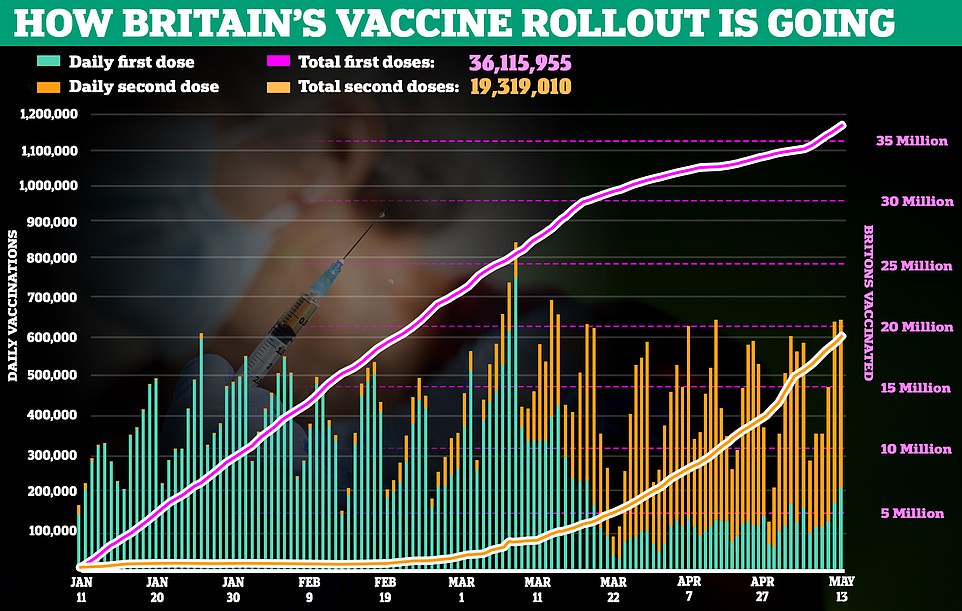 Britain is aiming to hit ‘herd immunity’ against the virus using vaccines – when it can no longer spread in the community because enough people have antibodies against the disease. Some experts have suggested this level is around 65 per cent, but others say it could be as high as 80 per cent.

Clinical studies showed the jabs are 100 per cent effective at blocking severe disease and death due to the virus, but only block infections in at least 70 per cent of cases.

ZOE Covid Symptom study data published yesterday revealed that people who caught the virus after being vaccinated experienced a much more mild version of the disease. Less than half suffered at least one of the ‘classic’ symptoms of the disease. An expert behind the study said jabs had ‘changed the game’.