A Morris dancer has sparked fierced debate on social media by claiming his troupe’s ‘blackface’ tradition is not racist.

Katie Kedward, 28, from Leeds, was on a walking tour in the Dales when she chanced upon the Morris dancers taking part in the four-day festival in the town of Settle.

Among the dancing group was John Ellis, who today told This Morning that the tradition predates ‘blacking up’ to ridicule black people.

‘It has no connection with all the things it’s being associate with – the minstrels, all that stuff,’ he said. ‘It’s purely a form of disguise.’

He said it dates back to a time when people would disguise themselves from their landlords while working outside at night in a bid to avoid raised rents.

Mr Ellis (left), who did not appear wearing blackface on This Morning, defended the tradition in his debate with Katie Kedward (right) 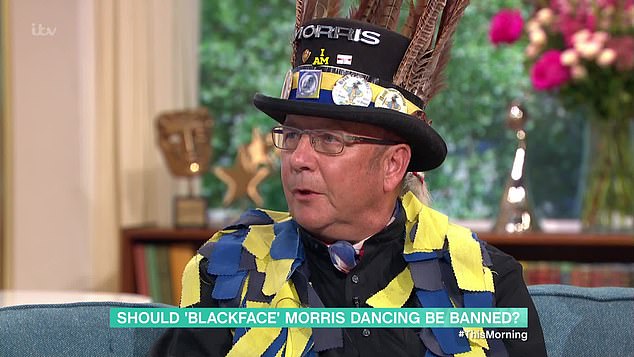 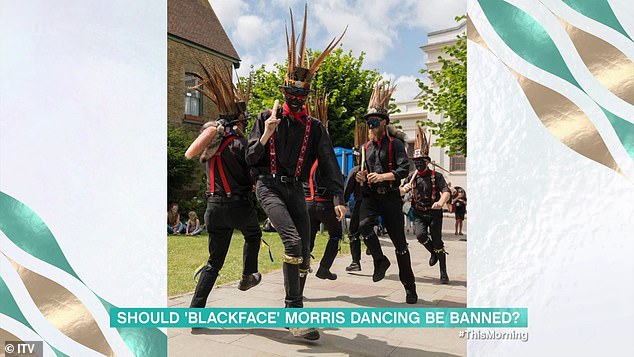 ‘It’s integral to our ethos,’ he told the show. ‘We’re not going out to mock anybody or be in anyway racially abusive.’

His remarks sparked a backlash on social media as some people suggested he didn’t understand the impact of what he was doing by painting his face black. 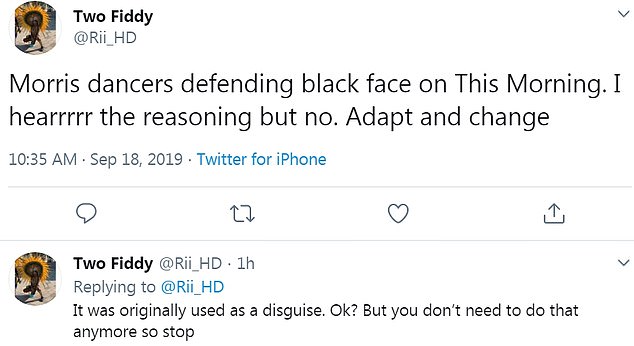 Ms Kedward said that, due to cultural phenomena including the Black and White Minstrel Show, the act of blacking your face has taken on sinister connotations.

‘We really have to think about broader cult context that blackface has attached to it,’ she said. 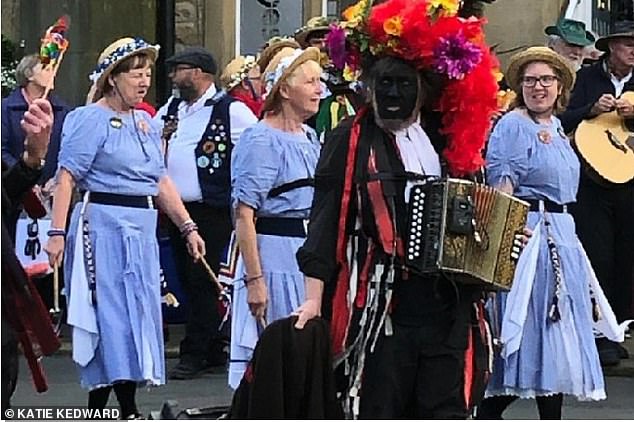 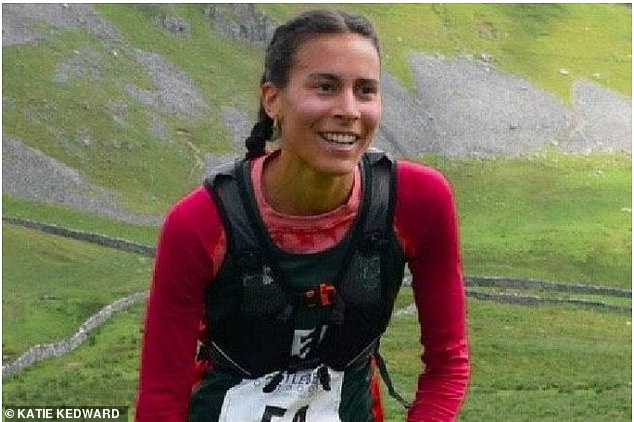 Katie Kedward, 28, from Leeds, was on a walking tour in the Dales when she chanced upon the Morris dancers taking part in the four-day festival in the town of Settle

She acknowledged that there was ‘no racist intent’ with Mr Ellis and his West Yorkshire group.

What are the origins of ‘blackface’?

The origins of Morris dancers blacking their faces and the reasons for doing so are disputed.

Think tank the Runnymede Trust also says the tradition of blackface as a disguise was linked to north African immigration to England.

Others claim that the tradition in dance troupes predates racist minstrel shows.

However, she added: ‘It’s really important to understand that blackface has this really long history to mock and parody black people.

‘For people of colour who are still battling these stereotypes today encountering blackface it’s impossible to separate it from that.’

It comes after she said on Tuesday that, as a person of colour, the performance in Settle left her uncomfortable and she reported the troupe to the town’s Mayor.

Mayor Dan Balsamini, has joined the protests after shoppers saw the Morris men and women prancing in the market square with their faces dyed black.

Ms Kedward said: ‘I felt uncomfortable in the atmosphere.

‘The longer I stayed, the more uncomfortable I felt.

‘I felt that people were looking at me as a person of colour, and then looking at the people in blackface and trying to see my reaction.

‘It was not something I thought I would ever see in England nowadays.

‘I thought it was pretty universally accepted that blackface is controversial and offensive. I was quite shocked.’