Mortgage brokers are training as mental health first aiders so they are in the best position to help clients in vulnerable circumstances as the UK heads into a recession.

Gary Boakes, director at Verve Financial in Salisbury says that doing the first aider course was something that the firm felt was important, not only for them as business owners but to give the best care to customers.

It is not alone. Elliot Cotterell, director at Windsor Hill Mortgages, says he is also undertaking mental health training, and Paul Neal, mortgage and equity release specialist at Missing Element Mortgage Services, based in Belper in the Peak District, is already a mental health first aider.

It comes as the Office for National Statistics released data this week detailing the link between the ongoing cost of living crisis and depression in adults.

‘As brokers, we do find ourselves being part-broker part-counsellor at times,’ says Neal.

According to the ONS data, more than one in four (27 per cent) adults who reported difficulty in affording their rent or mortgage payments had moderate to severe depressive symptoms.

The figure is almost twice as high as those who reported that it was easy to pay for their housing (15 per cent).

Among adults with moderate to severe depressive symptoms, 97 per cent reported that the cost of living was an issue for them.

And housing wasn’t the only cause for concern. A similar proportion (24 per cent) of those who reported difficulty paying their energy bills experienced moderate to severe depressive symptoms, which is nearly three times higher than those who found it easy to pay their energy bills (9 per cent).

‘While I have to be very clear that I’m not a counsellor and my main objective is to give my clients solid advice on their finances, you can’t ignore the fact that finances and mental health are so intertwined.’ 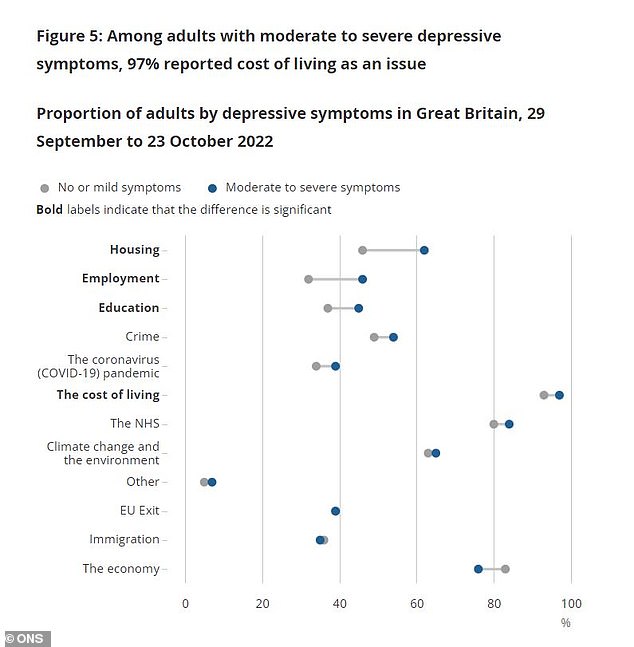 The rising cost of mortgages will have been at the forefront of many homeowners minds as rates have shot up over the past few months.

Half of UK homeowners are on a fixed rate mortgage ending within the next two years, creating the risk of a market-wide mortgage shock.

The Financial Conduct Authority has recently issued guidance for firms supporting mortgage borrowers impacted by the rising cost of living.

It provides information on issues such as the implications of contract variations – when homeowners change the terms of their mortgage temporarily, often due to affordability issues – and interest rate switches.

Mortgage rates hit historic lows in summer 2021 as multiple high street lenders offered loans for below 1 per cent interest – and those who took these cheap rates on two-year fixes will be coming up for remortgage in summer 2023.

According to the latest estimates, the typical mortgage rate by then will charge up to 5 per cent – potentially adding hundreds of pounds per month to the cost of their mortgage.

At the same time the cost of living crisis is heaping additional pressure on household finances as food and energy bills have rapidly increased in price.

As such, more than a quarter of mortgage holders say they wouldn’t be able to afford their monthly repayments if they increased by £100 a month, according to research from Citizens Advice. 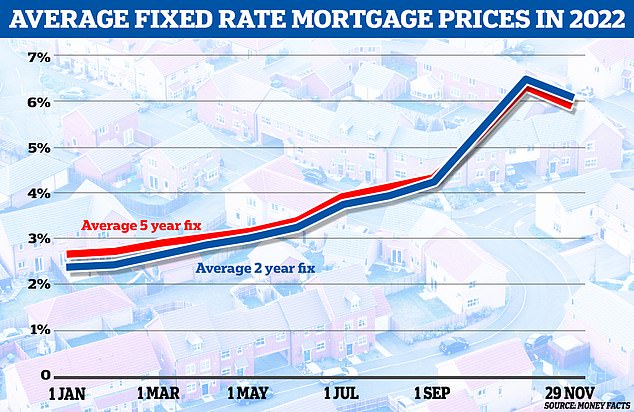 Mortgages rates are slowly falling following the highs seen in October after the mini-Budget, but remain much higher than they were at the beginning of 2022

Nearly half (45 per cent) said they would be unable to make their payments if they rose by £250 a month.

And the situation is already precarious. Mortgage arrears reached a 12-year high of £2.05 billion at the end of the first quarter of 2022, the highest figure since June 2010 when arrears touched £2.09 billion, according to data from the Bank of England and the Financial Conduct Authority.

While homeowners should continue to make their mortgage payments at their current level if at all possible, the unprecedented nature of the current rate rises and inflation may mean some are no longer able to.

For anyone in this position the first move should be to contact their mortgage lender as soon as possible.

Once a lender is aware of the situation there are tools at their disposable to reduce mortgage cost, such as switching to interest only payments for a period of time, extending the length of the mortgage or granting a time limited mortgage holiday.

Borrowers who need to find a mortgage because their current fixed rate deal is coming to an end, or because they have agreed a house purchase, have been urged to act but not to panic.

Banks and building societies are still lending and mortgages are still on offer with applications being accepted.

Rates are changing rapidly, however, and there is no guarantee that deals will last and not be replaced with mortgages charging higher rates.