Santander and Barclays are the latest lenders to reduce their mortgage rates following similar moves from Halifax, Nationwide and The Mortgage Lender.

Santander’s rates today fell by up to 0.2 per cent across its product range.

Deals for new customers fell by 0.12 per cent on fixed rates and 0.15 per cent on selected tracker products.

Price war? More mortgage lenders are bringing down their fixed rate deals despite a looming base rate rise

Trackers follow the Bank of England’s base rate, plus or minus a certain percentage. Currently the base rate is 3.5 per cent but many expect it to rise to 4 per cent when the Monetary Policy Committee meets next month.

The increase would mean a rise in mortgage costs for those on a tracker product, despite them being cheaper on average than current market fixed rates.

Similarly, Barclays has reduced the rates on some of its product range. It now has a five-year fixed rate deal for borrowers with a 25 per cent deposit at 4.41 per cent – a reduction of 0.27 per cent.

Borrowers can check the rates they could apply for based on their home’s value and loan size with our best mortgage rates calculator.

The lender is also offering a two-year tracker deal for those with a 25 per cent deposit for 3.86 per cent, down from 3.99 per cent. It also offers exclusive rates for its Premier banking customers.

Mortgage rates rose rapidly at the end of last year, thanks to uncertain economic conditions in the UK and the fallout from the disastrous mini-Budget in September, but they are now slowly falling.

Interest on the average five-year fixed mortgage has dropped well below 6 per cent to 5.27 per cent according to MoneyFacts, as more lenders reduce their rates. The average two-year fixed rate is now 5.5 per cent.

But the best deals available now are heading towards 4 per cent, with rates as low as 4.18 per cent on a five-year fix for those with larger deposits.

>> Will we see mortgage rates back below 4% this year?

On a 10-year fix, the lowest rate available is currently 4.04 per cent with Halifax – though as with many of the cheapest deals, it comes with a large fee of £1,048.

David Hollingworth of mortgage broker L&C said: ‘The pace of change in mortgage rates has picked up but in contrast to last year we are now seeing rates cut, as the price war intensifies.

‘More stable and cheaper funding conditions are enabling lenders to improve rates and reverse some of the huge hikes that followed the mini-Budget.

‘Competition between lenders is likely to be fierce as they want to lend and will therefore need to offer attractive products. I expect that we will see the fixed rate cuts continue despite the potential for another base rate increase next week.’ 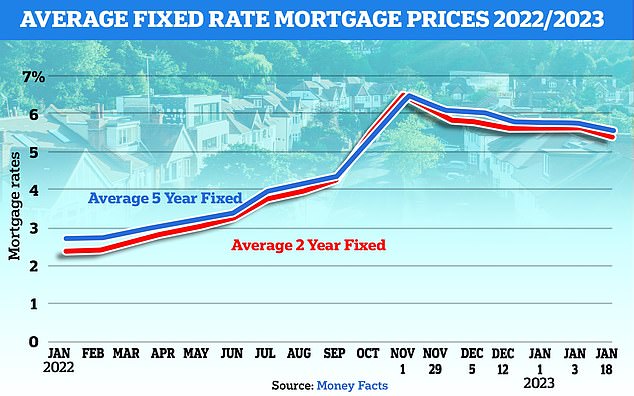 Ups and downs: Mortgage rates have gradually risen since the Bank of England began raising the base rate. They then spiked after the mini-Budget, but are now slowly reducing

On its transfer rate products, for existing customers that need to remortgage on to a new deal, Santander has cut all fixed rates for those with deposits of 15 per cent or more by between 0.05 per cent and 0.12 per cent. It has also reduced all two-year trackers by 0.2 per cent.

Lewis Shaw, owner at broker Riverside Mortgages, said ‘As predicted, the price war that started with Halifax and Nationwide reducing rates has begun to work through other mortgage lenders, all competing for good-quality borrowers.’

Shaw added: ‘This is great news for aspiring homebuyers who, only a few months ago, felt like they’d had the prospect of buying their first property taken away from them. This is the news we all need after months of doom and gloom.’