Mortgage rates may be bottoming out as 5-year fix falls to 1.19%

Experts are predicting a ‘bottoming out’ of the mortgage market after interest rates hit record lows this week.

Average mortgage rates for borrowers with deposits of at least 40 per cent dropped to the lowest on record in May, according to analysis of new figures from the Bank of England by Knight Frank Finance.

Average two-year fixed rates at 60 per cent loan-to-value dropped to 1.20 per cent, compared to 1.32 per cent a year earlier.

Bottoming out? Mortgage rates have hit record lows, but could be set to rise

When the Bank of England started tracking this data in 2012, the figure was 2.76 per cent.

The extremely low cost of mortgage borrowing has helped to fuel the ongoing housing boom in the UK since the housing market reopened after the pandemic.

‘Buyers’ insatiable appetite to move home has meant the value of new mortgages started the year at highs not seen since before the 2008/09 financial crash,’ said Paul Stockwell, chief commercial Officer at Gatehouse Bank.

‘There has been frenzied activity in the market, with movers searching for larger homes and more outdoor space, while the extension of the stamp duty discount to the end of June added more fuel to the fire in the first quarter of this year.’

This was reflected in the Bank of England data, which showed that mortgage lending commitments were 15 per cent higher in the first three months of 2021, than in the same period last year.

However, some mortgage market experts are claiming interest rates are unlikely to go any lower, and that borrowers are soon to see the tide turn in the form of rate increases.

‘Borrowers have never had it so good’

‘Mortgage rates at 1.2 per cent almost certainly represent what will be the cheapest point of this cycle,’ says Simon Gammon, managing partner at Knight Frank Finance.

‘Borrowers have never had it so good, and ultra-low mortgage rates are a significant reason why house prices are climbing at their fastest pace since 2014.

‘However, with the economy roaring back to life and inflation picking up, we’re already seeing some big lenders notch up the price of their products in anticipation that interest rates will begin to rise.

‘This will be a gradual process, but the path of the cost of the mortgages will be upwards from this point onwards.’

Also this week, data published by financial information firm Defaqto showed that lenders were offering historically low rates on 5-year fixed products for those with 40 per cent deposits.

It said that the current best buy was the Barclays 5-year fixed at 1.19 per cent, which was the lowest rate on the market for at least 12 years.

Until a few months ago, the best comparable rate being offered was 1.28 per cent, Defaqto said.

Katie Brain, consumer expert at Defaqto, said the low rates showed that lenders were finally passing on the benefits of the extremely low 0.1 per cent base rate to customers.

‘We haven’t seen rates this low for a very long time and it is great news for anyone looking to re-mortgage,’ she said.

‘While the Bank of England kept interest rates low throughout the pandemic, we have not seen this passed on to borrowers like this until now.’

‘These rates are very attractive if you know you are going to stay in your property for the next 5 years and can lock into a fixed rate,’ she said.

However, Brain said that there could be further rate decreases across lower loan-to-value products, suggesting that the market may not have hit bottom just yet.

‘Although these products are primarily designed for those looking to re-mortgage, hopefully it is an indication of where mortgage lending is heading and we may see rates being lowered across the board,’ she added.

While the higher-deposit market, driven by remortgages, remains very affordable, rates at the other end of the scale are not hitting the same record lows.

Rates on 5 per cent deposit mortgages, for example, are more than 4 per cent in some cases. 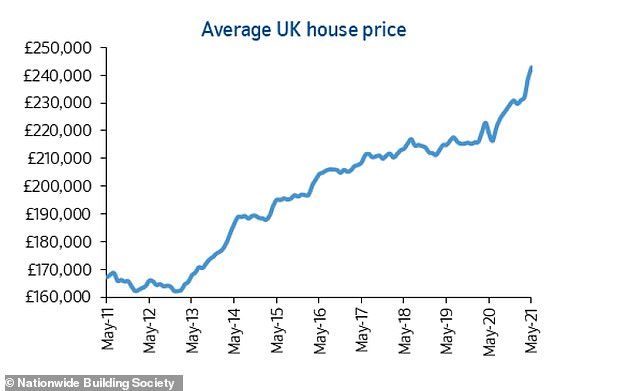 House prices have soared by 10.9 per cent over the past year, according to Nationwide’s index

Whether rates will go up overall depends to a large extent on inflation, so it is difficult to predict when this will happen.

‘Mortgage rates are at historically low levels and there is a general consensus that rates will go up when inflation returns,’ said Marc Goldberg, head of sales at estate agent Marsh & Parsons.

‘Whilst I suspect that rates have bottomed out, there are so many variables and you can’t say anything for certain at present.’

If mortgage borrowing does become more expensive, it could help to slow down the runaway house price rises witnessed in the past year.

The latest estimates show increases of around £30,000 on average.

‘It is inevitable that with any significant increases in mortgage rates this will put the brakes on house price inflation’, Goldberg added. ‘Although we are not expecting any dramatic changes this year with so much uncertainty clouding the backdrop.’

If there are any rate increases, they are likely to be small and gradual.

‘We believe rates will remain steadfastly low, with very small increases over the next few years allowing the long-term changes driven by the pandemic to continue to fuel market demand for some time,’ said Stuart Law, CEO of property business the Assetz Group.

With so much uncertainty in the market, the movement of mortgage rates is difficult to call. So what is the advice for borrowers?

Sam Le Pard, co-founder of LEXI Finance, an advisory firm to residential developers, reminds those looking to buy or remortgage their home that, even if rates go up, they will probably still be very low in a historic context.

‘We’ve seen market commentators try to call ‘bottom’ before, only for it to fall further, so it’s hard to say definitively,’ he says.

‘But, if you compare current mortgage pricing with long term trends these are incredibly low prices, it’s a good time to borrow.’