Most Beautiful Girl in the World Thylane Blondeau at NYFW

The little girl once labeled the ‘most beautiful girl in the world’ is finally old enough to join the fashion world as a grown-up.

Thylane Blondeau, a French model who stirred controversy after posing in a ‘sexualized’ shoot for Vogue Paris at age 10, is now 16 years old and scoring invitations to New York Fashion Week.

On Wednesday, she even sat front row at the celebrity-packed Michael Kors show, where she wore a shimmering animal-print top and moss-green pants. 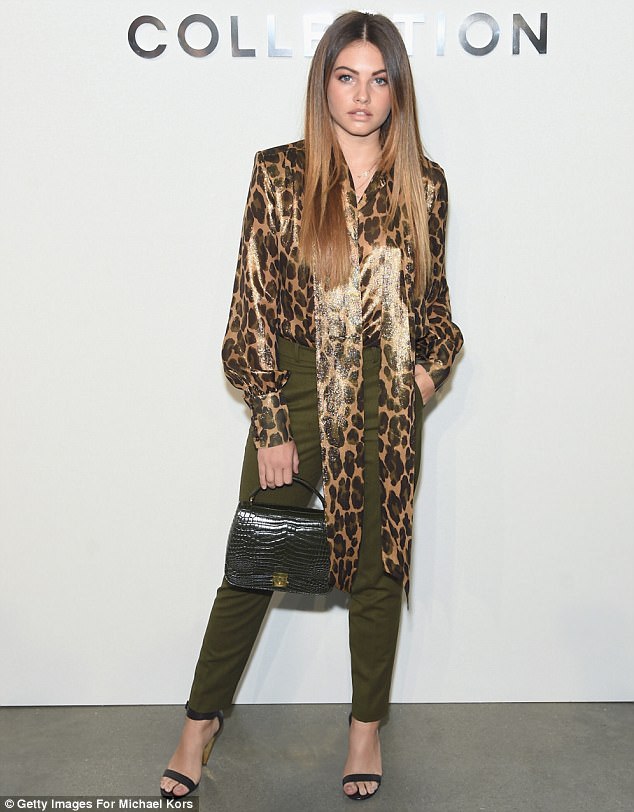 She’s a natural: The teenager, who is from France, looked totally confident in the spotlight 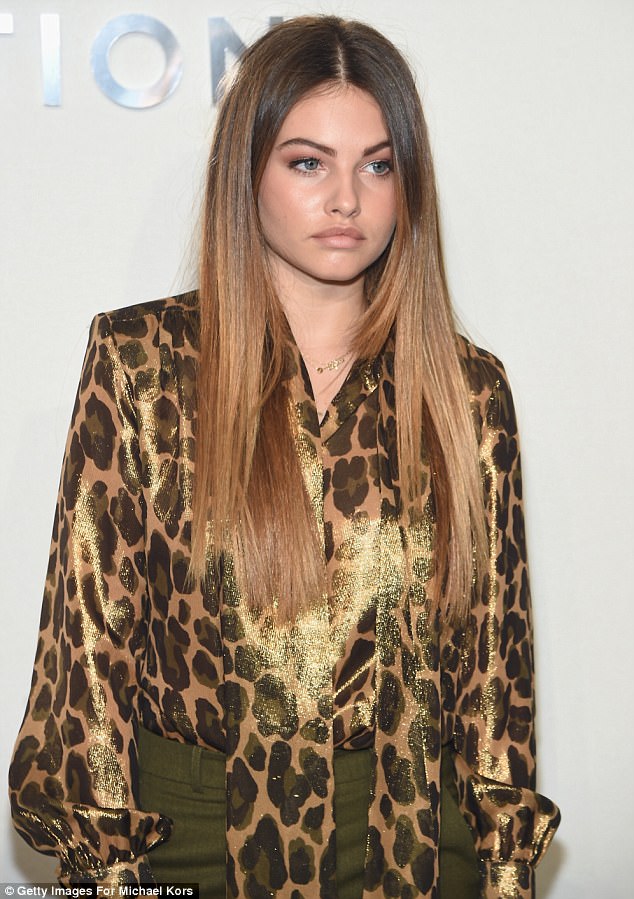 Say cheese! The 16-year-old wore a shimmery animal-print top and pouted for the camera 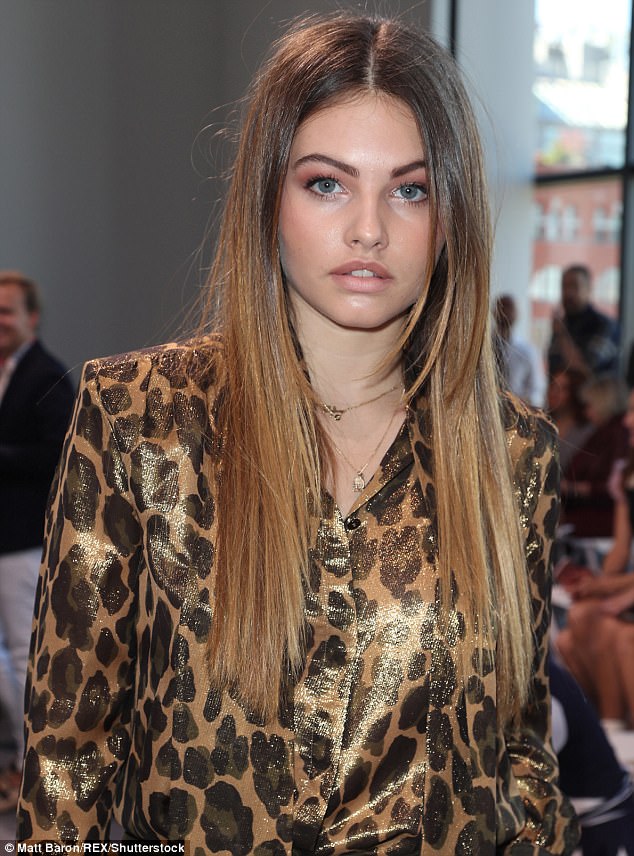 Shining bright: Thylane looked every inch the style star as she posed and pouted for the cameras before taking her seat at the show

Flashback: She became famous as a little girl when she was labeled the ‘most beautiful girl in the world’

Thylane put on her best pouty face to pose for pictures at the event. She wore her ombre hair straight around her shoulders, and her dewy skin appeared to have been expertly made up with bronzer and blush.

She sat beside BFF Gabriel-Kane Day Lewis and Camila Morrone in her front row seat, while other stars including Nicole Kidman, Naomi Watts, and Catherine Zeta-Jones sat nearby.

Thylane, who is the daughter of soccer star Patrick Blondeau, first made headlines as a little girl. When she was just four years old, she walked the runway for Jean Paul Gaultier.

Then, when she was six, she covered Vogue Enfants — a supplement that ran in Vogue Paris and featured children’s clothing. That’s when the media began to call her the ‘most beautiful girl in the world’. 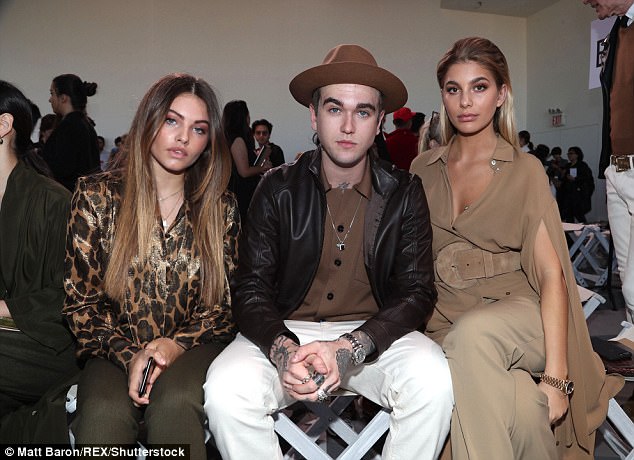 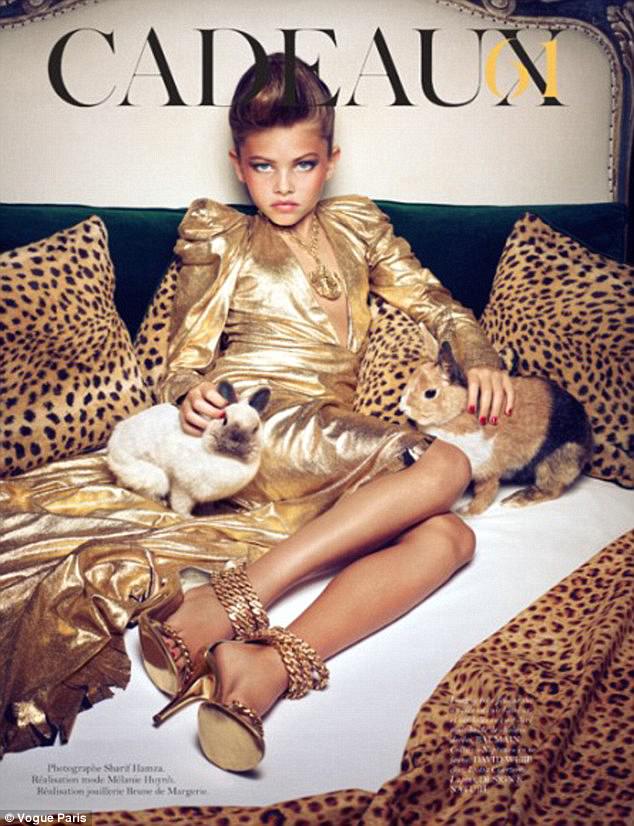 High-fash: A Vogue Paris shoot that took place when she was 10 stirred up some controversy 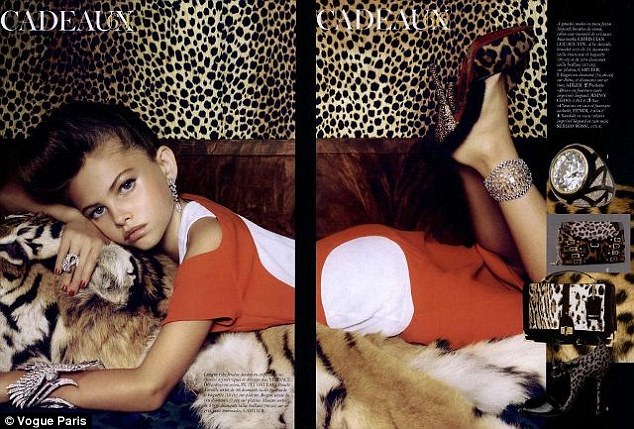 Dress-up: Many cried that the little girl was being sexualized 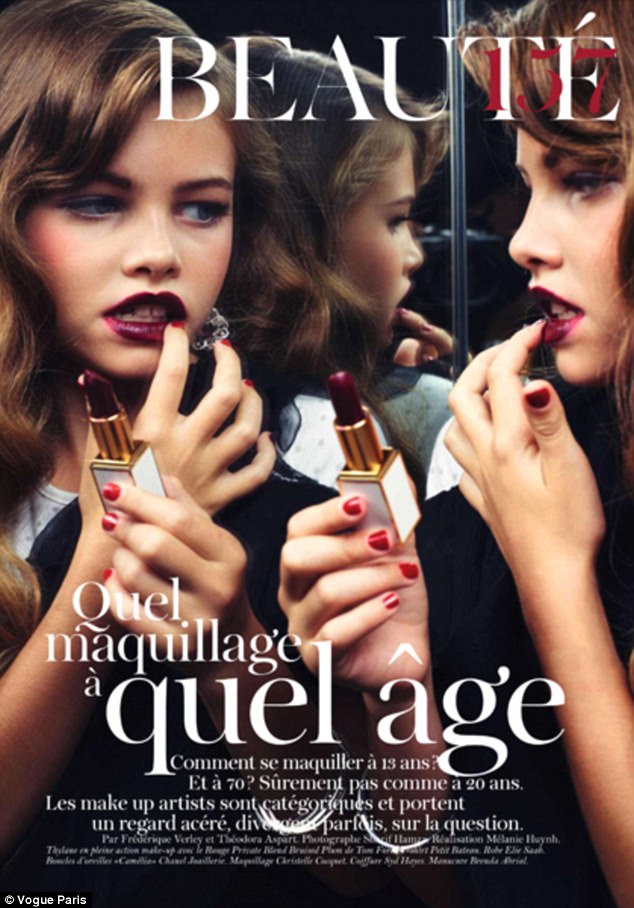 The big time: She grew up modeling and is now signed to IMG and has a deal with L’Oréal 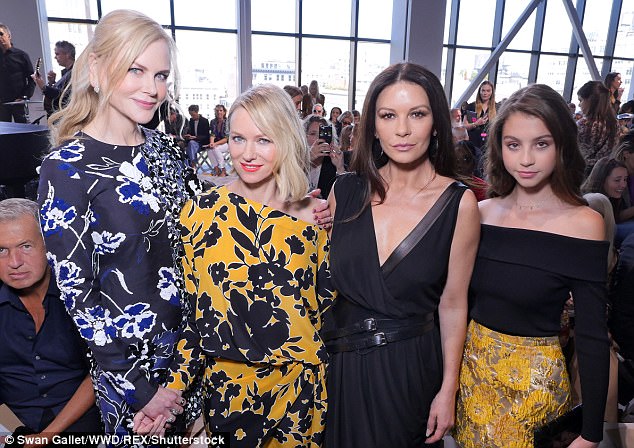 A-list: She was joined by Nicole Kidman, Naomi Watts, and Catherine Zeta-Jones (and her daughter) in the front row 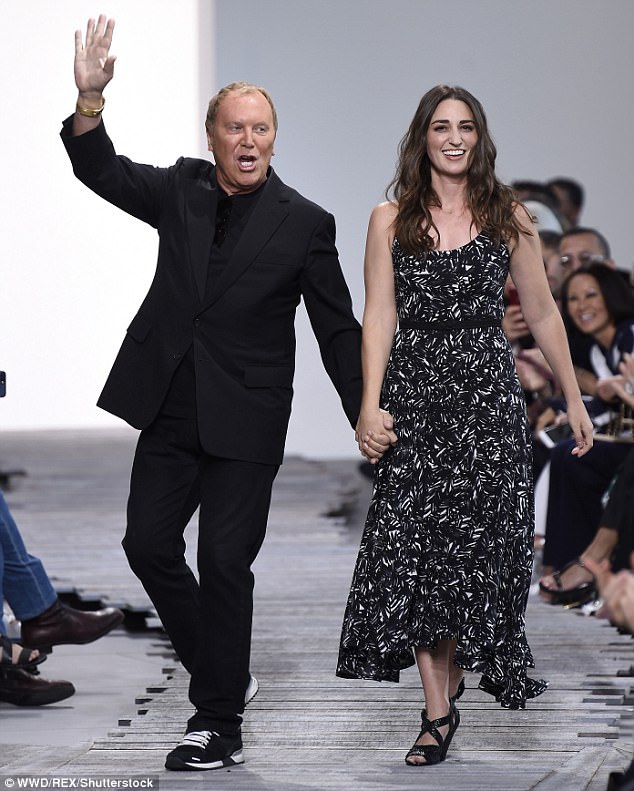 Trends and tunes: The fashion show also included a performance by singer Bareilles

In 2011 at age 10, she posed for an issue of Vogue Paris, in a series of images that some critics said sexualized the little girl. Now a teenager, she’s signed with IMG, is a brand ambassador for L’Oréal, and has been named the face of a perfume by French designer Lolita Lempicka.

Though she didn’t make it onto the Calvin Klein runway, she did have a prime seat to watch supermodels Carolyn Murphy, Kendall Jenner, Ashley Graham, Bella Hadid, and Kate Upton walk in the show.

The presentation also included a performance by singer Sara Bareilles. 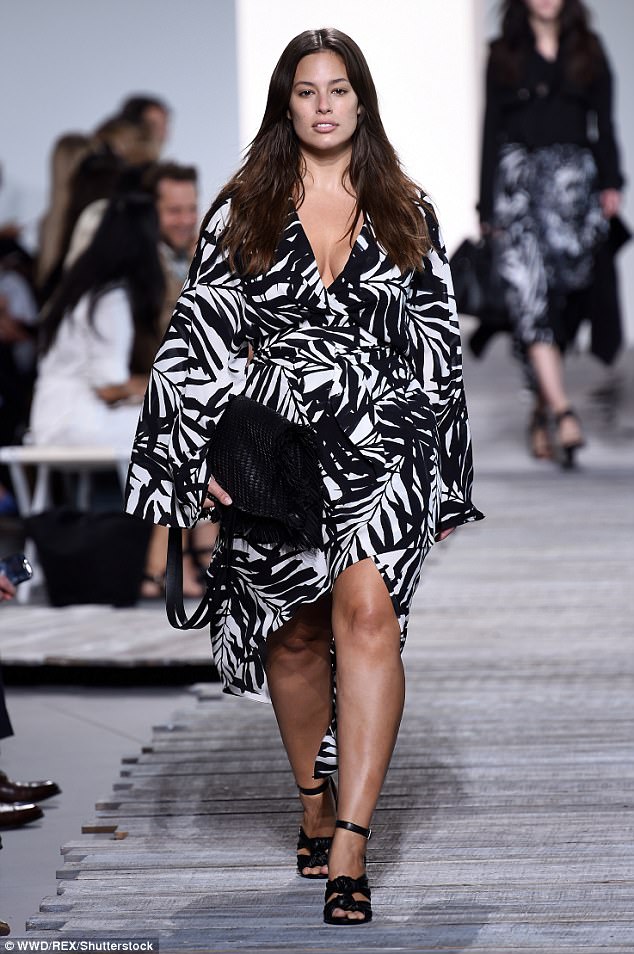 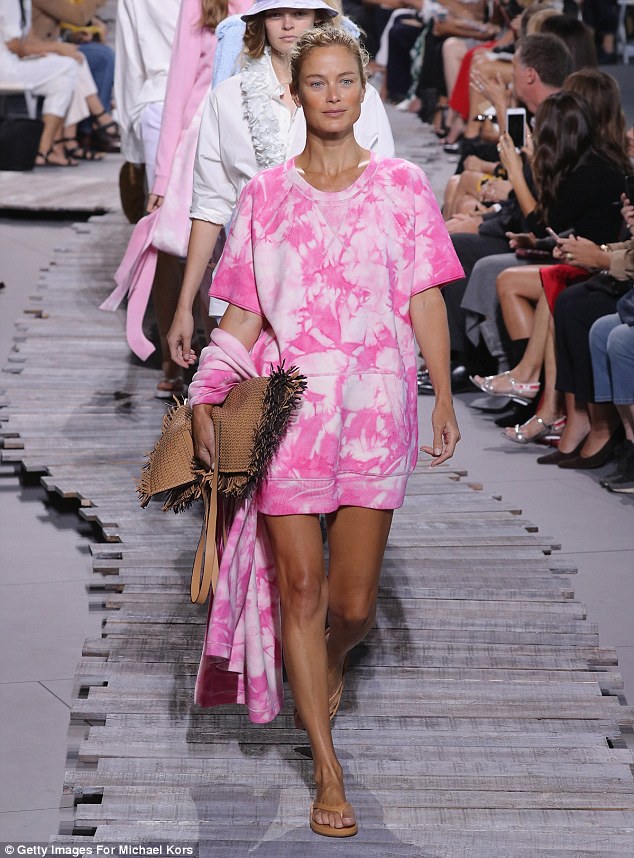 Vets, too: Carolyn Murphy, a Kors favorite, kicked off the show 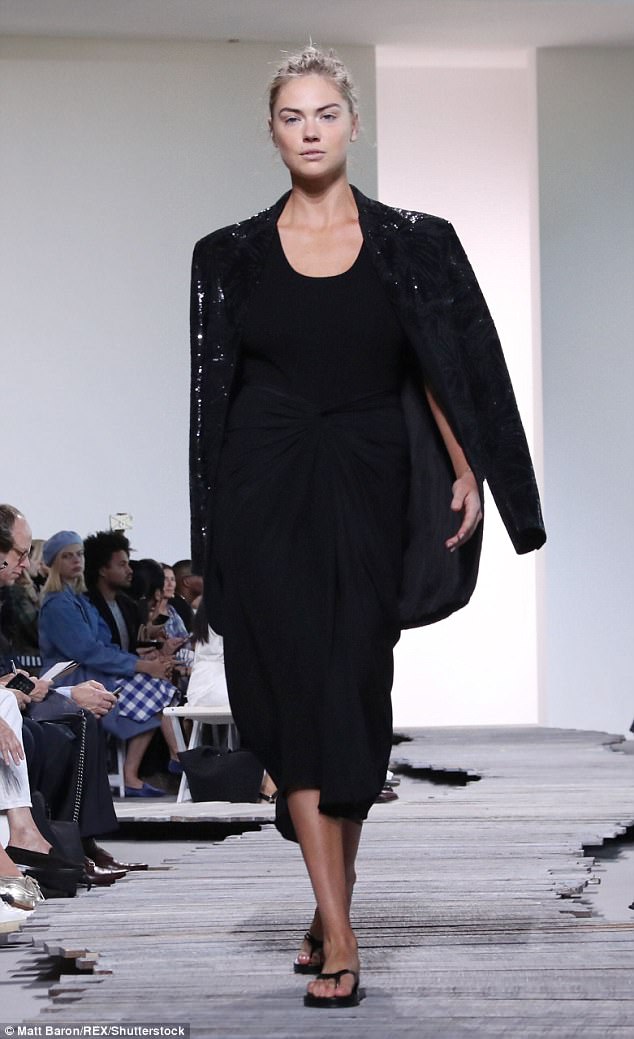 Final spot: Kate Upton, in one of a few all-black looks, closed out the show

Laid-back: The collection featured quite a few dresses in a tie-dye print

Allover: Pastel tie-dye made its way on to accessories, too, including lei-like necklaces, shoes, and bags

Carolyn, Kendall and co. helped show off Kors’ Spring 2018 collection, which took viewers on a bit of an island vacation.

A handful of glitzy dresses for a swanky night out came down the catwalk — modeled by Kendall and Bella, among others — but even those were often accessorized with flip-flops.

Speaking about his overall aesthetic, Kors told Vogue this week, ‘The Michael Kors woman very much knows herself. She’s never a fashion victim. She’s more interested in projecting her own style. If you think about stylish women, they always know themselves well.’ 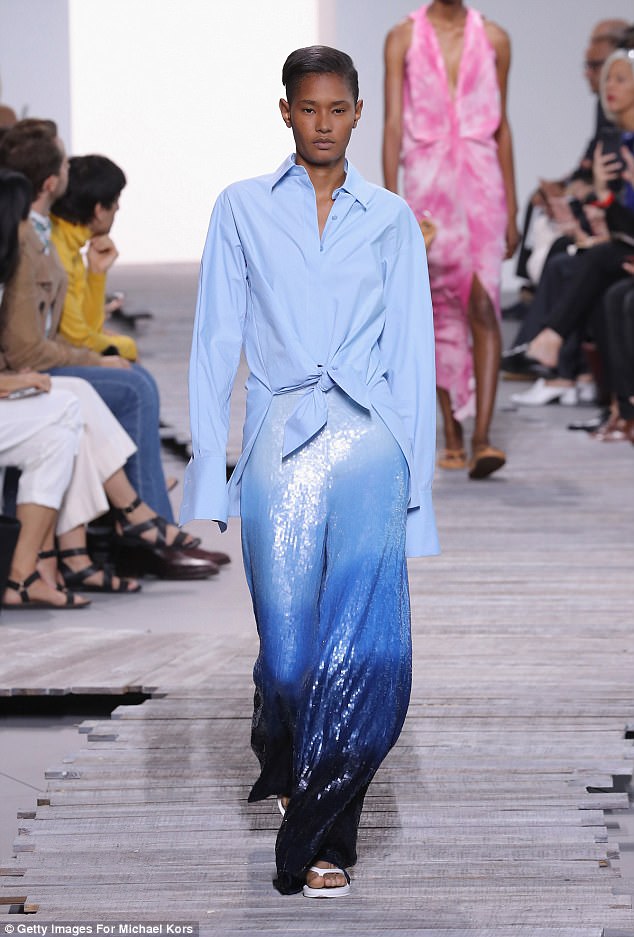 Dressed up, dressed down: Even the few glitzy looks has dressed-down touches

That’s focus on confidence and being self-assured is one reason he cast Ashley Graham in this show.

‘When you’re talking about confidence, Ashley Graham is so amazing,’ he added. ‘She’s smashing the ceiling and breaking the rules. There’s nothing about her that’s shy or retiring and I think that kind of confidence comes across when you watch her on the runway. I think she’s sending an amazing message.’

He also divulged that he sometimes lets his models have a say in his show.

‘My job as a designer is to make people feel they look good,’ he said. ‘When it comes to their look for the show I try to dress them in a way they’d want to get dressed themselves.

‘Sometimes I’ll give them two choices and say: “Which one would you want to wear?” Carolyn Murphy said to me when she got dressed for the autumn/winter 2017 show: “Can I leave in this outfit?”‘

Aloha! More island prints made this collection a vacation essential 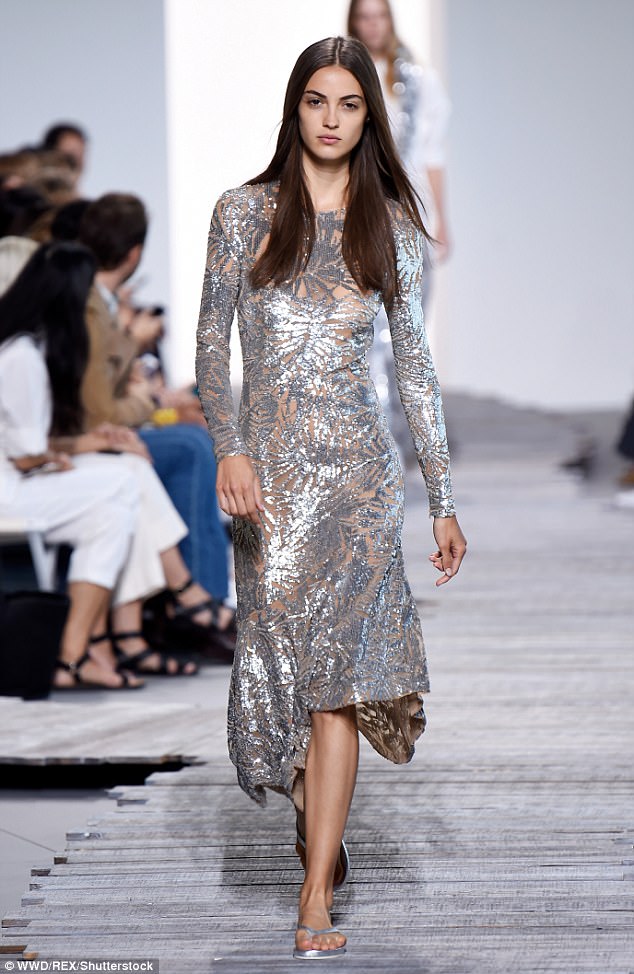 Fancy gala or beach day? There were very few eveningwear looks, and this one was worn with flip-flops

White: Some of the looks from the collection look perfect from going to the beach to a resort town restaurant