Most bizarre Michelin-starred restaurants in the world

Eating at a Michelin starred restaurant may be a dream for many foodies around the world – but the actual experience of dining at the eateries can be a little bizarre.

Created in 1900 by the brothers Andre and Edouard Michelin of tyre company Michelin for motorists, the guide has become a reference for food lovers and has been known to make or break careers.

However these restaurants go far beyond the norm – with cooking outside the box and menus which will leave many with their jaws on the floor.

Here FEMAIL takes a look at some of the weirdest Michelin eateries out there:

This micro portion of raw meat sits atop edible mould, which is part of the Spanish Michelin diner’s theme

Mugaritz in San Sabastian, Spain looks fairly unassuming from the outside, but serves up artistic avant-garde dishes.

Among it’s dishes are a meal which require patrons to eat from a face shaped plate with edible flowers, while another snack appears near identical to an open book.

One of the strangest features of the menu sees diners invited to try edible stones.

Meanwhile the nature theme event extends to the meat course – which features a wisp of raw meat, with a sprinkle of sea salt, sitting atop edible ‘mould’.

Visitors said on TripAdvisor they were pleasantly surprised by the 20-25 course menu.

Some described it as a ‘sense driven, gastronomic experience rather than a simple lunch’ while others implored curious foodies to ‘ignore the haters’.

Those who aren’t fans of the arty menu have called the £300 a head feast ‘inedible’ and weren’t keen on paying a £220 deposit to boot. 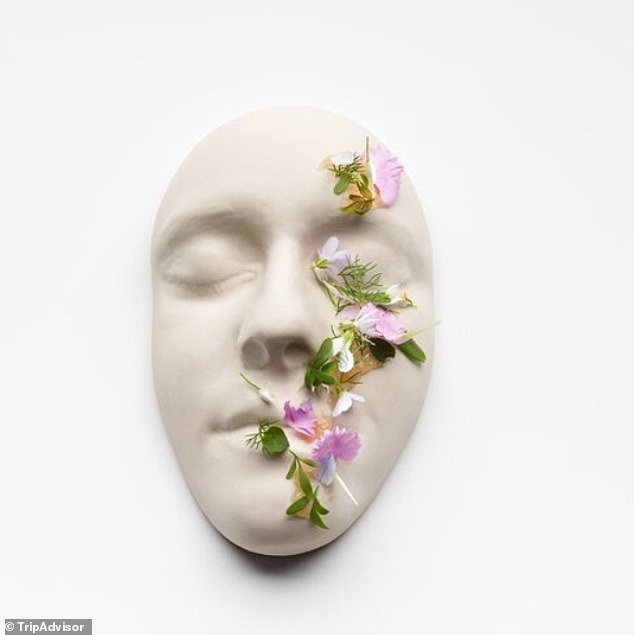 This beautiful sleeping face plate looks more like a work of art than a meal, featuring edible flowers 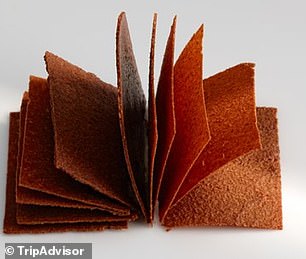 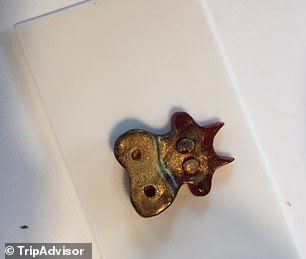 Quince is a Michelin starred restaurant in San Francisco with it’s own farm in Bolinas, California and prides itself on it’s evolving menu and futuristic way of serving food.

The tasting menu changes daily and is prepared by the team to focus on a single ingredient either truffles, scallops, or squab, which is a juvenile pigeon.

Requiring a $200 (£167) deposit to dine there, guests cough up a significant amount to eat at the unusual restaurant.

Among the most unusual dishes is one named A Dog in Search of Gold, which sees a meal served up on a truffle hunting themed iPad, placed within a box.

The dish is crafted from chestnut crisp and a celeriac, porcini and ricotta truffle’ dusted with porcini powder. 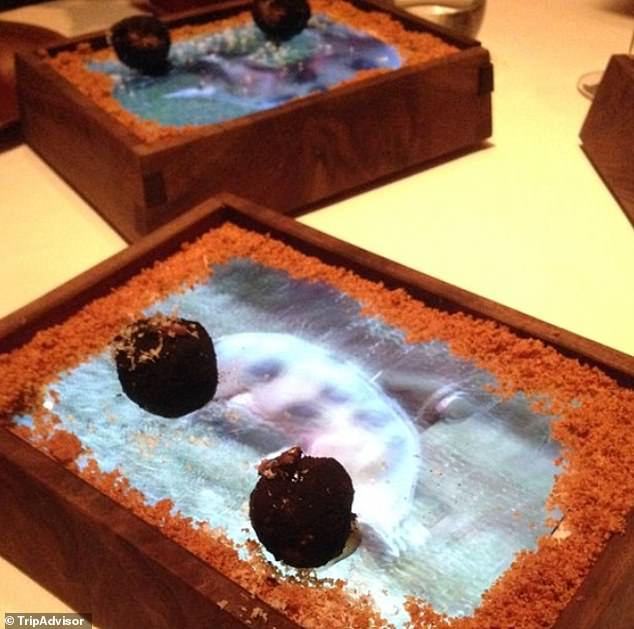 This is possibly one of the most expensive ways to serve food, even when it comes to Michelin dining – these truffles are presented on an iPad, in a box surrounded by crumbs 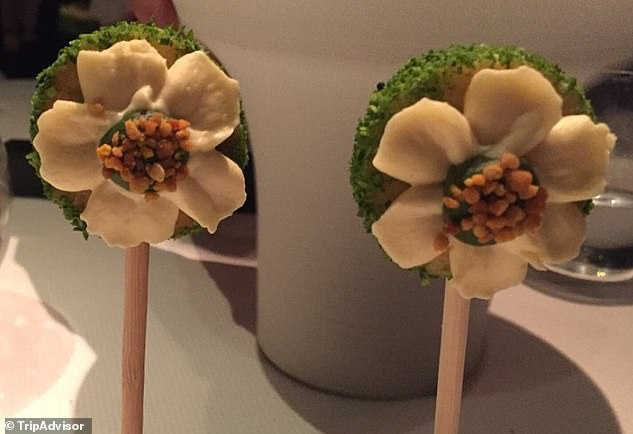 These creative flowers look like mini windmills on a stick – serving mousse, and a ‘moss’ looking outer layer

Bro’s in Lecce made headlines last year when a brutal review of the restaurant went viral.

At the time, readers were delighted with its descriptions of the ‘disastrous’ meal that included slivers of edible paper, ‘rancid ricotta,’ foam served in a plaster cast of the chef’s mouth, and ‘an oyster loaf that tasted like Newark airport.’

Everywhereist travel writer Geraldine DeRuiter, 41, and seven of her friends visited Bros’, a restaurant in Lecce, Italy with a coveted Michelin star.

But not only were they left unimpressed by the 27 courses they were served — they also walked away starving.

Since then, scores of TripAdvisors reviews have left diners divided after a visit to Bros’. 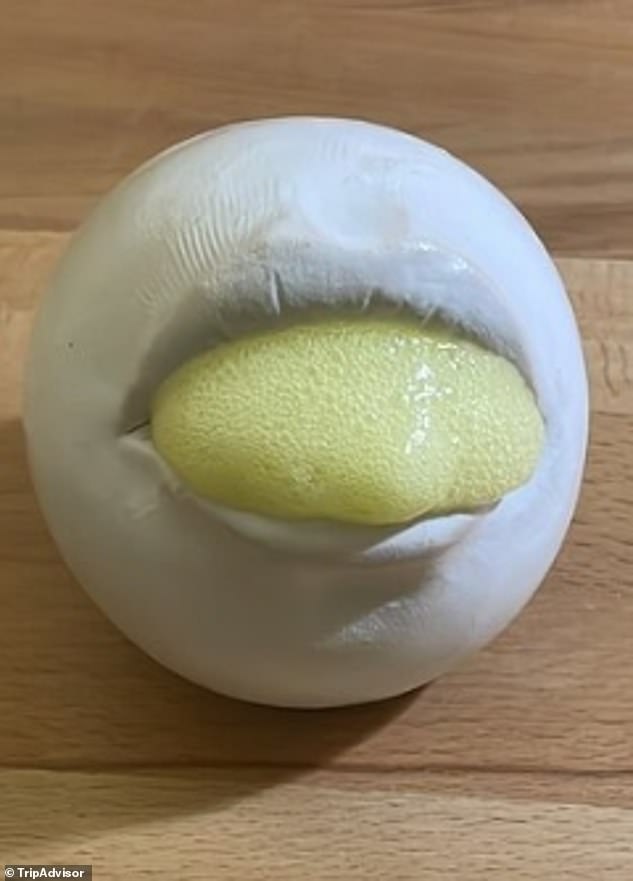 Give us a kiss? This citrus foam is served without utensils at Bros, dribbling out of a white cast of chef Floriano Pellegrino’s lips 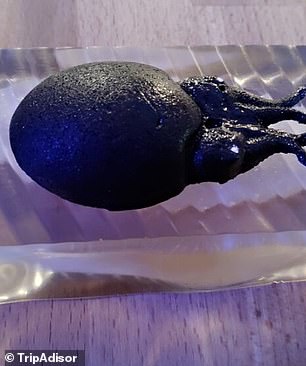 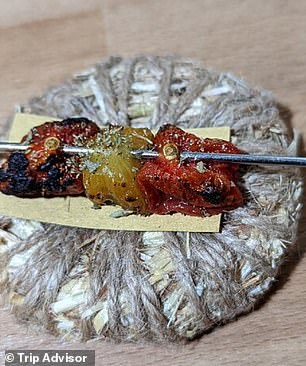 Among the unusual courses at the restaurant is a dish of marshmallow and jelly which is shaped like an insect but tastes like cuttlefish (left), while a ‘vegetable course’ is served on top of a thread and straw mat (right) 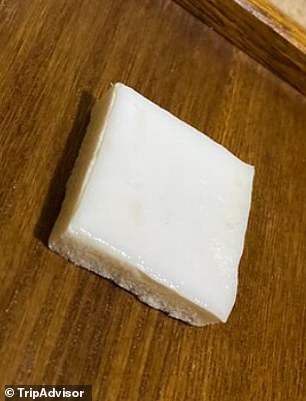 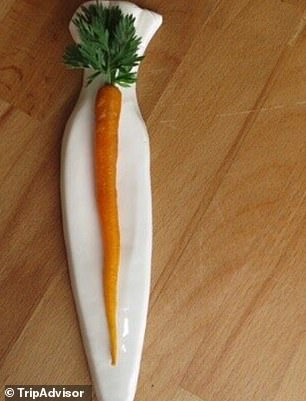 Another dish served by the restaurant is a simple, small square (left), while another course features a thin carrot on a carrot shaped plate (right) 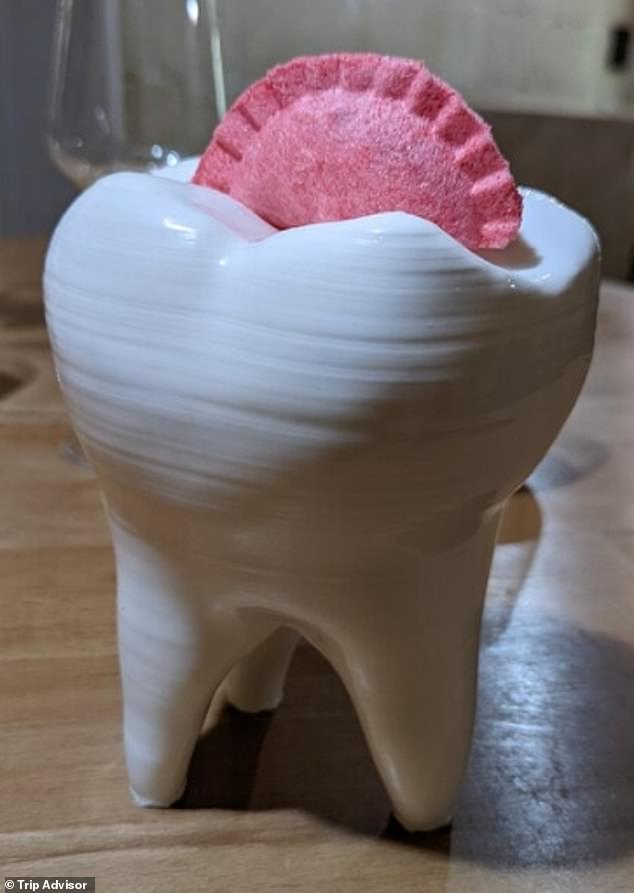 With one Michelin star, it is Leece’s only Michelin eatery,  costing over £150 per person for a 20-25 course tasting menu.

Some guests appreciated the art, but warned others ‘if you want to eat food and have a meal’ Bros’ isn’t the place for you.

Not to be missed is a ‘meat infused’ course, which sees guests slurping up ‘droplets’ of meat served by pipette onto the plate.

Chefs Floriano Pellegrino and Isabella Potì have claimed they are ‘creating art’ and serving with ‘theatrical flourish’.

Serves up ants as a dish 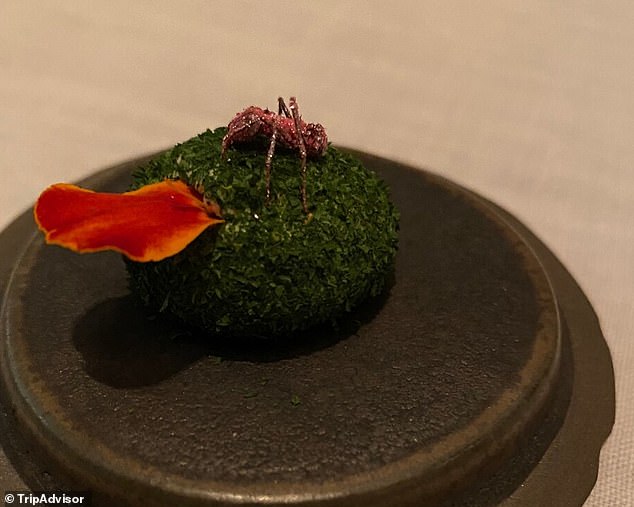 While eating at a Michelin rated restaurant may be a dream for many, here FEMAIL reveals the bizarre reality of dining at one of the prestigious eateries (pictured, ants being serviced at D.O.M in São Paulo

D.O.M in São Paulo was founded by Alex Atala, who uses traditional Brazillian cooking methods to whip up his artistic cuisine.

However despite gaining a reputation as one of the world’s best restaurants, having previously been listed as 11th on the planet, some of the dishes are a little unusual.

His two starred Michelin restaurant serves up actual ants as a course, which have been called ‘delicious’ by guests.

The tiny portion of insects are served on top of a faux moss ball.

Others called it ‘gimmicky’ and said that the crunchy critter didn’t ‘add much’ to the experience.

Aside from the insect themed element, the menu is fairly standard for a Michelin star – using edible flowers and arty plates for it’s £200 a head menu. 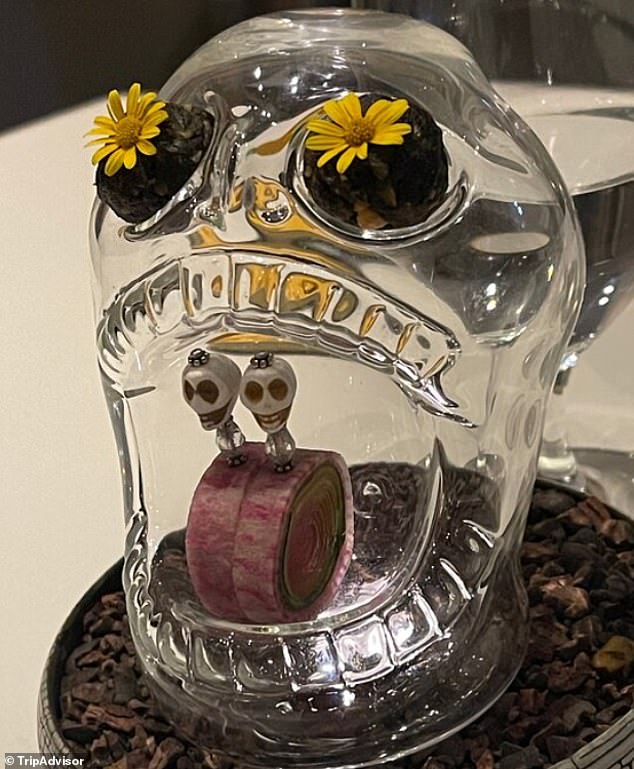 Kingdom of the glass skull: This glass skull serving dish is a unique way to eat and the food itself has a small skull skewer in it too

It is one of only 14 restaurants in the U.S. to earn the coveted Michelin three-Star rating.

Chef Grant Achatz offers three separate eating experiences for diners which include The Kitchen, The Gallery and The Salon.

The Michelin starred restaurant that has taken the ‘edible art’ theme rampant in the fine dining world, to extremes. 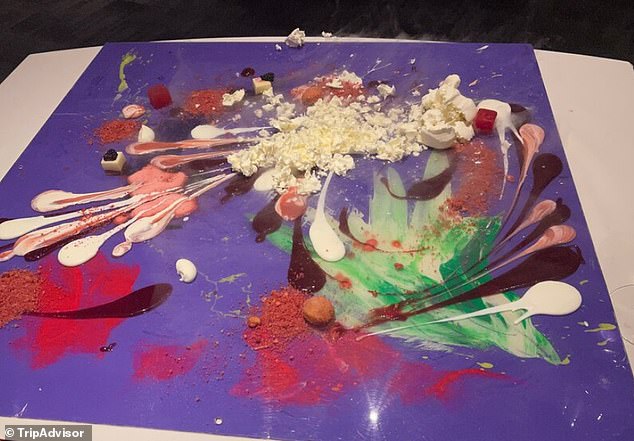 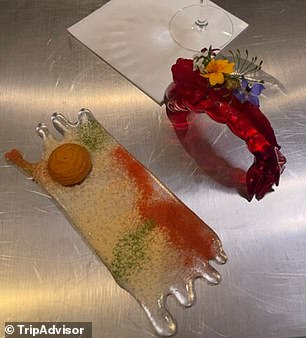 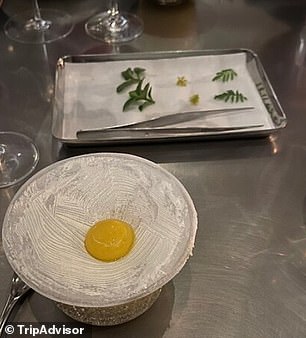 One sugar spectacle creates an unusual dessert for diners (left). Another dish invites diners to get their  own set of giant tweezers to lift up tiny portions of herb and an egg yolk in a bowl smeared with cream (right)

Waiters and waitresses physically drop food onto a board and ‘create’ art with it, designing a unique, colorful canvas for guests to enjoy.

If you don’t fancy getting served up Picasso on a plate, there’s the option of eating a tiny meat course from an ornate glass skull with flowers for eyes.

Alinea has been universally praised for its innovative approach to modernist cuisine.

TripAdvisor reviews have called it ‘incredible’ and a ‘theatre of the unexpected’, but some aren’t convinced saying ‘there is a reason you prepay’.

‘Bemused and cross’ mother reveals her son, 13, spent £150 on fried chicken and doughnuts – while another blew £2,000 on takeaway

Michelin-starred restaurants should be STRIPPED of their awards if staff are bullied, chefs demand