Most investors would dump a stock after an accounting scandal

When scandal strikes: Investors say accounting breaches and human rights abuses are the most toxic and a trigger to sell

Most investors would dump a stock after an accounting scandal, cyber hack or environmental disaster, new research shows.

Financial corruption and human rights abuses are most likely to make investors flee, with three in five saying they would withdraw their cash in these circumstances.

A data privacy breach or hack, or a scandal relating to treatment of the workforce is just as damaging, with a similar number likely to sell out, according to research by Schroders.

Scandal: People in the Americas are more likely than Europeans to sell investments as a result of climate change disasters

Some 53 per cent of investors say they would ditch a stock in the case of a climate change catastrophe like an oil spill or emissions scandal, or negative revelations about internal company culture.

But while moral outrage might drive some of these decisions, investments that turn toxic and dive in value sometimes recover, and investor pressure could make some companies change their ways.

‘Remaining invested and influencing company practices on behalf of our clients, is often a more effective way to invoke positive change than divesting entirely,’ says Doug Abbott, head of UK intermediary at Schroders.

Read more here on how to decide whether to sell a tanking stock, or buy more. Meanwhile, an investing professional offers tips on learning from blunders here.

Schroders’ latest investor survey shows that 57 per cent feel social issues are more important to them now than before the Covid-19 crisis, while 54 per cent feel more deeply about environmental issues.

What does responsible investing jargon mean?

Two thirds of savers want to invest responsibly but are baffled by jargon: How to tell ESG from SRI and impact investing… and spot greenwashing here.

Nearly half are attracted to sustainable investments – those contributing positively to the world – because they hope to make an environmental impact, while 36 per cent think they will generate higher returns.

Around a third say regular reporting highlighting the impact their investments are having would motivate them to increase their exposure.

A similar proportion want managers to ‘self-certify’ that their investments are really sustainable.

Separate research shows many investors are wary of ‘greenwashing’ – bluffing about action to combat climate change.

Investments not being what they claim to be was cited by 44 per cent of investors as their biggest worry about putting money into ‘environmental, social and governance’ (ESG) products.

The Schroders survey polled a total of 23,000 people from 33 locations around the world, but the figures cited here are based on the responses from 1,000 UK investors.

The overall global results revealed a greater inclination to ditch stocks after a scandal than in the UK. 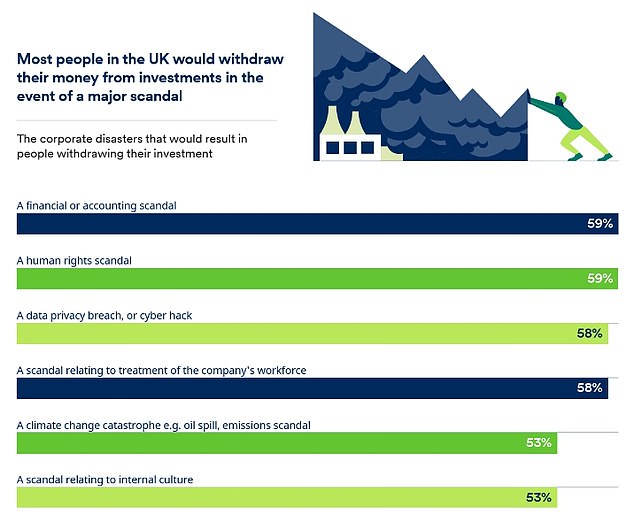 Would you sell up after a scandal? Majority say they would flee investments that turn toxic (Source: Schroders)

Doug Abbott says: ‘The first important takeaway is that investors are taking sustainability and social issues seriously and factoring them into their investment decisions.

‘This growing social consciousness is raising the stakes for companies and investors.’

He adds that Schroders wrote to FTSE 350 companies earlier this year asking them to publish detailed plans on how they intend to hit net zero carbon emissions by 2050, beyond simply showing long-term ambition.