When it comes to uploading a selfie or speed-writing a text, Britain’s so-called millennials are streets ahead of their parents.

But asked to perform a traditional skill, such as sewing on a button or bleeding a radiator, many are completely lost.

A study of household skills by the Good Housekeeping Institute paints a depressing picture of Britons under the age of 34.

The survey assessed the abilities of 2,000 people in carrying out 18 once-typical domestic tasks.

And it suggests that, with many young adults living in the family home into their 20s and 30s, they have not needed to learn simple domestic skills.

Even elementary tasks once learned in cookery classes at school seem way beyond them.

Similarly, sewing, woodwork and metalwork classes have largely disappeared as the education system chooses to push computer skills. Good Housekeeping reports that the result is that many younger adults have no idea what the word ‘darning’ even means.

In an era of throwaway fashions, just one in four knew how to repair an item of clothing and so give it a longer life.

Just one in three were confident they could shorten a hem, descale an iron and make a white sauce or roux, which is the basis of many homemade dishes.

Less than half know how to bleed a radiator, a skill needed to make sure they are filling with water – rather than air – to get the most out of the heating. Psychologist, Dr Laura Markham, said: ‘Millennials are living at home for longer, and that may mean they don’t need to learn about fixing fuses because someone else will do it. 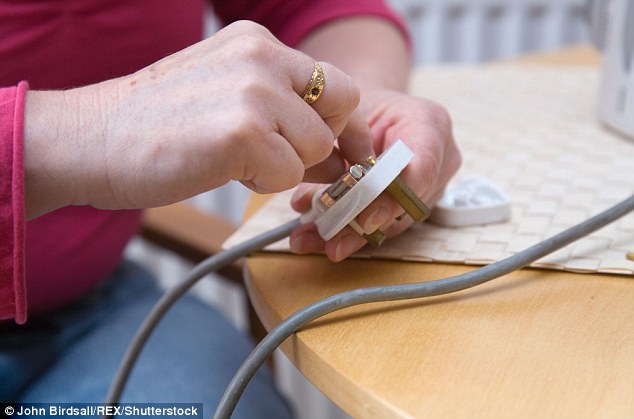 Only 55% of millennials can change a plug socket

‘Plus, they are a busy generation. If they’re swamped with hours of schoolwork, football practice and music lessons, you as the parent help them get their work done so they can get to bed at a reasonable hour. Consequently, you don’t ask them to help as much around the house as you may have done.’ Dr Markham said young adults have focused on developing other skills. They can also access video tutorials on how to perform most of these tasks through services such as YouTube.

‘Millennials are resourceful and will learn the household skills they need as they become necessary,’ she added.

Consumer director at Good Housekeeping, Caroline Bloor, who is the mother of a millennial, admitted her parents helped to save her a fortune over the years.

‘If I totted up how much money my dad saved me in DIY over the years, it would be thousands. Together, we not only put up blinds and shelves, but also laid laminate flooring, put up wallpaper and even repaired flat roofs.’

Full details of the skills people need to know are in the March edition of Good Housekeeping.