Mother, 28, reveals she suffered a STROKE ‘from taking the Pill’

A mother-of-two who was left with a paralysed face and arm after having a stroke says it was caused by her contraceptive pill.

Issy Fox, 28, had been taking the Pill for three months before she had the stroke and claims doctors couldn’t find any other explanation.

She noticed something was wrong when her words came out as a mumble, one of her shoulders ‘slumped’ and her arm was too weak for her to lift it.

After being rushed to A&E in an ambulance phoned by her mother, who witnessed the event in horror, Ms Fox feared she would end up permanently paralysed or dead.

She has since recovered except for some numbness in her face, but has renounced hormonal contraception forever, choosing instead to stick with condoms.

Issy Fox, from Crewe in Cheshire, had a stroke in February and she believes it was caused by her contraceptive pill, which she had only been taking for three months 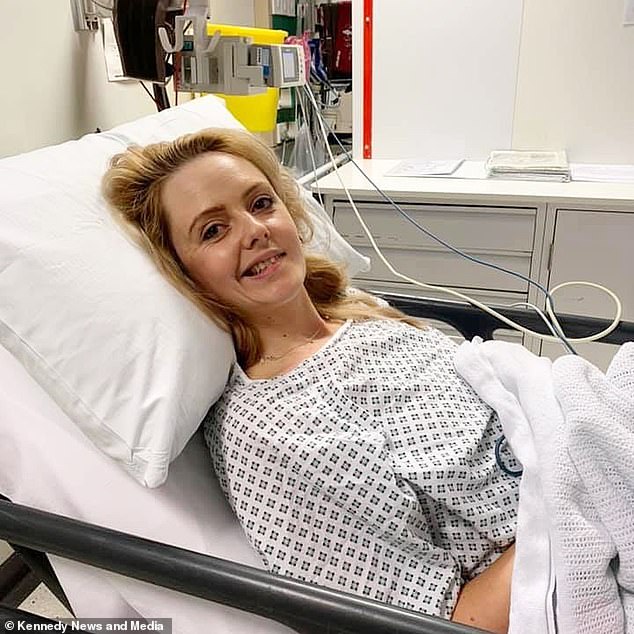 ‘All the blood tests and heart tests showed no other reason for the stroke,’ said Ms Fox, from Crewe in Cheshire.

‘There was nothing in the family. My heart rate was fine, my blood tests were fine.

‘That’s the only thing [doctors] can conclude that had changed in my life – was me taking the pill. I had to come off it straight away.’

The NHS acknowledges taking the combined pill can raise the risk of a blood clot because oestrogen increases the number of clotting agents in the body.

But it says the risk is ‘very small’ and doctors will do tests to determine whether a woman is likely to develop a blood clot before prescribing them the Pill.

If a blood clot moves and blocks a blood vessel supplying the brain it can cause a stroke.

‘What they think happened is that the blood clot moved at some point,’ Ms Fox said. ‘Which meant the damage I had was quite minimal considering the type of stroke.’

Ms Fox said the stroke, which happened in February, had a huge emotional impact on her as well as causing physical damage.

‘Now it’s more the mental side effects. It has been a real struggle emotionally. There was a lot of anger, and “why me?” and stuff like that.

‘Now it’s just a case of going forward and doing what I can.’

She became so fearful after the first stroke that, despite being put on blood thinning medication and stopping her pill, she wanted her mother, Rhiannon, 51, or partner Luke Connolly, 28, by her side at all times. 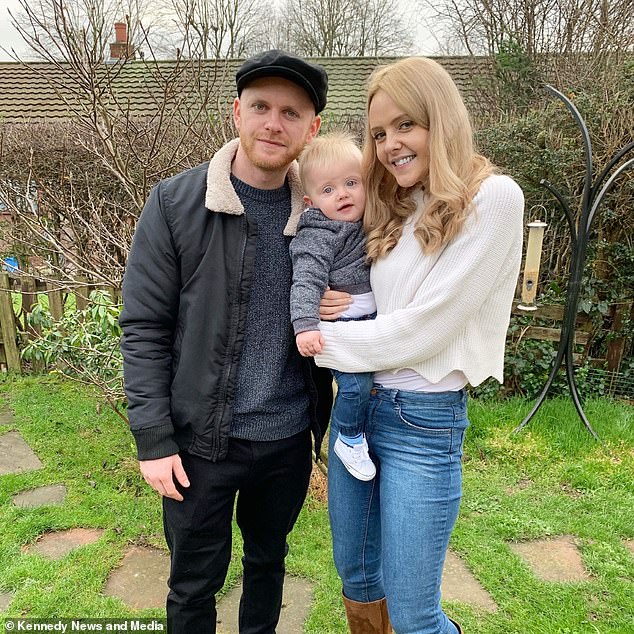 Ms Fox, pictured with her partner Luke Connolly and their son, Freddie, said the stroke had a huge emotional impact as well as causing physical damage 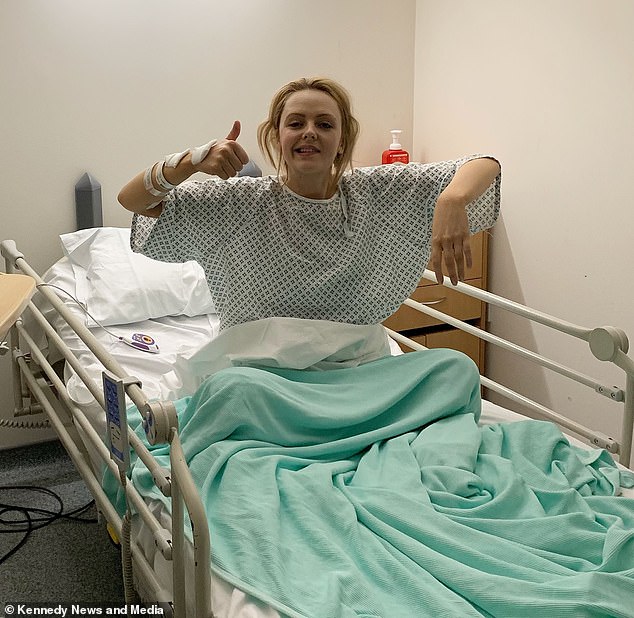 ‘I had had this perfectly normal day,’ Ms Fox said. ‘I don’t work on Fridays so I spend that time with my little boy. This time my mum was off work so we went to lunch at a local pub.

CAN THE CONTRACEPTIVE PILL CAUSE A STROKE?

The NHS lists stroke as a potential side effect of taking the contraceptive pill but says the risk is ‘very small’.

Doctors intending to prescribe the Pill are expected to carry out tests and decide whether a woman is likely to develop blood clots or have a stroke if they start taking it.

Researchers from Loyola University in Chicago last year published a study confirming the link between the two but saying only the risk of a stroke caused by the brain’s blood supply being blocked by a clot.

Blood clots may be more likely in women taking the pill because oestrogen – a main ingredient of contraceptives – boosts the number of clotting substances in the patient’s blood.

This raises the risk of a clot forming anywhere in the body and, if it becomes dislodged and travels to the brain, it can cause a stroke.

‘We came home and sat down and the next thing was that I couldn’t speak. I tried to get my words out but I was stammering on my words.

‘I’ve forgotten what it was but I was saying a word beginning with “p” and to me it sounded like I was going “p-p-p”.

‘But my mum said my whole face just dropped and I was going “mmurgh”. I couldn’t make any sound.

‘She said to me “what are you doing?” and I said, “I don’t know, I don’t feel well”. She thought I was being silly, which wouldn’t be out of character.’

Ms Fox then started to become more unwell, with one of her arms going weak and her heart rate rising.

‘My shoulder slumped and I couldn’t get my words out again and told [mum] I don’t feel well,’ she said.

‘She said, “are you having a stroke?” and I said, “I think so”. And she called an ambulance. It was really quick, it was within seconds that it happened.

‘The paramedics did some tests and said can you smile – I couldn’t – can you lift your arm into the air. I could but one was significantly lower [than the other].

‘I couldn’t grip and my heart rate was too high, and they sent me off to hospital. It was very dramatic.’ 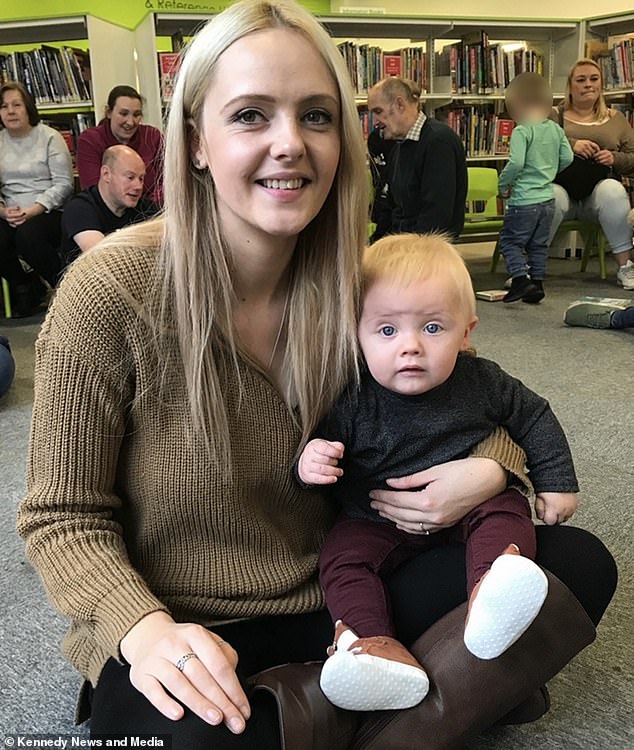 Ms Fox said she had been spending the day with her mother, Rhiannon, and her son (pictured) when the stroke happened. She said: ‘My mum said my whole face just dropped and I was going “mmurgh”. I couldn’t make any sound’ 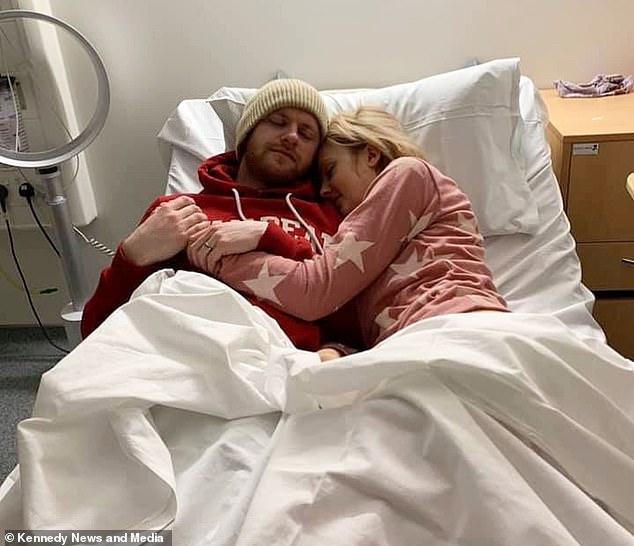 Ms Fox, pictured in hospital with her partner, Luke, has since made a good recovery and regained the use of her hand, although she still suffers with some numbness in her face

Ms Fox said as the day wore on her right arm became completely paralysed, which she called a ’cause for concern’.

But as her hand has since returned to full strength and, despite some numbness in her face and what she describes as a ‘crooked’ smile, she has recovered quickly.

However, her ordeal has put her off hormonal contraception for good.

She had already tried the injection, which left her infertile afterwards and needing medication to be able to conceive, and the coil, which perforated her uterus when it was being put in. 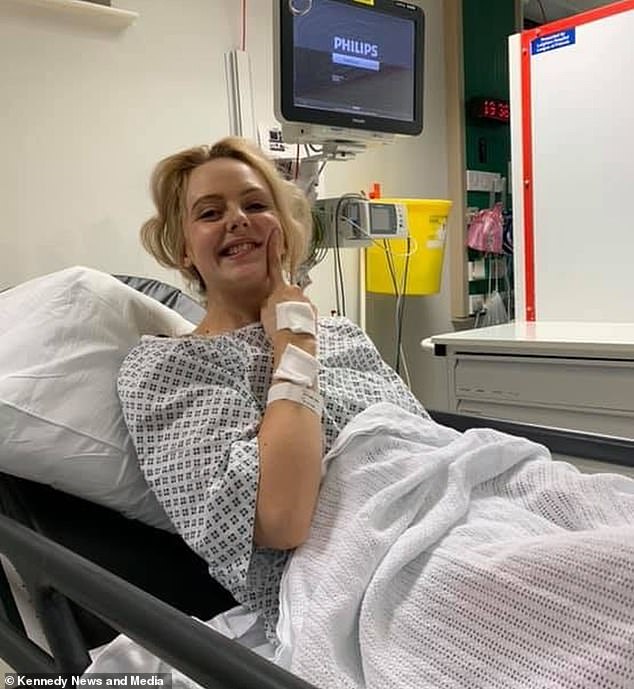 ‘Now I’m just not using any hormonal contraception ever,’ Ms Fox said, explaining the experience has destroyed her faith in the contraceptive pill

‘We were thinking of giving it another year and trying for another baby but now its a case of we don’t know if we’ll be able to have children again,’ she said.

‘I was on the injection a few years ago and that made me infertile. I had to go through fertility treatment to get pregnant.

‘I went for a coil fitting in October and it accidentally perforated my uterus which caused a massive bleed, so I had to go to hospital. I’m completely put off the coil now.

‘That would be the most logical and sensible solution to go for. But I’m just not interested at the moment.

‘Condoms will do, and we’ll just have to be extra careful. I’m just glad I’m alive and we’ll have to be sensible.’

Ms Fox is now running a 5K to raise money on March 24 as part of the Stroke Association’s Resolution Run series.