Mother, 31, reveals how her newborn was ‘diagnosed’ with a tumour via a stranger on Facebook

A mother has revealed how her newborn was ‘diagnosed’ with a tumour that could have caused her to go blind via a stranger on Facebook.

Amanda Dobbins first noticed her daughter Sophia had a tiny blemish on the tip of her nose when she was just a few days old.

Reassured by medics it was just a birthmark, the 31-year-old became concerned when the red spot started to grow.

Within days, the blemish left Sophia looking like ‘she’d had a bucket of blood tipped over her head’ and was even covering her eye.

Desperate, Mrs Dobbins, of Cardiff, posted a picture of her daughter on a parent support group, where a stranger urged her to have Sophia tested for haemangioma.

Medics later diagnosed the newborn with the tumour, which causes a collection of small blood vessels to develop beneath the skin and can lead to blindness if an eye is affected.

After a year of treatment, Sophia’s blemish is almost gone, with her being a happy, healthy 14-month-old. 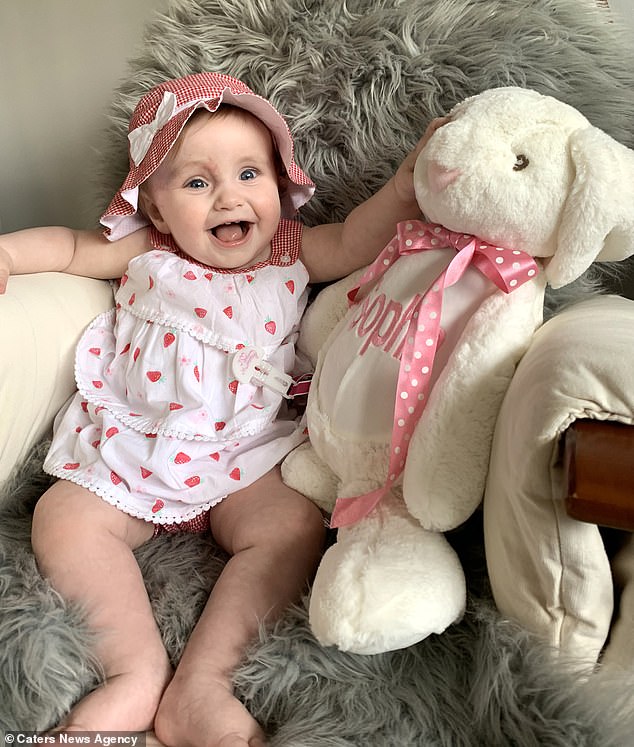 Sophia was later officially diagnosed and began a year of treatment at Great Ormond Street Children’s hospital. She is pictured recently, with her blemish visibly reduced 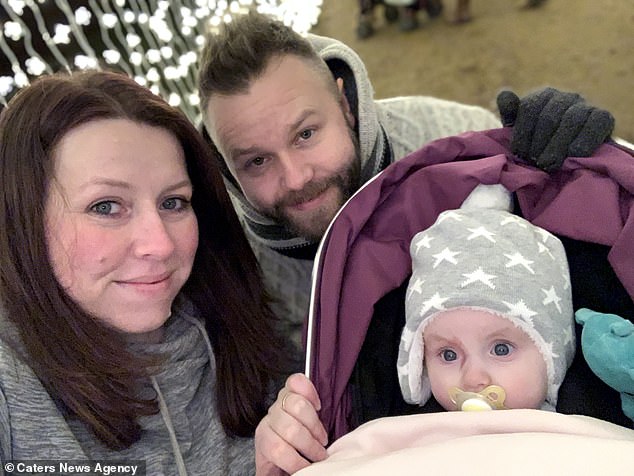 Speaking of her daughter’s condition, Mrs Dobbins, a pharmacy technician, said: ‘It would have done some major damage.

‘Because of how quickly it developed and how quickly it grew if we hadn’t have gotten her on a treatment, when we did, she would possibly have damaged the sight in her right eye completely.

‘I think we were very lucky. I dread to think what it could have cause if we had just listen to what the doctors had said.’

Mrs Dobbins and her husband Neil first noticed a tiny mark on Sophia’s nose when she was three-to-four days old.

‘First the doctors said it was a stork bite because it was really light pink before we left the hospital it got a bit darker so they said it’s a port wine stain and that’s where they left it,’ she said.

The new parents became increasingly concerned when the mark became bigger and redder.

‘It went from very pale pink to looking like someone poured a pot of blood over her head, it was really swollen, it would bleed,’ Mrs Dobbins said.

The blemish was even covering one of Sophia’s eyelids, making it difficult for her to open that eye. 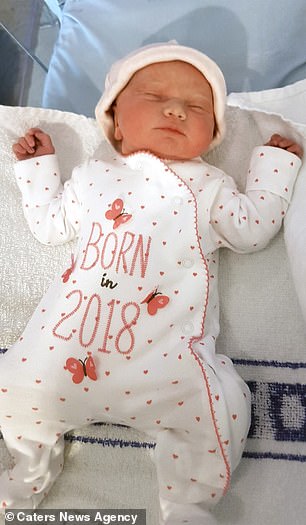 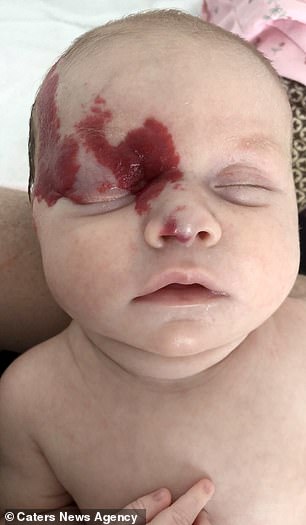 Pictured left as a newborn, Sophia had just a tiny scratch on the tip of her nose. Over the next two weeks the blemish grew and became redder (see right) 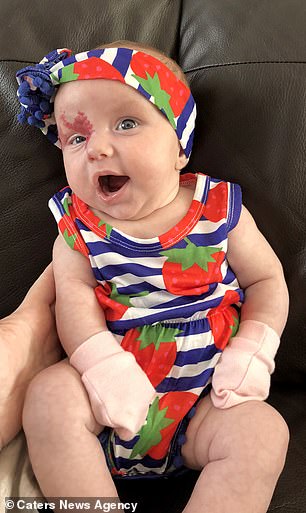 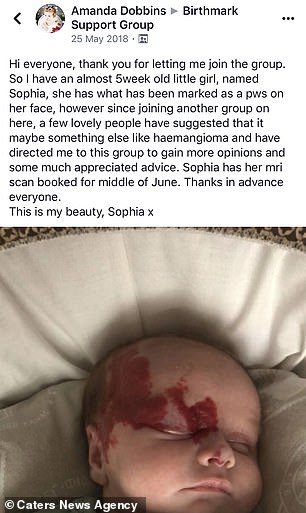 Sophia is pictured while on propranolol, which narrowed her blood vessels and prevented blood flowing through her haemangioma. Right is the concerned message her mother posted

The new parents decided to post a picture of Sophia on Facebook to see if anyone had any advice.

‘It all depends on the location but in Sophia’s case it was very close to her eye and could affected her sight.’

Off the back of the stranger’s recommendation, Mrs Dobbins contacted Great Ormond Street Children’s hospital, which eventually led to Sophia’s diagnosis.

‘They told us they’d start her on propranolol, but we’d have to stay in the hospital to be monitored,’ she said.

Propranolol narrows a patient’s blood vessels, which reduces the amount of blood that flows through a haemangioma. This prevents the ‘blemish’ from growing and causes it to shrink.

‘The medication affects her sleep, you have to be really careful with the dosage because it can affect the blood sugar and the blood pressure so you have to monitor it constantly,’ Mrs Dobbins said. 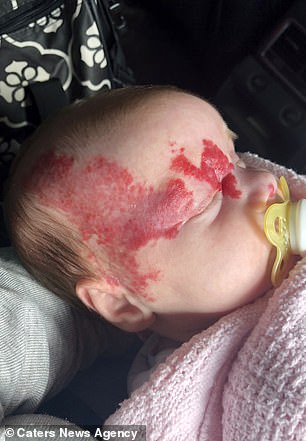 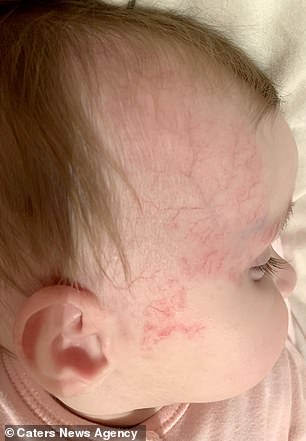 The red blemish is pictured left not long after Sophia started treatment. Within a year of medication, it gradually became paler (seen right), softer and started to shrink 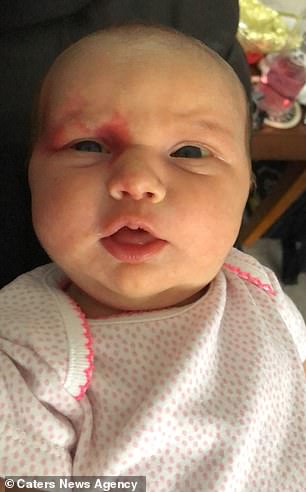 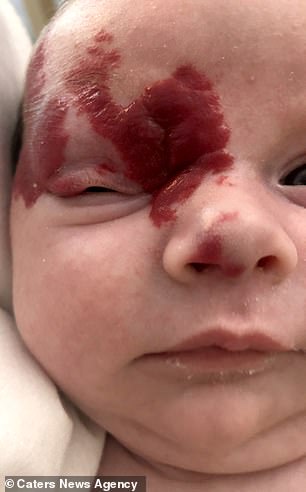 Medics reassured Sophia’s parents the blemish (pictured left during its early days) was just a birthmark, however, it continued to grow. It even covered her eyelid, leaving Sophia struggling to open that eye (pictured). Untreated, this could have caused her to go blind 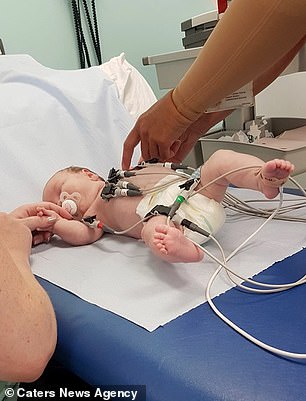 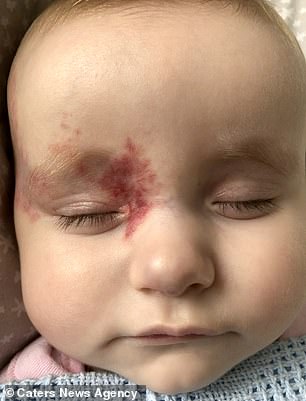 A year on, Sophia has responded to the treatment well.

‘We can’t really remember her with the full on birthmark – it’s very odd,’ Mrs Dobbins said.

However, the parents still have to endure cruel stares when out as a family, with some asking if Sophia fell over and hurt herself.

‘We are just grateful she is not old enough to understand that people are talking about her,’ Mrs Dobbins said.

‘When she gets older we want to teach her to appreciate it and learn it’s a part of who she is.

‘And to know how much she’s been through at such a young age without realising it- she just doesn’t know how strong she is.’

WHAT IS A HAEMANGIOMA?

A haemangioma is a tumour that develops as a collection of small blood vessels beneath the skin.

Also known as strawberry marks, a haemangioma causes a raised, red area on the skin and a bluish swelling deeper underneath.

Their cause is not fully known. Some evidence suggests they may arise from placental tissue early in pregnancy.

Around one in 10 babies have a haemangioma to some extent. They are more common in girls, premature infants, low birth weight babies and multiple births, such as twins.

Most haemangiomas do not require treatment but do need monitoring because they can bleed easily if scratched.

Ulcerated haemangiomas may require treatment, along with those that obstruct the airways, or form on the eyes or lips.

Painkillers and antibiotics may be offered if the blemish is infected.

The beta-blocker propranolol may also be given. This narrows blood vessels, preventing blood from ‘feeding’ the haemangioma. Over time, the blemish becomes paler, softer and shrinks.

Left untreated, haemangiomas on the eye can distort vision and those on the lips can make feeding painful.