Mother, 32, claims she needed a pacemaker fitted because of her energy drink addiction

A woman claims her addiction to energy drinks damaged her heart so much she needed a pacemaker.

Samantha Sharpe, 33, used to drink as many as six cans of energy drink every day and said they would give her ‘palpitations’ and make her heart race.

And the mother of three had to have a pacemaker fitted in February 2018 because she was suffering blackouts and was diagnosed with an abnormal heartbeat.

However, an NHS cardiologist said Ms Sharpe’s condition was probably a coincidence and he isn’t aware of any proof energy drinks can lead to the need for a pacemaker.

Ms Sharpe is now warning others not to make the same mistakes she did and said it ‘breaks my heart’ when she sees children drinking the drinks.

Samantha Sharpe, a mother of three children, said she would suffer palpitations and blackouts because she drank so many energy drinks, which she felt she needed to get through the day

‘I have three children and I work so it was daily life that pushed me to drinking the energy drinks,’ she told Leicestershire Live.

‘I work in the evenings so it got me through the day. It woke me up and got me a bit hyper.’

Ms Sharpe, from Leicester, kept guzzling the drinks, which can contain more than half a day’s worth of sugar in a single can and have high levels of caffeine, for around four years.

Past research has suggested drinking excessive amounts of caffeine can give people high blood pressure, a rapid or irregular heart rate and faster breathing.

Ms Sharpe, who works in a pub, said at her worst she was on the verge of developing type 2 diabetes – she visited her doctor after she began fainting at home.

‘The drinks made my heart beat faster, which would cause palpitations, then [afterwards] I would crash when I needed another one, causing my heart rate to drop to 20 beats per minute.

‘It would give me headaches, I’d be grumpy, and I’d need another one to keep me going.

‘I wouldn’t sleep and I had an overwhelming feeling of doom when trying to sleep. And I’d have the shakes. I felt like an addict.’ 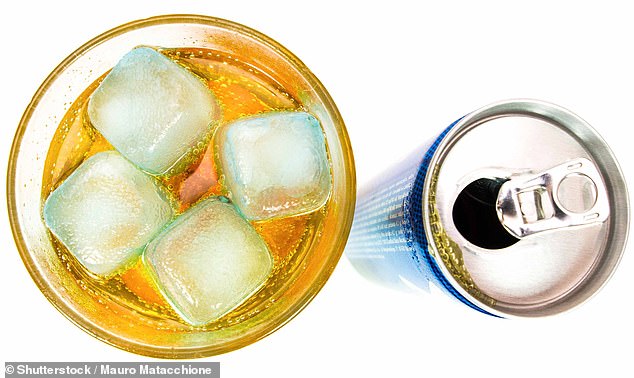 Ms Sharpe drank huge amounts of energy drink for four years. The drinks can contain more than half a day’s worth of sugar in a single can and have high levels of caffeine (stock image)

Ms Sharpe claims she developed a second-degree heart block, a condition in which a problem with electrical impulses in the heart causes it to beat wrongly.

People with the condition may have a slow or irregular heartbeat and suffer symptoms like fainting, dizziness and shortness of breath.

Doctors are unsure what caused the problem but Ms Sharpe said they told her the energy drink habit ‘wasn’t helping’.

CAN ENERGY DRINKS DAMAGE YOUR HEART?

There is no evidence to suggest energy drinks can cause permanent damage to the heart to such an extent someone would need a pacemaker, NHS cardiologist Dr Aseem Malhotra told MailOnline.

‘I see a lot of patients who have palpitations and anxiety attacks which have been caused by energy drinks,’ he said.

Energy drinks do often contain high amounts of caffeine which can, in large quantities, cause caffeine overdose.

Suffering severe symptoms of this is rare but it can cause a faster or irregular heartbeat, fast breathing, increased body temperature and shakiness.

Caffeine can have more severe effects on people with underlying health conditions.

Energy drinks may also contain a lot of sugar which, if consumed in large quantities for a long time time, can raise people’s risk of type 2 diabetes – which can cause permanent damage to blood vessels – and heart disease.

She had a pacemaker, which sends artificial electrical signals to the heart to keep it beating in time, fitted last year.

‘My family warned me but I didn’t listen,’ Ms Sharpe said.

‘In February last year at Glenfield Hospital, I had a pacemaker fitted directly into the heart to help my heart function.

‘The pacemaker had to go through a vein in my leg. It was not a nice experience and my kids had to see me in and out of hospital.’

NHS cardiologist and member of campaign group Action on Sugar, Dr Aseem Malhotra, told MailOnline: ‘I see a lot of patients who have palpitations and anxiety attacks which have been caused by energy drinks.

When asked whether he thought a heart block could be triggered by the drinks, Dr Malhotra said ‘absolutely not’.

And he added: ‘There’s no known link to irreversible heart damage. This is likely to be a coincidence.’

As well as her heart problem, Ms Sharpe said she also had kidney stones and came close to developing type 2 diabetes, which can be triggered by eating too much sugar.

Ms Sharpe said: ‘Doctors cannot figure out the cause [of the heart block] but have said that drinking energy drinks has not helped it.’

After having her pacemaker fitted at the age of 32, Ms Sharpe said she now has a ‘new lease of life’.

‘I don’t black out anymore and I can’t feel my heart messing up anymore. My heart used to skip beats.

‘But I do have to go back to the doctors every six months and I have to have the pacemaker replaced every 10 years.

‘I know I shouldn’t drink it anymore, but I have had one energy drink since and I could feel my heart racing, my kidneys hurting and a headache coming on.

‘I thought to myself “I can’t do this anymore”.’

After her health scare, Ms Sharpe said she gets upset seeing other people drinking the cans, particularly children.

‘People do not realise how badly it affects you,’ she said.

‘There is an age limit, but I still see mums buying it for their children. The effects of energy drinks need to be advertised more.’