Mother, 35, reveals how she had half her SKULL removed after suffering a brain aneurysm

A mother-of-two had to have nearly half her skull removed when a brain aneurysm ruptured during a gym workout.

Lisa Ross thought she just had a migraine while bending down to pick up weights during a body-pump class on March 2, 2017.

With the pain soon becoming agonising, the now 35-year-old was rushed to A&E, where doctors detected a brain aneurysm behind her right eye had ruptured.

Mrs Ross, of Cumbernauld, Lanarkshire, went under the knife to stop the brain bleed, only for the swelling to trigger a stroke just two days later.

In an effort to save her life, doctors were forced to remove part of Mrs Ross’ skull to ease the swelling.

Two years on, Mrs Ross, who used to be a customer service agent for the Royal Bank of Scotland, has no peripheral vision and limited mobility in her left hand. 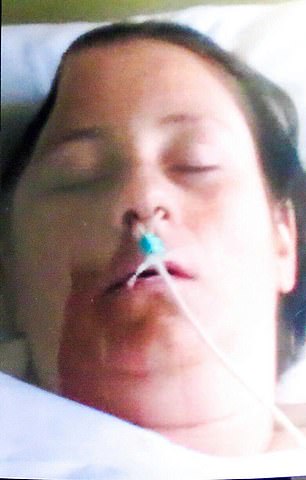 Lisa Ross had to have nearly half her skull removed when she suffered a brain aneurysm during a gym workout. Surgery to stop the bleed triggered swelling that caused her to suffer a stroke just days later. She is pictured right during her ten-day stint in intensive care while unresponsive and left two years on from the ordeal at home in Cumbernauld, Lanarkshire

Speaking of the ordeal, Mrs Ross said: ‘It still baffles me to this day how I went from fine to nearly dying in one week.

‘I was miserable for months afterwards but I really feel lucky now to still be here and it makes me cherish my family and the little things in life even more.’

Following her gym workout, Mrs Ross tolerated her headache for two days before it became so severe she was taken to A&E at Monklands Hospital in Airdrie, North Lanarkshire.

A CT scan revealed she had suffered a brain bleed and Mrs Ross was transferred to a special unit at Queen Elizabeth University Hospital in Glasgow.

Surgeons managed to stop the bleed, only for her to endure a second stroke days later.

On March 10, Mrs Ross underwent a decompressive craniectomy, which involves removing a section of the skull to reduce the build-up of pressure in the head and minimise brain damage.

This section of Mrs Ross’ skull was then placed in her abdominal wall. Although it may sound bizarre, this procedure is often carried out to keep bones ‘fresh’.

Mrs Ross was then moved to intensive care, where she stayed, unresponsive, for ten days.

WHAT IS A BRAIN ANEURYSM?

A brain aneurysm is a bulge or ballooning blood vessel.

This can leak, causing bleeding in the brain, which can be life threatening.

Symptoms of a ruptured aneurysm include:

An unruptured aneurysm may not have any symptoms and could not require treatment.

The causes of brain aneurysms are often unclear.

Treatment may include surgery or medication to restore blood flow and relieve pain.

Her mother Lorna Watson said: ‘I can’t describe the fear. It’s something no parent wants to experience.

When Mrs Ross did come round, she did not even recognise her sons Kalvin, 11, and Connor, five.

Unable to walk, talk or swallow, Mrs Ross was kept in hospital for nearly four months, with her husband Richard, also 35, visiting every day.

‘Richard was incredible – he was there for the kids and Lisa in a way that no man would ever expect to be,’ Ms Watson said.

On April 3, a ventriculoperitoneal shunt was inserted to drain fluid from Mrs Ross’ brain. This fluid went down via a tube to her abdominal cavity, where her body reabsorbed it.

The section of her skull that was removed was then reattached on April 18.

Mrs Ross was finally discharged on June 29 but the ordeal was far from over.

‘I remember coming home and constantly thinking “why me?”,’ she said.

‘There’d be endless days of sitting on the couch doing nothing. This low period lasted for months and months.’

However, her eldest son eventually helped his mother see the positive side of the situation.

‘Kalvin one day said out of the blue, “I’m so glad you made it through this mummy”,’ Mrs Ross said.

‘That was my wake up call. It made me realise life doesn’t stop after a brain injury – it’s simply a new beginning.

‘Realising the support network you have around you, and that you’re not alone and have a purpose encourages you to keep going.

‘My love and appreciation for Richard and the boys has never been greater and I now do everything I can to help others in the same situation.’

Mrs Ross is now back at the gym and working with the charity Momentum Scotland, which provides training and employment services to people with disabilities.

‘I now see a personal trainer who helps me with special exercises for my hand,’ she said.

‘I’m very proud of what I’ve achieved in my recovery which was only possible thanks to the support from my husband, friends and family.

‘I am now focused on moving forward, helping people and cherishing what I have.’ 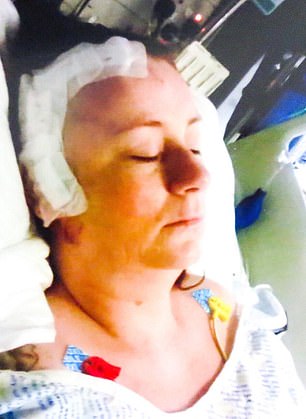 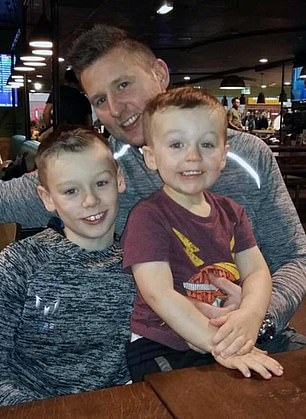 Mrs Ross lay in intensive care covered in ‘tubes and wires, and her head bandaged up’ (seen left). When she woke, she did not even recognise her sons Kalvin, 11, and Connor, five, who are pictured right with their father and her husband Richard Ross, who visited his wife every day